Background: The last outbreak of yellow fever in the city of Barcelona, Spain, was caused by a ship arriving from Cuba. The objective of this study was to describe and analyze the epidemic of 1870 by using the available mortality data.
Methods: The information on 1,235 deaths identified in the parochial registries was analyzed, using statistical and epidemiological procedures for epidemic outbreaks.
Results: Mortality due to yellow fever was 549.7 per 100,000 inhabitants. The temporal distribution of the deaths showed two peaks at the end of September and October with the last fatalities occurring in December 1870. The distribution of the fatalities in the city's neighborhoods was unequal. In La Barceloneta, in particular, more fatalities were found in the streets adjacent to the port than in the most remote streets (r=0.83; p<0.0001).
Conclusions: This study reveals a temporal bimodal mortality distribution for yellow fever during the outbreak, with a high impact in adult men and in the La Barceloneta neighborhood.

Yellow fever is an endemic and epidemic disease transmitted by the mosquito Aedes aegypti through the bite of females infected by a RNA virus named Flavivirus. Currently, yellow fever is spreading throughout several countries of Central and South America, and Africa, where it remains an endemic illness, with severe forms causing very serious liver damage and death. In those areas the disease affects about 200,000 people and causes an estimated 30,000 deaths annually1-3. In 2006, 114 confirmed cases of yellow fever causing 58 deaths were reported by WHO4. Even though the efficacy of yellow fever vaccine is almost 99%, yellow fever is still an important public health problem in developing countries due to underimmunization. In developed countries it is not longer a public health threat; in Barcelona city, the last epidemic outbreak of yellow fever occurred in 18705-8.

Due to geography, Barcelona has always been a commercial port city, with a harbor connecting it to other cities located on the Mediterranean coast, and other foreign countries. Barcelona's harbor trade activity was a vital and decisive element for its development, favoring its settlers to set up contact with other cultures, as well as to exchange political, economic and social ideas. As described by some authors, Barcelona settlers suffered from different diseases and plagues throughout history; yellow fever was one of them9-12 and needs to be contextualized in the various outbreaks of yellow fever that ravaged Europe during the 18th and 19th centuries13-16.

Barcelona, with a surface area of about 2000 square miles, is located almost 100 miles south of the Pyrenees Mountains, at latitude of 41° 23' N and longitude of 2° 11' E, between the Llobregat and Besòs rivers. In 1870, about 225,000 people lived in Barcelona, distributed among four neighborhoods: La Barceloneta, La Ribera, Gòtic, and El Raval17. figura 1 shows a map of the city and the harbor in 1862. Figure 1. Map of Barcelona City in the second half of the 19th century.

As it is now, in 1870 there were two rainy periods in March-April and October-November, a warm period in May-September and a fresh period in December-February. The average precipitation was 22 inches per year, days were predominantly sunny and temperatures were mild. For water storage, the population used large clay and metallic containers that were incompletely covered or closed, allowing mosquitoes to reproduce there8.

The epidemic outbreak started in August 1870, with the first fatality being a waiter of the ship María coming from Havana, Cuba. Pallarés reports: «. that the steam vessel was not inspected and it was permitted to enter the seaport of Barcelona even though there had already been some deaths during the trip. Its load wasn't inspected either; even several animal skins were delivered to a warehouse in Vermell Street».8(p227) The objective of this epidemiological study is to describe and analyze the epidemic outbreak of yellow fever in the city of Barcelona in 1870, using the available mortality data.

Although the outbreak began in August and lasted until December, most deaths occurred between September and November of 1870. The deaths were documented in the parish registries, as the city's East cemetery. According to these records, 1264 deaths were identified with the diagnosis of Typhus Icterodes, Typhus Icteroides, or the acronym Calentura Amarilla5,8 during the period studied (August 1st through December 31st).

For purpose of this study, a database was prepared with the information available for each death: sex, age (in years), marital status (single, married or widow), date, profession, nationality, neighborhood (La Barceloneta, La Ribera, Gòtic and El Raval) and hospital where the deaths occurred (Santa Creu Hospital, the military and the provisional one). The provisional hospital was located in a convent (Las Arrepentidas), 2Km west from the city, and set up to manage the outbreak. Given the lack of information in some registries, there were some limitations to collect and analyze information on each death. Although the total number of deaths from yellow fever was 1,264, only 1,235 were analyzed in this study, since in 29 cases only the day when the death occurred was identified. For the neighborhood of La Barceloneta, the distance between the harbor's dock and the streets where the deaths occurred was also analyzed.

Statistical and epidemiological procedures were used to describe and analyze the epidemic outbreak according to characteristics of person, time, and place18,19. The age and sex population pattern was estimated by linear interpolation from the censuses of 1860 and 187717. Parametric and non-parametric tests were used to determine the specific hypotheses and the program SPSS v13.0 was utilized to analyze data20. The significance level used was 5%. 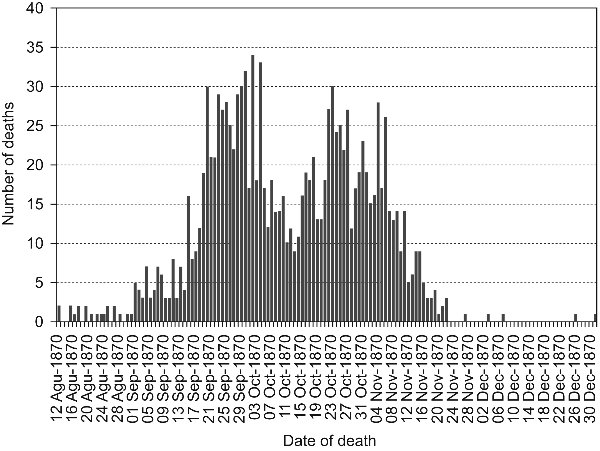 Figure 2. Epidemic curve of the yellow fever outbreak of Barcelona City in 1870.

Regarding the 1,235 cases with any other information besides the day of death, no epidemiological association between temporal distribution of deaths by age, sex or profession was confirmed. The deaths among children under 10 years occurred only between September and November.

The outbreak affected the four neighborhoods of Barcelona. The distribution of the fatalities was as follows: 276 in La Barceloneta, 315 in La Ribera, 93 in Gòtic, and 406 in El Raval. In 145 cases, the place of the death (11.74%) was not reported (tabla 2). In the military hospital, located outside the city, 22 deaths occurred, all men; 16 of them were under age 25. During the outbreak, only 13.7% of all deaths from yellow fever occurred in those hospitals.

The analysis of available information of the deaths from yellow fever in the neighborhood of La Barceloneta showed that the streets closest to the port had greater mortality than the more remote ones (r=0.83; p=0.0001) (tabla 3). 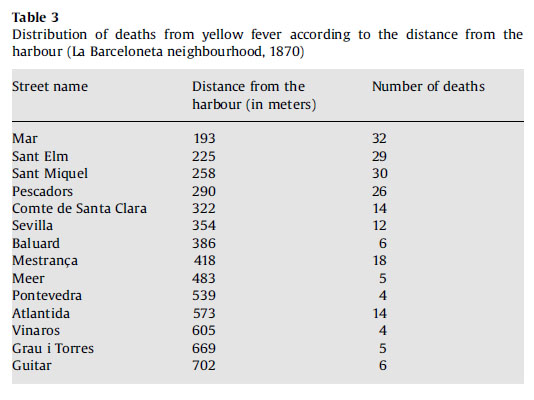 This epidemic was the last outbreak of yellow fever in the city of Barcelona although it was not the last one in the Iberian Peninsula21. It is a good example of an infectious disease transmitted by a mosquito in the urban Mediterranean Europe in the 19th century14,15. Two other epidemics of yellow fever had already occurred in that century in Barcelona (1803 and 1821)11,12,22; other cities in Spain such as Cadiz, Sevilla and Jerez were likewise hit between 1800 and 180321. In Europe, other cities, all located on the coast, were affected in the 19th century by yellow fever: Brest and Saint Nazaire in France, Lisboa in Portugal, and Swansea and Southampton in the United Kingdom13,14,16,23. This study is limited by the fact that there were registered 1,264 deaths, but only 1,235 fatalities with available information such as age, sex or other variables24.

The mortality rate of this outbreak of yellow fever in the city of Barcelona was 549.7 per 100,000 inhabitants. The previous episode of yellow fever in Barcelona had been in 1821, affecting 80,000 inhabitants living inside the city and 25,000 living outside9-12. Considering the yellow fever's lethality, which was between 10% and 50%, the estimated number of patients in the 1870s outbreak would be between 2,500 and 12,350 (up to 5.50% of the Barcelona population), a smaller impact than the episode of 18211,2,13. Both are examples of epidemics produced in European maritime cities as a consequence of the trade with the Caribbean and Latin America. Similarly, in 1870, 665 people died from yellow fever in Havana, Cuba12,25,26; in the same year, a major epidemic of yellow fever occurred in Buenos Aires with 14.000 deaths27.

The epidemic curve, as seen in figura 2, indicates clearly its bimodal form. The first epidemic wave affected the people working in the ship María as well as the people involved in dock activities, especially in the neighborhoods of La Barceloneta and La Ribera, which were the places where the outbreak started. The authorities were not aware of the magnitude of the problem until September, when the outbreak was at its peak. The second epidemic wave of this bimodal distribution seems to coincide with the expansion of the outbreak to the rest of the city8.

The distribution of some neighborhoods in Barcelona in 1870 was similar to the present, yet not exactly the same. For example, in La Barceloneta, located close to the port, the same grid pattern can currently be observed in that neighborhood. In contrast, the Via Laietana Street, which nowadays separates the neighborhoods of La Ribera and Gotic, did not exist in 187029-31, facilitating any type of exchange between them. The outbreak initially affected the neighborhoods of La Barceloneta and La Ribera and then spread to the rest of the city. There were other areas affected outside the city (Gracia and Hostafranchs), but these cases have not been included in this study. In fact, La Barceloneta was evacuated and many of its inhabitants were transferred provisionally to neighboring localities as La Colonia Montalegre, located in Tiana8.

A limitation of this study is the lack of specific census by neighborhood in 1870. The distribution of the yellow fever fatalities during the outbreak was not uniform either within or between neighborhoods. There are records of deaths from yellow fever in 272 streets of Barcelona city in 1870. The fact that no deaths were registered in Las Ramblas Street and the few deaths registered in the neighborhood Gòtic suggests that the low social classes were the most affected. This hypothesis, however, has not been corroborated, given the limited availability of information on this epidemiological event8, although other authors mentioned this fact in the second half of the 19th century32,33. A high linear correlation between a greater mortality in the streets adjacent to the port in the neighborhood of La Barceloneta suggests a higher risk of suffering and dying from yellow fever in the areas nearby the docks; this finding is consistent with the evidence that the mosquito Aedes aegypti rarely moves more than 100 meters34 (tabla 3).

Finally, the cold weather conditions and the appropriate hygienic measures adopted by health authorities, regarding not only the harbor but also the neighborhoods, completely eliminated the outbreak in December 1870. A report was published in 1871-725, and one of its indirect consequences was the acceleration of the expansion of the city with a new neighborhood, called Eixample, planned by the urbanist Ildefonso Cerdá in 18546.

In conclusion, the mortality distribution of the last urban epidemic of yellow fever occurred in Barcelona in 1870 presented a bimodal epidemic curve, with a greater impact in adult men and the La Barceloneta quarter.

To Mrs. Maria Dolors Pau Ramon for her administrative support to this scientific work and to Mr. Juan Chávez for his assistance in collecting the information necessary to carry out this study. To Mr. Martin Barclay for his helpful comments in reviewing this manuscript.