In this article, we propose a new index to measure maternal and child health in the least developed countries (LDCs) of Asia. This new index is applied to a group of countries particularly affected by poverty, which, in the terminology of the United Nations' Conference on Trade and Development, are the poorest of the poor. Our index has been designed by including the variables defined in the Goals of the Millennium Declaration. For this purpose, we used the P2 distance method for 2008, the last year for which data were available. This index integrates variables of maternal and child health that allow territorial ordering of the LDCs in terms of these partial indicators. This analysis is particularly useful in a scenario such as the LDCs of Asia, which are beset by profound social and economic inequalities.

Reducing the number of children who die before the age of 5 years is the fourth Millennium Development Goal (MDG 4). The aim is to reduce mortality in this age group by two-thirds between 1990 and 2015. The fifth goal (MDG 5) is to achieve the same for mothers during pregnancy or childbirth, and specifically to reduce the maternal mortality ratio by three-quarters1.

These problems are particularly serious among high-risk pregnancies and births, especially in developing countries where healthcare systems are still struggling to provide basic public health and maternal and child health services to the population. Most of these deaths are unnecessary and could be prevented by adequate provision of prenatal care, delivery and postnatal care services to women and their newborns2.

The aim of this study was to draw up a synthetic indicator of maternal and child health that would allow comparisons to be made among 10 of the least developed countries (LDCs) of Asia in 2008, using the information contained in a set of social indicators established by the MDGs by the United Nations as a reference. The LDCs are considered to require the highest degree of attention by the international community.

The methodology employed in this study was based on the construction of a synthetic index of the Pena distance method (DP2). The DP2 fulfils the following properties: existence and determination, monotony, uniqueness, grade one homogeneity, transitivity, and neutrality3,-5. In addition to these properties, the indicator solves a large number of problems, such as the aggregation of variables expressed in distinct measures, arbitrary weights and duplicity of information. The Pena DP2 distance method has also been employed in other studies6-8.

The DP2 gives the distances of each country from a "fictitious country" of reference, in which the minimum value would be obtained in the set of social indicators of maternal and child health considered. As we intended to measure the degree of maternal and child health in distinct territories in order to make comparisons, the DP2 contemplates the differences in this item, since in each of the variables the value corresponding to the country registering the lowest value is taken as the point of reference.

The P2 distance is defined as follows:

with j=1,..., m; where m is the number of countries, σj is the standard deviation of country j, and R2j,j-1,...,1 is the coefficient of determination in the regression ofxj over xj-1, xj-2,..., x1. The component xij will reflect the situation of the variable i in country j and dij= xij- xi is the difference between the value taken by the i-th variable in country j and the minimum of the variable in the least desirable theoretical scenario, taken as the point of reference, in a matrix x of observations, of the order "m × n", where n is the number of partial indicators that incorporate information on maternal and child health.

Therefore, a higher DP2 value indicates better maternal and child health, as it shows a greater distance from the "least desired" theoretical scenario, in which the minimum value would be reached in the set of partial indicators considered.

To carry out this procedure, we chose the statistical package R, performed with a computer program designed for this purpose in visual basic, where the algorithm of calculation was implemented.

Finally, to ensure that the properties of the synthetic indicator were fulfilled, variables with a negative relation to maternal and child health were reflected in the matrix of observations, X, with a negative sign.

In our study, the LDCs of Asia for 2008 were applied, by virtue of the detailed statistical information contained in the report on the MDGs9. As already stated, the aim of this study was to draw up a synthetic indicator of maternal and child health and to analyze the disparities present in 2008, taking the MDGs of maternal and child health as the reference. Using the latest available data, we distributed the variables according to the following MDGs: (i) goal 4: to reduce child mortality, and (ii) goal 5: to improve maternal health.

We estimated the power of discrimination of each of the variables considered: Column "Ivanovic-Pena Overall Information Coefficient" (ICi)5 (Table 1). The coefficient therefore indicates the quantity of information provided by the variable and also contains a high volume of new information on the level of maternal and child health. 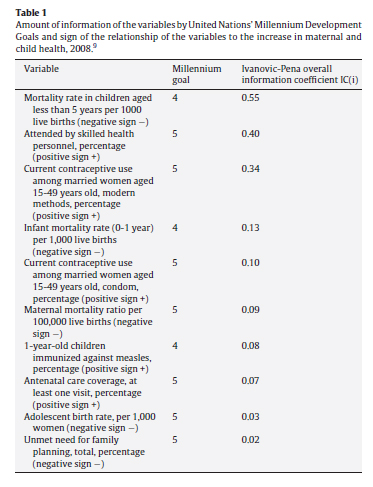 The values of this indicator vary between 0 and 2: if a variable is constant throughout the set of countries, it will have zero discriminating power (IC=0), and the information provided will not be relevant to evaluate the relative levels of maternal and child health. In contrast, if a variable is totally discriminating (IC=2), it provides very important information.

The results show that the country with the best maternal and child health in 2008 was the Maldives in south-central Asia, with a distance of 8.67 from the baseline (Table 2).

In contrast, Afghanistan in south-central Asia and Lao People's Democratic Republic in Southeast Asia, which account for over 10% of the population and almost 34% of the geographical extension of the LDCs of Asia, were among the countries with the worst theoretical situations, showing a distance from the baseline of 0.97 and 2.59, respectively.

Importantly, Bangladesh, which accounts for over 50% of the population, obtained a relatively low position (Table 2).

Our DP2 index of maternal and child health constitutes a novel contribution insofar as it was constructed using a large number of variables and the criteria defined in the Goals of the Millennium Declaration, which are generally considered to determine countries' levels of underdevelopment. This is a quantitative synthetic indicator, which includes the characteristic of multidimensionality to allows comparisons among countries. These conclusions have implications for the development of the aid strategies of international organizations, especially the United Nations. Specifically, these strategies should aim to reduce territorial disparities in maternal and child health in the LDCs of Asia.

The DP2 distance method shows the existence of strongly polarized territorial disparities in maternal and child health in the LDCs of Asia in 2008. Specifically, we found a 7.7-unit difference in relation to the baseline value with the Maldives at one extreme (highest value) and Afghanistan at theopposite extreme (lowest value).

There were significant differences in maternal and child health across countries regarding the value of traditional variables. The variables showing the greatest differences in values among countries were "Mortality rate in children aged less than 5 per 1,000 live births", "Attended by skilled health personnel, percentage", and "Current contraceptive use among married women aged 15-49 years old, modern methods, percentage" (Table 1). The significantly different values of these variables suggest that progress in reducing child mortality and in increasing skilled birth attendance is very uneven among the LDCs of Asia.

Finally, although some encouraging advances have been made in maternal and child health in the LDCs of Asia, faster progress is required to achieve the MDGs. According to Franco et al10, the task facing the region's governments is no doubt a demanding and difficult one that will require the setting of clear priorities. Greater regional and international effort is also needed to achieve the MDGs for maternal and child health in the 4 years remaining until 2015.

J.A. Rodríguez, the main author of the article, gratefully acknowledges the financial support for revision of the English translation and collection of statistical data in international databases, in English and in other languages, provided by the Ministry of Science and Innovation (Spanish Government), within the framework of the VI National Plan for Scientific Research, Development andTechnological Innovation 2008-2011, referen ECO2010-17049 (subprogram ECON).