Psychoactive pharmaceutical residues in the watersheds of Galicia (Spain)

Objective: To monitor the presence of pharmaceutical residues of 14 psychoactive drugs belonging to three therapeutic groups in the watersheds of Galicia (Spain).
Method: Five sewage treatment plants were selected in the main cities of Galicia. Thirteen psychoactive pharmaceutical compounds and one metabolite were chosen. In addition, tap water samples were taken from public places and private residences in the selected cities.
Results: In all the water samples analyzed, the highest concentrations corresponded to the group of anxiolytics. In particular, high concentrations of lorazepam were found in river and tap water samples.
Conclusions: This investigation demonstrates the presence of psychoactive pharmaceuticals in the watersheds of the autonomous region of Galicia and the conversion of metabolites to parent compounds. This work also shows the need to increase environmental monitoring of watersheds and to improve sewage and drinking water treatment processes to remove these pharmaceuticals.

Pharmaceuticals are used for many beneficial purposes in modern society, but commonly constitute pollutants when encountered in the environment1. Sometimes, these compounds are not managed properly and are discharged directly into drains, while at other times they are not completely metabolized by the human body and are excreted via urine and feces in sewage treatment plants (STPs). Pharmaceuticals are not completely removed in STPs and may end up in the environment.

Pollution by pharmaceuticals is recognized as an environmental concern in many countries and has led to an extensive area of research.2 Several therapeutic groups such as anti-inflammatory and cardiovascular drugs, analgesics, antibiotics, steroids and related hormones have been detected in the aquatic environment. In Spain, one of the most widely consumed drug groups are psychoactive pharmaceuticals. The prevalence of the total consumption of tranquilizers and relaxants was 17.4% (10.2% men and 17.5% women) in 2006.3 Several studies have shown the occurrence of this group in the river and tap waters of the Ebro Basin, Llobregat river, Region of Madrid and northwest of Spain.4-8

The occurrence of pharmaceuticals in the environment leads to various unanswered questions with regard to their biological potency in flora, fauna, and humans.2 Very few data are available on the presence of pharmaceuticals in point-of-use drinking waters, partly due to the belief that modern treatment processes will remove pharmaceuticals from potable supplies. Although the risks associated with exposure to drugs are probably most significant with regard to the natural environment, the public's concern is understandably more focused on human exposure.9

The aim of this study was to monitor the presence of 14 psychoactive pharmaceutical residues belonging to three therapeutic groups in Galicia's watersheds.

Five STPs were selected, one for each of the five main cities in Galicia: A Coruña, Ourense, Pontevedra, Santiago de Compostela and Vigo. For confidentiality reasons, the citation order of the cities does not reflect the numeration of the STPs (Table 1).

STP1 and STP5 discharge into surface waters of the basins of Galicia-Coast and Miño-Sil respectively, and the remainder (STP2, STP3 and STP4) discharge directly into the sea. The sampling stations were carefully selected in order to produce consistent and representative results for the final interpretation of data. Pharmaceuticals were analyzed in the influent and effluent water from all STPs and also 50 meters downstream of the emission points of STP1 (DSSTP1) and STP5 (DSSTP5). Thirty-six grab samples were collected in three campaigns: August 2008, January 2009 and June 2009. One sample for each campaign was taken from each sample point. Seventy-five tap water samples were also taken from public places and private residences of the cities selected in the same campaigns as the wastewater and river water samples. Five samples for each campaign were taken in each city.

Thirteen pharmaceuticals and one metabolite were chosen because of their potential toxicity and persistence in the environment. The pharmaceuticals analyzed are used as medications for the central nervous system and belong to three of the most frequently prescribed therapeutic groups: antidepressants, anxiolytics and antiepileptics. The method described in the literature and used by Gros et al.5 was chosen for sample extraction and instrumental analysis.

Of the 14 psychoactive pharmaceuticals analyzed, 12 were detected in the wastewater samples of the STPs studied. However, in some STP samples the concentrations were below the limit of quantification.

Most of the pharmaceuticals studied showed elevated concentrations in effluents and in some samples the concentrations found in the effluents were higher than those detected in the influents.

The average concentration of venlafaxine detected in effluent samples was similar to that reported in other works.7,11 However, lorazepam was found in higher concentrations than in other studies. Coetsier et al.12 reported lorazepam levels of up to 200ng/L in treated sewage. In river waters, the concentration of lorazepam was higher than that reported in the literature (40ng/L). An important aspect to highlight is the deconjugation phenomenon that may occur in STPs. In some samples, the increase in pharmaceuticals in effluents was demonstrated to occur due to conversion of glucuronides and other conjugated metabolites to the parent compound by enzymatic processes taking place in the treatment plant.10

The presence of lorazepam in drinking and tap waters has not been studied in other works. The high concentrations detected in some tap water samples probably indicate that lorazepam is not eliminated by advanced drinking water treatments. In some cases, anxiolytics are subject to illicit use by the population because of their properties13 and are also common in veterinary treatments.10 Benzodiazepines are also used in stockbreeding, an important sector of the Galician economy, and therefore this source should also be considered.

Several studies have shown that the likelihood of acute effects of such low pharmaceutical concentrations in drinking water is very low.7,9 However, little is known about the possible long-term effects of continuous exposure to low concentrations of these pharmaceuticals. Some authors suggest that although the consequences in healthy adults would be negligible, in the young or elderly these effects might be more pronounced due to reduced ability to remove toxic compounds from their bodies. In addition, in particular conditions such as allergies to certain compounds or vulnerable life stages such as pregnancy the possible effects could be more important.9,14,15 However, these affirmations do not constitute proof because there are insufficient studies in tap water exposure.

The results obtained in this study are representative of the watersheds of the autonomous region of Galicia but may not be extrapolable to river and tap water from other areas. Another limitation are the point measurements. A continuous monitoring system would have been desirable to detect these compounds in higher concentrations. Finally, the design of this investigation did not allow assessment of potential risks to public health.

To conclude, this study demonstrates the presence of psychoactive pharmaceuticals in the watersheds of the autonomous region of Galicia and shows conversion of metabolites to parent compounds. This work also highlights the need to increase environmental monitoring of watersheds and to improve sewage and drinking water treatment processes to remove these pharmaceuticals. 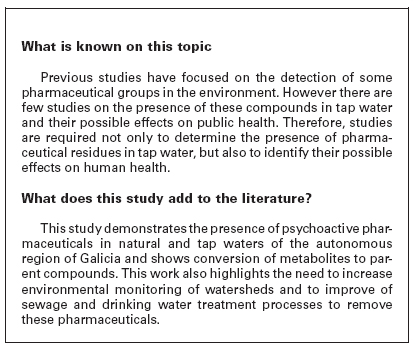 This research was co-directed by Y. Valcárcel and M. Catalá and was performed by S. Esteban. The sampling design, sampling and analysis of the pharmaceuticals were performed by the Laboratory of Analysis and Environmental Quality (CIS) under the direction of M. González Castromil. All the authors contributed to drafting the manuscript and have approved the final document.

7. Valcárcel Y, Alonso SG, Rodríguez-Gil JL, et al. Analysis of the presence of cardiovascular and analgesic/anti-inflammatory/antipyretic pharmaceuticals in river- and drinking-water of the Madrid Region in Spain. Chemosphere. 2011; 82:1062-71.