Factors associated with edentulousness in an elderly population in Valencia (Spain)

This study was funded by the Directorate General for Public Health of the Health Ministry of the Valencian Regional Government. Principal researcher: Dr. José Manuel Almerich-Silla. (20060970).

Objective: To determine the prevalence of edentulism and its association with various socioeconomic factors and oral health habits in the population aged 65-74 years old in the region of Valencia.
Methods: A cross sectional study was designed. Thirty-four primary health centers and five nursing homes were chosen at random in the region of Valencia (10-15 voluntary participants per sampling point). Clinical examinations were carried out by three calibrated dentists (kappa>0.85) in the same centers. The total sample consisted of 531 individuals (235 men and 296 women).
Results: The percentage of toothlessness was 20.7% and the mean number of natural teeth present was 14.92. The prevalence of edentulism was significantly higher (p <0.05) in men, institutionalized persons, those with no schooling, those with poor oral hygiene, those who visited the dentist regularly and those living in peri-urban/rural areas. In a multivariate logistic regression model with edentulism as the dependent variable, the following factors were identified as significant independent variables: institutionalization (odds ratio [OR]=2.88), poor oral hygiene (OR=2.35), regular visits to the dentist (OR=2.34) and age (OR=1.19).
Conclusion: Edentulousness is a complex phenomenon that involves distinct social and economic factors.

Aging of the world population is leading to a major readjustment in social and health services in most of the developed world. In Spain, and specifically in the Spanish region of Valencia, the demographic aging of recent decades is graphically demonstrated by population pyramids, where the over-65-year-olds already represent more than 16% of the total.

In the autonomous region of Valencia, as in the rest of Spain, dental care has traditionally been almost entirely private. For decades, the public health service confined itself exclusively to diagnosis and pain-relief: medicines and extraction. Any other treatment had to be arranged with a private practice and paid for by the patient. It was not until the 1980s that the public health system began to include dentistry to a certain extent, focusing above all on the child population. For this reason, there is a great lack of official programs to promote oral hygiene and dietary habits among the older adult population, which is therefore at greater risk of tooth loss.

Total tooth loss is the variable most often used to gauge the oral health of the elderly. As a result, it is possible to compare how the prevalence of toothlessness has evolved in many countries through the publication of epidemiological data over the years. Although not highly explicit, this variable nonetheless expresses oral status during the final stage of a lifetime.

Analyzing the causes that lead individuals to lose all their teeth is a complex, multifactorial task involving many objective data (caries, periodontal disease, traumas, iatrogenic effects), as well as factors that are subjective but no less important (ethnic and cultural factors, sociocultural level, diagnoses, uncertainty in therapeutic assessments).1

What is certain is that toothless people have lost an important bodily function, with major repercussions for their general health and their relationship with their environment that can affect their quality of life and cause psychosocial and even emotional problems.2,3

A person with total tooth loss is one whose masticatory function is deficient or non-existent, entailing serious nutritional problems.4

Various factors are related to tooth loss. All information that leads to a better understanding of the factors associated with edentulism is important to enable the authorities and oral health professionals to plan and provide appropriate dental services for the elderly.

The objective of this study was to determine the percentage of edentulism in the older adult population of the region of Valencia in Spain and to assess its association with the distinct variables involved, such as age, sex, educational level, institutionalization, place of residence, regular visits to the dentist, smoking and alcohol consumption.

A cross sectional study was designed to be representative of the 65-74-year-old population of the region of Valencia. The sample size was calculated, taking into account the prevalence of edentulism in Spain, for a level of precision of 0.035. The sample was obtained from primary healthcare centers and nursing homes.

Between 10 and 15 individuals aged between 65 and 74 years were examined per sampling point. In primary care centers, individuals who were attending for reasons other than oral/dental disease were included. Individuals in these centers were invited to participate in the study voluntarily and with no reward except for a dental examination. In nursing homes, participants were selected at random from the total number of residents recorded in each residence. All individuals were volunteers. The refusal rate was low (<15%). The examinations were carried out in November and December 2006 in the same sampling points.

The form employed to record the information from the questionnaire and the oral examination of each participant was custom-designed, based on the assessment form model recommended by the World Health Organization,5 adapted to the variables analyzed. The questionnaire was administered by the examiner while performing the dental examination.

Three dentistry graduates were selected to conduct the field work after calibrating them against a standard examiner, following the World Health Organization's guidelines. The kappa index of inter-examiner agreement was above 0.85.

The relationship between edentulism and the mean number of teeth present and a number of socio-economic variables and dichotomized oral health habits was studied:

• Educational level: three categories were established. The maximum level of education attained was classified into "no schooling" (illiterate), "primary" (basic schooling) and "higher" for those with vocational training qualifications, the baccalaureate or a university diploma or degree.

• Smoking: classified as "yes" when the patient currently smoked or had given up smoking less than 2 years before.

• Alcohol consumption: classified as "yes" when the patient consumed at least one alcoholic drink every day.

• Visits to the dentist: classified as "yes" when the patient had visited the dentist at least once a year for the past 5 years.

This study was approved by the Ethics Committee of the Faculty of Medicine and Dentistry of the University of Valencia, Spain, and was conducted in accordance with the recommendations of the Declaration of Helsinki. All the participants signed an informed consent form.

Statistical analysis of the data was performed with a statistics program (SPSS 15.0®). In the univariate analysis, Student's t-test was used to compare the means of the number of teeth present (including edentulous people) and a chi square test was used to compare the percentages of edentulism. In the multivariate analysis, a logistic regression was also performed with edentulism as the dependent variable and the study variables as the independent variables, using the forward stepwise (Wald) method and the Hosmer and Lemeshow goodness-of-fit test for the adjustment of the model. 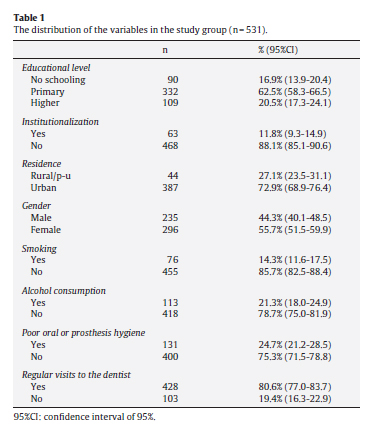 In the univariate analysis, the following variables were significantly associated with edentulism (p <0.05 in the chi square test): no schooling, institutionalization, rural residence, male gender, poor oral hygiene and regular visits to the dentist (Table 2). The mean number of teeth present was 14.92 (95%CI: 14.06-15.78). The number of teeth present was significantly lower (p <0.05 Student's t-test) in participants who had no schooling, were institutionalized, resided in a peri-urban/rural area, were male, had poor oral hygiene and made regular visits to the dentist (Table 3). 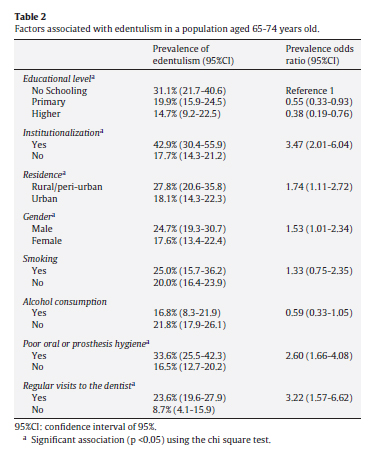 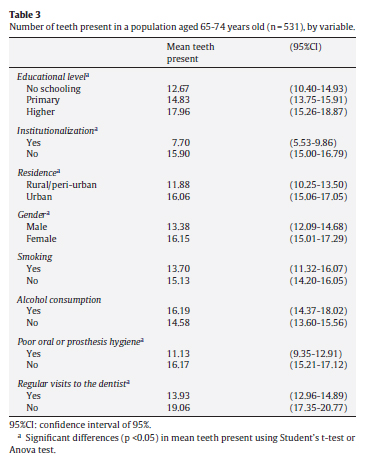 In the multivariate logistic regression model with edentulism as the dependent variable (Hosmer and Lemeshow's goodness-of-fit test, p=0.283), the variables significantly and independently associated with edentulism were institutionalization, poor oral hygiene, regular visits to the dentist and age (Table 4). The ROC curve, with an area under the curve of 0.74, is shown in Figure 1. 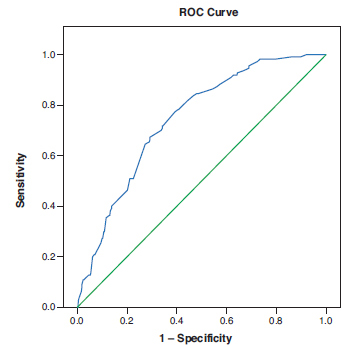 Figure 1. ROC curve of the model.

One of the main biases of a cross sectional study is selection bias in the sample. In this study, given the health centers sampled and that the percentage of individuals aged 65-74 regularly using public healthcare is 90%, according to health survey of the Valencian region in 2005, we believe that the sample was representative of the population.

A number of studies have documented reductions in edentulism in different European countries (at least in those for which data are available), with considerable differences in the percentage of edentate individuals being reported in each.7, 8

Comparison between the present results and those of studies from other countries must be approached with caution, as many were conducted in cohorts covering greater age ranges, such as the population aged 60 or over.9, 10 When comparison is limited to the 65-74-year-old age group, the prevalence of edentulism in this study is higher than in countries such as China (11%) but is far lower than in others such as the United Kingdom (46%).

Turning to other European countries, in Sweden the percentage of toothless persons recorded in a sample of men and women11 was slightly higher than that in the present study. In Lithuania, a prevalence survey carried out at the end of the 1990s in persons aged 65 to 74 years old showed that only 15% were toothless.12 In France, in 1995, 16.3% of the 65-74 year-old population were edentulate.13

The present study corroborates the results of previous research in which the greater the age of the study population, the greater the proportion of persons with total tooth loss.14, 15 This is understandable, since oral diseases, particularly dental caries, have a natural cumulative tendency.

In agreement with previously-published studies,16,17 the prevalence of edentulism was higher in peri-urban/rural areas (27.8%) than in urban areas (18.1%).

In the present study, the factor that showed the greatest association with tooth loss was institutionalization. A number of previous studies have found that elderly persons who lived in an institution generally had worse oral health and a higher percentage of edentulism.18,19

According to the Adult Dental Health Survey carried out in the United Kingdom in 1998, the factors with the greatest influence on toothlessness were age followed by educational level.23 Consequently, although general falling, edentulism would appear to be concentrated in particular risk groups.20

Ascertaining oral health habits (visits to the dentist, oral hygiene, smoking and alcohol consumption) through questionnaires can yield highly slanted results because, out of courtesy, interviewees tend to give answers that are closer to what is considered socially acceptable than the real situation. Additionally, the methods and samples employed by the various studies on this subject are not always comparable (different sample sizes, questions asked or target population age range).

Regular dental visits have been associated with a reduced risk of tooth loss.25 In the present study, however, the mean number of teeth present was lower in patients who visited the dentist regularly. This finding could be because the dental services were being used for extractions or prosthetic treatment rather than preventive care by this group of older people.

The literature describes habitual smoking as being strongly associated with total tooth loss.26-28 Some studies have calculated that habitual smokers have a 20% greater risk of tooth loss than persons who have never smoked.29 In this study, smoking was not a significant factor in edentulism, even though non-smokers had a greater mean number of teeth present than smokers.

In agreement with the present study, other studies have found that habitual drinking did not show a significant association with total tooth loss.27

All the variables described above confirm the association of social and economic factors with edentulism in the adult population of the Valencia region aged between 65 and 74 years. To reduce edentulism, measures to improve oral hygiene habits will need to be accompanied by social and cultural measures. 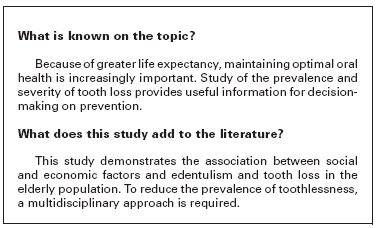 8. Müller F, Naharro M, Carlsson GE. What are the prevalence and incidence of tooth loss in the adult and elderly population in Europe. Clin Oral Implants Res. 2007; 3:2-14.

22. Nalçaci R, Erdemir EO, Baran I. Evaluation of the oral health status of the people aged 65 years and over living in near rural district of Middle Anatolia, Turkey. Arch Gerontol Geriatr. 2007; 45:55-64.