In this study, we analysed if the age at onset has changed during the last two decades in patients with type 1 diabetes in Navarre (Spain). The subjects of the study are the 716 patients (413 men and 303 women, 280 <15 years and 436 >15 years) with type 1 diabetes diagnosed between 1990 and 2008, that have been treated in the Navarra Hospital Complex. Patients with LADA (positive antibodies but insulin dependency >6 months after diagnosis) were excluded. There have been no changes in the admission policy of the hospital or in the uptake area during the study period. To assess the evolution of overweight at onset, we calculated the yearly proportion of patients over 85th percentiles from Carrascosa's normal body mass index (BMI) distributions for Spanish population.5

To assess the relationship between age at onset and calendar year, we used General Additive Models (GAM). As GAM models showed a linear trend (1 degree of freedom), we additionally adjusted linear regression models with age at onset as dependent variable, and calendar year and BMI as explanatory variables. In the case of children, as normal BMI is different for sexes and changes with age, BMI values were translated into their corresponding percentiles form Carrascosa's distributions.

This study was approved by the regional Ethical Review Board of Navarra. 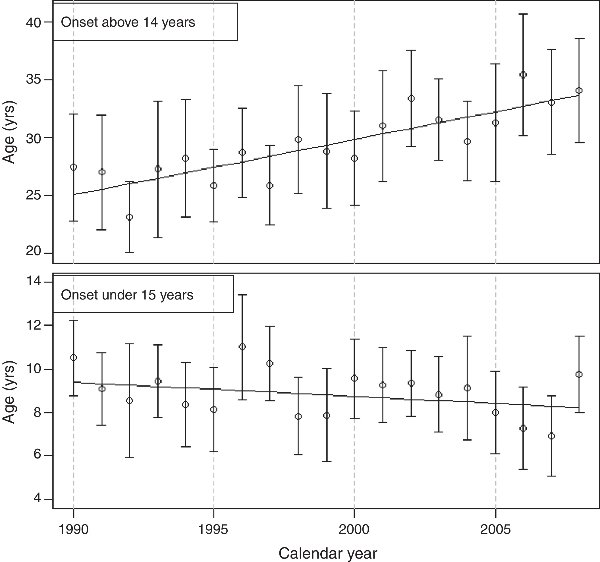 We did not find significant differences between males and females in the average age at onset or in its evolution along the study period.

Although high-risk HLA genotypes is a predictor for diabetes progression, we have not made statistical adjustments for other covariables as family history of diabetes, because previous studies dealing with this item, have found that BMI, body size and insulin resistance are the most important factors influencing the age at onset.2

The delay in the age at onset seen in patients >15 years of age could be reflecting an actual epidemiological change in type 1 diabetes onset, but also may be the result of higher accuracy in the diagnosis of type 1 diabetes in adults. Further research is needed in order to clarify this issue.

L. Forga has written the article, especially Introduction, Discussion and References. He has approved the final version. M.J. Goñi has thought up this study. She has collaborated redacting the whole text, and she has approved the final version. K. Cambra and B. Ibáñez have designed the study methodology and they have made the statistical analysis of the data. They have also approved the final text. D. Mozas has been collecting the data. He has made the table and he has checked and discussed the article, especially the results in order to approve the final version. M. Chueca has participated collecting data in paediatric patients, reviewing the text, particularly the sections dealing with patients less than 15 years, and she has given her approval to the final text.