Evaluation of compliance with the self-regulation agreement of the food and drink vending machine sector in primary schools in Madrid, Spain, in 2008

By the start of the 21st Century, one in every three Spanish children were overweight or obese, a threefold increase in just two decades.1 In Madrid, the prevalence of overweight plus obesity among population 2-24 years old was 27.5% in year 2000.2 To stop this harmful trend, in 2005 the Spanish government launched the National Strategy for Control of Obesity (NAOS-Nutrición, Actividad, Obesidad y Salud).3 The NAOS Strategy aims to encourage a healthy diet and regular physical activity through interventions in school-, healthcare-, industry-, family-, and community-settings, with special emphasis on children. At the industry level, the Ministry of Health and Consumer Affairs (MSC for its acronym in Spanish) signed six agreements of voluntary collaboration with the private sector during the very first year of the strategy, a strong show of support for a self-regulating food and marketing industry.3

As the soft-drink industry has drawn on schools to encourage soda consumption among children, governments around the world are taking action to limit the availability of soft drinks in schools.4 This action is particularly relevant taking into account that in countries where vending machines are frequently placed in schools 20% of children drink more than four soda drinks a day.5

Along these lines, MSC established a collaborative agreement with the National Association of Vending Machines of Spain (ANEDA for its acronym in Spanish) in which the association made the following commitments6:

• No placement of food and soda vending machines in areas of easy access to primary school students.

• Inclusion of products contributing to a balanced diet, at the expense of those with high salt-, sugar-, and/or fat-content.

• Collaboration in children"s nutritional education by creating and disseminating the "Guidelines for an adequate nutrition in learning centers through vending machines".

The aim of this study was to evaluate the compliance of the self-regulation agreement of food and drink vending machines sector regarding primary schools in Madrid.

It was a cross-sectional study of all registered primary schools -public, private and partially state-funded- in the directory of Madrid, based on data obtained from January to May of 2008. Public primary schools differed from private ones; in that students of secondary level are housed in a different building, whereas in private and partially state-funded schools they are in the same one, but in separate yards. Through a telephone interview, we asked about the presence of vending machines at schools. The rest of the information, including the degree of accessibility to the machines by primary school students, products offered, adverts or health-promotion messages, and the degree of knowledge regarding the agreement and the nutritional guidelines, was collected during visits to all schools reporting having vending machines by means of visual inspection of the machine(s) and in-person interview with the school"s headmaster or the person in charge of the nutritional planning. The type of products classified as healthy were water, milk or yogurt, for drinks, and sandwiches, cereal or fruit, for foods. We calculated the number of machines offering some healthy product -food or drink- and the number whose healthy foods and drinks represented more than 10% of the products offered.

We used STATA statistical software package to run frequencies on the variables of interest. Percentages of vending machines by type of school were compared using Chi-square test.

We were unable to perform the in-person machine inspection or the personal interview to collect data on compliance with the agreement for three schools. Of the remaining 29 schools none knew of the agreement between MSC and ANEDA or about the "Guidelines for an adequate nutrition in learning centers through vending machines." A total of 23 machines (79.3%) were fully accessible to primary school students (playground, hallways, and lobbies), 11 machines (37.9%) had food advertising on the outside, and none had healthy eating habit messages. Twenty-two machines (75.9%) offered some healthy alternative, but 17 (58.6%) did not offered a healthy product or healthy choices did not exceed 10% of the products sold, leaving the remaining selections to be all high in salt, sugar, and/or fat (table 1).

From the subsample of 70 schools with no vending machines at the time of the study, 6 (8.6%, 95% CI: 1.3-15.8%), all private whether partially state-funded or not, reported having had machines before the agreement. Again, none of them knew of the agreement. In two cases, machines were removed due to the perception that they encouraged unhealthy eating habits. The other four schools removed them due to low profitability.

We found a low prevalence of vending machines in Madrid's primary schools. In fact, none of the schools having machines reported knowing the agreement or the nutritional guidelines resulting from the agreement. All the schools with machines were private and offered both primary and secondary level education. Most of these machines did not comply with the agreement regulations regarding its location, the messages posted on them, or the nutritional value of the choices offered.

At the international level, the observed trend in primary schools is also toward lower prevalence of vending machines but they are still disproportionately packed with mostly high-calorie, low-nutrient-dense foods.7 Consumption of these foods, and soft drinks particularly, increase obesity risk from early childhood.8 In Madrid, one of every three public secondary schools have vending machine,9 drawing the attention to the fact that secondary schools were not considered in the agreement between MSC and ADENA. The separation between primary and secondary school in the Spanish public school system offers certain protection to the youngest, but leaves the door open for vending machines packaged with products high in salt, sugar, and/or fat to continue being available at public secondary schools. As consumption of sugary drinks is associated with increased availability of vending machines in schools5 and replacement of sugar-containing beverages with healthier drinks has shown to reduce weight gain and fat accumulation in normal-weight children,10 the prohibition of packaging vending machines with high-calorie, low-nutrient dense processed foods, both in primary and secondary schools, could make a significant contribution to the control of the obesity problem among scholars in Madrid.

Due to the substantially higher profits yielded by selling high-calorie, low-nutrient dense processed foods than fresh products, the incompatibility between food industry and public health interests is visibly obvious.11 Not surprisingly then, food industry"s tactics to influence regulatory mechanisms, e.g., strongly opposing governmental regulation and promoting instead self-regulation through voluntary agreements, mirror those previously used by the tobacco and alcohol industries, which proved ineffective and harmful for the public"s health.12-14 Similarly, self-regulation of food advertising targeting children has shown to be ineffective at national15 and international level.16 The observed futility of self-regulation of vending machines provides further evidence that food industry's staunch defence of self-regulation, far from providing value to public health, is a strategy to avoid stricter regulation. The recent recommendations of the Health Ministry and Health Regional Authorities for food in schools seem clearly insufficient.17 Unlike the School Food Standards Regulation, that applies to all food and drink provided by schools in the UK,18 their nutritional criteria for vending machines products are not in line with WHO nutritional recommendations ("to avoid school stockouts", they declare) and compliance remains voluntary.

Our study included all schools -public, private and partially state-funded- of Madrid City with vending machine, and a random sample of schools without machine. Other strengths include the capacity to contact the headmaster or the person with knowledge of this subject and being able to visit the schools with vending machine. However, the sample of schools used to estimate the presence of vending machines before the agreement was limited in size and the survey regarding the reasons to remove the machines was a non-structured one, so these results must be taken with caution.

To help in the battle against the obesity epidemic, we recommend governmental regulations to require all food and drink products offered in schools meeting healthy nutritional criteria, according to current national and international evidence based nutritional recommendations.

Editor responsible for the article

M.A. Royo-Bordonada designed the study and M.A. Martínez-Huedo collected the data. Both authors were involved in data analysis and interpretation, writing the paper and had final approval of the submitted and published versions.

The authors thank Pilar Martínez Huedo for her collaboration in having access to the information, and Hosanna Soler Vila for her assistance translating the final version. 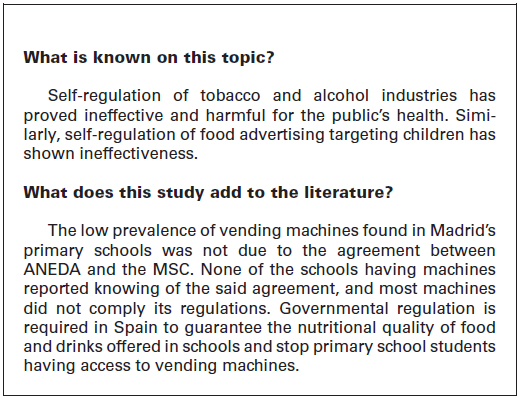 SciELO Analytics
Dimensions
Evaluation of compliance with the self-regulation agreement of the food and drink vending machine sector in primary schools in Madrid, Spain, in 2008
PlumX