This project was funded by the Instituto de Salud Carlos III, Government of Spain (RTICC RD06/0020/0089) and the Ministry of Universities and Research, Government of Catalonia (grant 2009SGR192).

Road traffic injuries are a major public health problem; they are responsible of a great number of years of potential life lost being the ninth cause of mortality and morbidity around the world.1

Several of the traffic injuries could be prevented by modifying certain drivers' behaviours. The use of safety belt is considered one of the most effective passive systems in preventing traffic injuries. It reduces up to 75% of the mortality in head-on collisions.2 Non-use of safety belt is associated with more serious injuries in traffic collisions.3 Moreover, mobile phone use while driving is also associated with an increased risk of traffic collisions.4,5

The objective of this study was to estimate the prevalence and correlates of safety belt and mobile phone usage in vehicles in the city of Barcelona.

We conducted a cross-sectional study in the city of Barcelona in 2011 on the use of seatbelt of all occupants of the vehicles and use of mobile phone of drivers during a moment of the trip, through direct observation (n = 2,442 vehicles). The methodology of this study has been previously described.6,7 In brief, we selected 40 public roads (4 per district) and a traffic light was selected as point of observation, from where a trained observer conducted the direct observation of the vehicles. The observations were made when the traffic light was red for vehicles. We systematically selected the first two vehicles in the adjacent lane to the observer. We excluded adjacent lanes when they were exclusive for buses and bicycles. The study included all private cars, commercial vehicles, and taxis.

The driver's variables were: use of the safety belt (yes/no), use of the mobile phone or its manipulation with the hands to talk or to send a text message during a moment of the trip (yes/no), approximate age (18-34/35-64/>65 years old) and sex (man/woman). We only included the use of handheld mobile phone, excluding the use of headset and hands-free mobile phones. Passengers' variables (front seat and rear passenger) were only: total number of passengers (excluding the driver) and number of passengers using the safety belt. We also collected contextual variables (time and number of lanes of the public road).

We calculated the prevalence rates and used chi-square test to compare those rates among drivers. We also fitted logistic regression models to obtain the adjusted odds ratios.

There was a statistically significant difference in the prevalence of drivers who were not wearing safety belt according to age in all vehicles (p = 0.001), particularly in private cars (p = 0.007). In the bivariate analysis, only the variables age (≥65 years old) was significantly related to non-use of safety belt in private vehicles (Table 1).

Table 1. Prevalence, crude and adjusted Odd Ratios for non-use of safety belt
by drivers in private cars by sex in the city of Barcelona, Spain (2011).

The prevalence of use of mobile phones while driving during a moment of the trip was 3.8%. It was higher in private cars (4.1%), in women (5.5%), and when the drivers were alone (5.2%). There was also an inverse trend of the prevalence with age (p for trend < 0.001) (Table 2). Bivariate logistic regression models showed the mobile phone use while driving was higher when the driver was a woman, had an age range of 18-34 years old, when drivers were alone, and the vehicle type was a private or commercial one (Table 2).

Table 2. Prevalence, crude and adjusted Odd Ratios for mobile phone
use while driving during a moment of the trip by sex in the city of Barcelona, Spain (2011).

The prevalence of non-use safety belt and use of mobile phone during a moment of trip according to type of vehicles are shown in table II and III of the Appendix in the online version of this article.

The prevalence of passengers not wearing the safety belt in the rear seat of vehicles was noticeably higher than the prevalence observed in drivers and front seat passengers in the urban area of Barcelona.

The prevalence of drivers not wearing the safety belt observed in our study is lower than those reported in Italy8 and England9 studies, using also direct observation (24.3% and 15.3%, respectively) and even lower if compared to data obtained by questionnaires in 2002 in Spain.10 At that time, before of the introduction of the penalty point system,11 the prevalence of non-use of safety belt in the urban area was 40% among drivers, 45% among front seat passengers, and 80% among some of the rear passengers.10 As in Spain the use of safety belt is not compulsory among taxi drivers in urban streets and roads,11 the figure of the non-usage that we observed could be understandable. But is not the case of the taxi passengers, for whom its use is always compulsory. However, we found that taxi passengers, either front seat passengers or rear passengers, used less the safety belt than private and commercial vehicles' occupants (table I of the Appendix).

The prevalence of mobile phone usage while driving during a moment of the trip in our study was similar than those observed in other European8,9 and Spanish12 cities, as derived from studies with a similar direct observation design (prevalence between 2.5% and 4.5%). In Michigan (USA), Eby et al.13 found that the mobile phone use while driving increased from 2.7% in 2001 to 5.8% in 2005. However, we found a similar prevalence in a study conducted in Lleida (a median-size Spanish city) in 2002 (3.3%), before the introduction of the Spanish penalty points regulation.11 The lower prevalence in our study could be partially explained because the General Traffic Directorate conducted eight campaigns to prevent distractions while driving between 2008 and 2011.14 These campaigns included media coverage (TV, radio, newspapers, etc.) of the risks associated to the use of the mobile phone while driving and the surveillance of the non-use of the mobile phone while driving.

The main limitation of this study derives from the inherent observer bias, specifically with the age variable, as people can look younger or older than they actually are. However, the pilot study7 carried out by two independent observers showed an almost perfect agreement in the observation. The prevalence rates of mobile phone use while driving could also underestimate by the inability of the direct observation during a stop at the traffic light to monitor the entire trip of the driver, who could have used the mobile phone at any time or even do more than one call during the trip. One study conducted in Spain with self-reported information showed that 15.1% of drivers between 18 and 64 years old used the mobile phone while driving regularly or fairly often in the last 30 days.15 A strength of an observational study like this compared with studies based on self-report is the objectivity in the information, free of information bias, that could occur with self-report. Our data could also underestimate the actual prevalence because we did not make direct observations during nights and weekends when many of unsafe driving behaviours occur such as alcohol use while driving.

In conclusion, public health policies should improve interventions focusing on increasing the use of safety belt to reduce the road traffic injuries, particularly among rear passengers. Furthermore, we recommend the launch of campaigns addressed to surveillance the compliance of the non-use of mobile phone, particularly among women and young people, and to increase the awareness of risk and risk-taking behaviours while driving.

We acknowledge the collaboration of Dr. Ángel López Rodríguez for providing "la Araña de Tráfico" of the city of Barcelona. 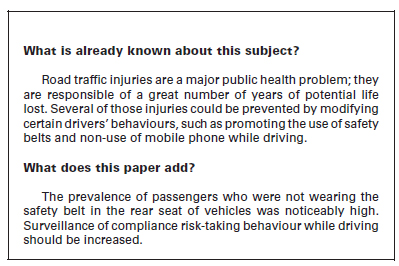 7. Martinez-Sanchez JM, Curto A, Fernandez E. Agreement between two observers in the measurement of smoking and use of safety belt and cell phones in vehicles. Gac Sanit. 2012;26:91-3.