This article has been funded by the research fund of the Departamento de Biología de Sistemas.

Background: Directive 2004/24/EC, which came into force in 2011, created new regulatory requirements for traditional herbal medicines (THM). This study compared the Spanish THM registry before and after the Directive came fully into force in 2011.
Methods: We consulted the herbal medicinal plant and drug catalogues (General Council of the Official Colleges of Pharmacists), the website of the European Medicines Agency (EMA), and retail web sites.
Results: Of 315 THM (from 39 companies) licensed in Spain in 2010, only 48 (10 companies) remained licensed in 2013, mainly due to their withdrawal: the EMA had received just 123 applications from Spain and at least 34% formerly licensed THM had shifted to the less strictly regulated food sector, while up to 54% might have disappeared from the market. However, there is still a significant presence of retail websites making illegal health claims.
Conclusion: In Spain, the public health benefits of the Directive 2004/24/EC might be less than expected.

Ten years ago, the Directive 2004/24/EC (the Directive) established a regulatory framework for traditional herbal medicinal products. The Directive, which came fully into force in Spain on 1 May 2011, requires these products to meet specific and appropriate standards of efficacy, safety and quality to protect public health1. In order to simplify the nomenclature, we will use along this article the term "Traditional Medicines" (TM) to refer to both the old and the current licensing categories of traditional herbal medicinal products.

The Directive provides for a special simplified registration procedure for TM. But actually it creates significant new regulatory requirements because manufacturers have to prove that their products have been made to strict standards of safety and quality. The resulting new costs to manufacturers might result in loss of the commercial viability of individual TM so that there might be fewer TM on the market and a smaller range. This work compares the register of TM in Spain before and after the Directive came fully into force in 2011.

We studied the effect of the Directive on the register of TM in Spain by comparing the number of TM licensed under either the former legislation (years 2005, 2006 and 2010) or the Directive (years 2011, 2012 and 2013). These data were obtained respectively from the catalogues of Medicinal Plants2-4 and Drug and Medicinal Products (Botplus version)5 published by the General Council of Official Colleges of Pharmacists. Two researchers (from NTG, CGP, ENA and JBE) extracted data independently from each annual catalogue. The extracted data were cross-checked by the authors, and any discrepancy was resolved by discussion with a third author (FJLC).

The data of 2011 and 2013 on Traditional Use Registrations from the European Medicines Agency (EMA)6,7 were analyzed by two researchers (CGP and JBE) in order to make an estimate of the number of former TM which refused to apply for a marketing authorisation under the Directive. In this connection, a further study was undertaken for making an estimate of their possible commercialization in the food market through i) searching in the catalogues of the General Council of Official Colleges of Pharmacists5, ii) enquiring to the manufacturing laboratories and iii) searching the Internet using Yahoo and Google search engines and entering the search term "comprar planta medicinal" ("to buy medicinal plant"). The Spanish retail sites found were analyzed for the commercialization of former TM.

Since we detected on the Internet illegal health claims, we conducted a second search aimed to make a preliminary evaluation of the magnitude of the problem. We entered "to buy herbal medicine", both in English and Spanish and, from the first 500 consecutive retail sites found, we selected the ones whose products could be bought from Spain. Then, they were evaluated for illegal health indications.

The two searches on the Internet were conducted in 2013, from October to December, and each web site was analyzed independently by two authors (from NTG, CGP, ENA, JBE, AMM and FJLC). In case of conflicting reports on the evaluation of health or therapeutic claims, the final decision was taken by the whole author team.

Fig. 1 shows the evolution of the Spanish market of TM between 2005 and 2013. The number of licensed TM diminished from 424 in 2005 to 315 in 2010, while there was no change in the number of producing companies (39). But these numbers sharply dropped immediately after the Directive fully came into force, so that in 2011 there were only 38 granted TM (i.e. 12% out of 315 TM) and they were produced by just 7 companies. This was mainly due to the fact that the producing companies refused to apply for the required marketing authorisations, since ii) the EMA had only received 123 applications for traditional use registration from Spain by December 2013 and ii) at least 34% formerly licensed TM in 2010 (i.e. 108 out of 315 TM) was instead registered as food or food supplement in 2013 and up to 54% might have disappeared from the market (we were unable to determine their status). 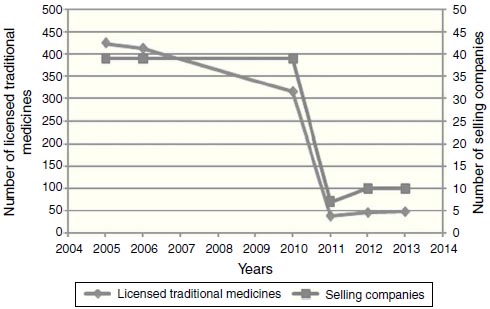 Figure 1. Impact of the Directive 2004/24/EC, which came into force
in 2011, on the Spanish market of traditional medicines.

In 2013, only 48 TM (from 10 producing companies) had been granted a license through the simplified registration procedure (Figure 1), so that Spain accounted for just 6.14% of the 1319 authorized TM in the EU. The market was monopolized by a single company, Arkopharma, that owned 72% of all TM in Spain. The licensed TM were mainly used in the treatment of digestive or metabolic disorders (10 TM), cardiovascular (10 TM) and central nervous system disorders (7 TM).

Finally, search on the Internet identified 63 retail sites making illegal health or disease claims and whose products could be bought from Spain.

Our results clearly indicate that the simplified registration for TM is actually a very exigent procedure so that, only 12% formerly licensed TM in Spain had been granted a license in 2011 under the Directive. As regard the producing companies, they have also suffered the same "mass extinction" than TM upon the "Directive impact" on the Spanish market. Furthermore, at least 34% formerly licensed TM are now marketed as food or food supplements and we have been unable to confirm that more than a half of them are currently commercialized. By contrast, the implementation of the Directive in Germany resulted in the licensing of 45% former TM8.

Our data suggest that the Directive has triggered in Spain the massive shift of herbal medicines into the less strictly regulated food sector. We have not addressed the causes behind the strong effect of the Directive in the Spanish TM market. However, according to a survey, only one third (36.6%) of the Spanish consumers of herbal products used to treat health conditions buy them at pharmacies9. In other European Countries as Germany, this figure is almost inverse10. Therefore, if herbal products traditionally used to treat health conditions are mainly bought in shops for herbal products rather than in pharmacies, why should the producing companies apply for a much more expensive traditional use registration?

The shift of TM into the food sector in Spain may have important consequences as people determined to keep taking their favourite unlicensed herbal medicines may go online and choose to buy them from merchants who may be careless about quality or potency: in a recent review of 13 common herbals of the top 50 Web sites, only 10.5% recommended consultation with a healthcare professional and fewer than 8% of retail sites provided information regarding potential adverse effects, drug interactions, and other safety information11. Even worse: we have found more than 60 websites advertising herbal medicinal products under illegal therapeutic claims. Similar results were published recently in a report on food supplement brands traded over the Internet in Spain12. These facts somehow subvert the purpose of the Directive, which was aimed at ensuring protection for public health through well established standards of quality, safety and patient information.

In summary, the Directive has brought about a dramatic drop in the number of licensed TM in Spain in favour of their marketing in the food sector. The expected benefits of the Directive to the Spanish public health might be compromised, particularly by the Internet marketing of herbal products with illegal health claims.

Editor responsible for the article

There are no conflicts of interest to disclose

The authors wish to thank the Spanish Consejo General de Colegios Oficiales de Farmacéuticos for its contribution to this article. 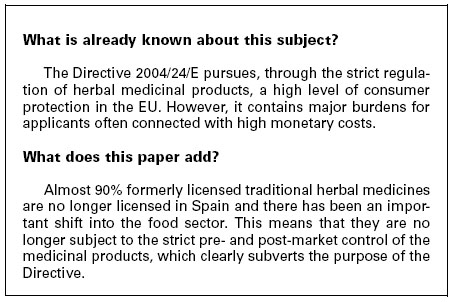 8. Ministry of Foreign Affairs of the Netherlands: Saps and extracts for pharmaceuticals: trends and segments; (consulted on 10/4/2013) Available at: http://www.cbi.eu/marketinfo/cbi/docs/saps_and_extracts_for_pharmaceuticals_trends_and_segments.