Prevalence of Chagas disease in the Bolivian population of Majorca (Spain)

This study was partially financed by Médicos del Mundo.

Objective: To establish the prevalence of Trypanosoma cruzi infection in Bolivian (Spain) participants.
Methods: A cross sectional study was carried out in Majorca. Bolivian residents older than 18 years assigned to the family physicians of two primary care centers were randomly selected from the health card population database. Participants were invited to attend a serology test and an interview. T. cruzi infection was confirmed after two positive ELISA tests. If the result was positive or dubious, the serological test was sent to the National Microbiology Center for confirmation.
Results: A total of 251 participants were included (response rate 36.3%). The overall seroprevalence of Chagas infection was 19.1% (95% CI: 14.06-24.19). Seroprevalence was higher in participants from highly endemic provinces, those from rural areas, those who had lived in mud houses, and in those whose mother or a family member had contracted this infection.
Conclusion: This study demonstrates a high prevalence of T. cruzi in Bolivian residents, which was strongly associated with established risk factors.

Chagas disease is one of the seventeen called neglected tropical diseases, as well as the parasitosis with the highest morbidity and socioeconomic impact in the American continent.1 It is caused by a flagellate protozoan, Trypanosoma cruzi, transmitted by the bite of an haematophagus insect.2 Approximately 70% of infected patients will continue asymptomatic and the rest will develop symptoms.

Since the 80s, and due to the important migratory movements from endemic areas, it was predicted that in a near future Chagas disease would become a public health issue in non-endemic countries. The lack of identification and treatment increases the risk of health complications and transmission.3

Spain is estimated to be, after USA, the country with the highest number of immigrants from Latin America,3 as well as one of the non-endemic countries with the highest prevalence of Chagas disease.4 In 2012 there were 1,633,755 Latin American immigrants in our country, from those, a 12.18% came from Bolivia,5 where an 80% of the country is endemic. The Balearic Islands present the same figures, with 59,126 Latin American immigrants, of which 10.81% were born in Bolivia5. Most of these people will be attended in primary care at sometime therefore, it is necessary to provide estimates of the presence of Chagas infection in primary care Bolivian population. This study aims to estimate the prevalence of Chagas disease in Bolivian subjects living in Majorca (Spain).

We carried out a descriptive study (October 2011-March 2012) in Palma health centers of Escuela Graduada (22,060 inhabitants) and Son Pisà (23,000 inhabitants) with a percentage of non UE immigrant population of around 12%. At the beginning of the study, 8,731 Bolivians were registered with a general practitioner (GP) in Majorca, of those 7,646 lived in Palma city and 1,609 (18.43%) were registered in the study health centers.

Subjects included were those born in Bolivia, 18 years and older. Subjects were excluded if they had a great disability, had no telephone or rejected to participate. We estimated a sample size of 264 subjects for a 7% prevalence,6 a precision of 3% and 95% confidence level. Considering possible low response rate, we decided to contact 691 subjects.

Subjects were selected through computer systematic random sampling from the list of Bolivians registered in the Health Card population data base of the two health centers (where most of the authors were working). Individuals were invited to participate by telephone and given an appointment. After signing an informed consent, an interview and a blood extraction were carried out.

The serological sample was sent to the microbiology laboratory at Son Espases Hospital. A first immunochromatographic serological diagnostic method was performed (SD Chagas Ab Rapid Bioline Standard Diagnostics, Inc) with 90.4% sensitivity and 94% specificity.7 A negative test was considered negative for Chagas disease. If the result was positive or doubtful, the sample was sent to the National Microbiology Center laboratory for its confirmation through a second different ELISA ("IFI in house") with 98.5% sensitivity and 100% specificity.8

Data were collected on age and sex; T. cruzi risk factors, knowledge about the disease and results of the serology.

The chi-squared test was used to assess the relationship between the prevalence of T. cruzi infection and categorical variables and Student's t test for age. A backward conditional logistic regression analysis was performed to evaluate the independent effect of risk factors over the prevalence. All significant variables in the bivariate analysis were included. Reception of any Chagas treatment was excluded because colinearity with previous Chagas results was detected. The study received the approval of the Majorca Primary Care Research Committee.

We included 251 subjects of the initial sample (691). Reasons for not participation were: 281 did not answer to 3 phone calls, 32 rejected participation, 24 changed address, 57 wrong telephone number, 19 previous serology and 27 <18 years old.

Epidemiological data are presented in Table 1. Forty eight were positive, which means a prevalence of 19.1% (CI95%: 14.06-24.19), no false positive cases were detected. A total of 75% of men and 70% of women were between 18- 39 years old. Most of the studied risk factors were significantly related with the presence of Chagas disease. Subjects coming from Cochabamba, Santa Cruz and Chupisaca regions presented significantly higher prevalence that those from other regions, as well as subjects reporting having lived in rural areas, mud houses or those referring a history of infection for their mother or relatives. No significant differences were found for age, sex, years out of Bolivia or transfusion experience. Five subjects declared not having seen the insect but all had more than one risk factor. In the adjusted model, predictive factors for infection were: women 2.09 (95%CI: 0.9-4.59), reported familiar infection 2.65 (95%CI: 1.19-5.76) and having seen the insect 4.79 (95%CI: 1.37-16.70). 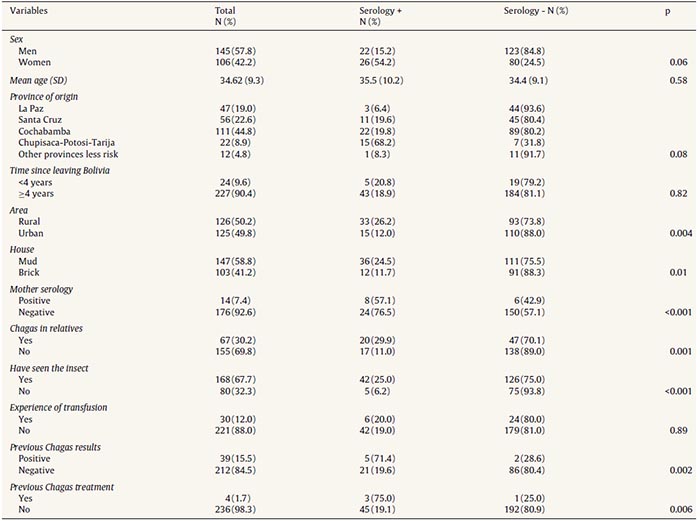 As shown in Table 2, there is an important level of information about the disease. There were no statistically significant differences on the knowledge level according to serological results. 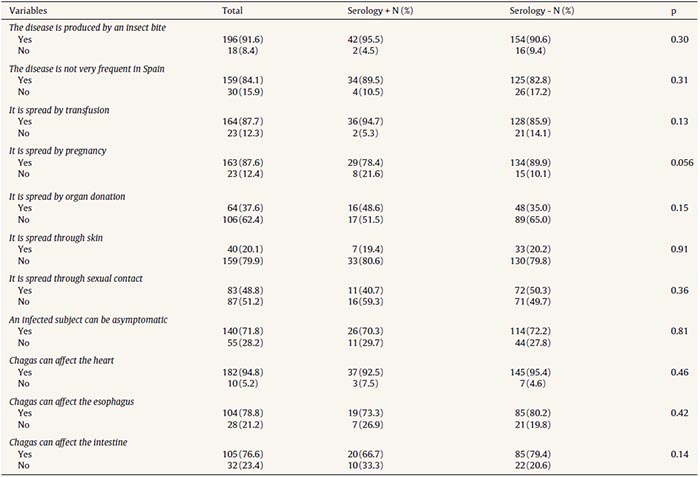 Our study shows that 19.1% of the Bolivian immigrants living in Majorca are infected with T. cruzi, and that a high percentage present risk factors associated with Chagas disease. This study uses a community-based approach in order to provide a fair estimate of Chagas prevalence. The practical difficulties associated with random sampling from a community sample frame resulted in a less optimal estimate of the disease presence in this population.

This high prevalence matches the results found in other Spanish studies9,10. For instance, Roca et al. found a prevalence of 16.53% among Bolivians compared with a 2.87% in the total Latin American studied population.9 In Switzerland prevalence among Bolivian population was of 26.6%, whereas the global one was of 12%.11

Some authors point out that the heterogeneity in prevalence estimation varies according to the studied immigrant origin and the recruiting scenario. Thus, patients recruited in primary care would present lower prevalence than that found in reference centers12,13.

Our results are also similar to those of other studies, when referring to the relationship of risk factors and positive serology. Risk factors not associated with positive serology prevalence in the study, were time out of Bolivia and origin region, probably because most subjects came from high incidence regions. Our sample was very similar to the one of Jackson et al,11 regarding age but in contrast, we did not find differences by age. We did find higher prevalence in women compared with other studies9,11.

The persons interviewed have a high knowledge level about Chagas disease. Few studies have explored this subject among Latin American population.9 These results could be due to the Bolivian Programs that aim sensitizing and informing the population.

Despite the high estimated prevalence of Chagas disease observed, it is difficult to conclude that Bolivian subjects living in our country, could globally profit from population screening of the disease, as no benefits of this procedure have been reported to date. A detailed assessment of the cost-benefit of implementing a population screening should be carried out, even when there is not yet an absolute indication about the need of treating all patients in the chronic indeterminate phase.14 In Spain, T. cruzi screening is highly established in blood or high risk organ donors. However, protocol performance in pregnant and childbearing age women, and newborns is more optional. Thus, a national consensus to apply protocols in these women is necessary.15

The strongest point in our study refers to the random subject selection from the Health Card population data base of two health centers. This could lead to a prevalence estimate of Chagas disease in a non selected Bolivian population as compared with health care attendees or refugees. However, there could be a biased estimation of prevalence if Bolivian population registered in other health centers or non participation are related with T. cruzi risk factors, such as origin region.

In conclusion, a high prevalence of Chagas disease in the Bolivian population has been observed, especially in those that presented the common risk factors. Due to the high T. cruzi infection frequency in population from Bolivian origin compared with those coming from other Latin American countries, the screening in this group should be considered to avoid the transmission and progression of the disease.

The authors would like to thank Médicos del Mundo for their support in contacting patients and financing serology tests. Also to the health centers admission personnel and nurses for their collaboration in managing appointments and blood tests. Our sincere gratitude to María D. Flores (Instituto Carlos III) and to the microbiologists of the Hospital Son Espases for their technical assistance and collaboration and to Stephen Kelly for his writing assistance. 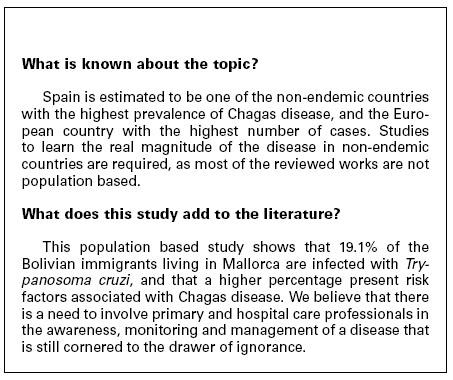