The Ministry of Health of Chile contributed to the accomplishment of this work.

Objective: To determine the prevalence of caries and identify the associated factors among children aged 2 and 4 years in southern Chile.
Methods: A cross-sectional study was conducted in a random sample of 2,987 children. Dental examinations were performed in all participating children and a self-administered survey was administered to their primary caregivers. The statistical analysis included a zero inflated negative binomial regression model.
Results: The prevalence of caries was 20.3% for 2-year-olds and 52.7% for 4-year-olds. The factors associated with caries included the following: living in the Bio-Bío region, PR2year-old: 1.65 (1.10-2.47), PR4year-old: 1.44 (1.18-1.75) and having a low socioeconomic position, PR2year-old: 5.39 (2.14-13.57), PR4year-old: 3.71 (2.68-5.13) or a medium socioeconomic position, PR2year-old: 2.79 (1.06-7.33), PR4year-old: 2.70 (1.92-3.79). In 4-year-olds, a high frequency of consuming sugary drinks at bedtime (PR: 1.30; 1.06-1.59), not brushing teeth daily (PR: 1.37; 1.18-1.60), and the presence of gingivitis (PR: 1.64; 1.28-2.09) were also associated with caries.
Conclusions: The high prevalence of caries in this young group is concerning. The factors associated with caries identified in this study could help in the design of preventive interventions at early ages.

Early childhood caries is a significant public health problem due to its high prevalence in economically disadvantaged groups.1 Factors such as consumption of sugary foods, dental plaque accumulation, and number of people in the household have been found to be associated with caries.2,3

Few studies have evaluated oral health and socioeconomic disparities in preschool children in Latin American countries.4,5 In Chile, efforts have been made to diminish health disparities (e.g., water fluoridation programs). Nevertheless, the caries distribution associated with socioeconomic, dietary and oral hygiene factors has not been described for preschool children.

We aimed to identify factors associated with caries extent and estimate the prevalence of caries among preschool children in southern Chile.

The following was an observational, cross-sectional study. The sampling frame was the daycare centers register (N = 2,473). A stratified multistage probability sampling method was used. Stratification was based on age (2 and 4-year-old) and geographical region (Bio-Bío, Araucanía, Los Lagos-Los Ríos, and Aysén-Magallanes). The sampling unit was daycare centers in each stratum. We included children attending all three types of daycare centers (public without out-of-pocket charges, subsidized, and private).

This study was approved by the Bioethics Committee of Universidad Mayor, Chile.

Clinical variables included the traditional dental caries index (dmft),6 caries prevalence (dmft ≥1), and gingivitis (only measured in 4-years-olds). A socioeconomic position index was created using educational level of the head of the household and household income variables. Sociodemographic variables included gender, age, educational level, and region of residence; family composition was assessed with the number of children and adults living in the household.2,7 Nutritional factors were evaluated with bedtime sugary beverages frequency, tea consumption (because of its fluoride composition), and persistence of night-time breastfeeding. Oral hygiene habits included tooth brushing frequency and adult supervision. A self-administered questionnaire for caregivers evaluated these variables.

Data was collected between October 2009 and May 2010. Caregivers of children aged 2 and 4 were sent a letter describing the study and asking for consent to examine their child. The letter also included a survey for the caregivers to fill out at home. Children of parents who consented underwent a standardized dental examination6 performed by two trained dentists. Calibration was conducted in 20 children. The caries index kappa coefficient for inter-rater agreement was K = 0.89 and K1 = 0.98, K2 = 0.91 for intra-rater agreement. The gingivitis kappa coefficient was K = 0.773 for inter-rater agreement and K1 = 1.00, K2 = 1.00 for intra-rater agreement.

According to the sample design and to obtain representative results by region, sampling weights were calculated as the inverse probability of being included in the study. Frequency tables, point estimates and 95% confidence intervals were used. The prevalence of dental caries, dmft index, and Significant Caries Index (SiC, which identifies the third most affected by caries in the population) were calculated for each stratum.8

We used a zero inflated regression model to analyze the association of sociodemographic factors, family composition, nutritional and oral habits with the dmft index for 2 and 4-year-old children. The association of gingivitis with the dmft index was evaluated only in 4-year-olds. We used the Vuong test to select between the Poisson (ZIP) and negative binomial (ZINB) distributions. Data analysis was performed using Stata 13.

The final sample size was 1,387 two-year-old children and 1,600 four-year-old children. The response rate was 75.4% and 76.2% respectively. A total of 65.7% of the 2-year-olds and 59.1% of the 4-year-olds were from families with low socioeconomic position. The socioeconomic position distribution was similar between regions (data not showed). The highest educational level reported by 65.4% of the 2-year-olds' caretakers and 63.8% of those of 4-year-olds was secondary school or less.

Caries prevalence in 2-years-olds was 20.3% and 52.7% in 4-year-olds. In both groups, the prevalence of caries was lower as the household's socioeconomic position category was higher (Table 1). 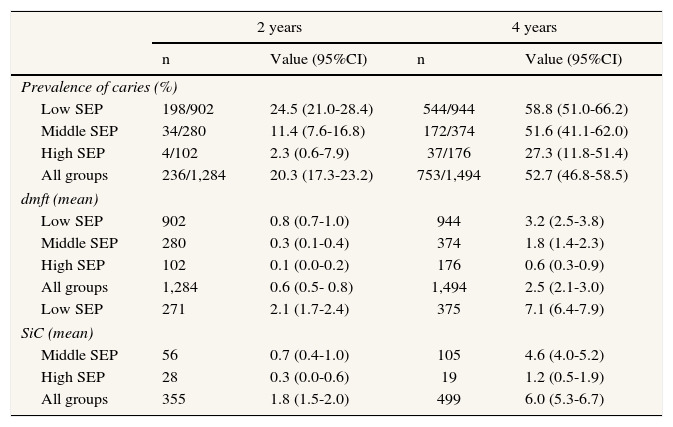 The mean dmft was 0.6 in 2-year-olds (95% confidence interval [95%CI]: 0.5-0.8). In this group, the mean number of decayed teeth was 0.6 (95%CI: 0.5-0.7) and mean number of filled teeth was 0.0 (95%CI: 0.0-0.1). No extractions were found. The mean dmft was higher in children from low socioeconomic position households than in those from high socioeconomic position households (Table 1). No statistically significant differences between boys and girls were found for the dmft index (p-value for U Mann-Whitney test was 0.097).

Table 2 shows the results obtained from the multivariable model for dmft. For 2-year-old children living in the Bio-Bío region, the dmft was 1.65 times larger than it was for those living in the region of Aysén-Magallanes, whereas for 4-years-old it was 1.44 times as large. Children in low and middle socioeconomic position households had a significantly larger dmft index than those in higher socioeconomic position households. 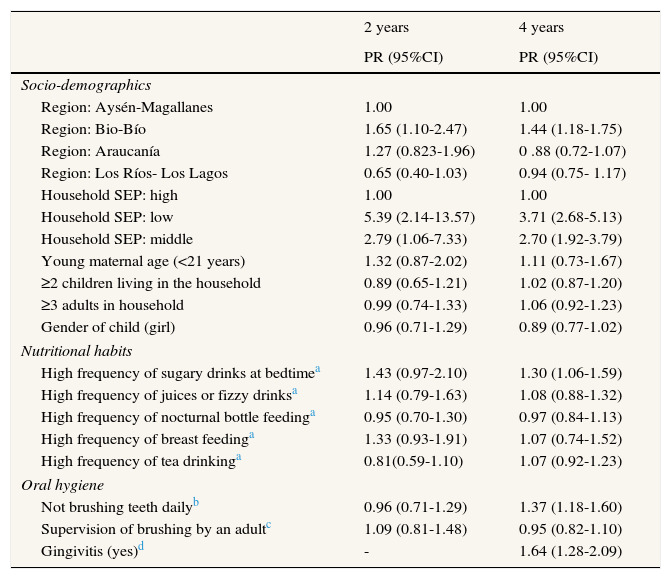 Four-year-old children who drank sugary beverages before bedtime with high frequency had a dmft 1.30 times as large as those who drank before bedtime less than 3 times per week. Four-year-olds who did not brush their teeth daily had a dmft 1.37 times larger than those who brushed their teeth daily. In this age group gingivitis was associated with the dmft index (PR = 1.64).

Our findings reveal a high prevalence of dental caries in the preschool children in Chile. Countries such as the United States9 and Brazil4 have reported lower caries prevalences among comparable populations. Despite these differences, caries showed a similar distribution pattern among socioeconomic levels as described in other studies.4,9 It is important to note that the dental caries index used for this study followed the guidelines of the WHO,6 which does not differentiate between stages of development of dental cavities. This situation might underestimate the caries prevalence in this population.

The mean dmft in 4-year-olds was lower than that reported in similar studies in Chile,10 but higher than that reported in similar populations in other Latin American countries11 and indicates considerable oral damage due to caries. Health disparities can be further understood with the SiC index which showed that children in low socioeconomic position households had extensive caries experience.

The multivariable and descriptive analyses confirmed large-scale inequalities in socioeconomic position in both age groups, which is consistent with the literature describing older children.1,12 These inequalities are reflected in the descriptive results, which showed that 2 year old children of low socioeconomic groups had 10 times more caries than those of higher socioeconomic groups. Also the multivariable model showed a prevalence ratio of caries in children of low socioeconomic groups of at least twice that of higher socioeconomic groups. On the other hand, nutritional factors contributed independently to caries prevalence. We hypothesize that these behaviors replaced previous behaviors also associated with nighttime feeding at earlier ages. Oral hygiene habits were found to be protective factors at age 4 which might be due in part to increased motor control,13 and their increased ability to understand instructions.14 Other factors such as parents educational level and dental education in daycare centers might also affect oral hygiene among individuals, but they could not explain the difference between ages. The higher risk of developing caries in the region of Bio-Bío could be explained by the extremely low levels of fluoridated water in this area (0.003 to 0.055 ppm).15

Our results showed that there were no statistically significant differences between boys and girls in the number of carious lesions. The literature regarding this topic for this age group is scarce and not conclusive.16

The study limitations are that all sampled children attended daycare facilities, affecting the results' external validity; also the cross-sectional study design emphasizes the need to be cautious with the interpretation of its results. It is important to consider that nutritional and oral hygiene variables might be influenced by oral health status and therefore we cannot establish these as risk factors for dental caries.

On the other hand, the strength of this study relies on the sample size and on the heterogeneity of the sample in terms of geographical distribution, family characteristics, and type of daycare centers (public without out-of-pocket charges, subsidized, and private).

In conclusion, this study found a high caries prevalence in children at very young ages in this region of Latin America. Socioeconomic position was found to be associated with caries experience. Nutritional habits were associated with caries development in all children, independent of their socioeconomic status and region of residency. We suggest that other factors such as family traditions might be related to dietary habits in this population. We encourage the implementation of oral health education and prevention programs aimed at improving nutritional habits at a familial level so that children can experience a healthy home environment.

L. Hoffmeister and P. Moya were involved in the conception and design of the work. C. Vidal carried out the analysis and interpretation of data. D. Benadof contributed to the writing and its critical review with important intellectual contributions. All authors have approved the final version and are jointly accountable for all aspects of the work. 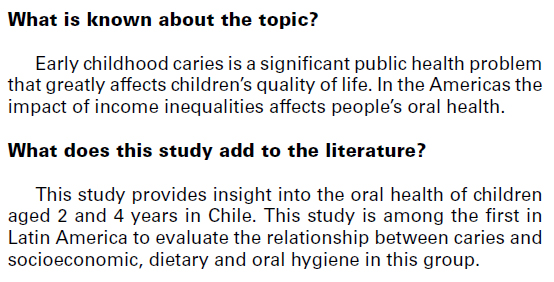 8. Bratthall D. Introducing the Significant Caries Index together with a proposal for a new global oral health goal for 12-year-olds. Int Dent J. 2000;50:378-84.