The double burden of malnutrition: a threat for Peruvian childhood

This “breakthrough” of Peru in terms of infant mortality and reducing malnutrition and its comorbidities is “counteracted” by the maintenance of the prevalence in childhood overweight and obesity. A study using as source of information the reports of the Peruvian Demographic and Family Health National Survey between 1996 and 2011, concluded that overweight in Peruvian children decreased both in urban and rural settings until 2005 before stabilizing in 2011.33. de Mola CL, Quispe R, Valle GA, et al. Nutritional transition in children under five years and women of reproductive age: a 15-years trend analysis in Peru. PloS One. 2014;9:e92550. In recent years, there have been no epidemiological studies regarding the national prevalence of overweight, obesity, and chronic child malnutrition; therefore, we conducted an analysis of the Information System of Nutritional Status (SIEN) data between 2010 and 2015 of children under 5 years that attended healthcare facilities at a national level.55. Instituto Nacional de Salud. Vigilancia alimentaria y nutricional. Sistema de información del estado nutricional. (Accessed 08/09/2016.) Available at: http://www.portal.ins.gob.pe/es/cenan/cenan-c2/vigilancia-alimentaria-y-nutricional/sistema-de-informacion-del-estado-nutricional.
http://www.portal.ins.gob.pe/es/cenan/ce...

Therefore, to mitigate this risk, we need multidisciplinary participation, awareness, and involvement in the design of strategies for longitudinal policies. We also need to involve decision makers, stakeholders and academics to fight against this double burden of malnutrition, which steals the opportunities for a better future to the children from Peru.

Figure 1   Prevalence of overweight, obesity and chronic malnutrition in children under 5 years, Peru 2010-2015. 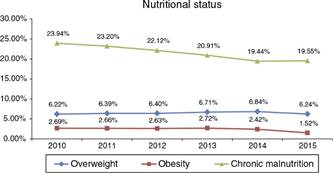