The value of comparative research in major day surgery

To measure time trends in major day surgery rates according to hospital ownership and other hospital characteristics among the providers of the public healthcare network of Catalonia, Spain.

The greatest growth in the rate of major day surgery was observed among private for-profit hospitals: 42.9 (SD: 22.5) in 2009 versus 2.7 (SD: 6.7) in 1996. These hospitals exhibited a significant increase in major day surgery compared to public hospitals (coefficient 2; p-value <0.01)

The comparative evaluation of hospital performance is a decisive tool to ensure that public resources are used as rationally and efficiently as possible.

The number of studies assessing efficiency, competiveness and quality of care in both the public and private health sectors has risen considerably over the last three decades. Evidence shows that many countries have increased private involvement in the governance, financing, management and provision of the public health system during this time.11. Anderson S. Public, private, neither, both? Publicness theory and the analysis of healthcare organisations. Soc Sci Med. 2012;74:313-22. It has been particularly visible in countries with established National Health Systems (NHS).22. Krachler N, Greer I. When does marketisation lead to privatisation? Proﬁtmaking in English health services after the 2012 Health and Social Care Act. Soc Sci Med . 2015;124:215-23. In Spain, since the early 1980s, the decentralization of the NHS to autonomous regions has produced an uneven entrance of private providers into the public health system. In Catalonia (Spain), the health system has been characterized by a division of public financing and provision functions, and healthcare provision is currently the responsibility of a wide range of public and private contracted providers.

Overall, these processes illustrate that the fine line between public and private seems often blurred, since the access to profitability has created communicating vessels from public to private spaces. In this regard, outpatient surgery performed in private centres represented a growing share of all surgical operations performed for the public health systems of many countries. Outpatient surgery has very specific characteristics, for example, it is estimated that hospital costs are 25-68% lower than for surgery performed on an inpatient basis,33. Castoro C, Bertinato L, Baccaglini U, et al. Day surgery: making it happen. World Health Organization: European Observatory on Health Systems and Policies. Policy Brief. 2007. it has high technology needs and the health outcomes are positive (e.g., complications are usually minor).

In Catalonia, recently, a descriptive study has been published analysing the outpatient surgery, however they have not considered the tendency analysis to compare the performance along the time, also they do not distinguish between the providers of the public healthcare network (other public hospitals, private-not-for-profit hospitals and private-for-profit hospitals).77. Vergara F, Freitas Ramírez A, Gispert R, et al. Evolución de la cirugía mayor ambulatoria en Cataluña, 2001-2011. Gac Sanit. 2015;29:451-3. This study aims at measuring longitudinal data from 1996 to 2009 on major day surgery rates among the providers of the public healthcare network of Catalonia. The longitudinal analysis will provide a more robust model to observe hospital patterns of change.

The Ministry of Health in Spain has the mandatory and publicly accessible database called Statistics of Health Establishments providing Inpatient Care (ESCRI in its Spanish initials). It has generated information maintaining consistency and methodological homogeneity over time, and although it only ensures comparability within autonomous regions, it is possible to obtain a completely homogeneous series of the public healthcare network of Catalonia covering the period 1996-2009.

This was a longitudinal retrospective study of hospitals in the Catalan Public Hospital Network from 1996 to 2009. Data for this study came from the ESCRI. The sample was made up of all acute care hospitals belonging to the Catalan Public Hospital Network with 75% or more publicly funded discharges, registered in the ESCRI between 1996 and 2009. One hospital, with data for only one year, was excluded from the analysis. The sample sizehad two dimensions: the number of experimental units (hospitals) and the number of observations per experimental unit (years).

The indicator analysed was the global major day surgery rate per 100 operations. Construction of the indicator and variables of hospital characteristics (number of beds, number of high technology devices, total number of physicians and total number of medical interns) were based on the recommendations of the Ministry of Health.88. Ministry of Health. Health Information system of the National Health System. Key indicators. (Accessed 22/10/2016.) 2010. Available at: Available at: http://www.mscbs.gob.es/en/estadEstudios/estadisticas/sisInfSanSNS/pdf/SISNS_en.pdf
http://www.mscbs.gob.es/en/estadEstudios... 99. Ministry of Health. Classiﬁcation of public hospitals by using cluster analysis. Department of Quantitative Methods in Economics and Management. Universidad de Las Palmas de Gran Canaria. 2007. (Accessed 22/10/2016.) Available at: http://icmbd.es/docs/resumenClusterHospitales.pdf
http://icmbd.es/docs/resumenClusterHospi...

Hospital ownership was classified according to Saltman1010. Saltman RB. Melting public-private boundaries in European health systems. Eur J Public Health. 2003;13:24-9. and the information available in the ESCRI as: 1) public: the Catalan Health Institute; ii) other public: provincial and municipally-owned public hospitals; iii) not-for-profit: private-not-for-profit hospitals; and iv) for-profit: private-for-profit hospitals. The hospitals are unequally distributed around the territory, public hospitals are concentrated in the provincial capitals and the majority are high-complexity hospitals. The other hospitals are scattered about the region and the majority are basic general hospitals or referral hospitals.1111. Servei Català de la Salut. Payment systems of the public healthcare system in Catalonia, 1981-2009. Barcelona: Generalitat de Catalunya, Departament de Salut; 2009.

A generalized linear mixed model (GLMM)1212. Rabe-Hesketh S, Skrondal A. Multilevel and longitudinal modeling using Stata. 3rd ed Stata Press; 2012. p. 974. with Gaussian response and random interceptand random slopes was fitted to test our hypothesis that the hospitals had different levels of and time trends in major day surgery rates, according to their ownership and other hospital characteristics. The model took of account the repeated observations from each hospital over the whole time period and was adjusted for the number of beds, and numbers of high technology devices, of physicians, and of interns. The slope of the weighted line is interpreted as a composite estimator for the annual variation of the outcome variable.

The threshold to include or exclude the variables in the model was 5% significance for the ANOVA test, except when the Akaike information criterion worsened.1212. Rabe-Hesketh S, Skrondal A. Multilevel and longitudinal modeling using Stata. 3rd ed Stata Press; 2012. p. 974. Finally, the model was validated employing residual analysis. The analyses were performed using the free software, R v.3.0.3.

Thumbnail
Table 1
Hospital characteristics of the study sample in 1996 and in 2009.

The results of the GLMM analysis of the composite score indicate that the hospitals in the ownership categories of public, other public and private not-for-profit had the highest rates of major day surgery at the beginning of the period. The major day surgery rate for private for-profit hospitals was significantly lower than that of public hospitals in 1996. No differences were found between other pair-wise comparisons of hospital ownership types. In the interaction between hospital ownership and year it may be seen how private for-profit hospitals present a significantly greater annual increase in major day surgery rates (coefficient 2; p-value <0.01), compared to the rest of ownership categories studied. The composite score for public hospitals was +1.96 operations/year and in the case of private for-profit hospitals, it was +3.92 operations/year, which is a significant difference of 2 units. These differences were maintained when performing the multiple comparisons.

Figure 1 highlights the significant predictor hospital ownership and its interaction with time, from the adjusted GLMM. Data points represent the major day surgery rate calculated from fixed effects, while adjusting for other predictors in the model (Fig. 1A). Error bars in the lower part of the figure represent 95% confidence intervals for the differences in major day surgery rates between pairs of hospital ownership categories at the beginning (1996), and end of the study period in 2009, as well as the differences in trends over the study period (Fig. 1B1, B2 and B3). The slope of the hospitals for-profit exceeds significantly in 2 units to that of the public hospitals (Fig. 1B2).

The present study has sought to compare longitudinal data from 1996 to 2009 on major day surgery rates among the providers of the public healthcare network of the Catalonia. The results confirm our hypothesis that the hospitals had both different annual distributions, and different time trends, of major day surgery rates depending on hospital ownership and other characteristics.

In the period studied, the major day surgery contracted by the public purchaser to private for-profit providers increased significantly more than that of other providers of the public network. There is evidence that private centres are more likely to cherry-pick less severe patients than other providers when performing high-profit outpatient surgery.1313. Plotzke MR, Courtemanche C. Does procedure proﬁtability impact whether an outpatient surgery is performed at an ambulatory surgery center or hospital. Health Econ. 2011;20:817-30. This occurs even when the privately-owned hospitals are providing care for the national public healthcare network.1414. Barbetta GP, Turati G, Zago AM. Behavioral differences between public and private not-for-proﬁt hospitals in the Italian national health service. Health Econ . 2007;16:75-96.

Increasingly, policymakers have begun to introduce market-based reforms designed to expose public hospital systems to competition and financial incentives.1515. Saltman RB, Durán A, Dubois HFW. Governing public hospitals. Reform strategies and the movement towards institutional autonomy. World Health Organization: European Observatory on Health Systems and Policies; 2014. However, the results of this study run contrary to the statement that the private sector presence in the public health system tends to improve market competition, given that the activity is limited based on the limited population served, and the private providers have higher investment capacity and tend to specialize in profitable activities.

Determinants of outpatient surgery procedures include geographic dispersion of the population with high isochronous access to a hospital, the development of elements of coordination between hospital and primary care or availability of home care in the health area.1616. Ministry of Health. Major Day Surgery Unit. Standards and recommendations. (Accessed 22/10/2016.) 2016. Available at: http://www.mscbs.gob.es/organizacion/sns/planCalidadSNS/docs/guiaCMA.pdf
http://www.mscbs.gob.es/organizacion/sns... However, they seem to have a limited influence since outpatient surgery procedures are planned and the availability of centres providing outpatient surgery depends on contracts between the public purchaser and different providers. Moreover, despite the statistical modelbeing adjusted for possible confounders it has not been weighted by case-mix because there is a lack of available and publicly accessible data, such as the morbidity of patients separated by type of provider.

In conclusion, the higher annual growth in the major day surgery performed by private for-profit hospitals compared to other providers of the public network shows a political will to increase the activity of those providers. The comparative evaluation of hospital performance is a decisive tool to ensure that public resources are used as rationally and efficiently as possible in order to make the public health system sustainable. Public policies should make more efforts to achieve greater transparency and effective accountability, particularly in public health systems with a wide variety of public and private providers.

The study demonstrates the value of comparative researchusing longitudinal data of the Catalan Public Hospital Networkbetween 1996 and 2009. Its use will provide valuable and suit-able information for the decision-making processes and it cancontribute to achieving better accountability.

The authors would like to thank the advices of Ms. Kayla Smith for her valuable comments and suggestions. 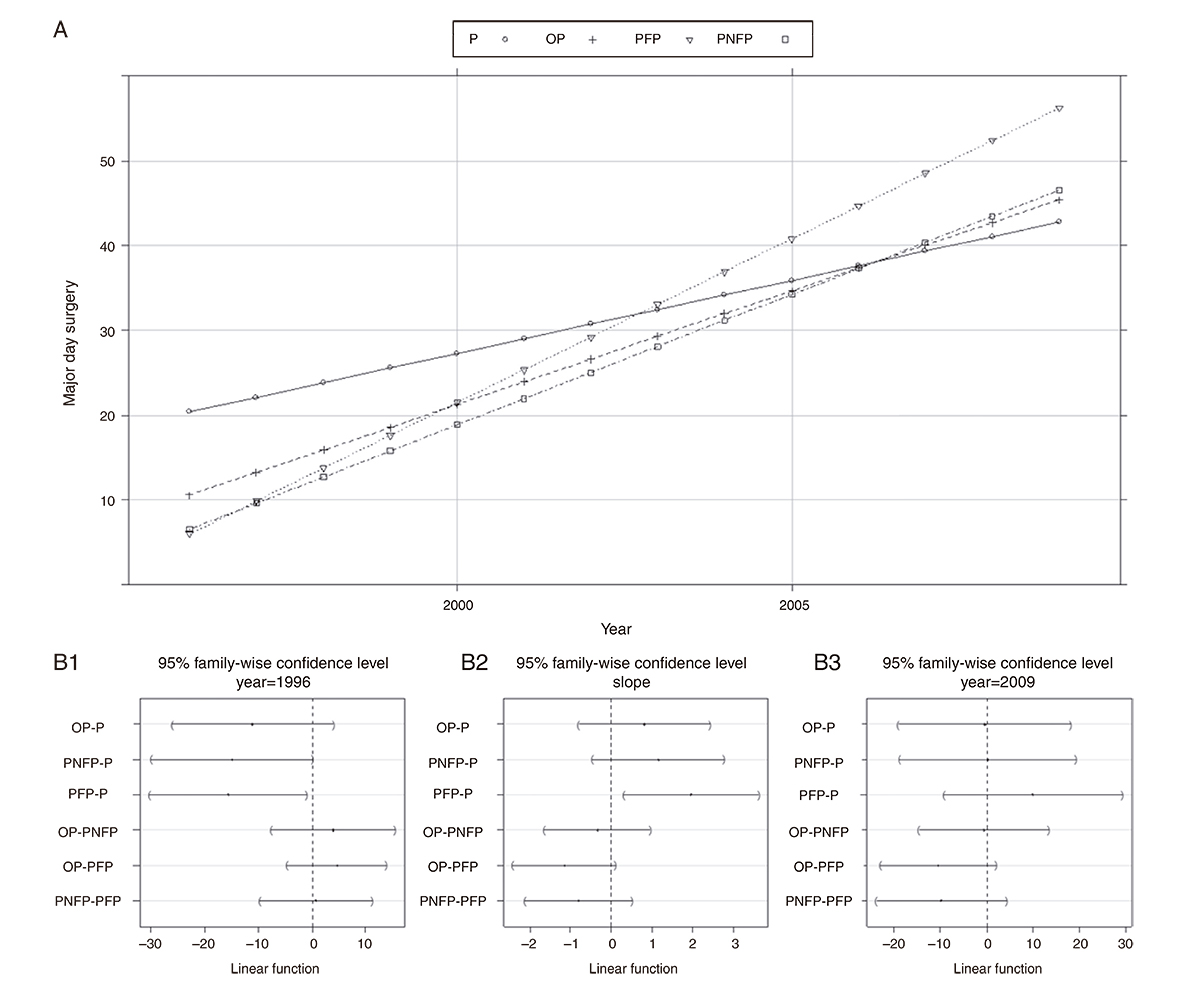