Department of Sociology, Faculty of Economics and Business, University of Barcelona, Barcelona, Spain

To assess the monetary savings resulting from a pharmacist intervention on the appropriateness of prescribed drugs in community-dwelling polymedicated (≥8 drugs) elderly people (≥70 years).

An evaluation of pharmaceutical expenditure reduction was performed within a randomised, multicentre clinical trial. The study intervention consisted of a pharmacist evaluation of all drugs prescribed to each patient using the “Good Palliative-Geriatric Practice” algorithm and the “Screening Tool of Older Persons Prescriptions/Screening Tool to Alert doctors to Right Treatment” criteria (STOPP/START). The control group followed the routine standard of care. A time horizon of one year was considered and cost elements included human resources and drug expenditure.

The study intervention is a cost-effective alternative to standard care that could generate a positive return of investment.

A randomized, open-label, multicenter, parallel-arm clinical trial was conducted in seven primary care centers in the city of Mataró and Argentona (Barcelona, Spain) (122,905 and 11,718 inhabitants respectively, with 13,290 and 1,194 aged 70 years and over, respectively) to assess the effect of a pharmacist intervention on the appropriateness of prescribed drugs. Details of this study were published elsewhere.1717. Campins L, Serra-Prat M, Gózalo I, et al. Randomized controlled trial of an intervention to improve drug appropriateness in community-dwelling polymedicated elderly people. Fam Pract. 2017;34:36-42. In brief, the study population included a randomly selected sample of community-dwelling (non-institutionalized) elderly people aged 70 years and older, receiving eight or more drugs. Recruitment took place from February and May 2012 and participants were pre-selected from the primary care database and randomized with allocated concealment to one of the two study arms. The intervention, which took place no more than a month after the recruitment visit, included a trained and experienced clinical pharmacist evaluating all drugs prescribed to each patient using the GP-GP algorithm and basing their decision about appropriateness on the STOPP/START criteria. The pharmacist discussed recommendations for each drug with the patient's physician on a face-to-face visit in order to come up with a final set of recommendations (stop, start or change medication or dosage). Finally, these recommendations were discussed with the patient, and a final decision was agreed by physicians and their patients in a face-to-face routine visit. A safety control visit was planned one month later. All changes in prescribed medication were registered in the electronic clinical notes and in the study's record form. The control group received usual clinical practice. Overall, 503 patients were recruited; 251 in the control group and 252 in the intervention group, in which 2709 drugs were evaluated. The study protocol was approved by the local ethical committee (CEIC 05/12) and all participants gave their consent by writing before inclusion.

We aimed to assess the reduction in pharmaceutical expenditure alongside the clinical trial due to the pharmacist intervention in primary care in relation to the routine clinical practice (standard of care by the general practitioner), following the ISPOR Good Research Practices report for reporting economic evaluation alongside clinical trials.1818. Ramsey SD, Willke RJ, Glick H, et al. Cost-effectiveness analysis alongside clinical trials II-An ISPOR Good Research Practices Task Force report. Value Health. 2015;18:161-72. We have considered a time horizon of one year following intervention.

Cost elements considered in the study included particularly the use human resources and consumption of drugs. In relation to human resources, it was estimated that the study intervention required a mean of 30minutes of a pharmacist per patient (drug evaluation and discussion with physician) and 20minutes of a physician per patient (discussion with pharmacist and an additional visit with the patient). Monetary valuation of time was possible using salary data available through the 2012 collective labor agreement (Catalan Health Service). The cost per hour, for both physicians and pharmacists, was 32.44 €/hour which included social security contributions but not structural costs. Drug prices, number of dispensed prescriptions, number of “generic drugs” and number of “new drugs” were obtained from the administrative pharmacy database of the Catalan Health Service. “New drugs” are considered drugs commercialized over the last five years and qualified with category C (most suitable therapeutic alternatives exist) or D (alternative therapeutic comparative information is not conclusive) by the Catalan Health Service. Only dispensed medication costs were considered, so real cost in drug expenditure was contemplated. The return of investment of the study intervention has been calculated dividing the savings in drug expenditure by the cost of the intervention.

To estimate the sample size, the main outcome variable was the pharmaceutical expenditure 1 year before and 1 year after the study intervention (paired data). For an alpha risk of 0.05 and a beta risk of 0.2 (two-tailed tests), it was estimated that 81 subjects were required to detect a difference equal to or greater than 250 € in pharmaceutical expenditure, assuming a standard deviation (SD) of 800 €.

Thumbnail
Table 1
Prescription patterns and associated annual costs/expenditures per patient before and after the pharmacist intervention.

Figures 1 and 2 displays the monthly evolution of median drug expenditure and median number of prescriptions during 12 months pre-intervention and 12 months post-intervention for both groups. Further, the higher percentage of generic drugs prescribed in the intervention group remained largely unchanged throughout the one-year follow-up (Figure 3). Finally, as regard the prescription of new drugs (Figure. 4), it is the standard care group that shows a rather more ascendant pattern, particularly over the last 4 months in the study.

Table 2 presents the additional costs and savings under three scenarios. The average annual saving resulting from the study intervention is 37.57 € per patient a year. According to the sensitivity analysis performed, annual savings per patient range from 45.68 € (optimistic scenario) to 26.75 € per patient (conservative scenario). If we were to estimate the return on investment of the study intervention, dividing cost savings (64.30 €) by annual cost of intervention for each scenario, we would argue that for 1 € invested in the program we would be saving an average of 2.38 € per patient a year (ranging from 1.70 € to 3.40 €).

Our study reveals that a one-time pharmacist intervention in primary care allows for a 12 months accumulated reduction in total drug prescription and expenditure in community-dwelling polymedicated elderly people. It also shows an increase in the number of prescribed generic drug and a reduction in the number of prescribed “new drugs”. Since savings in drug expenditure are greater than costs derived from the intervention, the pharmacist intervention can be a cost-effective alternative to standard of care rendering a positive return on investment (2.38 €) per euro.

Monthly evolution of median cost, median prescriptions per patient and percentage of generic drugs showed a somewhat parallel evolution on control and intervention groups indicating that the initial gap between both groups generated by the pharmacist intervention had a long-lasting effect on both variables. This effect appears to be slightly diluted one year after the intervention, and perhaps indicates that another pharmaceutical intervention should be done as reinforcement. On the other hand, “new drugs” showed an increase in prescription over the last 4 months in the study, pointing to a greater penetration of new products as therapeutic options in this group.

Although a significant reduction in drug prescription and expenditures was observed resulting from the intervention, it is of relevance to report that the control group also experienced a significant reduction in drug expenditure itself during the follow-up study period. This fact can be partially attributed to the study design, which was an open-label randomized clinical trial with possible intervention-to-control contagion. The prescribing physicians who received recommendations from the pharmacist regarding patients in the intervention group also visited patients in the control group. Consequently, the control group have indirectly benefited from the intervention, possibly diluting the true effect of the intervention. Moreover, the decrease in drug prescription in the control group may also be explained by other measures put forward by the Catalan Health Service to control drug expenditure in the primary care setting and by other important state control measures such as the Royal Decree-Law 16/2012, which introduced the co-payment system for outpatient pharmaceutical services and the exclusion of more than 400 products from public funding.

The reduction in total drug expenditure is largely a consequence of a decrease in the number of drugs prescribed (drug discontinuations), which accounts for 9.2% of total initial prescriptions. In addition, dose adjustments accounted for 6.9% and drug substitutions for 3.1% of initial prescriptions1717. Campins L, Serra-Prat M, Gózalo I, et al. Randomized controlled trial of an intervention to improve drug appropriateness in community-dwelling polymedicated elderly people. Fam Pract. 2017;34:36-42.. The use of generic drugs had a limited impact in drug cost savings since the Spanish drug regulation does not allow for differences in publicly financed prices between generic and non-generic drugs. Finally, it should be noted that although the prescription of new drugs is only a small percentage of overall drug prescription, the control group shows a more than three-fold increase in this respect when compared to the intervention group. Given the very high price of these new drugs, small differences in prescription frequency may have a relevant economic impact.

Probably, the main strength of the study is its controlled and randomized experimental design. There are a number of advantages of performing economic studies as part of an on-going clinical trial.2727. Shaya FT, Samant N. Cost studies in clinical trials. Expert Rev Pharmacoecon Outcomes Res. 2004;4:591-4. Among other benefits, it is argued that since economic evaluation largely depends upon the quality of the data generated, clinical trials are an efficient setting for economic analyses. Both the quality of the data and the greater control over potential sources of bias favor clinical trials. However, the literature also outlines some limitations, the most relevant to our study being the generalization of the economic impact of the intervention in real-world practice. To overcome this limitation, we have selected a comparator that represents the most realistic choice in real practice. Other study limitations include: a) the intervention-to-control contagion, which may dilute the effect of the intervention; b) the exclusion of deaths from the analysis, which may carry an underestimation of total drug expenditure but do not alter inter-group comparisons because of the balanced number of deaths between groups; and c) cost elements considered are only cost in drug consumption and direct costs in human resources (time invested was a theoretical estimation), therefore more economic impact studies and full economic evaluations are required.

In summary, the present study shows that the intervention of a clinical pharmacist in the primary care setting evaluating all medication in polymedicated community-dwelling elderly subjects is responsible for a reduction of approximately 7% in drug expenditure. Such a community intervention may be a cost saving alternative with a possible positive return on investment.

Potentially inappropriate prescribing has been found to be frequent in elderly population and associated with morbidity, adverse drug events, hospitalizations, and health care expenditures. Several criteria and algorithms have been developed to reduce it. However, limited evidence exists about economic evaluations of these interventions.

The intervention of a clinical pharmacist in the primary care setting evaluating all medication in polymedicated elderly subjects is responsible for a reduction of approximately 7% in total drug expenditure (a mean reduction of 64 € per patient a year). Such a community intervention is a cost saving alternative with a positive return on investment.

Figure 1   Evolution of median of drug expenditure (€) per patient 12 months before and 12 months after the intervention. 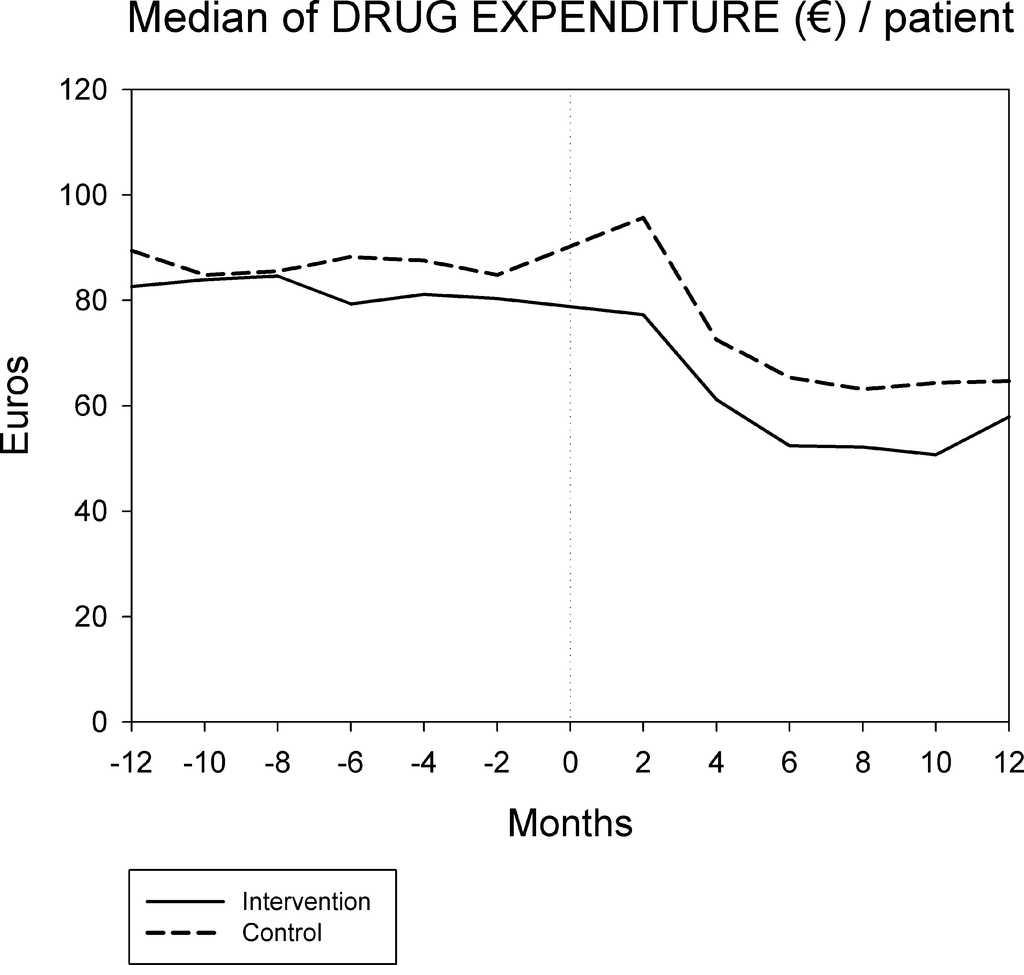 Figure 2   Evolution of median of prescriptions per patient 12 months before and 12 months after the intervention. 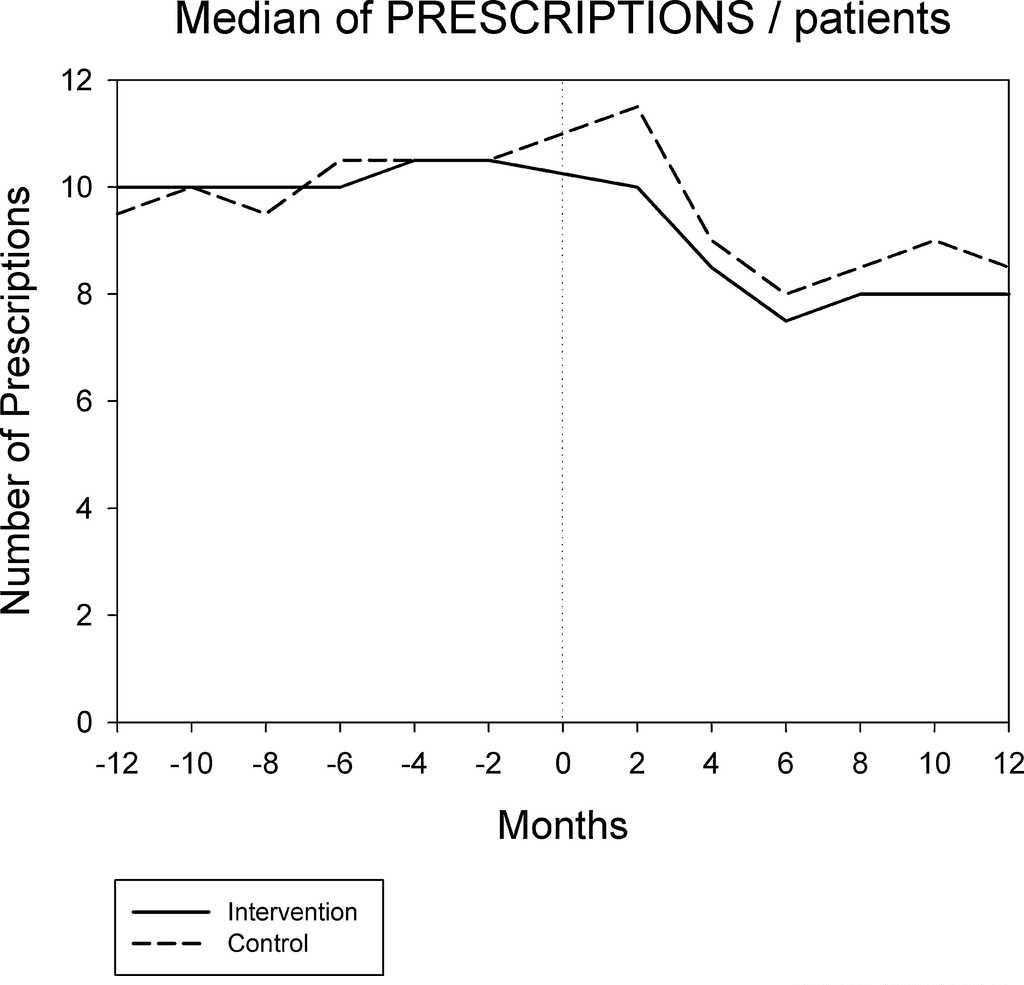 Figure 3   Evolution of percentage of generic drugs per patient 12 months before and 12 months after the intervention. 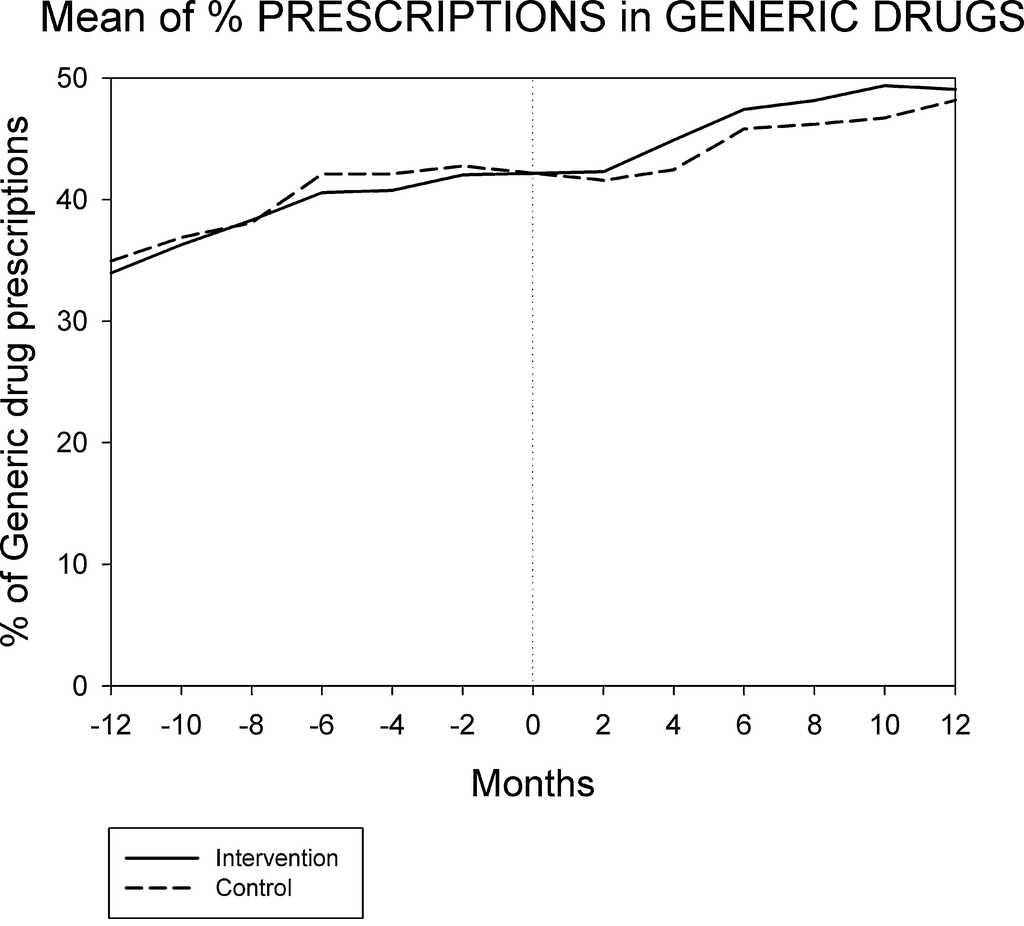 Figure 4   Evolution of percentage of new drugs per patient 12 months before and 12 months after the intervention. 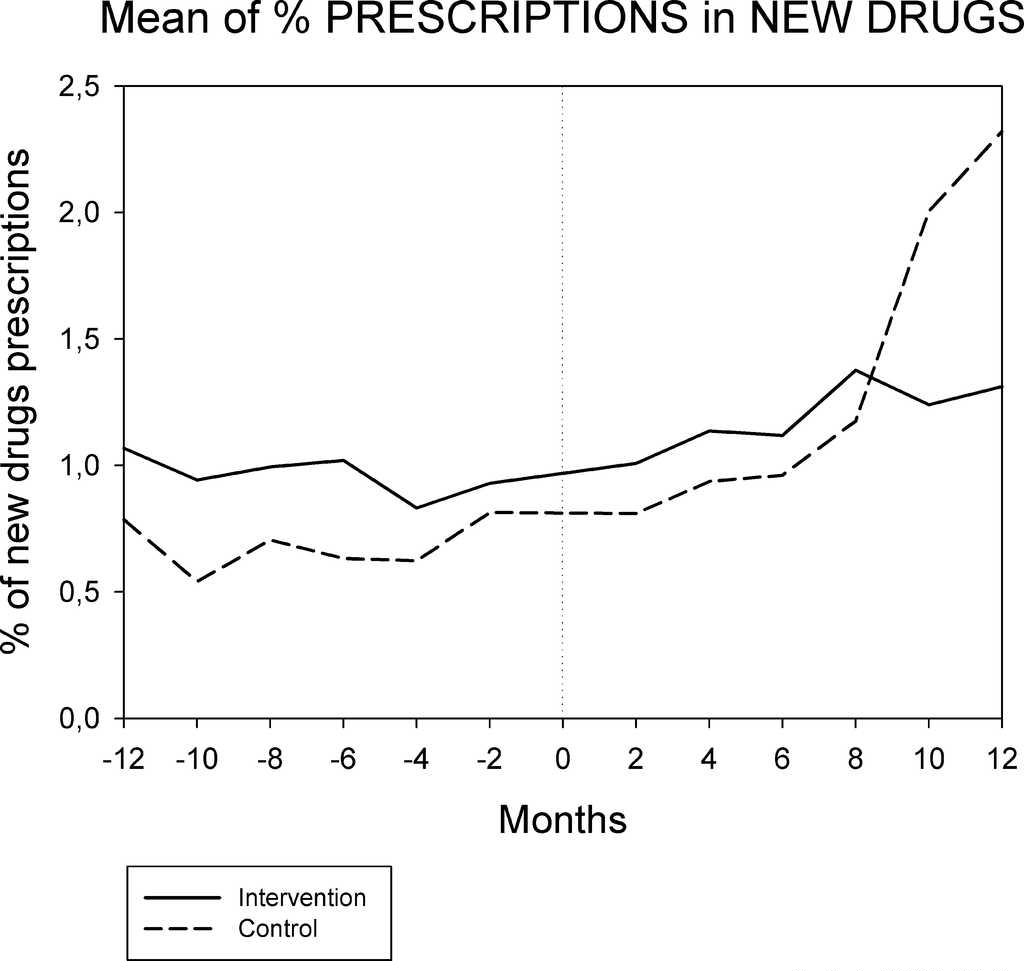 Table 1   Prescription patterns and associated annual costs/expenditures per patient before and after the pharmacist intervention.