LESSONS FROM THE FIELD

We describe the clinical impact of the RehaCom computerized cognitive training program instituted in the International Neurological Restoration Center for rehabilitation of brain injury patients. Fifty patients admitted from 2008 through 2010 were trained over 60 sessions. Attention and memory functions were assessed with a pre- and post-treatment design, using the Mini-Mental State Examination, Wechsler Memory Scale and Trail Making Test (Parts A and B). Negative effects were assessed, including mental fatigue, headache and eye irritation. The program's clinical usefulness was confirmed, with 100% of patients showing improved performance in trained functions.

The increasing number of people with disabilities resulting from acquired brain injury concerns specialists in many countries worldwide.[1-3]

Acquired brain injury refers to a lesion in a brain with previously normal development. Irrespective of its cause-whether traumatic brain injury (TBI), stroke, tumors, hypoxia or encephalitis-such a lesion may provoke physical and motor skill impairment and serious psychological consequences. The latter may affect cognition, impairing processes such as attention and concentration, memory, planning, calculations and language; as well as emotions and behavior.[4-6] These disorders severely limit individual autonomy for successful reintegration into family, work and social life.[7,8]

Growing interest in recovery from these sequelae has led to development of multiple therapeutic strategies for cognitive rehabilitation, that is, the remediation or alleviation of cognitive deficits resulting from neurological damage.[9] Cognitive rehabilitation is an interactive and dynamic training process involving the patient and treatment team.[10] The biological basis of its amelioration of neuropsychological sequelae resides in brain neuroplasticity.[11-14]

Rehabilitation services have expanded in Cuba with involvement of skilled personnel at all levels of the health system.[15] Several kinds of specialists participate in brain injury treatment, with neuropsychologists playing a fundamental role. Many work in provincial or national neurology hospitals or in neurology, neurosurgery and rehabilitation services of general, adult clinical-surgical and pediatric hospitals.[15] Among their clinical and scientific functions, these specialists verify presence, severity and location of brain injury; determine neuropsychological sequelae and which cognitive functions have been preserved; diagnose cognitive impairment at all ages; and recommend the most effective strategies for stimulation and rehabilitation of processes affected.[16]

The rehabilitation program at the International Neurological Restoration Center (CIREN, the Spanish acronym) in Havana implements advances in neurorehabilitation using an intensive, personalized, comprehensive and multidisciplinary approach.[17] Patients admitted to CIREN have suffered brain injuries, usually severe ones. A review of clinical histories and neuropsychological results of adult patients with nondegenerative lesions seen in CIREN from 2008 to 2010 found a 92% prevalence of cognitive dysfunction of varying severity. These patients received cognitive rehabilitation as well as therapy for motor sequelae.

A technology assimilation intervention using the RehaCom system was carried out at CIREN on a group of patients with cognitive disorders caused by stroke and TBI.

Objective Assess usefulness of the RehaCom system for cognitive rehabilitation of patients with acquired brain injury due to stroke and TBI.

Rationale Neuropsychological impairments caused by TBI and stroke interfere with successful social and occupational reintegration, often more so than do physical sequelae. These conditions require immediate and specialized care, since quality of life is directly related to degree of cognitive impairment and the most important concern of patients and family members is loss of autonomy. The social costs of lost productivity are particularly high when young people of working age are affected.[22]

The elevated prevalence of cognitive dysfunction associated with acquired brain injury makes cognitive rehabilitation essential. Introduction of new neuropsychological rehabilitation tools based on the latest developments in computer sciences is both necessary and scientifically challenging for health professionals, particularly neuropsychologists.

Study group Participants were 50 adult patients who met the following inclusion criteria: neurologic diagnosis of stroke or TBI, admitted to CIREN from 2008 through 2010, aged 20 to 80 years, with cognitive dysfunction per neuropsychological assessment, and seen in the Adult Static Brain Lesions Clinic. Excluded were patients with diagnosis of degenerative nervous system or psychiatric disease, aphasia, cognitive developmental delay, or who were illiterate.

All patients had motor disorders, including hemiparesis, hemiplegia and cerebellar ataxia; 76% (38/50) had vision problems (hemianopsia, diplopia, artificial eye); and 14% (7/50) had diminished hearing.

Clinical usefulness of the software was assessed using the following variables:

 Flexibility: Proportion of patients included in the study who participated in therapy irrespective of sensorimotor deficits.

 Accessibility: Ease of use for people from countries with different languages, whether from more or less developed regions or population areas.

 Safety: Acceptable balance of risk to benefits. Adverse effects during program use were assessed.

Procedures and Ethics Therapists familiarized themselves with the program for two months before commencement of patient training. A neuro psychologist performed an intial evaluation during the standard assessment week required for all patients on admission to CIREN. An external evaluator, a psychologist, administered attention and memory tests before and after training, each patient serving as his or her own control.

Patients received 60 training sessions over 12 weeks, divided into five 50-minute sessions per week. All sessions were held in the morning in a laboratory designed for this purpose, where up to four patients worked simultaneously under supervision by two specialists. Patients were monitored for possible negative effects during training.

Flexibility One hundred percent of the patients were able to enroll in treatment, irrespective of sensory and motor deficits secondary to brain injury and without requiring any special accessories.

Dynamics In 100% of cases, the program permitted personalized increases in task difficulty according to individual progress. It permitted use of a wide variety of interchangeable stimuli and objects; this versatility was conducive to keeping the patient focused on rehabilitation. Moreover, in all cases the therapist was able to monitor difficulty level and even to identify and evaluate which features of stimuli used in rehabilitation or assessment tests were most significant for the subject and whether his or her cognitive performance had improved.

Accessibility In 100% of participants, the language was successfully set to that of the patient's country of origin.

Clinical validity Ninety-seven percent of participants completed all therapy sessions. Table 1 shows pre- and post intervention results of neuropsychological tests. All cases showed reduced cognitive deficit; and all exhibited reduced completion time for both simple selective attention and executive attention, although the difference was only statistically significant for simple attention. Improvements in all parameters related to memory were statistically significant. Figure 1 displays the change in patient distribution across the range of Wechsler Memory Scale scores; at the conclusion of the intervention, there was a substantial increase in the proportion of patients in the higher ranges and a corresponding reduction in the range of greater memory impairment, demonstrating achievement of therapeutic objectives. 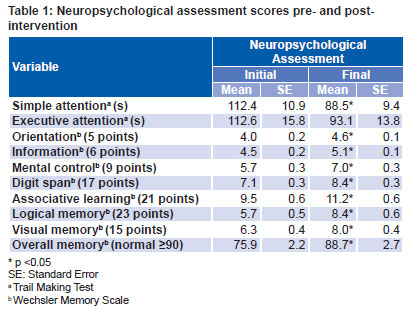 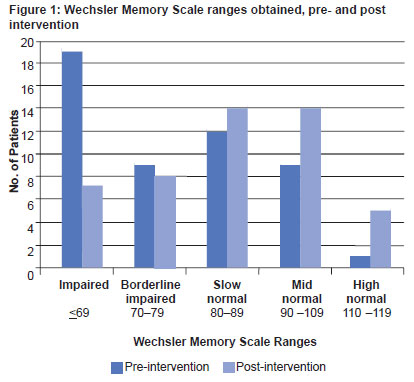 Safety Adverse effects attributable to the therapy included mental fatigue in 14% (7/50) of patients during the first six sessions. Likewise, 6% (3/50) of patients reported headache. Symptoms resolved in all patients as they progressed with therapy and became more familiar with it. These negative effects can be considered minimal and therefore acceptable in relation to reported benefits.

Objectivity In 100% of the study sample, results were monitored quantitatively and automatically during all work sessions, with completion times and number of errors recorded individually for all computerized tasks.

Progress in multimedia technology and its generalized use have led to design of applications in new areas, such as educational software for neuropsychological rehabilitation. There is considerable evidence for the modulating effect of cognitive rehabilitation on recovery from neuropsychological impairment in patients with acquired brain injury.[23,24] These interventions increase the chances of optimal recovery. From this perspective, neuropsychology is expanding its sphere of action in rehabilitation, encompassing both assessment and treatment of sequelae.

The RehaCom program has sufficient flexibility, simplicity, accessibility, dynamics and objectivity to make a useful contribution to clinical practice. Its interactive capabilities and multimedia make it possible to treat a large number of patients and keep them motivated, irrespective of multiple motor and sensory deficits. Its use enables more precise recording of patient results and increased quality of stimulation. Our results are consistent with other reports of the program's effectiveness in recovery of attention and memory, with reliable progress and transfer effects to other functions.[23,24]

The use of RehaCom has corroborated once more that sustained stimulation is a basic principle in functional recovery after brain injury.