Prevalence of risk factors for cardiovascular diseases in scholars from Londrina, PR: differences between socio-economic status

Cardiovascular diseases are responsible for most deaths in the worldwide population1 and high expenditures of governmental resources for its treatment2.The main risk factors for the cardiovascular diseases are: obesity, hypertension, dyslipidemia, diabetes mellitus and sedentary lifestyle, among others. The prevalence of such risk factors has increased in the adult population, however, have also been found high prevalence in children and adolescents 3-5.

This current Brazilian epidemiological context is result of the changes experienced by the population in their quality / lifestyle over the past decades that are strongly influenced by the economic condition 12, fact that also occurs in developed countries 13. In Brazil, until two decades ago, this condition was more prevalent in the higher social status 14. However, what we see today is a nutritional transition, in which excess body weight has been installed in higher growth rates in lower socio-economic status15. The physical activity and blood pressure (BP) outcomes are also strongly influenced by the economic condition10, 15.

As a result, the objective of the present study was to assess the prevalence of cardiovascular risk factors in children and adolescents, aged 10 to 16 years, according to socioeconomic status.

This cross-sectional study was conducted in Londrina-PR, from March to October 2008. Londrina is a city of approximately 510,000 inhabitants, being the third most populous in southern Brazil. The city has approximately 70,000 adolescents enrolled in elementary school, and 10% study at private schools. The study sample consisted of scholars, aged 10 to 16 years, of both sexes, from public and private schools.

To calculate the sample size, the 10% prevalence of hypertension in adolescents was adopted as reference, with an interval of 95% and a margin of error of 3%, as reported in previous publication16.

The initial calculation determined that 382 adolescents were to be evaluated, however, because the selection of students have been in conglomerate, the correction of the design effect of 2.0 was performed in accordance with the procedures specified by Luiz and Magnanini (2000)17. After this correction, the sample size was estimated in 764 individuals. However, predicting losses, more than 15% were added to the sample, totaling a minimum of 879 adolescents. For the sample, the city was divided into different regions: north, south, east, west, central and peripheral. The number of students from public and private schools in each region was considered for calculating the ratio of students to be selected for the sample, in order to obtain proportionality of adolescents in both school systems in each region. From each region, two schools were selected randomly: one public and one private. In each of the selected schools, the classrooms to be evaluated were selected randomly and then the class was completely assessed.

At the end of the classrooms selection process, there was a total of 1144 students and 1021 (89.2%) children and adolescents were evaluated. One hundred and twenty-three subjects erroneously filled the questionnaire or refused to have anthropometric measurements taken. In all schools the students were invited to participate and received an informed written consent form, which was filled out by parents/guardians and students, before participating in the present survey. The study was approved by the Ethics Committee of the Universidade Estadual de Londrina. All evaluators were previously trained to perform the measurements of weight, height, blood pressure and waist circumference, and the questionnaires. The scale used to evaluate body weight was calibrated before the start of the study, as well as the oscillometric device used for measuring blood pressure.

All participants in the sample were barefoot and wearing light clothing on the day of the assessments. Body mass, height and waist circumference were estimated. Body mass was measured using a Plenna digital scale to the nearest 0.1 kg. Height was measured by a portable stadiometer with a maximum length of two meters and an accuracy of 0.1 cm. After these two measures, body mass index (BMI) was calculated by dividing body mass by the square of height. Later, the children and adolescents were classified in eutrophic or overweight (overweight or obese) according to the criteria proposed by Cole et. al.(2000)18. The waist circumference was determined by measurements in duplicate in the minimum circumference between the iliac crest and last rib, using an inextensible tape in millimeters (mm). The final value of waist circumference was determined by the value of the average of the two measures. Sample participants were classified as with or without abdominal obesity, according to their age and sex, according to the criteria proposed by Taylor et. al.(2000)19. To determine the economic condition, the "Criteria of Economic Classification in Brazil", set in 2008 by the Brazilian Association of Business and Research (Associação Brasileira de Empresas e de Pesquisa - ABEP) 20 was used.

The questionnaire, that was filled out by the students in the classrooms, after explanations from a research assistant, included the education level of the parent/guardian, the quantity of bathrooms in the house, the number of some appliances (color TV, VCR/ DVD, radio, automobile, washing machine, refrigerator and freezer) and the presence of maids. The following classifications were established for socio-economic status: A1, A2, B1, B2, C1, C2, D and E. The evaluator read the questionnaire for the students and remained in the room during the fill to clarify possible questions.

After the classification of adolescents through the economic condition, the sample was divided according to the following definitions: the high socio-economic status composed by A1, A2 and B1 categories, and low socioeconomic status composed by B2, C1, C2, D and E categories. The status B2 and E were considered low by the predominance of lower educational level of the parents/guardians.

For measurements of blood pressure (BP), two cuffs of 6 cm × 12 cm were used for prepubescents and 9 cm x 18 cm for adolescents according to the criteria proposed by the American Society of Heart21. BP was measured by an oscillometric device Omron HEM-742 model, previously validated for use in adolescentes22. All subjects sat at rest for five minutes before the first measurement and the interval between the first and second assessment was of two minutes. BP measurements in adolescents were conducted solely by the researcher in charge of the project. After the two assessments, the average values of systolic and diastolic blood pressure was calculated and those with BP values above the 95th percentile, according to the criteria established by the National High Blood Pressure Education Program (2004)23 were classified as patients with high blood pressure.

In the statistical analysis, the prevalence of cardiovascular risk factors in children and adolescents was determined by the frequency. To compare the proportions of the analyzed factors in accordance with the high and low socioeconomic status, the chi-square was used. The software used for such analysis was SPSS version 13.0.

Table 1 shows the general characteristics of the sample divided according to sex. There was a higher frequency of girls (51.7%), but not statistically significant. Significant differences were observed between genders in all anthropometric variables. The averages of BMI measurements, waist circumference, BP and the score for physical activity practice differed significantly (p <0.05) between sexes. The prevalence of overweight and obesity in the sample was 18.2% (21.9% for boys and 14.7% for girls), 15.2% of boys had high waist circumference (abdominal obesity), while in girls the prevalence was 8.5%. The prevalences of high blood pressure were 13.3% and 10.2% for boys and girls, respectively. The boys were considered more active than girls, 35.4% versus 15.5% (p <0.001). 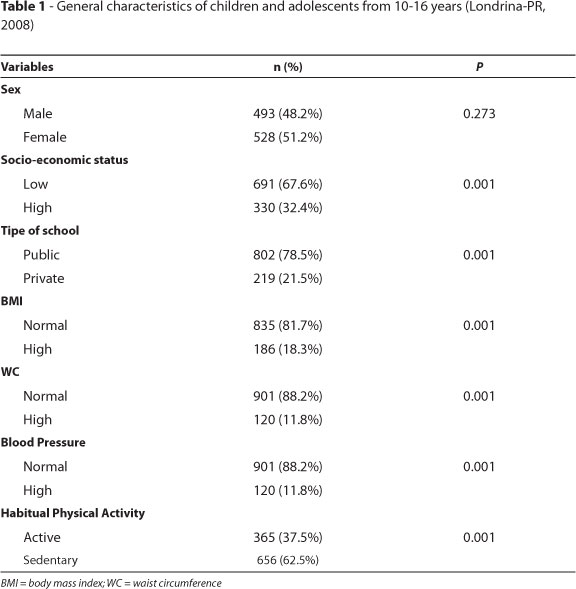 Despite the hypothesis that low-income families tend to eat foods with high energy density for being cheaper, it is also plausible to consider that the bad distribution of income does not allow adequate access to healthier foods in these layers of population28,31. Some researchers31 highlight the importance of evaluating the interaction of overweight and obesity with its risk factors in different economic conditions, given that excess body weight seems to acquire specific characteristics depending on the economic stratum in where it is analyzed. In this sense, Fernandes et al. (2008)31 observed that the school environment can be a determining factor for the higher prevalence of overweight and obesity in the high economic status, due to the higher purchasing provide greater consumption of foods.

It has been shown that people who are overweight are more likely to be affected by arterial hypertension33. However, although the prevalence of overweight and obesity is higher in the higher social status, in relation to blood pressure values no significant differences were found between the different social status, possibly due to the low power of this study because of the insufficient sample size, in detecting significant differences in prevalence with similar values.

Adolescents from high economic status presented lower prevalence of insufficient physical activity practice. The data from this study are consistent with the literature which identified greater involvement of adolescents with greater purchasing power with physical activity practice31. Several reasons seem to be responsible for such results. One is that most parents of youngsters in the high economic status are people with higher education, which promotes greater understanding of the benefits that physical activity can bring.

Another factor to consider is the higher relative number of adolescents from higher social status that are overweight or obese, which can propel them to start the practice of physical activities aimed at reducing body weight, resulting in increased prevalence of physical activity found in adolescents when compared to those of low socio-economic status.

Although the present study was conducted with a representative sample of adolescent in Londrina-PR, some limitations must be pointed out. The fact that this study is cross-sectional prevents inferences of causality between the investigated variables. It is noteworthy, however, that the objective of this was not to investigate possible causes for the studied factors, but the prevalence of concurrent cardiovascular risk factors in different socio-economic status. Another limiting factor is the assessment of blood pressure measurements have been performed in a single day, which may overestimate the prevalence of high blood pressure. However, the study highlights the difficulty of ascertaining such measurements on different days in large samples.

In summary, the present study showed that the prevalence of cardiovascular risk factors are greater in the high economic status, except for physical inactivity and high blood pressure. However, points out that it was a high prevalence of these risk factors in isolation or simultaneously, indicating that strategies are needed that aim to combat these factors.

9. Goodman E, Whitaker RC. A prospective study of the role of depression in the development and persistence of adolescent obesity. Pediatrics 2002; 109: 497-504.

13. Veiga GV, Cunha AS, Sichieri R. Trends in overweight among adolescents living in the poorest and richest regions of Brazil. Am J Public Health 2004; 94: 1544-8.

Conflicts of Interest: The authors declare no conflict of interests