Nutritional Status of the adult population in the Bolsa Família Program in Curitiba, State of Paraná, Brazil

INTRODUCTION: The Bolsa Família Program is the largest program of conditional cash transfer in Brazil, and its major goal is to reverse the current food insecurity. In spite of that, there are few studies that show the development of nutritional status for this population.
OBJECTIVE: This study aimed to describe the nutritional status of the adult population enrolled in the Bolsa Família program, in the municipality of Curitiba, PR.
METHODS: This is a cross-sectional, population-based study, performed in the health districts of the city of Curitiba, Parana, in the period from July 2006 to July 2007. We interviewed 747 adults, 18 years of age and over, of both sexes, living in the catchment area of the basic healthcare units in the city. To assess the nutritional status of this population, we measured weight (kg), height (cm), and waist circumference (WC) and calculated the body mass index. They were asked about age, marital status, occupation, number of household members, origin, and years of schooling. The association between excessive weight, waist circumference and sociodemographic co-variables was assessed by unconditional logistic regression.
RESULTS: About 40% of the population was considered of normal weight and 27.1% obese, according to BMI standards. Analyzing waist circumference data, 48.2% have measures that show a much greater risk for developing cardiovascular disease. Significant statistical association occurred between BMI increase and age (OR = 2.16; CI 95%: 1.57-2.96), sex (OR = 0.57; CI 95%: 0.33-0.97) and marital status (OR = 1.40; CI 95%: 1.03-1.88). A significant association was observed between waist circumference and age (OR = 2.93; IC 95%: 2.13-4.02) and sex.
CONCLUSION: Most of the population presented excessive weight and abdominal fat, risks for cardiovascular diseases. The results point towards the need to build and implement regional diet public policies.

The range of social policies in food and nutrition stores in Brazil developed very peculiar shape, and there are - in line with the political and economic landscape in which they operate - an apparent diversity of actions, aimed to solve problems and nutritional population1.

The Bolsa Familia program of conditional cash transfer (PTCR) of Brazil was created to benefit families in extreme poverty and hunger. Its operation consists in the transfer of monthly cash benefits to families enrolled2. This program will benefit about 47 million Brazilians and may represent up to 21% of the budget familiar3 having an impact on consumption within the family. The parcels intended for food increased4, but the food quality has not improved with a decrease in consumption of rice and beans and increased consumption of processed foods and high energy density in populations of lower income strata of the minimum wage5.

Segall-Correa et al (2008)6, in analyzing the data from the 2004 National Household Survey, found that transfer income has a positive impact in promoting food security. The PTCR may have a material impact on the nutritional status of children and adultos7 because they promote an increase in income and access to health services and education.

According Burlandy (2007)8 the PTCR has a negligible impact on the nutritional status of the population, since, for this improvement is not enough to just have more access to food purchases. We have to consider all other aspects of social and health involved.

According to the clinical nutrition presented here in Brazil, and in view of the paucity of population studies with such expressiveness, this study investigated the nutritional status of the beneficiary of Bolsa Família in Curitiba-PR.

This is a cross-sectional study conducted between 2006 and 2007, being part of the "Food and Nutritional Diagnosis of families enrolled in the program Bolsa Família in Curitiba - PR, funded by the National Council for Research and Technological Development (CNPq) The county is divided into health districts, which correspond to the demarcation of geographical space division in the regional administrations.

The municipal health system in 2006 consisted of 105 Basic Health Units (BHU), according to data released by the Ministry of Social Development and Hunger Alleviation, in March of 2005 there were 31,323 families enrolled in Curitiba Bolsa Familia program, setting up a monthly payment of R $ 1,409,571.0011.

To calculate the sample size was considered the number of families receiving the Family Grant Program in 2005, area residents to inscribe the city of Curitiba. The design of this population by health district and health unit was provided by the Epidemiology sector of the local health department município12.

The sample calculation considered the population consisted of 31,323 households, 3% tolerable error and 5% significance level, obtaining a sample for this n value of 1073 households. The districts of Bairro Novo Cajuru and were excluded from the sample, since a similar study was conducted in the year to collect data from this study, totaling 750 households.

The sampling plan until the individual's choice to be interviewed was based on techniques of probabilistic processes, using proportional stratified sample, in stages. Initially, we considered the health district (DS) as strata, to ensure that, on an unrestricted basis, representatives of the entire target population were interviewed.

To ensure the representativeness of the population in the study were selected registered families in all health units in the city of Curitiba. Thus, after splitting the sample by health district No, we proceeded to the proportional distribution of the number of households to be visited by the health unit.

For the selection of households to be interviewed, was held a draw from a numbered list of the families.

It was decided that priority would be the head of household the individual to participate in the study, and in the absence of another adult, over 18 years, a member of the household, present during the visit. If during the visit there was no one in the selected household or if all members of selected household refused to participate, the next household on the list would be addressed. Were excluded from the sample: pregnant women, people with limitations for immobilized or anthropometric measurements.

Data collection was conducted with teams of interviewers selected through the selection process. Teams participated in the nutrition course students from various universities in Curitiba, as well as newly trained nutritionists. All interviewers were trained in advance. Data collection occurred simultaneously in two health districts, and five pairs for each district were selected. To facilitate the access of households to interviewers counted on the collaboration of community health workers, who accompanied them as representatives of the health clinic where the family was enrolled.

Respondents were asked to participate in the study in order to answer the questionnaire voluntarily economic partner. Upon signing a term of informed consent, according no196 resolution of 10 October 1996, the National Health Council, proceeded to the interview.

Information was collected to describe the socio-economic profile of the population such as age, marital status, occupation, number of household members, origin, respondents' education and household head.

To obtain data on nutritional status were collected at their homes, their weight, height and waist circumference. The classification of nutritional status was based indicators of body mass index (BMI), based on cutoff points used by the Ministry of Saúde13 and waist circumference (WC) according to parameters WHO14 (less than 94 cm and 80 cm for men and women respectively).

To measure the weight digital scale was used (portable) with a capacity of 150 kg (accurate to 0.1 kg) and height stadiometer was used (portable) with a capacity of 212cm and a minimum of 0.1 cm; and measuring tape (accurate to 0.1 cm) to measure waist circumference. The standardization and quality control of anthropometric measurements were performed on the recommendation of the System of Food and Nutritional Surveillance13.

Figure 1 describes the prevalence of overweight and obesity in this population. The average body mass index of the study population was 27.3 kg/m2, and 41.1% normal, 27% obese. In relation to waist circumference, 46.2% of the population had increased risk for developing cardiovascular disease. 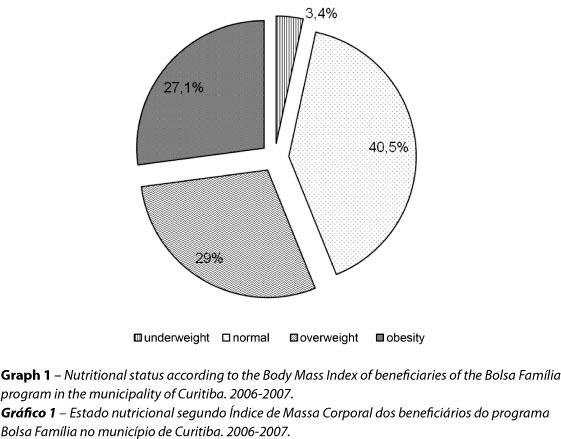 This study aimed to determine the nutritional status of adults receiving the scholarship program, families in the city of Curitiba, relating it to the socioeconomic variables. It is noteworthy that although the population has been assessed as a whole, for the classification of nutritional status were considered the cutoff points for each sex.

There was a prevalence of underweight in this population of 3% and 56% of overweight / obesity, which clearly demonstrates the nutritional transition process experienced in the country, regardless of income level, as observed by Miller et al (2004)15.

Drenowsky (2009)16 reported that poverty and obesity are closely linked. Data from the Household Budget Survey (POF) in September 2008 to 2009 show that the prevalence of obesity increased in the lower income strata, both in men and women, and this increase occurred more in the Northeast than in the South.

Study conducted with low-income families in the Northeast found a prevalence of overweight and obesity of 41.2%17. The results of this study show a higher prevalence of obesity in this population relative to that found by POF 2008-2009.

Table 1 is evidence of an association between age and excess weight determined by BMI. Literature data show that increasing age increases the chances of excess peso5,17-20. When adjusted for age and gender, the variable, marital status also showed significant association. The presence of a partner can lead to changes in diet and physical activity, encouraging weight gain21.

There was observed a statistically significant association between educational level and overweight as measured by BMI. This result corroborates Peixoto et al (2007)21 in their study of adult population in Goiás. Monteiro et al (2001)22 evaluating the effects of income and education on weight gain, observed that the years of study may be a protective factor against obesity in both genders. However, excess weight is present in 30% of women whose per capita income is less than or equal to half the minimum wage23.

A fact that should be considered specifically for this variable is homogeneity of the population. Although there is a minimal difference in sample size in relation to the categorization of the schooling variable, individuals categorized with more than four years of study have mostly to elementary education, with a very small number of beneficiaries with more than eight years of study.

This study points out key information for planning policies to nutrition, showing a high prevalence of obesity and overweight among the beneficiary population, and such condition is associated with increased risk of chronic non-communicable diseases. In this sense there is a need to work with these individuals through education actions in health and nutrition, so they are aware of taking actions that may alter their nutritional status. The results presented here show up as a subsidy for construction and implementation of regional public policy related to food.