Teachers are professionals who demand much of their voices and, consequently, present a high risk of developing vocal disorders during the course of employment.
OBJECTIVE: To identify factors associated with vocal disorders among teachers.
METHOD: An exploratory cross-sectional study, which investigated 476 teachers in primary and secondary schools in the city of Salvador, Bahia. Teachers answered a questionnaire and were submitted to auditory vocal analysis. The GRBAS was used for the diagnosis of vocal disorders.
RESULTS: The study population comprised 82.8% women, teachers with an average age of 40.7 years, teachers with higher education (88.4%), with an average workday of 38 hours per week, average 11.5 years of professional practice and average monthly income of R$1.817.18. The prevalence of voice disorders was 53.6%. (255 teachers). The bivariate analysis showed statistically significant associations between vocal disorders and age above 40 years (PR = 1.83; 95% CI; 1.27-2.64), family history of dysphonia (PR = 1.72; 95% CI; 1.06-2.80), over 20 hours of weekly working hours (PR = 1.66; 95% CI; 1.09-2.52) and presence of chalk dust in the classroom (PR = 1.70; 95% CI; 1.14-2.53).
CONCLUSION: The study concluded that teachers, 40 years old and over, with a family history of dysphonia, working over 20 hours weekly, and teaching in classrooms with chalk dust are more likely to develop voice disorders than others.

The voice is the main form of interaction between the speaker and their listeners. The integration among gestures, body and voice transmits the human emotions and desires. When produced in a complex way, the voice is sensitive to emotional disharmony and organic or functional lack of adjustment of the speech system.

Once the voice is unique to each speaker, the conceptualization of vocal quality and normality depends on an individual's cultural and temporal patterns. If the voice cannot fulfill its role of verbal or emotional message transmission, it is said there is a vocal disorder1.

In addition to the vocal demand, socio-demographic, medical and individual factors and certain occupational and work environment characteristics have been described in the literature as factors that contribute to vocal disorder2-9. The teacher is one of the professionals who most use their voice, because they depend on it in the learning-teaching process, thus having higher risks of development of such disorders.

Studies conducted in several parts of Brazil, as observed in other countries, have sought to find the frequency of vocal disorders in teachers. In the city of Belo Horizonte, Minas Gerais, a study evidenced that 61% of teachers reported vocal strain, 56% reported worsening of voice quality and 30% had already been absent from work due to vocal problems10. In the city of Mogi das Cruzes, São Paulo, a similar study showed that 57% of teachers reported occasional dysphonia, while 15.5% mentioned frequent dysphonia5. In the city of São Paulo, day care center teachers reported vocal disorders (80%) from a mild to moderate level (74%) during a period equal to or longer than four years (39%)11, and in Vitória da Conquista, Bahia, 59.2% of teachers mentioned hoarseness9. A study 12, which reviewed 15 studies on vocal disorder in teachers showed that hoarseness, vocal fatigue, and pain and strain when speaking are the most frequently reported symptoms in epidemiological studies on this theme. With regard to the working conditions of teachers, a review study3 showed that teachers reported high level of physical effort, exposure to dust or chalk dust, inadequate ventilation, standing for long periods of time, insufficient time to perform activities and studies and accelerated pace of work.

In view of the high prevalence of vocal problems in this professional category, as evidenced in the previously mentioned studies, the present study aimed to identify factors associated with vocal disorders in teachers.

An exploratory cross-sectional study was conducted with primary and secondary teachers of municipal public schools of the city of Salvador, in the state of Bahia, Brazil, between March 2006 and March 2007.

As a convenience criterion, sample selection for this study was performed in two stages. First, for operational purposes, the four educational areas selected were those closest to the Hospital Universitário Professor Edgard Santos da Universidade Federal da Bahia (Bahia Federal University Professor Edgard Santos University Hospital). In each area selected, based on a list of professionals per school provided by the SMEC, all schools with 20 or more teachers were chosen. All 24 schools that met these criteria were included in this study. They were spread around 54 districts of the city and included a total of 611 teachers. All teachers from the selected schools were considered eligible for this study and, consequently, invited to participate in it.

There were three formal refusals to participate in the study (0.49%); 25 teachers were on a sick leave during data collection (4.10%) and 107 teachers were not found in the school after three attempts to contact them, being considered losses in this study (17.51%). The final sample totaled 476 individuals (77.9% of those initially expected).

The questionnaires used were as follows: the Portuguese version of the Job Content Questionnaire (JCQ), translated by Araujo (1999)13 to observe the perception of social support, control and demand in the work environment; the Portuguese version of the Medical Outcome Study Question - Social Support Survey (MOS-SSS), translated by Chor et al (2001)14 to observe social support out of the work environment; and questions about general health, vocal complaints and professional performance, adapted from the instrument developed by Ferreira et al (2007) 15. Questionnaires and the Informed Consent Form (ICF) were directly delivered to teachers in a sealed envelope. After delivery, a date was set to return this material. When returned, the envelope with the questionnaires and ICF received a code and the teacher immediately underwent speech therapy analysis. Teachers who reported having a cold/the flu during analysis were excluded from it. Teachers were identified by their code in the questionnaire during this analysis.

Auditory-vocal analysis was conducted in a classroom, with the lowest level of noise possible. During analysis, a sample of the voice was recorded in a digital recorder, with the use of a dynamic professional microphone for quality control. This quality control consisted in another professional's analyzing a sample of analyses. The stage of vocal analysis in the school involved the use of the GRBAS scale16, which enables the classification of vocal quality according to values that vary from 0 to 3 (absence of disorder, mild disorder, moderate disorder and extreme disorder), based on certain parameters. These parameters are the following: G= Grade, R= Roughness, B= Breathiness, A= Astheny and S= Strain. The G parameter was used to characterize the presence of vocal disorder in this study, representing the speech therapists' general impression of the vocal quality of teachers, as they conducted the analysis. According to this analysis, teachers were considered "without vocal disorder" (G=0) or "with vocal disorder" (G≠0). The speech material used was the expiratory phonation of the sustained vowel /e/, the connected speech of the months of the year and counting from 1 to 20.

Parameters of analysis for the JCQ were proposed by its authors13. The cut-off point of the MOS-SSS was defined in tertiles, according to the variation in score possible in the test17.

Taking into consideration the fact that this study had an exploratory nature, where no hypotheses are tested and no main association is analyzed, multivariate analysis processes were found to be unnecessary.

The research project that originated this study did not result in conflict of interests and it was approved by the Bahia Federal University Professor Edgard Santos University Hospital Ethics Committee. All participants signed an informed consent form, according to the Conselho Nacional de Saúde/Ministério de Saúde's (Brazilian Health Ministry/National Health Council) Resolution 196 of 10/10/1996. At the end of the study, each participating teacher received a report on their analysis and was informed about services for speech therapy and otorhinolaryngological care. 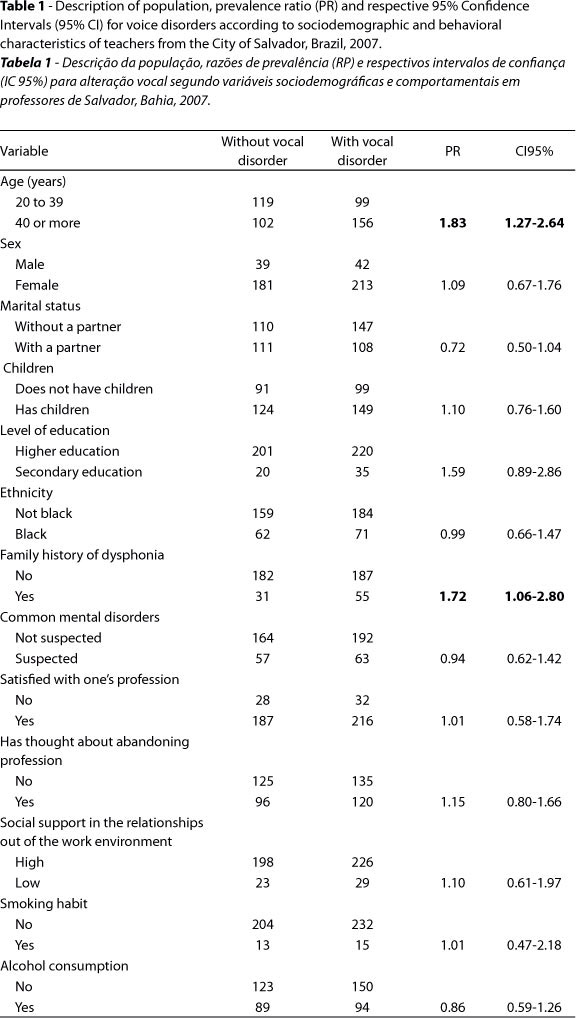 Table 2 shows the result of the investigation of the association between the teachers' work environment and organization characteristics and vocal disorder, where it can be observed that the "weekly working hours" (PR=1.66 CI95% 1.09-2.52) and "chalk dust in the classroom" variables (PR=1.70 CI95% 1.14-2.53) are associated with vocal disorder in a positive and statistically significant way, unlike the association with the variables originated from the JCQ: control, demand, social support from work colleagues, and social support from the boss. 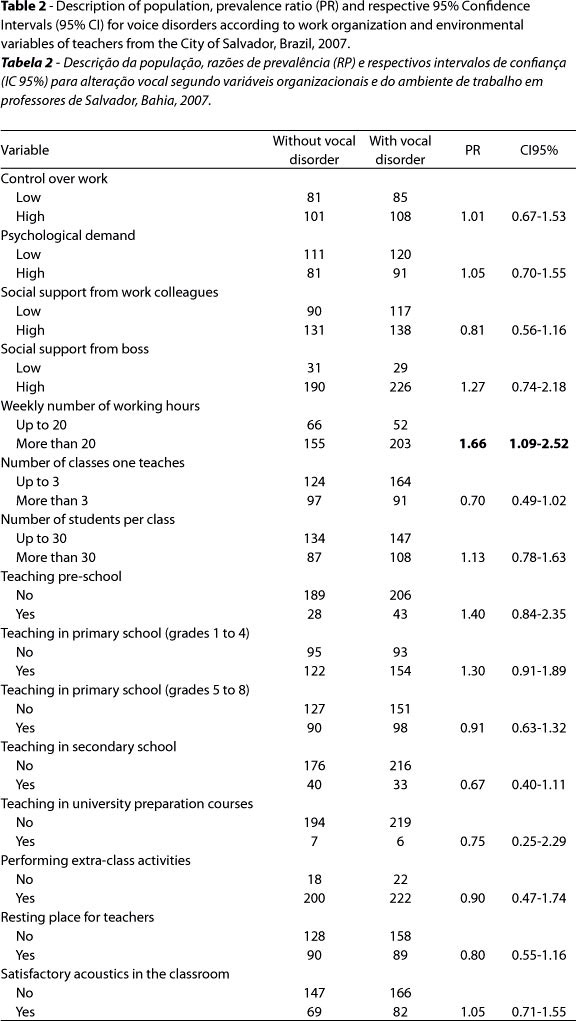 None of the aspects related to situations of violence or indiscipline in the teachers' work environment was associated with vocal disorder (Table 3). The same occurred with the variables related to medical conditions and vocal abuse of teachers (Table 4). 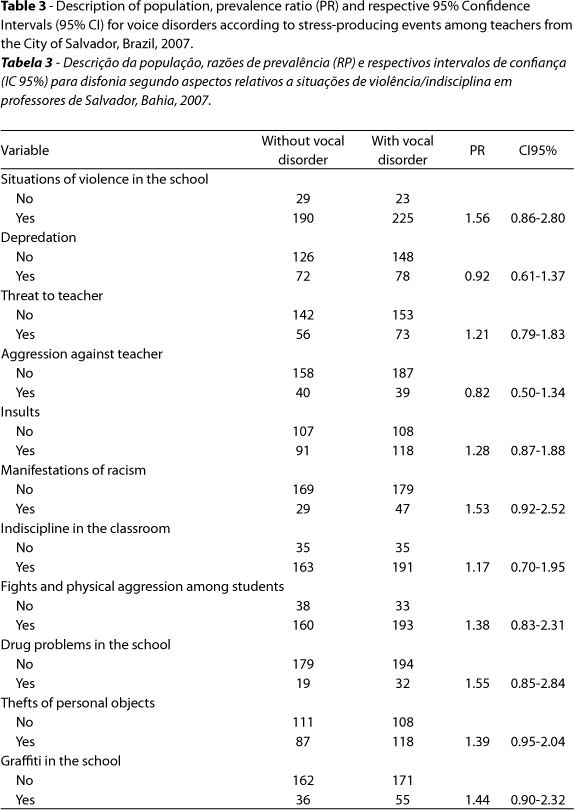 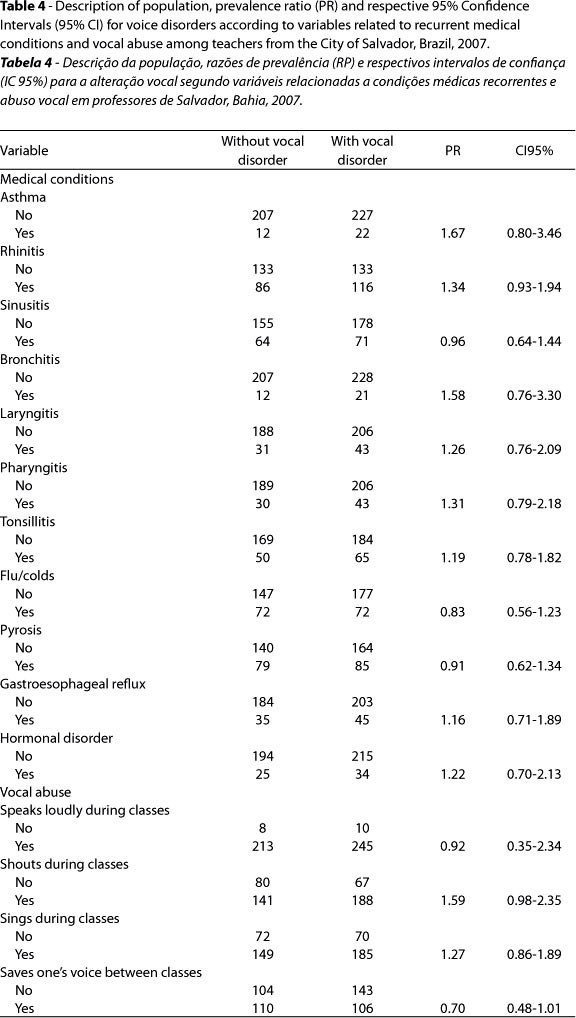 Several factors pose a risk to teachers' vocal health. These professionals use their voice to influence, to convince, to give emphasis and to pass on knowledge. Changes in the teacher's voice can lead to stress and frustration, negatively affect their ability to teach and cause social and economic losses2.

The present study found a prevalence of 53.6% of vocal disorders in teachers, according to the auditory-vocal analysis performed by speech therapists, a lower result than that found by Simões and Latorre, who observed 79.6% of change in the voice quality of the teachers studied.11 Other studies based on the reports of participants showed data that were similar to those of Araújo et al 9, who found a prevalence of 59.2%, and those of Fuess and Lorenz 5, with 57%. The similarity of results, in contrast to the difference in methods, can indicate that teachers are aware of their vocal problem, as shown in a study conducted by Simões and Latorre11.

The association between age and vocal disorders is not supported by studies conducted by Fuess and Lorenz 5, Simões 18 and Alves 19. These three studies, among others, point to age not being associated with vocal disorders in teachers. Vocal strain resulting from continuous exposure to harmful factors for voice health could be hypothesized to explain the association found in this study.

The association between family history of dysphonia and vocal disorder in teachers is not clear in the literature. Although there may be cases of hereditary malformation of the laryngeal structure that compromise voice quality, it is believed that the association found in the present study is mostly due to individuals' emotional and relational aspects and factors in the domestic environment. In other words, the same social (speaking loudly, shouting, clearing the throat, frequently drinking cold beverages etc.) and physical environments (allergens and others), which cause a family member's vocal disorder, can contribute to teachers' vocal disorders.

The association between the number of working hours and vocal disorders is in agreement with a study conducted by Fuess and Lorenz5 and another by Provenzano and Sampaio20. In the latter, the authors pointed out that 78% of teachers going on sick leaves in the state of Rio de Janeiro work 40 hours per week or more. The association analyzed can be explained, considering the fact that the higher the number of working hours, the greater the use of one's voice and the resulting strain, which may cause vocal fatigue21.

With regard to the teachers' work environment, the association between chalk dust and voice disorders was also mentioned in a study conducted by Silvany Neto et al 22. Such association can be explained by nasal and laryngeal mucosa irritation due to inhalation of chalk dust.

Although the present study have limitations, such as the cross-sectional design of the data collection method and the lack of acoustic treatment in the environment where teachers' voice quality assessment was performed, it can be concluded that voice disorders are multi-causal in terms of their etiology and that factors out of the work environment contribute to the onset or aggravation of such disorders.

The present study concluded that teachers aged 40 years or more, with a family history of dysphonia, working more than 20 hours per week and teaching in classrooms with the presence of chalk dust have a higher risk of developing vocal disorders than others.