OBJECTIVE: To estimate the Tuberculosis treatment drop out prevalence and the variables associated in the patients registered in the Tuberculosis Control Program in Sapucaia do Sul (Brazil), between 2000 and 2008.
METHOD: A cross-sectional study was conducted, which was based on the notified data in Information System for Disease Surveillance of the City Health Secretariat.
RESULTS: From the 632 cases included in the study, 65 (10.3%; 95%CI  7.9-12.7) were classified as treatment abandonment. Between 2000 and 2004, the prevalence of noncompliance was 12.7% (95%CI 9.1-16.2), and in the period 2005 to 2008 decreased to 7.0% (95%CI 4.0-9.9). In the crude analysis, we find association with sex, age and AIDS presence. The adjusted analysis with the Poisson regression didn't show significant differences between the independent variables.
CONCLUSIONS: The analysis showed reduction in the prevalence of noncompliance with the creation of Tuberculosis Control Program, from 2005, although the confidence intervals are shown superimposed. Still, the prevalence of noncompliance was high and stove above the 5% target, agreed between levels of government.

Tuberculosis is an old public health problem in Brazil and worldwide. According to the World Health Organization (WHO), in 2008 and according to the number of cases, Brazil was among the 22 countries responsible for 80% of all tuberculosis cases in the world1. With regard to mortality, the estimated occurrence was approximately 8,400 deaths attributed to tuberculosis, which is equivalent to a rate of 1.3 deaths per 100,000 inhabitants1-6. Since 2003, tuberculosis control has been prioritized among public health policies7-9.

In 2008, in Brazil, a total of 73,000 cases were reported and consolidated in the Sistema de Informações de Agravos de Notificação do Ministério da Saúde (SINAN/MS - Health Ministry Information System on Disease Notification), corresponding to an incidence rate of approximately 38.2 cases per 100,000 inhabitants, of which 4,500 resulted in deaths. This is the fourth cause of deaths from infectious diseases and the first cause of deaths in AIDS patients9.

Currently, 24 cities in the state of Rio Grande do Sul concentrate about 80% of cases, the majority of which are in the Metropolitan Area of Porto Alegre. One of these cities is Sapucaia do Sul, which comes in 10th place in this state10,11.

Early identification and follow-up of all diagnosed cases and treatments completed to obtain a cure are part of the disease prevention and control strategy, because they eradicate foci of infection in the community, thus interrupting the chain of transmission12. In their turn, treatment drop-out, inadequate drug use, irregular drug administration or inadequate drug dosage are important causes that make it more difficult for diseases to be eliminated. In addition, they can result in the development of bacterial resistance and its spread13-16.

In 2005, the Brazilian government made a pact with the WHO, aiming to cure 85% of all estimated tuberculosis cases and maintaining the number of treatment drop-out cases worldwide below 5%2-8. The reduction in the frequency and mortality from tuberculosis is one of the Millennium Development Goals (MDGs), requiring a detection rate of 84% and a cure rate of 87% by 201517. In Rio Grande do Sul, in 2007, the incidence of tuberculosis was 41 cases per 100,000 inhabitants, the death rate was 3.7 cases per 100,000 inhabitants and the percentage of treatment drop-out was 11%. Consequently, the percentage of cure of at least 85% has not been reached yet, which would be higher than the MDGs11.

The present study aimed to establish the prevalence of noncompliance to tuberculosis treatment and associated characteristics in patients who joined the Tuberculosis Control Program in the city of Sapucaia do Sul (RS), between 2000 and 2008.

The city of Sapucaia do Sul is situated in the Metropolitan Area of Porto Alegre, in the state of Rio Grande do Sul, with an estimated population of 126,085 inhabitants according to the 2008 IBGE, an area of 65.2 km2 (42.1 km2 of urban area and 23.1 km2 of rural area) and demographic density of 2,084.3 inhabitants/km2. The city's main economic activity is industry (79.05%), followed by commerce, services and agriculture (20.95%)18.The Municipal Health Network is comprised of 18 primary health units, of which 13 adopted the Estratégia de Saúde da Família's (ESF - Family Health Strategy) principles and five are secondary referral units. Of these five, one is a tuberculosis referral unit, another is prepared to deal with TB-HIV co-infection, including a CAPS AD (Psychosocial Care Center for Alcohol and Other Drugs), a mental health outpatient clinic and women's health care clinic. In addition, there is the support from a primary bacilloscopy mycobacterial culture laboratory, a municipal hospital and a 24-hour emergency unit18. The entire municipal health network is prepared to operate in the Programa Municipal de Controle da Tuberculose (PMCT - Municipal Tuberculosis Control Program).

A cross-sectional study was conducted, based on secondary data reported in the SINAN of the Secretaria Municipal de Saúde (SMS - City Health Secretariat)19.

The study population was comprised of all tuberculosis cases reported in the SINAN/SMS, residents of the city of Sapucaia do Sul (RS), between 2000 and 2008, totaling 749 cases.

Data were collected from the DATASUS/SINAN/SMS database, the tuberculosis case treatment control and record book (black book), and the archives with tuberculosis report/investigation files.

SINAN/SMS data were obtained from operational reports found in the TABWINTB, installed in the same system. In addition, an Excel spreadsheet was developed to analyze cases such as those that had been closed due to death, in relation to age group and associated health problems.

In the present study, cases were classified as follows: "tuberculosis cases", when individuals had their diagnosis confirmed by bacilloscopy or culture or by doctors, based on clinical-epidemiological data and complementary tests; "new cases", when individuals had tuberculosis, although they had never used anti-tuberculosis drugs or used these for less than a month; and "drop-out", which were the cases that had stopped taking anti-tuberculosis drugs for more than 30 consecutive days4,12.

The following independent variables, which were available in the system, were analyzed in this study: sex, age (in complete years), self-reported ethnicity, level of education (in complete school years), classification of entry in the Program, and presence of certain associated health problems, such as AIDS, alcoholism, diabetes and mental disease.

Data were entered using the Microsoft Excel software program. In 2005, the decentralization of the PMCT was implemented in Sapucaia do Sul. Thus, the prevalences of treatment drop-out between 2000 and 2004 and between 2005 and 2008 were shown, with the respective 95% confidence intervals. The crude analysis of data on treatment drop-out during the entire period was performed with the SPSS software program, where effect measures, 95% confidence intervals and statistical tests were calculated. The Stata Program was used to perform the adjusted analysis using Poisson regression and robust variance20. Variables that had a p-value of 0.10 were included in the model.

The individuals included in the present study were mainly males (69.5%), aged between 20 and 39 years (47.4%) and white (89.5%), had between four and seven years of education (55.2%), and were included in the Program as new cases (91.0%). With regard to the distribution of associated health problems, the following prevalences were observed: AIDS, 16.3%; alcoholism, 36.5%; diabetes mellitus, 13.3%; mental disorders, 6.0% (Table 1). It should be emphasized that the prevalences of health problems were calculated according to the total number of participants, the percentage of lack of information was 68.0% for AIDS; 9.2% for alcoholism; 77.0% for diabetes mellitus and 79.0% for mental disorders.

In the crude analysis, there were higher prevalences of treatment drop-out among men, individuals who had joined the Program again and those who had AIDS. Differences in the estimates of prevalences were significant (Table 1).

Ethnicity, level of education and certain health problems (alcoholism, diabetes mellitus and mental disorders) were not associated with the outcome (Table 1). 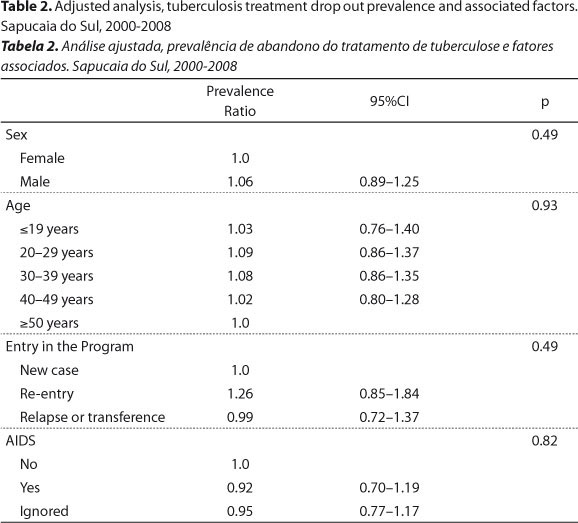 The use of secondary sources is criticized due to the possibility of underreporting and classification errors. With the implementation of the PMCT in 2005, socio-demographic data collected with the SINAN, in Sapucaia do Sul, apparently did not show any problems in terms of completion, consistency and classification.

However, it should be emphasized that, in the first years of the study, there were difficulties related to the diagnosis of health problems associated with tuberculosis, such as AIDS, alcoholism, diabetes and mental disorders. These problems appeared in 75% of cases as "ignored", hindering the consistency and analysis. Sometimes, for example, the team identified drug abuse or dependence during the follow-up of cases and the completion of the SINAN was inconsistent with regard to Mental Disease21, which remained as "ignored". Likewise, a great number of individuals had not had an HIV test when joining the program, which could have affected the diagnosis of AIDS19.

In the context of tuberculosis in the state of Rio Grande do Sul, the city of Sapucaia do Sul was considered to be a priority. With the creation of the PMCT, this city began a process of decentralization of tuberculosis program actions for primary care and implemented the Directly Observed Therapy Short-Course (DOTS). The analysis showed a reduction in the prevalences of treatment drop-out with the creation of the Program, although confidence intervals overlapped. Nonetheless, the prevalence of noncompliance was considered to be high, above the goal of 5% agreed upon among the different levels of government1,14,15. Currently, it is known that 8% of patients in Brazil who begin treatment subsequently drop out of it. "The objective of the Programa Nacional de Controle da Tuberculose (PNCT - National Tuberculosis Control Program) is to detect tuberculosis early and treat patients quickly", guaranteeing treatment to all individuals diagnosed with the disease9. In the Metropolitan Area of Porto Alegre, where Sapucaia do Sul is included, the prevalence of noncompliance to treatment was approximately 14%11. Other Brazilian studies13,22-24 showed percentages of prevalences of discharge due to drop-out varying between 10.2 and 27.3%. A study conducted with the IAPI Health Center Tuberculosis Service of Porto Alegre (RS), found a percentage of 10.2% of patients that did not adhere to the treatment24. Another study performed in the city of Pelotas (RS), together with the city's Tuberculosis Control Program, found that approximately 20% of the patients did not adhere to the treatment23, whereas there was a prevalence of noncompliance of 12.4% in Belo Horizonte, (MG)13. In Cuiabá (MT), a historical cohort study found a global incidence of 27.3% of treatment drop-out 22.

In Brazil, epidemiological studies have shown that tuberculosis is more frequent among men and individuals aged between 20 and 39 years and with a low level of education25,26. These studies prove that such disease is closely associated with poorer socio-economic conditions25-27. In the present study, the following individuals showed differences in the estimate of prevalence of noncompliance in the crude analysis: males, those who joined the program again, and those diagnosed with AIDS. With regard to age, there was a statistically significant difference, with an increase in the prevalence of noncompliance among young adults aged between 20 and 39 years. Although there was no association in the adjusted analysis, the findings of the present study could be an indication of the possibility of interruption of treatment for health services and they were also observed in other studies performed worldwide1,8,9.

By assessing tuberculosis control strategies performed in Brazil8, the PNCT Coordinating Office analyzed the strategies proposed for Brazil and the world between 1980 and 2007. Based on the context presented, it could be concluded that, although governments have established pacts to work on prevention with the BCG vaccine in 100% of cases, to diagnose 70% of patients, to treat and cure 85% of cases, to maintain the level of treatment drop-out below 5% and to reduce morbi-mortality by half until 2015, the results shown point to the difficulty in making these indicators effective and in achieving them. Consequently, new challenges to implement such measures are posed.