Adolescence is a phase of great social, cognitive, and body changes1, besides those changes related to relationships between adolescents and sexuality1.

Among the different problems and issues that keep defying development policies in Brazil and Latin America, adolescence is surely one of the most important ones. In the past decades, it has been the object of study by different professionals, and its importance is currently connected to different dimensions and fields, such as education, health, culture, citizenship, violence and poverty2. The search for an identity and for new experiences, as well as the curiosity, omnipotence and defiance bring about the feeling of invulnerability, which characterizes this group as potentially vulnerable3-4 when associated with the short life experience and sociocultural and economic factors, which may be also associated with family factors.

In this sense, and also due to the social changes of the past decades, the sexual life of adolescents begins earlier. This fact shows a lot of inequalities when analyzed by gender, ethnicity/color, schooling and socioeconomic status. Such differences influence the health relations of this population, resulting in worst morbidity and mortality indicators5. The early sexual initiation is associated with the non-use or the inappropriate use of contraceptive methods and its consequences, that is, early pregnancy, sexually transmitted diseases (STDs), Aids; besides, it is associated with smoking, alcohol consumption and other drugs1.

The unintentional pregnancy is one of the negative consequences of the sexual initiation among adolescents. For full-term pregnancies, adverse consequences may be expected both for the child and the mother1.

In order to monitor these actions with this audience, the Ministry of Health and the Brazilian Institute of Geography and Statistics developed the first National Survey of School Health (PeNSE)6, in 2009. The objective of the study was to broaden the knowledge regarding the health of this population, showing evidence to guide actions of health promotion directed to this age group. The research also had the institutional support of the Ministry of Education.

The monitoring of health in adolescents is already established in more than 40 countries in the world and has helped to change schedules and restructure health programs directed to this age group7-9.

PeNSE was the first national initiative that directly addressed the adolescents with questions about risk and protective factors. Therefore, it is an important tool for managers, parents, health professionals and educators10.

The objective of this paper is to describe situations related to the sexual health of adolescents, according to PeNSE.

This is a cross-sectional descriptive study performed with students of the eighth grade of Elementary School of public and private schools of the Brazilian States and the Federal District, from March to June, 2009.

The sample was comprised of students by conglomerates in two phases; the first phase consisted of a selection of schools, and the second of the selection of groups, followed by interviews with students in the selected groups10.

The sample was calculated to provide proportion (or prevalence) estimates regarding some characteristics of interest in each geographic stratum, with a maximum error of 3% and a 95% confidence level10.

In total, 1,453 schools and 2,175 groups were analyzed, comprised of 68,735 frequent students; out of these, 63,411 were present for data collection, accounting for 7.7% of losses in this phases; 501 students who denied participation and those who did not fill in the variable "gender" were excluded from the sample. Thus, data related to 60,973 students were analyzed, with a general non-response rate of 11.3%10,11.

In each of the eighth grade groups selected, all the students were asked to answer the questionnaire; those who did not feel encouraged to do so were considered as losses.

The Personal Digital Assistant (PDA) was used for individual data collection. The self-employed questionnaire has thematic modules on different risk and protective factors, among which are sexuality and guidance received at school about STDs, Aids and contraceptive methods.

Situations related to the sexual health of adolescents in the eighth grade were analyzed. The variable "having had a sexual relationship at least once" was described as to gender, age, maternal schooling, ethnicity/color and going to a public or private school. This variable was also described by the Brazilian state capitals according to gender.

The study was approved by the Research Ethics Committee of the Ministry of Health, protocol n° 005/2009, regarding Registration nº 11,537 of the National Commission on Ethics in (CONEP/MS) on July 10, 2009.

The Statute of the Child and Adolescent provides autonomy for the adolescent to take initiative, such as to answer a questionnaire that does not offer risks to health. Since the research aims at subsidizing health protection policies for this age group, it was chosen to give the adolescent the autonomy to decide whether or not to participate in the research. The student chose to participate or not, and could answer the questionnaire completely or partially. The informed consent form was distributed in the PDA by the student. The information concerning the students is confidential and unidentified, as well as the ones regarding the school11.

The study was conducted after the contact with the State and Municipal Secretariat of Education and with the boards of the selected schools. 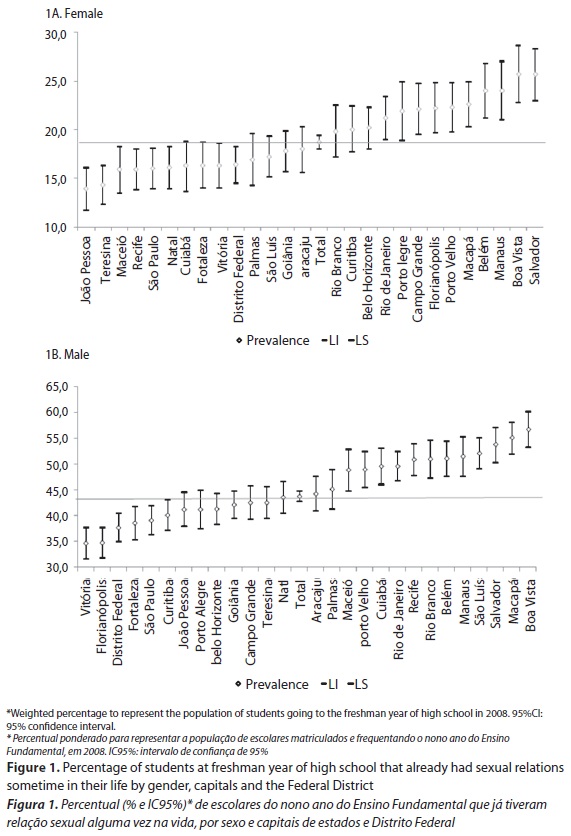 According to data from PeNSE, approximately one third of the adolescents had already had sexual intercourse at least once, mostly males and those who go to public schools. The age at the first intercourse was early, and most reported having only one partner in the lifetime. The use of condoms and contraceptive methods was high.

International comparisons show that the age of sexual initiation varies between countries. A study conducted from 2005 to 2006 by the World Health Organization (WHO)1 showed that 22% of the adolescents had already had sexual intercourse at the age of 15, with the proportion of 5% in Macedonia and 61% in Greenland, which reveals important cultural differences.

In the United States, a survey conducted in 2007 with students from the 9th to the 12th grades (equivalent to High School) observed that 47.8% of the students had had sexual initiation, and 89.5% had received guidance as to STDs/Aids at school12.

Data from this analysis should be contextualized with international studies in relation to age groups. At PeNSE, the sample is comprised of students aged 13 to 15 years (88%); for studies from WHO, the students who respond to this group are older than 15; and in the United States, they go to high school, that is, they are aged between 14 and 17 years, time of life when a higher proportion of sexual initiation is expected.

Discussing about sexual initiation in adolescence also means discussing about sexuality in adolescence, which should be analyzed from a social and historical perspective16. It is important to consider not only the natural aspect of sexuality, but also to understand it as a cultural construction. As cultural data, it is possible to understand that sexuality implies knowledge, learning, skills and concrete social possibilities coming from conceptions, values, attitudes and social skills, which are different from person to person and from group to group17.

Among these chances, it is possible to emphasize the sexual initiation stimulation caused by media and group pressure, especially considering the male gender; in this case, the early initiation is highly encouraged, there is a higher tolerance to single maternity and a different appreciation for virginity in adolescence18-19.

In this study, out of the students who had had sexual intercourse, around 76% used a condom in the last relation. The incidence and prevalence of STDs have increased, even among adolescents20. They are vulnerable to HIV infections, considering that 25% of the new infected patients in the world are under the age of 211,21.

The act of using condoms protects against unwanted pregnancy and also STDs, including HIV. The condom is the most used contraceptive method among adolescents. Not using condoms constitutes a marker of risky sexual intercourse. Other risky behaviors are: early sexual initiation, multiple partners, use of alcohol and drugs before intercourse1.

WHO publicized a survey conducted with adolescents aged 15 years in more than 40 countries in 2005 and 2006, in which 77% of the participants reported using a condom in the last intercourse, considering a higher prevalence for men (81%) than women (72%)22. In Spain, a survey performed with 15 year-old students showed that 78.8% of men and 82.0% of women used a condom in the last sexual intercourse23. In the United States, a survey conducted in 2007 with students from the 9th to the 12th grade (similar to high school) showed that among those who had had sexual intercourse, 61.5% used a condom during the last intercourse12.

Therefore, the data presented in this study show that in Brazil the frequency of adolescents who use condoms is close to the data from international studies, being even higher than the frequency for North-American adolescents. This shows that educational campaigns and messages have been reaching the target audience. However, about 25% of the participants did not use protection in the last intercourse, although more than 80% reported having received guidance regarding STDs /Aids and pregnancy prevention.

The importance of attention and preventive education related to sexual health and sexual guidance for adolescents has been officially recognized by many organizations and national and international institutions. In Brazil, by means of the STDs/Aids and viral hepatitis department and the Ministry of Education, the Ministry of Health has implanted, since 2003, the project Saúde e Prevenção nas Escolas (SPE - Health and Prevention in Schools), which consists of integration the areas of education and health to develop actions directed to sexual and reproductive health of adolescents and to reduce vulnerability to STDs and Aids. In 2008, when the Federal Government created the program Saúde na Escola (PSE - Health at School), these actions were extended for a significant number of schools so a broader approach on sexual and reproductive health is expected in the schools of the country.

Based on the presented results, it is possible to observe that Brazilian adolescents have had sexual intercourse earlier, which leads to the need to promote guidance, support and protection to this population for their early experiences so they can be able to deal with it in a more responsible, safe and calm way. In this sense, the support of family, school and health professionals is essential. Public policies, programs and projects that consider sexual education and vulnerability as guidance, which enables them to understand and interact with different individual and social aspects, should be established to prepare the subjects to live in the world of today and tomorrow.

Study carried out at the Secretariat of Health Surveillance of the Ministry of Health.
Financial Support: Ministry of Health
Conflict of interest: nothing to declare.
Submitted on: 05/01/2011
Final version presented on: 03/02/2011
Accepted on: 04/02/2011