OBJECTIVE: To describe the regional and socio-economic distribution of consumption of added sugar in Brazil in 2002/03, particularly products, sources of sugar and trends in the past 15 years.
METHODS: The study used data from Household Budget Surveys since the 1980s about the type and quantity of food and beverages bought by Brazilian families. Different indicators were analyzed: % of sugar calories over the total diet energy and caloric % of table sugar fractions and sugar added to processed food/ sugar calories of diet.
RESULTS: In 2002/03, of the total energy available for consumption, 16.7% came from added sugar in all regional and socio-economic strata. The table sugar/ sugar added to processed food ratio was inversely proportional to increase in income. Although this proportion fell in the past 15 years, sugar added to processed food doubled, especially in terms of consumption of soft drinks and cookies.
CONCLUSIONS: Brazilians consume more sugar than the recommended levels determined by the WHO and the sources of consumption of sugar have changed significantly.

The chemical definition of "sugars" refers to a group of compounds comprised of carbon, hydrogen and oxygen atoms, subdivided into monosaccharaides - such as glucose, fructose and galactose - and disaccharides - such as sucrose (glucose and fructose) and lactose (glucose and galactose)1. From the point of view of their effect on health, two types of sugar should be emphasized: those naturally found in foods, such as fructose and sucrose present in fruits and lactose present in milk; and those extracted from foods (sugarcane, beetroots and corn) for subsequent consumption in culinary preparations or in the manufacturing of processed foods. The latter group of sugars is known as added sugars2. The present study will use the term "added sugars".

The data used in this study derived from the Household Budget Surveys (HBS) conducted by the Instituto Brasileiro de Geografia e Estatística (IBGE - Brazilian Institute of Geography and Statistics) in the following periods: between March 1987 and February 1988, between October 1995 and September 1996, and between June 2002 and July 2003. The last survey included a probabilistic sample of the entire country, when 48,470 households were studied (of which 13,848 were situated in metropolitan areas). In previous surveys, the probabilistic samples referred to the group of households from the metropolitan areas of Brazil (Belém, Fortaleza, Recife, Salvador, Belo Horizonte, Rio de Janeiro, São Paulo, Curitiba, Porto Alegre, Goiânia and Brasília), with 13,611 households studied in 1987/88 and 16,014 in 1995/96. The complex sample procedures used in the surveys have been thoroughly described in specific publications14-16.

The information about foods purchased by each household was obtained with the research collective spending booklet. In this booklet, all foods purchased during a period of seven consecutive days were recorded, including the amount, cooking measures with their equivalent metric measures in weight or volume, amount spent, place of purchase, and the way foods were obtained (through monetary or non-monetary means).

Researchers chose to adopt groups of households as unit of study, considering that the adequate characterization of the food purchase pattern in each household studied could be compromised by the reduced number of days (a period of seven days) used to collect information about foods purchased by each household. Homogeneous households, according to their socioeconomic level and geographic location, were grouped into 443 strata (defined in the original sampling plan of the study) and used to describe the sugar consumption pattern in 2002/03. The mean number of households studied in each of the 443 strata of the 2002/03 HBS was 109.6 (varying between 9 and 804).

Information from the "Sistema IBGE de Recuperação Automática (SIDRA - IBGE Automatic Retrieval System)* had to be used to perform the analyses of sugar consumption trend in metropolitan areas, because the quantity (in grams) of each product purchased in each household were not available in the 1987/88 and 1995/96 surveys. The SIDRA provides detailed information about the purchase of foods and beverages, according to groups of households corresponding to ten intervals of income in each of the 11 areas surveyed, adding to 110 groups of households (units of study) in each one of the three periods studied (1987/88, 1995/96, 2002/03). The mean number of households surveyed in each of the 110 units originated from the samples of metropolitan areas was 123 in 1987/88 (varying between 45 and 351), 146 in 1995/96 (varying between 47 and 474) and 65.7 in 2002/03 (varying between 15 and 228). The weighting factor of each unit of study always resulted from the sum of sample weighting factors of households included in each unit in each survey.

The following indicators were constructed in the present study: percentage contribution of added sugars to the total amount of calories purchased; and the fraction of total sugar from "refined sugars and other caloric sweeteners" and "sugars added to processed foods by industries".

First, the inedible fraction of the total amount in grams of each food obtained by households was excluded, when necessary, by applying correction factors recommended by the IBGE.** The quantity ofeach food was subsequently converted into calories using the Tabela Brasileira de Composição de Alimentos (TACO - Brazilian Food Composition Table), version 1***, or the official US Food Composition Table, version 15****, when a certain food was not available in the Brazilian table. Daily per capita energy availability was obtained by converting weekly records of purchase of foods of each unit of study into calories, adding up the total number of records and dividing the result by the sum of individuals in each unit of study. In the specific case of conversion of calories from added sugars, the calculation involved the following two steps: conversion of amounts (in grams) into calories from carbohydrates (using the TACO table whenever possible); and conversion of calories from carbohydrates into the corresponding calories from added sugars (using the American table, as the Brazilian table does not include details about the types of carbohydrates of each food).

Both "refined sugar and other caloric sweeteners" and "sugar added to processed foods by industry" were considered to calculate the calories from added sugars. Other caloric sweeteners included rapadura (a type of candy made from sugarcane juice), molasses, honey, corn syrup and fructose. The remaining sugars naturally found in foods, such as fructose in fruits and lactose in milk, were considered as part of the remaining calories not coming from added sugars.

Based on the 2002/03 HBS, the mean daily per capita availability of "added sugars" (and respective confidence intervals) was estimated for the entire country and for the five Brazilian regions, divided into urban and rural areas, in addition to quintiles of per capita income distribution.

The percentage distribution of foods selected in the total household availability of "added sugars" was described for the country and according to quintiles of per capita income distribution. For this purpose, the foods purchased by families were divided into two source groups: 1) "refined sugar (sucrose) and other caloric sweeteners" and 2) "sugar added to foods processed by industry".

The time trend analysis of "added sugars" consumption indicators was only performed for the households surveyed by the HBSs in metropolitan areas of Brazil, in 1986/87, 1995/96 and 2002/03.

All analytical procedures of this study were conducted with STATA, version 9.2, considering the sample design of the HBSs.

Authors declared there were no conflicts of interest, whether real, potential or apparent. In addition, the present study used secondary data collected from the IBGE, available for public online consultation. Thus, it was not necessary to submit it to any research ethics committees, according to a resolution of the Comissão Nacional de Ética em Pesquisa (CONEP - National Research Ethics Committee).

The contribution of added sugars to household food availability in Brazil reached 16.7% of total calories, higher than the maximum limit of 10% recommended by the WHO. Except for the Northern region, where added sugars corresponded to 13% of the total number of calories, the percentage of calories from added sugars was between 16.3% and 18.1% in all regions. There were no substantial differences between urban and rural households (Table 1).

The percentage of calories from added sugars was high (always above 15%) in all income groups and no linear relationship between the contribution of added sugars and household income level was found (Table 2).

The results of the present study revealed an excessive consumption of added sugars in Brazilian households, higher than 60% of the maximum limit of consumption recommended by the WHO. This situation was observed in all Brazilian regions, in both urban and rural e areas and in all income groups. In metropolitan areas, the contribution of added sugars to the total number of calories of household food availability in Brazil remained practically stable between 1987/88 and 2002/03, although there was a substantial increase in the proportion of sugar calories from processed foods. 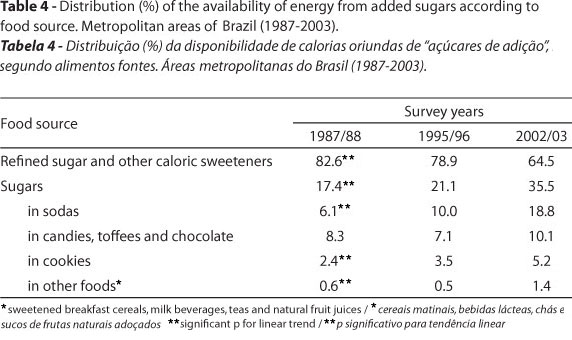 Considering exclusively the period analyzed in this study, between 1987 and 2003, data from Food Balance Sheets compiled by the United Nations Food and Agriculture Organization - FBS/FAO, which express the mean quantity of food available for human consumption in each country - indicate that the participation of added sugar on total calories available in developed countries varied slightly, from 16.5% to 17.1% in the United States and from 10.9% to 11 3% in the European Union countries. However, larger changer were seen in developing countries, such as Central America and the Caribbean countries and Brazil, where the intake, during the same period, changed from 15.1% to 18.1% and from 13.2% to 17.6% of total calories, respectively18.

The small variation in sugar consumption observed in developed countries could be associated with the saturation of the market, dissemination of information linking diseases to an excessive consumption of sugars and reduced variation in the price of demand in these countries19. In 2005/06, FAO data indicated that the availability of sugar in developed countries was approximately half of that observed in developing countries18.

The present study identified important changes in the contribution of the several dietary sources of added sugars to its total intake throughout time, The ratio between the contribution of table sugar and industrially added sugar suffered a massive reduction (4.7 against 1.8 times). Thus, the proportion of sugar from sodas, candies, toffees, chocolate and cookies, which represented approximately 17% of the total dietary sugar in the end of the 1980s, doubled (35%) in 2002/03.

Although the literature includes no information that permits researchers to compare changes in the contribution of sugar added to processed foods, product by product, throughout the decades, the situation found in Brazil appears to be similar to that of countries such as the United States, despite table sugar being the main source of sugar consumption. In the United States, the contribution of other types of sugar specifically used in the manufacturing of processed foods has substantially grown in 35 years, to the detriment of refined sugar20,21.

In Brazil, the greater contribution of processed foods to the increase in income level (varying between 11.6% and 42.2% between the lowest and highest quintiles of income distribution) could be an indication of changes in sources of sugar consumption, as there was a mean increase of 28.2% in the mean income of Brazilians between 2003 and 200822,23.

In fact, the substantial increase in consumption of sodas should be emphasized, as this high consumption is associated with a lower quality of diet and higher risks of development of non-communicable chronic diseases, such as type 2 diabetes24-27.

In addition, evidence suggests that calories consumed through liquids have a lower level of satiation when compared to those consumed through solid foods28,29, resulting in an imbalance in organic self-regulatory mechanisms of food consumption and, consequently, excessive weight gain.

The short period of reference (one week) to collect data on the purchases of foods made for each household in the HBSs could equally be an important limitation to this study. Aiming to minimize this effect, researchers adopted groups of homogeneous households, according to their location and socioeconomic characteristics, as unit of analysis and studied them during a period of 12 months.

The high consumption of sugar in the Brazilian population, found in all contexts studied, largely exceeds the international recommendations, thus emphasizing the need for interventions aimed at its reduction. Considering the fact that sugar from processed foods has replaced table sugar as its main source of consumption in recent decades, interventions performed with food companies that seek to promote healthy eating habits become of utmost importance.

32. Naska A, Vasdekis VGS & Trichopoulou A (2001) A preliminary assessment of the use of household budget survey data for the prediction of individual food consumption. Public Health Nutr 2001; 4(5B): 1159-65.