The new dietary pattern is characterized by high intake of energy, saturated fats and sugars and low intake of complex carbohydrates and fibers. This diet plays a role as a predisposing risk factor for chronic diseases1.

The literature reports untoward effects from added sugar consumption on health, especially when consumed in large amounts. One of the adverse effects from sugar intake is dental caries, especially when associated with other factors such as genetics, poor oral hygiene, number of meals and fluoride exposure. Some studies show that energy from sugars is related to excessive weight gain and dilution of other nutrients1-3.

The Household Budget Survey (2008/2009) showed that consumption of sugars remained at 16.4% of energy intake in the past five years. The maximum of 10% of energy intake from sugars is largely overcome in all socioeconomic levels6.

The objective of the present study was to investigate the main food sources of added sugars among adults and elderly individuals living in the city of São Paulo and the factors associated with excess of added sugar intake, as indicated in the Brazilian Food Guide recommendations.

Data for this study were obtained from a Health Survey in the city of São Paulo, southeastern Brazil. This population-based household survey was conducted from March to December 2003. The study sample consisted of 1,311 male and female adults (aged 20 to 59 years) and elderly individuals (> 60 years).

To achieve a conservative sample size, the following parameter settings were used: prevalence of 0.5, sampling error of 0.10, alpha of 0.05 and design effect (deff) of 2. The sampling process estimated 200 interviews for each age group and gender: 20 to 59 years old (adults male and female) and 60 years old or over (elderly males and females). Sample size was increased to 400 individuals per group to improve the statistical power.

Exclusion criteria were diabetes, malignant tumors and kidney disease. Adults and elderly individuals with energy intake below 500 kcal/day or above 4,000 kcal/day were also excluded, since these values are unlikely to maintain daily requirements9. The refusal rate was nearly 10% (n = 152) and the exclusion rate was 17.5% (n = 280).

Food intake was assessed using a 24-hour food recall (24HR), including weekends. Interviewers were previously trained. Foods reported in each 24HR were critically reviewed to identify any failures relating to descriptions of foods or preparations consumed. Data were analyzed using Nutrition Data System for Research (NDSR) software11, which was developed by the University of Minnesota, USA. NDSR was adjusted to include typical Brazilian food preparations based on standardized recipes.

A second 24-hour food recall was applied to a subsample of 335 individuals in 2007 to collect information about energy and nutrient intake and provide estimates of variability. In this stage, individuals answered two 24HR recalls. Individuals who developed diabetes, malignant tumors and kidney disease during the period between both data collections were excluded from the study.

After dietary data entry, between and within-individual variability was calculated following the Iowa State University (ISU)12,13 approach using the PC-Side program14. Two parameters needed for external variance adjustment were calculated: the within-person variance component and the fourth moment of intake distribution. For this procedure, a statistical model for gender and age group was performed, including the parameters estimated from the replicate dataset (specific for gender and age group). The jackknife replication method was chosen to estimate the standard error in complex samples. The best linear unbiased predictor (BLUP) of usual individual added sugars and energy intake was also used. BLUPs were outputted from PC-Side program for further analyses by using complex samples in Stata software12,13,15,16.

Sugars added to food during processing or at the time of consumption (table sugars) were considered for the analysis. Foods and preparations contributing to more than 1% of dietary added sugar were identified. The method used was described by Block et al.17.

The analysis was carried out using the survey module of Stata software, version 8.0, which allows adjustments for design effect and weighting.

Student's t-tests were performed to assess the association between added sugar intake (% of EI) and independents variables, such as demographics (gender, skin color, marital status and age), socioeconomics (schooling level and number of durable goods), lifestyle variables (smoking and physical activity) and presence or absence of hypertension and osteoporosis. Variables with significance levels lower than 0.25 in these tests were included in the multiple analysis. The significance level of 5% was set for variables to be included in the final model. Control variables that modified the estimated prevalence ratios of other study variables by more than 20% also remained in the final model.

The study complied with ethical regulations established by the Brazilian National Health Board and was approved by the Research Ethics Committee of São Paulo University and the authors have no conflicts of interests.

Socioeconomic and demographic characteristics of the sample are shown in Table 1. Most of the adults (61%) and a lower proportion of the elderly (25%) had more than eight years of schooling. The majority of the adult and elderly (> 60%) were Caucasian. The proportion of sedentary individuals was high: 79% and 90% for the adults and elderly people, respectively. The prevalence of hypertension (41%) and osteoporosis (17%) was higher among the elderly. 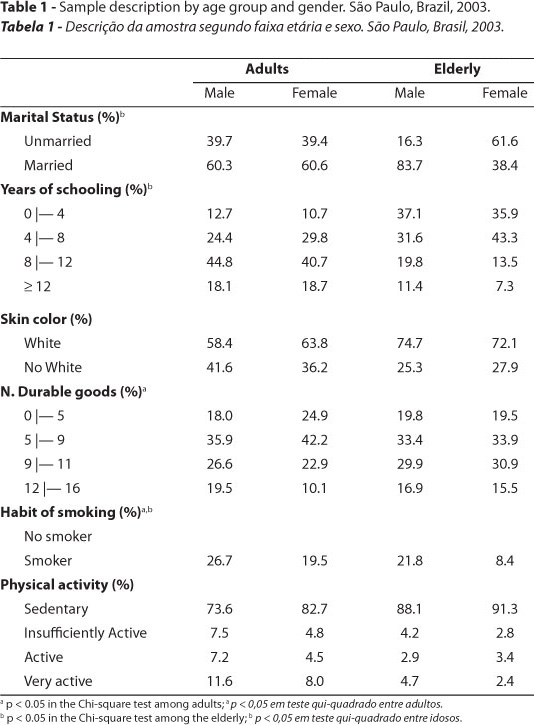 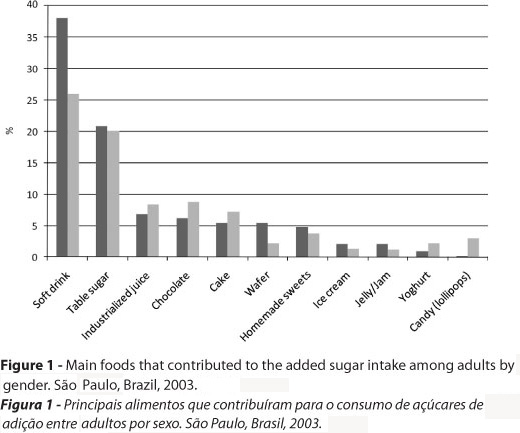 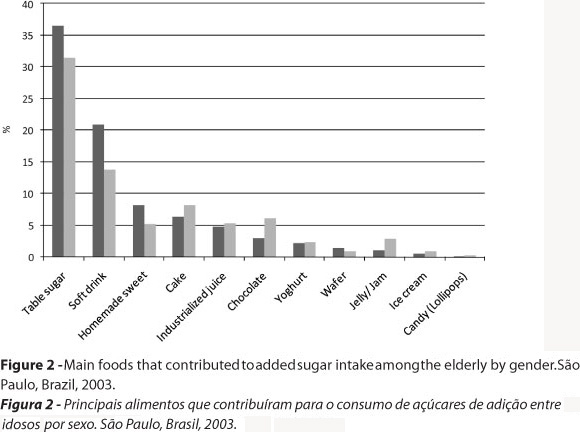 The multiple analysis was stratified according to age group. No variable was associated with consumption of added sugar among the elderly. Younger adults consumed more added sugars, as well as those adults with a higher number of durable goods (Table 3). 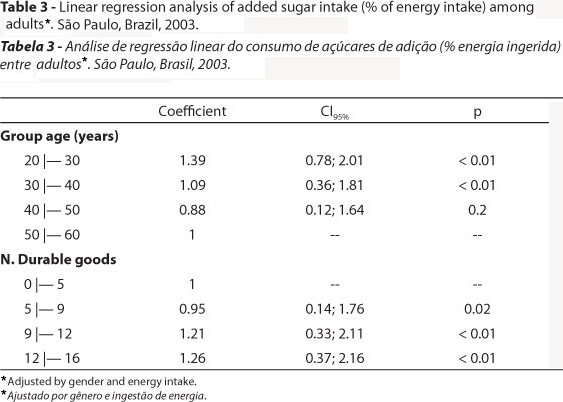 The present study describes usual added sugar intake among a representative sample from the capital of the state of São Paulo. The average contribution of added sugars to total energy intake (9.1%) was below the maximum of 10% of EI that is recommended by the Brazilian Ministry of Health5. However, this result is not very satisfactory, given that among adult women, for example, the proportion of respondents with added sugar intake above the recommended level was 41%. Excess of added sugar intake is more common among younger female adults of a higher socioeconomic level.

Most published studies on added sugar intake have focused on children. Of those investigating adults and elderly individuals, a study by Charlton et al.19 evaluating the diet of 285 African elderly individuals using a 24-hour food recall is noteworthy. These authors reported that the added sugar contribution to EI was 9.3% among men and 9.9% among women, which corroborates the findings in the present study. On the other hand, it should be noted that the African population studied was more economically deprived (14.8% of them had not had access to formal education) and 15% were institutionalized.

Among a sample of 1,097 Irish people aged 18 to 64 years old who completed a seven-day food diary, the average added sugar intake was 9.4% of EI. Comparison of the main food sources showed that the contribution of sugars (refined sugar, brown sugar and molasses) was very similar to what was seen in the present study, but the contribution of sugar from soft drinks was three times higher among the adults living in São Paulo20.

In adult and elderly Americans, the percentage of individuals with added sugar intake higher than 10% of EI ranged from 50 to 70%, depending on life stage and gender21. These values were higher than those observed in this study.

It is important to identify the main food sources of added sugars, since some food items such as cereals and yoghurt not only may be a source of sugar, but also a source of micronutrients, especially when enriched. As observed in the American population22, foods with low nutrient density such as soft drinks (30.7%) and table sugars (13.7%) were major sources of added sugar. However, table sugar intake in this study was higher than in the United States of America.

The contribution of soft drinks to added sugar intake was higher among men and nearly twice as high among adults compared to elderly individuals. In Brazil, soft drink consumption (in grams) was also higher among men and twice as high among adults compared to the elderly18. As in the Brazilian survey18, women have more diversified added sugar intake such as chocolate, cakes and industrialized juices.

Studies about the association between high levels of consumption of sugar-sweetened beverages, especially soft drinks, and obesity are increasing. The hypothesis is that the sugar calories in liquids have little effect on satiety and therefore easily lead to over-consumption23.

Added sugar intake was lower among individuals above the age of 40 years old. Morimoto et al.24 investigated the diet quality of 1,840 people living in the metropolitan area of São Paulo and concluded that the elderly had better dietary quality, because of higher intake of fruits, vegetables and dairy products and lower intake of foods rich in fats. In a few decades, it is assumed that the elderly will not have this pattern of food intake due to the current consumption habits of adults.

High socioeconomic level, identified based on the number of durable goods of adults, was associated with excess of added sugar intake. In the Brazilian survey18, intake of foods high in added sugars such as soft drinks, industrialized juices, chocolates and other sweets was higher among people with higher schooling level.

One limitation of the present study was using only one 24-hour recall. To identify usual intake, the dietary data from at least one subsample of the study population needs to be replicated, in order to correct the energy and nutrient intake for within and between-individual variability13. There is no consensus about the amount of individuals required in the subsample so 25% of the original sample was chosen.

In conclusion, consumption of added sugars was more than the desirable amount, mainly in young female adults. The socioeconomic level was associated with added sugar intake. Public health actions that reach consumers more effectively need to be developed and maintained to reduce the intake of foods that are rich in added sugars, particularly soft drinks. Nutritional education actions are required, starting from the early school years and targeting individuals across all socioeconomic strata. Some actions could help towards developing healthy food habits in adulthood. Furthermore, the amount of added sugars should be included in food labels to help people choose healthier foods.