Television viewing and abdominal obesity in women according to smoking status: results from a large cross-sectional population-based study in Brazil

To investigate the associations between television viewing and abdominal obesity (AO) in Brazilian women, according to smoking status.

Television viewing ≥ 5 times/week may increase the prevalence of AO among women who smoke. More detailed information on media use, as hours per day, may offer better estimates.

The World Health Organization (WHO) recognizes obesity as a global epidemic1. In Brazil, the increase in prevalence of overweight and obesity in the population has been associated primarily with the nutritional transition, characterized by an increase in the consumption of refined carbohydrates and saturated and trans fats, and a reduction in the intake of complex carbohydrates, fibers, and polyunsaturated fats2.

Television viewing is a leisure activity accessible to all. According to the Pesquisa Nacional por Amostra de Domicílios (PNAD - National Household Sample Survey), the proportion of Brazilian households with television was 94.5% in 20078. In this same year, in the United States, watching television was the most frequent leisure activity, occupying approximately three hours per day9.

Smokers frequently present lower BMI when compared to non-smokers10-12, although smoking may favor abdominal obesity (AO) accumulation13-15. Smoking and AO are primary risk factors for several chronic diseases16-17 and the presence of these two conditions simultaneously leads to an increase in the risk for unfavorable outcomes18-19. The conceptual framework of the present study is based on the assumption that an increased number of smoked cigarettes is positively associated with a higher television viewing frequency, which in turn is associated with increased risk of AO20.

To our knowledge, no population-based studies have considered the habit of smoking as a modifier of the relationship between television viewing and AO. In this regard, the present study undertook as its objective to investigate the association between television viewing frequency and AO among smoking and non-smoking Brazilian women aged 18-49 years.

The data were derived from the third edition of the Demographic Health Survey (DHS), conducted in 2006-07, in Brazil. This was a population-based household survey targeting women of reproductive age, including mothers of children younger than five years of age. DHS was a nationally representative cross-sectional study with a complex sampling design. Ten sampling strata were defined, based on a combination of the five Brazilian geographical regions and urban vs. rural areas. The respondents' sampling weights were derived from the household sampling weights and took into account the possibility that there may be more than one eligible woman in each household. The weights were adjusted due to non-response within households and were calibrated based on official population estimates released by the Instituto Brasileiro de Geografia e Estatística (IBGE - Brazilian Institute of Geography and Statistics).

Data from 15,575 women living in 13,056 households were collected, including information from households that contained at least one eligible woman. For the present analysis, data from 13,262 adult women aged 18-49 years, who were not pregnant at the time of the interview and with available waist circumference (WC) measurements, were considered. Structured questionnaires were applied through in-person interviews and anthropometric measures were taken. Data collected included socioeconomic status, lifestyle and reproductive history.

AO was evaluated using WC measurements (cm) collected according to WHO recommendations. WC was measured twice at the point between the last rib and the iliac crest with an inelastic measuring tape. The mean value was used as the final estimation. Subjects were classified in two categories: WC < 80 cm (adequate); WC ≥ 80.0 cm (AO)21.

The main co-variable was smoking habit; assessed through the question "do you currently smoke?" Individuals were classified as smokers and non-smokers. The other co-variables were included in the analysis aiming to control confounding in the relationship between television viewing, smoking, and AO: age group (18-19, 20-29, 30-39, 40-49 years), ethnicity (white, black, mixed and others), parity (zero, 1, 2, ≥ 3 children), marital status (married, cohabiting, not cohabiting), family income (quartiles), and geographical region (North, Northeast, Southeast, South, Midwest).

Statistical analyses were conducted considering the complex sample design. Initially, the samples' characteristics were described according to WC (≥ 80 / < 80 cm) with proportion distributions and Chi-square tests. Next, the prevalences of AO with 95% confidence intervals were calculated according to the frequency of television viewing. Finally, crude and adjusted Prevalence Ratios (PR) with 95% confidence intervals were calculated using Poisson regression models, having AO as the dependent variable and television viewing as the main exposure. WC < 80 cm was considered the reference category. All analyses on the association between television viewing and AO were conducted separately for smokers and non-smokers, because a statistically significant interaction effect on the prevalence of AO was found between television viewing and smoking status. Analyses were performed using the STATA 9.2 software.

Women with AO were more likely to belong to older age groups, to be married and to have three or more children. Approximately 90% of women watched television ≥ 5 times/week. The overall prevalence of AO amounted to 55% (Table 1). Non-smoker women were younger and had lower parity when compared with smoking women. Comparisons between smokers and non-smokers revealed significant differences in geographical region and marital status (results not shown).

The prevalence of AO amounted to 59% among smoking women with the highest frequency of television viewing when compared to 35% for those with < 1 time/week (p-value=0.020). Among non-smoking women, there was only a slight difference in the prevalence of AO when comparing frequencies of television viewing (55.2% vs. 55.7%, p-value=0.189) (Table 2).

Thumbnail
Table 2
Prevalence and confidence intervals (95%CI) of waist circumference (WC) categories according to the television viewing frequency and smoking status - National Survey of Women's and Child Demography and Health1 (2006).

Prevalence ratios showed that AO among smokers was 1.7 (95%CI: 1.1 - 2.5) times more frequent for women with a television viewing frequency ≥ 5 times/week, when compared to smoking women with a frequency < 1 times/week. The results were adjusted for age, parity, ethnicity, and marital status. The relationship between television viewing frequency and AO was not significant among non-smoking women (PR=1.1; 95%CI: 0.9 - 1.2) (Table 3).

The results of the present investigation revealed an interaction between television viewing and smoking status in a sample of Brazilian women aged 18-49 years, the reason why the multiple adjusted Poisson regression models were stratified according to smoking status. Among smokers, television viewing five or more times per week represented an increase of 70% in the prevalence of AO, in comparison with smokers who reported watching television less than once a week. These results remained significant in the adjusted analysis, when confounding factors such as age, ethnicity, parity, and marital status were controlled. Among non-smokers, the prevalence ratio of obesity for those with a television viewing frequency of five or more times per week (1.1; 95% CI: 0.9-1.2), in comparison to those who reported watching television less than once a week, was not statically significant. It is important to note, however, that despite the lower prevalence of AO among smokers who watched television less than once a week, the prevalence of AO was high and almost identical among those with the highest television viewing frequency, independently of the smoking status.

To our knowledge, no study has considered the effect of modification of smoking on media use frequency, including the amount of time of daily television viewing and AO. The present discussion is based on a hypothesis that follows a previously established conceptual framework. The first part considers the relationship among smoking intensity, television exposure and a higher likelihood of developing AO, which might explain how smoking is capable of modifying the effect of media exposure on AO. The second part relies on studies which revealed that smokers had a lower qualitative dietary intake, fewer healthy habits, and an increased risk for central obesity22,23, when compared to non-smokers.

A recent study revealed that excessive television exposure and smoking intensity were positively related, meaning that more television exposure is associated to more smoking 20. Although the relationship between smoking status and television viewing frequency is not well understood, the results of this study are useful to document this relationship. Following this idea, smoking would modify television frequency, a life style habit, and consequently increase the risk of AO.

The positive association between television viewing and obesity is well documented in the literature24,25. Cleland et al.26 observed a greater prevalence of level-2 AO among Australian women who watched television for three hours a day, in comparison to those who watched only one hour a day. These results are in line with our study.

The second part of the potential explanation considers the associated life style habits that smokers tend to have. Smokers show a reduced consumption of fruits, vegetables, fibers, vitamins, and minerals23,27,28. Furthermore, smokers tend to consume more alcoholic beverages and coffee and practice less physical activities29. It is known that smoking and inadequate eating habits can be related to a tendency to be involved in other unhealthy behaviors30. The accumulation of these unhealthy habits is more likely to occur when the number of cigarettes smoked daily is greater31,32. Bowman et al.7 described that individuals who spend more time in front of the television have a greater energy intake and consume greater quantities of fat, protein, and carbohydrates, including added sugars.

Our results corroborate with some studies that have already described that smoking women tend to have greater central adiposity33. Troisi et al.13, confirmed the direct effect of smoking habit over the distribution of body fat, and verified that this relation was independent from other behavioral factors related to smoking, such as alcohol intake and physical activity. The evidences in regards to the biological mechanisms related to smoking and patterns of body fat distribution are still inconclusive34. Some results have indicated that abdominal fat accumulation is influenced by cortisol concentration. Smokers were shown to have higher cortisol levels compared to non-smokers35,36. Apart from that, Carney & Goldberg37 described that the smoking habit may induce an increase in lipoprotein lipase activity, deregulating the uptake and storage of triglycerides and fatty acids by the adipocytes, consequently generating an increase in fat mass. In addition, evidences indicate that nicotine may have an anti-estrogenic effect38.

One strength of this investigation is the fact of being a population-based study comprised of a representative sample of the Brazilian population of women aged 18-49 years, which is, therefore, an expressive sample size. Moreover, this study investigated an issue which is not well documented in the literature yet. However, it is also important to highlight some limitations. Ideally, the main co-variable of this study, television viewing frequency, should have been measured in terms of duration as minutes or at least hours per day, considering that approximately 90% of the sample watches television on a daily basis. A more sensitive measure of smoking, such as number of cigarettes per day, would have provided better estimates as well. These limitations could bias the results, although the potential direction of bias cannot be predicted. Other limitations include the lack of data on food consumption and physical activity, important determinants of AO.

From the perspective of public health, it is important to accumulate evidences of the negative effects of smoking and unhealthy habits, such as high television viewing frequency, on the distribution of body fat. It is important to draw the attention of international organizations to the lack of clear regulation for advertisements on television. It is known that the absence of a more explicit control exposes children, men, and women to an expressive number of unhealthy products.

Among women who smoke, watching television five or more times per week may increase the prevalence of AO in comparison with those that watched television less than once a week. Television viewing had no effect on AO prevalence among non-smokers. 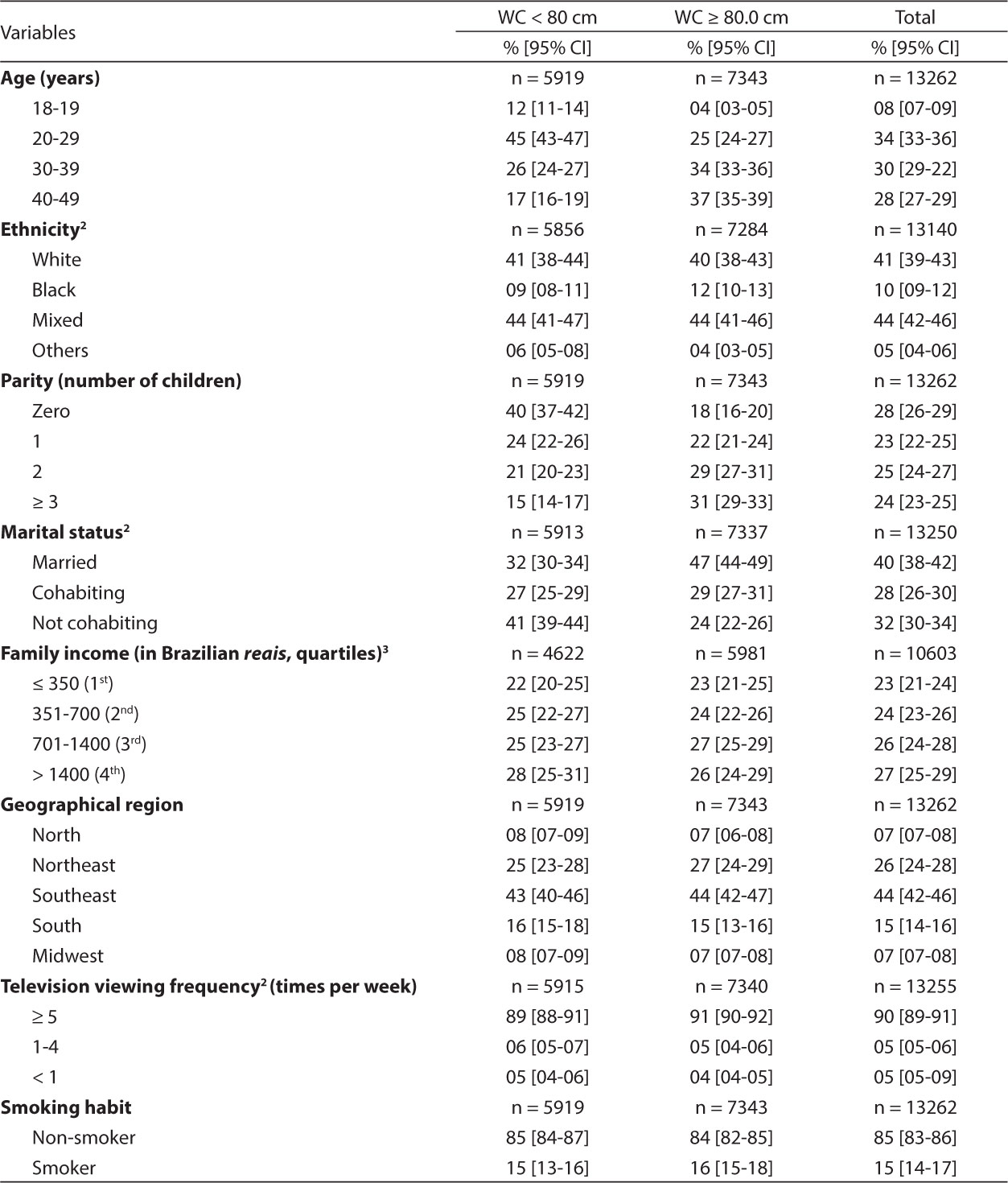 Table 2   Prevalence and confidence intervals (95%CI) of waist circumference (WC) categories according to the television viewing frequency and smoking status - National Survey of Women's and Child Demography and Health1 (2006).