This study aimed to investigate the association between mortality of breast cancer women and the social-demographic and clinical characteristics. During the mortality study of 1,086 women diagnosed with breast cancer and treated from 2000 to 2005 at a cancer hospital in the city of Vitória, Espírito Santo, medical records and tumor registration cards were controlled. The Mortality Information System and the Reclink program were used to identify 280 deaths. Patients were classified under death and non-death, and variables percentages were calculated. For variables that showed statistical significance, considering the level of 0.10, the crude and adjusted odds ratio (OR) were calculated by logistic regression model. There was a correlation between mortality and the following variables: women coming from the Unified Health System (p = 0.014; OR = 2.38), negative c-erb B-2 tumor marker (p = 0.027; OR = 2.03), advanced (III and IV) staging (p = 0.001; OR = 6.89 and OR = 17.13, respectively), presence of metastasis (p = 0.001; OR = 18.23) and recurrence (p = 0.010; OR = 3.53). Mortality associated with staging underlines the necessity of warning the population about the benefits of early diagnosis of the disease of cancer.

Cancer has proven to be an increasing occurrence and presents high mortality rates, constituting a public health problem11. World Health Organization. Global action against cancer. Geneva; 2003.. It has been estimated that, in 2008, 7.6 billion deaths were caused by the disease22. World Health Organization. World cancer report 2008. Geneva; 2008..

Data related to mortality are of utmost importance, as they allow the description of the disease's magnitude and impact. In addition, study of this data is important to identify gaps in patient access to health services and to indicate improvements in their treatment. Therefore, this study was aimed at the investigation of the association between mortality among women diagnosed with breast cancer between 2000 and 2005, who received treatment at Santa Rita de Cássia Hospital, and its sociodemographic and clinical characteristics.

A study of mortality was conducted using secondary data, since the medical records were considered from the time of diagnosis until the last visit or date of death. Initially, 1,373 case records were collected of patients diagnosed with breast cancer in the period from January 1st, 2000 to December 31st, 2005, who have had been treatment at Santa Rita de Cássia Hospital and had been included in the Hospital Cancer Registry Information System (SIS-RHC) in the same period.

In women with more than one case of primary breast tumor, only the first diagnosed case was considered, since the inclusion of two tumors from the same individual in the study would duplicate registrations of the subject in the research. Cases in which the staging was not informed were excluded, given the importance of the variable in the prognosis of the patient, for a total of 1,086 patients. The clinical staging classification was chosen, since the pathological staging showed low completeness of data.

Information about deaths were observed through the Mortality Information System database, for the period between 2000 and 2009, provided by the Department of Health of the State of Espírito Santo, which includes only deaths registered in that State. Database relation software, RecLink v. 3.1.6.3160 was used for comparing the database of patients with breast tumor and the database mentioned above, which highlighted patients who underwent treatment at the hospital and culminated in death, using the following variables as parameters for comparison between both databases: patient's name, mother's name and date of birth.

Information has been obtained by querying the Registry Files of Tumor and medical records. Collection occurred from January through December, 2010. The variables of interest in the study not covered by this database were constituted by a form, developed by the authors, which included the following items: number of metastases, recurrence rate, estrogen receptor, progesterone receptor, c-erbB-2 tumor marker and p53 tumor marker. The researchers received training in a course conducted by the hospital.

The variables analyzed comprised 16 items that were divided into two categories for better understanding and organization of the analysis. With respect to sociodemographic variables, the following were found: age at diagnosis, skin color, education level, marital status and source of referral. Regarding the clinical characteristics, the following were analyzed: tumor location, laterality, presence of more than one type of primary tumor, histological type, estrogen receptor, progesterone receptor, c-erb-B-2 tumor marker, P53 tumor marker, number of metastasis, recurrence rate and staging.

The Statistical Package for Social Sciences (SPSS) v. 18.0 was used. The final level of significance was set at 5%.

The study was duly approved by the Research Ethics Committee of the Health Sciences Department of the Universidade Federal do Espírito Santo, as set forth in Resolution No. 196 of October 16, 1996, under the Research Project Protocol No. 226/0999. Brasil. Ministério da Saúde. Portaria nº 196 de 10 de outubro de 1996 Brasilia, DF; 1996. Brasilia, DF; 1996. Disponível em: http://conselho.saude.gov.br/resolucoes/reso_96.htm. (Acessado em 20 de outubro de 2011).
Disponível em: http://conselho.saude.gov... . There is no conflict of interest to declare.

Table 1 shows the distribution of the number of deaths through the sociodemographic variables: age, race, marital status and educational level. It was observed that the average age of women at diagnosis was 52 years with a mean of 51 years (s = 13). Regarding skin color and marital status, 54% (n = 582) of patients were identified as mulatto and 44% (n = 468) were considered white, and most (55%) were married. About 437 cases of women with incomplete primary education were verified. The Greater Vitória Metropolitan Region held 67% (n = 685) of cases, concentrating 75% (n = 210) of deaths in relation to this variable. In addition, patients referred from SUS represented 67% (n = 621) of all cases and 75% (n = 180) of the deaths occurred in this category. Only the educational level (p=0.0129) and source of referral (p = 0.0020) variables mentioned above showed statistical significance.

Thumbnail
Table 1
- Distribution of deaths according to socio-demographic variables of women diagnosed with breast cancer and treated at Santa Rita de Cássia Hospital from January 2000 to December 2005.

Regarding clinical variables, it was observed that in 378 cases (49%), which comprised 53% of the total number of deaths, the primary tumor location was concentrated in the breast, with no other specifications (NOS). This item reflects the incompleteness of existing data in the medical files. Most tumors (51%) showed left laterality, which covered 49% of deaths, while right laterality happened in 49% of cases and comprised 51% of deaths. Only 3% of women were reported to have more than one type of primary tumor, and 3% of all deaths occurred in this category. Predominance (86%) of the invasive ductal carcinoma histological type was identified, which comprised 91% of deaths. No association was observed between the primary tumor location, laterality and presence of more than one type of primary tumor and the histological type (p = 0.6341, p = 0.5200, p = 0.6469 and p = 0.0652, respectively). These data are not presented in Table 2.

Thumbnail
Table 2
- Distribution of deaths according to clinical variables of women diagnosed with breast cancer and treated at Santa Rita de Cássia Hospital from January 2000 to December 2005.

Thumbnail
Graph 1
- Tumor stage at diagnosis of women diagnosed with breast cancer and treated at Santa Rita de Cássia Hospital in the period of January, 2000, through December, 2005.

It can be inferred that low educational level is an obstacle to secondary prevention of breast cancer, in relation to the practice of self-examination and to search by women of health services that perform clinical breast examinations and mammography. The issue of access to health care must be highlighted, because once low education level hinders the adoption of actions for an early diagnosis, it becomes essential to having public devices that facilitate access of this population to SUS.

19. Cooke T, Reeves J, Lanigan A, Stanton P. HER2 as a prognostic and predictive marker for breast cancer. Ann Oncol 2001; 12(Suppl 1): S23-8. - 2020. Berry DA, Cirrincione C, Henderson IC, Citron ML, Budman DR, Goldstein LJ, et al. Estrogen-receptor status and outcomes of modern chemotherapy for patients with node positive breast cancer. JAMA 2006; 295(14): 1658-67.. In this research, however, the opposite was verified, with the expression of receptors being associated with the greater number of deaths and the absence of both tumor markers related to higher mortality. It is worth noting that only 911, 909, 815 and 662 of the cases had any information on estrogen receptors, progesterone receptors and tumor markers c-erbB-2 and p53, respectively. Other authors suggest that information on the expression of receptors would not be a prognostic factor, but a predictive factor2121. Bentzon N, During M, Rasmussen BB, Mouridsen H, Kroman N. Prognostic effect of estrogen receptor status across age in primary breast cancer. Int J Cancer 2008; 122(5): 1089-94. , 2222. Goldhirsch A, Glick JH, Gelber RD, Coates AS, Thurlimann B, Senn HJ, et al. Meeting highlights: international expert consensus on the primary therapy of early breast cancer 2005. Ann Oncol 2005; 16(10): 1569-83.. It is also stated that better prognosis associated with positive estrogen receptor compared to negative receptor becomes a residual difference after five years of survival2323. Simão TA, Ribeiro FS, Amorim LM, Albano RM, Andrada-Serpa MJ, Cardoso LE, et al. TP53 mutations in breast cancer tumors of patients from Rio de Janeiro, Brazil: association with risk factors and tumor characteristics. Int J Cancer 2002; 101(1): 69-73..

As a limitation of the study, it was chosen not to assess the type of treatment and performance status of the patients. In some cases, patients were diagnosed with breast tumor and received their first treatment in other hospitals, and information regarding the time of treatment was not identified. On performance status, assessment of the welfare of patients was not performed by the group of professionals, or it was not described in the files, which did not provide sufficient information for researchers in this study to assess this data accurately.

Given the above, it becomes evident that greater risk associated with low educational level, advanced stage and metastasis point to the chance of late diagnosis in women with low education, which reinforces the need for strategies that facilitate the access of this population to health institutions, especially with regard to SUS, since an increased risk for patients who are referred from this system was also observed. There is a notable importance of further studies to identify gaps in access to the health care system for advanced stages, so that public policies can be reorganized with a focus on the early diagnosis of breast cancer.

Graph 1   - Tumor stage at diagnosis of women diagnosed with breast cancer and treated at Santa Rita de Cássia Hospital in the period of January, 2000, through December, 2005. 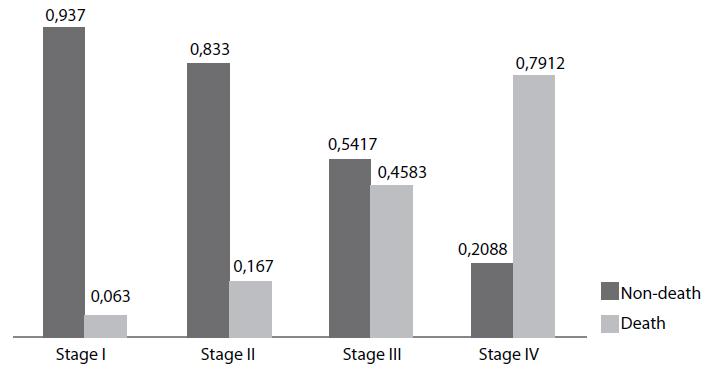 Table 1   - Distribution of deaths according to socio-demographic variables of women diagnosed with breast cancer and treated at Santa Rita de Cássia Hospital from January 2000 to December 2005.

Table 2   - Distribution of deaths according to clinical variables of women diagnosed with breast cancer and treated at Santa Rita de Cássia Hospital from January 2000 to December 2005.

Table 3   - Crude and adjusted odds ratios of variables that showed statistical significance for women diagnosed with breast cancer and treated at Santa Rita de Cássia Hospital from January 2000 to December 2005.