Few population-based cohort studies have been established in Dentistry and this is especially true for Latin America. We conducted a population-based prospective study focusing on oral health in Porto Alegre, south Brazil, and herein we describe its methodology and discuss directions for further research. The cohort was established in 2001 using a multistage probability sample of 1,465 toothed and 121 edentulous subjects. A 5-year follow-up was performed in 2006 that included 755 individuals. The main aim of this study was to determine the pattern and risk factors for periodontal disease progression and tooth loss incidence. A full-mouth protocol was used including periodontal assessments at six sites per tooth. Primary outcomes were periodontal attachment loss and tooth loss. Oral mucosal lesions, dental plaque, gingivitis, supragingival calculus, probing depths, gingival recession, and dental caries were also assessed. This is the first population-based cohort study to focus on periodontal disease in Latin America. Findings will contribute to our understanding of the epidemiology of periodontal disease and provide valuable data for the planning and implementation of preventive and therapeutic strategies.

This note describes a prospective population-based cohort study, with 5 years of follow-up, on oral health in Porto Alegre, Brazil. Studies of this kind are rare in Dentistry, especially in Periodontology, because urban samples are very difficult to follow due to their mobility and because long research periods often result in loss to follow-up. This was the first population-based study conducted with a Latin American sample, which assessed extensively the progression of periodontal disease in the medium to long term. Detailed information is available in recent publications11. Haas AN, Gaio EJ, Oppermann RV, Rösing CK, Albandar JM, Susin C. Pattern and rate of progression of periodontal attachment loss in an urban population of South Brazil: a 5-years population-based prospective study. J Clin Periodontol 2012; 39(1): 1-9. , 22. Haas AN, Wagner MC, Oppermann RV, Rösing CK, Albandar JM, Susin C. Risk factors for the progression of periodontal attachment loss: a 5-year population-based study in South Brazil. J Clin Periodontol 2014; 41(3): 215-23..

The main purpose of this cohort study was to determine the pattern and rate of progression of periodontal disease after a 5-year follow-up, as well as the risk factors associated with it. In addition, it also aimed to establish the incidence and risk factors of tooth loss.

The response rate in this urban cohort was found to be 47.6% (Figure 1). No significant differences were observed between responsive and nonresponsive subjects regarding ethnicity, educational level, and exposure to tobacco. Impact of nonresponse in findings was assessed by the inverse probability approach, considering distribution of sex, age, and educational level. With such a strategy, relative bias did not exceed 4%11. Haas AN, Gaio EJ, Oppermann RV, Rösing CK, Albandar JM, Susin C. Pattern and rate of progression of periodontal attachment loss in an urban population of South Brazil: a 5-years population-based prospective study. J Clin Periodontol 2012; 39(1): 1-9..

Thumbnail
Figure 1.
Flowchart of the sample and the response rate of the Porto Alegre Study.

Data were collected using a mobile unit; a trailer equipped with dental chair, light, and air compressor. The unit was moved from place to place to conduct interviews and clinical examinations. The same approach was used in the beginning of the study and in the follow-up examination.

A full-mouth oral examination protocol in six sites per tooth was applied to access periodontal variables. All permanent teeth, except third molars, were examined using a periodontal probe (PCP10-SE; Hu-Friedy, Chicago, USA). The following oral health indicators were determined: oral mucosal lesions; DMFT; visible dental plaque; gingival bleeding; supragingival calculus; periodontal probing depth; gingival recession; periodontal attachment loss, calculated by the sum of gingival recession and probing depth. Tooth loss was established based on DMFT scores. Consistency of interviews and clinical examinations was assessed in fieldwork at baseline and at follow-up. Kappa values for categorical variables for the interview were 0.93 at the beginning of the study and 0.97 at the follow-up.

Four examiners conducted the initial fieldwork whereas three examiners conducted clinical examinations in the follow-up. Examiners were trained and calibrated before and during fieldworks. Consistency of examiners showed an appropriate agreement for periodontal attachment loss, with weighted kappa values (±1 mm) ranging from 0.64 to 0.87.

Further research based on this cohort study include additional analysis of periodontal disease progression and associated risk factors. Secondary outcomes will also be assessed, including gingival recession and probing depth. Tooth loss along 5 years of follow-up will also be analyzed.

Thumbnail
Figure 1.
Flowchart of the sample and the response rate of the Porto Alegre Study.

Figure 1.   Flowchart of the sample and the response rate of the Porto Alegre Study. 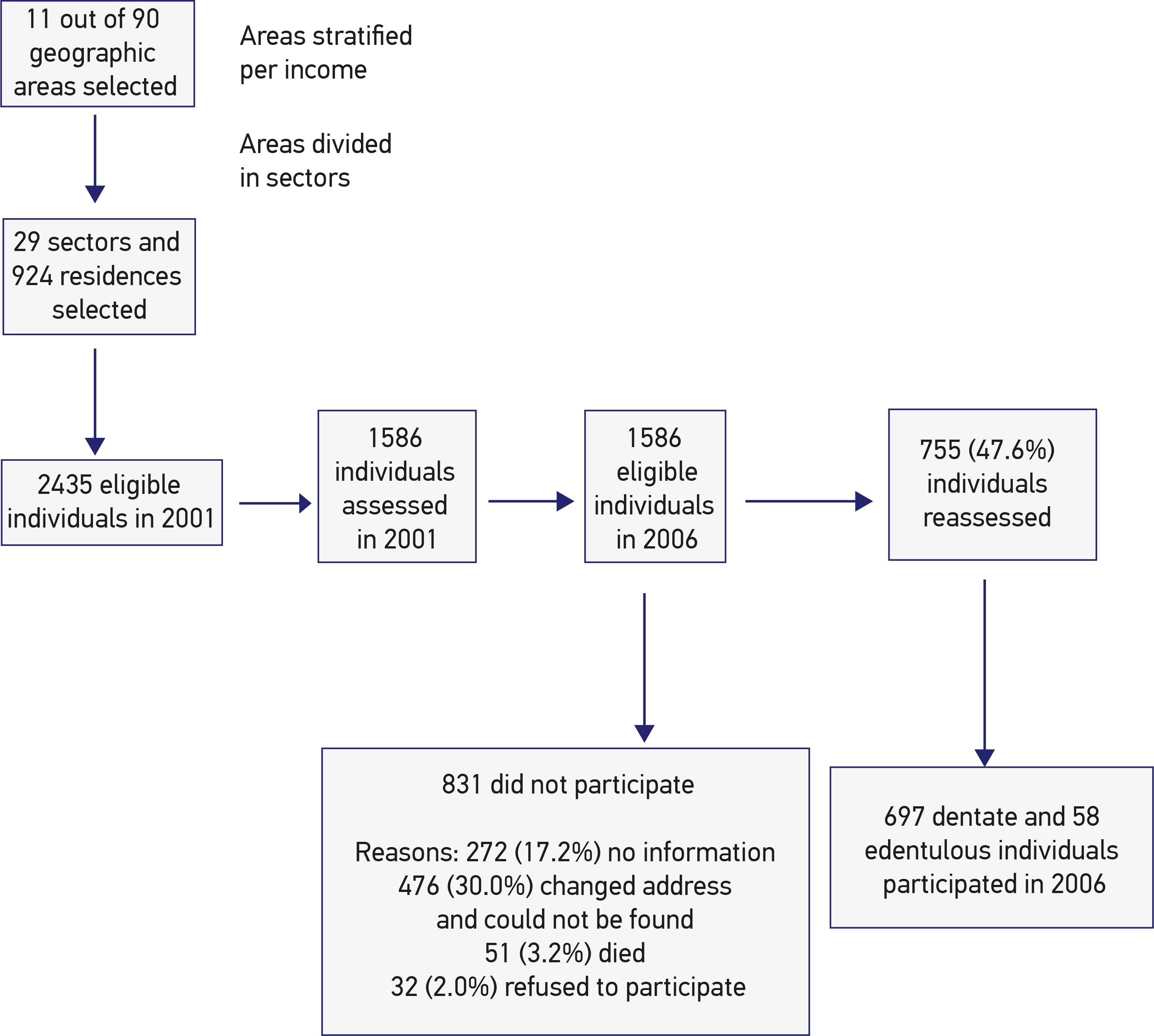