The use of the International Classification of Functioning, Disability and Health in health surveys: a reflexion on its limits and possibilities

The International Classification of Functioning, Disability and Health (ICF)11 Organização Mundial de Saúde (OMS). CIF: Classificação Internacional de Funcionalidade, Incapacidade e Saúde. São Paulo: EDUSP; 2003. is a useful tool to know the conditions of the functionality of people, associated or not to any disease, as well as to identify the environmental and personal factors which favor their activities and, consequently, their quality of life. Among the various uses of ICF is its use in populational surveys on health and disability.

The ICF proposes a conceptual model of functionality and disability in which there is multidirectional influence between its elements: functions and structures of the body, activity and participation and contextual factors, represented by environmental and personal factors. This is why the model is a biopsychosocial one.

The health surveys, such as the Household Health Survey of São Paulo (Inquérito Domiciliar de Saúde de São Paulo - ISA-Capital), in general, were designed to identify the existing relationships between social conditions and health. A unique feature of the surveys is the possibility of assessing people's health conditions, including those which are not treated in health services and, therefore, are out of the usual statistics of the system44 Campos CEA. Os inquéritos de saúde sob a perspectiva do planejamento. Cad Saúde Públ 1993; 9(2): 190-200.

In a paper that was recently published in this Journal, entitled "Identificação de conteúdo comum entre o questionário do inquérito de saúde ISA-SP e a Classificação Internacional de Funcionalidade, Incapacidade e Saúde (CIF)", the authors established relationships between the ICF and the ISA, in an attempt to identify the existing domains in the survey with ICF codes.

Despite the fact that some questions in the ISA-Capital 2003 may be referenced with ICF categories, the possibility of answers does not provide enough information for the use of all qualifiers offered by the classification. The qualifiers indicate the extension of structural and functional changes, as well as in the level of difficulty or in environmental influence. Thus, the study concluded that "the ICF cannot be used in the survey ".

One of the main questions presented in relation to the use of ICF is its broad approach. The existence of ICF categories for nearly all possible contents on human functionality ends up reporting failures which, in other ways of approach, cannot be contemplated. Therefore, it seems impossible to fit the ICF into something that already existed; on the contrary, if ICF is broader, we should insert the existing approaches in the ICF, modeling them according to this new tool.

To obtain the benefits of using ICF, it is necessary to establish relationships between the existing tools and their content88 Escorpizo R, Stucki G, Cieza A, Davis K, Stumbo T, Riddle DL. Creating an interface between the International Classification of Functioning, Disability and Health and physical therapist practice. Phys Ther 2010; 90(7): 1053-63., i.e., it is necessary to verify if the questions evaluated by the instrument (by the survey, for example) are present in the ICF domains; besides, it is necessary to evaluate the method used for measuring the results and if the answers may be measured by ICF qualifiers.

The ICF does not substitute the tools usually used in order to measure the aspects of functionality and environment, but it identifies and qualifies the situation, diagnosed by several means, using a common language that standardizes the concepts and nomenclature99 Rauch A, Cieza A, Stucki G. How to apply the International Classification of Functioning, Disability and Health (ICF) for rehabilitation management in clinical practice. Eur J Phys Rehabil Med 2008; 44(3): 329-42.. One shall consider that the interaction between the objectives of the survey and the classification does not result in an immediate use of the codes, since the ICF, in a broad and complete way, considers the study of human functionality in its many aspects. In the surveys, on the other hand, even if the formulation of the questions is appropriate, such as the case of the E Block of the ISA-Capital 2003, there is still the coverage the ICF would allow. The classification, thus, may be used as a guide for the creation of a new inquiry1010 Madans JH, Loeb ME, Altman BM. Measuring disability and monitoring the UN Convention on the Rights of Persons with Disabilities: the work of the Washington Group on Disability Statistics. BMC Public Health 2011; 11(Suppl 4): S4..

The question from ISA-Capital 2003, in general, ends up not creating subsidies for broad knowledge of the functionality situation, showing once more that the use of ICF as a guide for the formulation of populational surveys may contribute with a more complete data collection tool. There is an example in a version for data collection of the available health survey in Appendix 9 of the ICF, presented in Chart 1.

Considering the block of the questionnaire taken as an example in the study, it is noticeable that, when formulating the questions, it was not considered that the performance problems, assessed in the usual environment, are not just generated by the presence of severe deficiencies, which, in fact, would have a closer relationship to capacity problems. The capacity represents what an individual can do, considering body functions and structures. The performance also considers its interaction with the environment, which may improve or worsen the execution of a given task or action. People with the same deficiencies and with the same problems of capacity may have completely different performance-related problems, especially due to contextual factors (environmental and personal ones). Thus, one of the greatest disability determinants is the context1111 Francescutti C, Gongolo F, Simoncello A, Frattura L. Description of the person-environment interaction: methodological issues and empirical results of an Italian large-scale disability assessment study using an ICF-based protocol. BMC Public Health 2011; 11(Suppl 4): S11..

The survey approaches environmental aspects when assessing the household and its surroundings. Such conditions influence the limitation of school, leisure and work activities of people with severe disabilities (visual, hearing or physical ones). A deeper knowledge of the environment, including the technological, geographic, social and political influence, would allow the potential clarification of the limitations of the activities and the restricted social participation of the involved population. The results of the ISA-Capital, if more detailed by the ICF, would be able to show that it is possible to improve the life of people and reduce their limitations with strategies aiming at adjusting the house and its surroundings, considering that the environment is one of the main generators of human ability, and so it should be the focus of public policies aimed at human functionality1212 Vall J, Costa CM, Pereira LF, Friesen TT. Application of International Classification of Functioning, Disability and Health (ICF) in individuals with spinal cord injury. Arq Neuropsiquiatr 2011; 69(3): 513-8..

The conceptual model exposed in ICF considers the disability as a result of the interaction between health, environmental and personal conditions. As the ISA-Capital 2003 only assesses the surroundings and the household, there is no subsidy in order to safely establish a relationship between the contextual factors and the functionality state of people. Within the scope of ICF, many environmental factors, such as accessibility, public transportation, mobility, access to services and systems that facilitate human functionality technologies, are listed in the complementary component of the classification, called environmental factors1313 Brasileiro IC, Moreira TMM, Jorge MSB. Interveniência dos fatores ambientais na vida de crianças com paralisia cerebral. Acta Fisiátrica 2009; 16(3): 132-7.

Despite being possible to identify categories and ICF codes from the components approached by the ISA-Capital 2003, there is a deficiency in the approach of the disabling process by the ISA, considering that little data referring to environmental factors are collected. Even then, the use of ICF as a tool to build a new ISA version will contribute to facilitate data collection related to limitations of activities and restrictions of social participation; it will also facilitate the comparison of the functionality situation between regions. This use may contribute both with the improvement of surveys and the broadening of surveys as to the development of its own classification in future versions.

Chart 1.   Appendix 9 - Data of the International Classification of Functioning, Disability and Health suggested as minimum and ideal for the systems of health information or for health surveys. 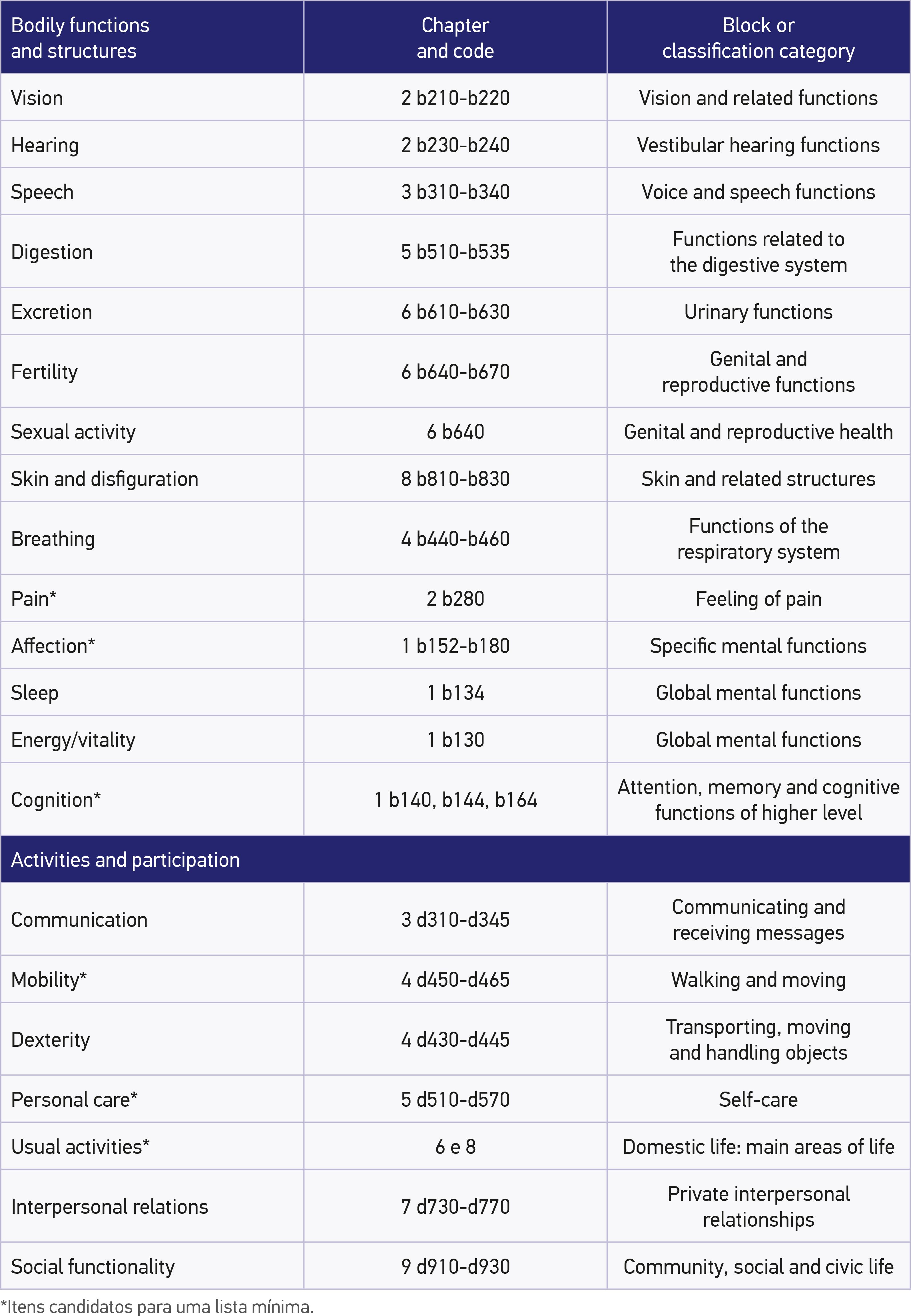 SciELO Analytics
Dimensions
The use of the International Classification of Functioning, Disability and Health in health surveys: a reflexion on its limits and possibilities
PlumX