Oral health status and functional capacity in the elderly: a longitudinal population-based study

The study of oral health conditions and functional dependency in elderly people represents an important step toward the comprehension of the intervenient factors in the health care of this population.

This methodological note described strategies and methods adopted in a longitudinal study which has been analyzing the association of oral health conditions with functional dependence among the elderly population in a city located in the countryside of Northeastern Brazil.

The assessment of the oral health conditions among the subjects is being carried out by an intraoral epidemiological examination, in which the number of decayed teeth, the periodontal condition, the use and need for dental prosthesis, and the presence of modification in soft tissues is being evaluated. Furthermore, an epidemiological condition of temporomandibular dysfunction and xerostomia are being observed. The functional capacity is being evaluated by the Katz index, and the elderly cognitive capacity is being assessed by Mini-Mental State Examination.

The first wave of this cohort, which was conducted in 2010 and 2011, evaluated 441 elderly in a city of the Northeastern Brazil. The mean decayed, missing, and filled teeth (DMFT) index was 28.16 (± 5.82), and 50.8% of the elderly were edentulous. Among the individuals from the first wave, 10.4% were dependent in at least one of the activities of daily living.

The data collection of second wave is in progress and it is expected that the extensive information collected will contribute to the planning of health actions for this population.

The study of oral health status in elderly, in addition to the investigation of its association with their functional capacity, is an important action that may contribute to understanding the factors involved in the dental care of these individuals. Thus, it is understood that the longitudinal assessment of elderly on their oral health conditions and functional dependence is extremely important, considering that monitoring these individuals is the best alternative to explain possible associations between these outcomes.

In this context, this study proposed a longitudinal analysis of the oral health status and dependence in an elderly population, as well as of the potential associations between these dimensions. Therefore, data from the cross-sectional study carried out in 2010 and 2011 in the municipality of Macaíba (RN) were used as baseline. This is therefore the first cohort of elderly selected for the study on the oral health of this population in the countryside of the Northeastern Brazil.

This cohort was composed applying the probability sampling technique by conglomerates, which randomly selected a portion representative of the elderly population (aged 60 years and above) of the municipality of Macaíba (RN). This is located in the metropolitan area of Natal - distant 21 km from the capital. According to estimates of the Brazilian Institute of Geography and Statistics (IBGE) for 2010, the total population of the municipality was 69,467 inhabitants, of whom 6,492 were aged 60 years or more, 2,978 were men, and 3,514 were women, which correspond to 9.3% of elderly residents11. Instituto Brasileiro de Geografia e Estatística (IBGE). Resultados do Censo Demográfico 2010. Disponível em: http://www.ibge.gov.br/cidadesat/link.php?uf=rn (Acessado em: 15 de maio de 2011).
http://www.ibge.gov.br/cidadesat/link.ph... . The baseline project was approved by the Ethics Committee of the Universidade Federal do Rio Grande do Norte (UFRN), under the opinion 340/2009. Therefore, data relating to the baseline represented the first wave of observation of this longitudinal study.

When testing the hypothesis that functionally dependent individuals have higher risk of oral health impairment, the calculation of sample size, considering a beta error of 20% and alpha error of 5%, showed that a sample of 194 individuals from the baseline can provide an odds ratio of 1.5.

In order to recruit the elderly of the sample, urban blocks and rural villages were previously drawn from certain census tracts. Of the 65 census tracts of the city of Macaíba, 52 were eligible. Of these, 30 were selected because they represented an optimal and operationally feasible number, which could enable appropriate dispersion of data and avoid a biased sample that did not represent the whole population.

Thumbnail
Chart 1:
Variables of the baseline study (2010/2011) of the cohort of oral health status and functional capacity in elderly. Macaíba, RN, 2015.

When considering the data on functional capacity, the baseline study found a prevalence of 10.4% of dependent individuals in at least one activity of daily living, whereas in a population base study carried out in a small city of the Northeast Brazil, this prevalence was 13.5%55. Mattos IE, Carmo CN, Santiago LM, Luz LL. Factors associated with functional incapacity in elders living in long stay institutions in Brazil: a cross-sectional study. BMC Geriatr 2014; 14: 47.. However, associations of functional capacity with oral health variables observed at the baseline were not found, which demonstrates that such outcomes may occur at different stages of the elderly's life, and therefore justifies the monitoring of people who have these characteristics.

OUTLOOK OF THE COHORT

In the second wave of the cohort initiated in 2015, the subjects of the first wave are being examined and interviewed again. However, new subjects are being included in the sample, representing individuals who were aged less than 60 years in the first wave and now are in the age range from 60 to 65 years. This new wave was approved by the Research Ethics Committee of UFRN, under the opinion 031704/2015.

The procedures being performed for data collection include the application of a questionnaire including sociodemographic questions and the evaluation of the individual functional capacity. In addition, an epidemiological examination to evaluate the oral health status of the elderly is being carried out. Therefore, DMFT is used to measure the degree of caries attack, and community periodontal index (CPI) and periodontal attachment loss index (PALI) are used to assess periodontal condition of the individual. The CPI was adopted owing to its simplicity of application and international uniformity, but its findings should be interpreted with caution, as this index has limitations owing to the partial clinical examination, which exclude signs of previous periodontal disease and any activity marker or susceptibility to the disease66. Peres MA, Peres KG, Cascaes AM, Correa MB, Demarco FF, Hallal PC, et al. Validity of partial protocols to assess the prevalence of periodontal outcomes and associated sociodemographic and behavior factors in adolescents and young adults. J Periodontol 2012; 83(3): 369-78.,77. Kingman A, Albandar JM. Methodological aspects of epidemiological studies of periodontal diseases. Periodontol 2002; 29: 11-30..

Owing to the large number of oral health variables that are being collected by this study, various associations can be made ​​using the same database. Therefore, it is expected that this cohort will enable several research initiatives, which taken together can contribute further to the understanding of the factors involved in the health care to these individuals. However, it is fundamental to investigate other elderly populations, as the elderly studied have homogeneous sociodemographic characteristics, which limits the inference of such data to populations inserted in different social contexts.

Thumbnail
Chart 1:
Variables of the baseline study (2010/2011) of the cohort of oral health status and functional capacity in elderly. Macaíba, RN, 2015. 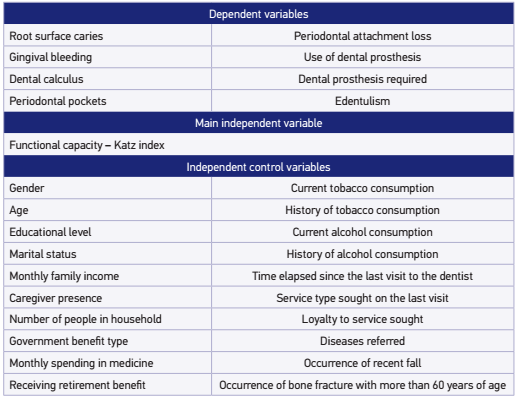