Sometimes and when a registry is not available, influenza vaccination (IV) is based on vaccination records reported by citizens, and there may be discrepancies between the two sources of information. The objectives of this study were: to know the IV coverage in pregnant women (both referred and recorded in the clinical history), to determine the concordance between both sources of information and to quantify the lost opportunities of IV due to errors in verbalization.

From June to September after the IV campaigns 2013/2014 and 2014/2015, a cross-sectional survey was carried out to a random sample of 657 pregnant women assisted in seven ASSIR (public centers for sexual and reproductive care) in Catalonia. The history of IV referred by the pregnant women and those of the vaccination record of the computerized clinical history were collected. Vaccination coverage was calculated for each source of information, it was also calculated the concordance between both (Kappa index) and the proportion of pregnant women who reported receiving the IV without having received it. This indicator was analyzed according to the different variables compared to globality through the Chi-square test. The accepted statistical significance level was p <0.05.

The referred vaccination coverage was 22.2% (95% CI: 19.0% -25.4%) and 15.4% (95% CI: 12.6% -18.2%) according to the vaccination record (p = 0.0019). Despite the good concordance between both sources (Kappa = 0.738), one out of every three pregnant women who said they were vaccinated was not according to the registry. The lower concordance and the lost opportunities of IV occurred in the upper social strata, at intermediate fertile ages and when there was previous knowledge and experience of IV.

The coverage of IV in pregnant women continues to be low. In spite of the good concordance between both sources of information, one out of three unvaccinated believe that they have been vaccinated, as result they can lose a vaccination opportunity.

The vaccination procedure is a process which includes the prior history of the patient’s vaccine background in order to decide on the administration of the vaccine in question. On occasions, and when there is no record, this decision is based on the history indicated by the pregnant woman. The objectives of this study were: know IV coverage in pregnant women both as expressed and as indicated on the clinical record, determine the consistency between these two sources of information and quantify the IV opportunities lost due to verbalization mistakes.

Between the months of June and September following the 2013/2014 and 2014/2015 IV campaigns, a cross-sectional survey was applied to pregnant women who undertook monitoring and control of the pregnancy exclusively in the ASSIR of the Barcelona Sur, Camp de Tarragona, Terres de l’Ebre and Lleida Healthcare Regions. Those with language difficulties not solved by a proxy (family or friend), those who completed the pregnancy with a bad obstetric outcome (miscarriage or stillbirth) and those who had IV contraindicated were excluded. The following assumptions were made to calculate the sample size: a confidence level of 95%, vaccine coverage of 5% and a desired precision of ±2,0%, 657 pregnant women being required for this. An expected response level of 50% was moreover taken into account, and 10% of pregnant women with exclusion criteria. The sample was obtained by random sampling proportional to the population assigned to be ASSIR starting from the pregnant women registered in these centres.

Having received IV during pregnancy (yes/no) was collected in two variables, one depending on whether expressed by the pregnant woman and the other on reviewing the vaccination record in the computerized clinical record. The socio-demographic variables were: age, high or low-income country of origin (according to the World Bank1212. The World Bank. World Bank list of economies. Washington: The World Bank; 2015. and OECD1313. oecd.org. [Internet]. Paris: Organisation for Economic Co-operation and Development; 2015. [Internet]. DAC List of ODA Recipients. Available from: http://www.oecd.org/dac/stats/daclist.htm
http://www.oecd.org/dac/stats/daclist.ht... classification), immigrant, time spent in our country and social class according to REI Model1414. Cabrera de Leon A, Rodríguez Pérez M, Domínguez Coello S, Rodríguez Díaz C, Rodríguez Álvarez C, Aguirre Jaime A, et al. Validación del modelo REI para medir la clase social en población adulta. Rev Esp Salud Pública. 2009;83(2):231-42., which includes level of education, per capita family income and crowding index. Under obstetric background, the number of miscarriages, pre-term and full-time births and the number of previous live births were collected. In relation to IV, the personal vaccination history was obtained, whether they vaccinated previous children and whether they intended to vaccinate the newborn in relation to systematic vaccinations. As regards knowledge on influenza and IV during pregnancy, they were asked about the severity of influenza during pregnancy and the safety and benefits of IV. Finally, they were asked whether the male or female midwife had recommended IV. The information was collected in telephone interviews (three attempts) by a duly trained midwife. A pilot test was undertaken with 51 pregnant women. The approval of the project was obtained from the Clinical Research Ethics Committee of the Instituto de Investigación en Atención Primaria Jordi Gol i Gurina (IDIAP).

The qualitative variables were described by means of percentages and the quantitative variables through the arithmetic mean and standard deviation (X̅±SD) and the range. Vaccine coverage (related or recorded) was defined as the number of pregnant women vaccinated divided by the total number of pregnant women, expressed in percentages and accompanied by a confidence interval of 95% (CI 95%). The consistency between the verbalization of the vaccine status and its observance on the record was measured using the Kappa index. The proportion of pregnant women who related having received IV and for whom the opposite appeared on the record was moreover calculated. This indicator was accompanied by the corresponding CI 95%. Finally, this indicator was analyzed in accordance with the different variables of the study, comparing with the whole by means of the chi-squared test. The statistical significance level accepted was p< 0,05.

Almost a third were immigrants, basically from low-income countries, two thirds had essential knowledge on influenza and IV and less than a tenth declared that they had been previously vaccinated against influenza.

In relation to potentially lost vaccination opportunities, from among the total number of pregnant women 7,5% (49) with a CI 95% (5,5%-9,5%) responded that they had received IV when, on the contrary, the record indicated that they had not received it. Table 2 presents the subgroups of pregnant women in which these lost opportunities were greater than 7,5%. Among them, the following were observed as statistically higher than this overall percentage: the subgroups in which the woman had not vaccinated previous children, did not intend to vaccinate the newborn, had been vaccinated in previous pregnancies, when the reason for prior vaccination was being a healthcare professional and when the male or female midwife had recommended IV.

Despite the good consistency between what they recall and what appears on the records, one out of three non-vaccinated pregnant women believes that she is vaccinated and may, therefore, lose the opportunity of being vaccinated. Overall, this figure would correspond to one out of every 13 pregnant women. Verbalization would inflate correct vaccine status by 44.2%, this being observed in other studies88. Suarez L, Simpson DM, Smith DR. Errors and correlates in parental recall of child immunizations: effects on vaccination coverage estimates. Pediatrics [Internet]. 1997;99(5):E3. Available from: http://pediatrics.aappublications.org/cgi/doi/10.1542/peds.99.5.e3 http://www.ncbi.nlm.nih.gov/pubmed/9113960
http://pediatrics.aappublications.org/cg... ,99. Szilagyi P, Hager J, Roghmann K, Doane C, Cove L, Rodewald LE, et al. Immunization practices of pediatricians and family physicians in the United States. Pediatrics. 1994;94(4):517-23.. In this respect, and in order to reduce lost vaccination opportunities, various scientific institutions and societies (the Task Force and the National Vaccine Advisory Committee of the CDC - Centers for Disease Control and Prevention) made a series of recommendations based on scientific evidence, including the correct recording of vaccines administered and consulting vaccine records and documents prior to vaccination1515. Centers for Disease Control and Prevention (CDC). Vaccine-preventable diseases: improving vaccination coverage in children, adolescents, and adults. A report on recommendations from the Task Force on Community Preventive Services. MMWR Recomm Rep. 1999;48(RR-8):1-15.,1616. Bernier RH, Dietz VJ, Lyons AE, McKnight HL, Mullen JH, O'Mara DJ, et al. Standards for pediatric immunization practices. JAMA. 1993;269(14):1817-22..

The loss of vaccination opportunities and the lower consistency occurred essentially in the higher social classes and at intermediate ages, which could be related to the higher insertion and involvement of these pregnant women in the labour market, leaving less time for these women for their own care. In any case, the survey on healthcare knowledge, competencies and skills indicates women from 35 to 49 years old as the group most interested in looking after their own health1717. Acedo F. Las mujeres de mediana edad las más interesadas por el autocuidado de la salud. Diario Siglo XXI [Internet]. Valencia; 2012;1. Available from: http://www.diariosigloxxi.com/texto-diario/mostrar/79694/mujeres-mediana-edad-interesadas-autocuidado-salud
http://www.diariosigloxxi.com/texto-diar... . In view of all this, it would be convenient to undertake in-depth research on the social and economic aspects of this group.

Previous IV knowledge and experiences could give rise to a negative attitude in relation to this vaccine. Thus, the fact of being a healthcare professional, previous vaccination and an a priori decision not to vaccinate the newborn or not having vaccinated previous children, also give rise to lost vaccination opportunities due to a lack of interest of the pregnant woman in this vaccine. In this respect, some authors insist on analyzing these beliefs and on designing strategies to change the attitude of healthcare professionals1818. Montserrat-Capdevila J, Godoy P, Marsal JR, Barbé-Illa F. Factores asociados a recibir la vacunación antigripal en profesionales de atención primaria. Gac Sanit. 2015;29(5):383-6.,1919. Eiser JR. Psicología social: actitudes, cognición y conducta social. 1989. 32 p.. Furthermore, there were also more lost opportunities with those pregnant women whose male or female midwife did not recommend IV and when there was a lack of information on the safety of the vaccine, which could highlight the abilities of these professionals to collect information on the vaccination history and to give information on IV, as demonstrated in other studies66. Vilca Yengle LM, Campins Martí M, Cabero Roura L, Rodrigo Pendás JÁ, Martínez Gómez X, Hermosilla Pérez E, et al. Vacunación antigripal en gestantes. Cobertura vacunal y conocimientos y prácticas de los obstetras. Med Clin. 2010;134(4):146-51..

The study was performed in two IV seasons, between which there were no changes in IV strategies or in the other vaccines indicated during pregnancy. The fact that the study was performed in the ASSIR could represent a bias of underrepresentation of pregnant women seen in other public centres such as hospitals and those who attend private centres. Carrying out the interview by telephone, although by an educated and trained midwife, may not achieve the same level of attention in relation to that which would have been obtained in a face-to-face manner in the surgery, which could give rise to a presumably random error. Moreover, having undertaken the interviews a few months after the vaccination period would make it easier to recall whether they had been vaccinated and which vaccines they had received. Also, it is not possible to guarantee the validity of the vaccine records, especially when a vaccine appears as not administered, which could overestimate the findings of this study.

In conclusion, systematizing a review of vaccine records within the vaccine procedure in pregnant women would be a non-negligible way of contributing to the improvement of low vaccine coverage in this group.

The male/female midwives of the ASSIR of the Barcelona Sur, Camp de Tarragona, Lleida, Terres de l’Ebre Healthcare Regions and the pregnant women seen by them.

Table 1   Description of the pregnant women participating in the study 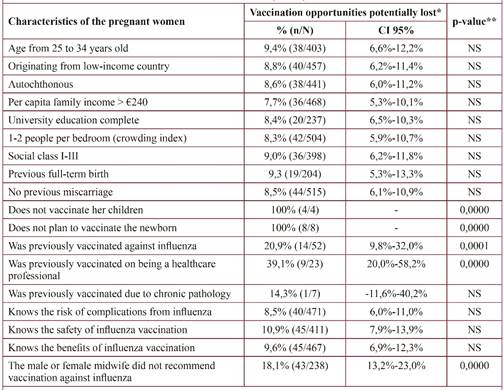