Syphilis in pregnancy and congenital syphilis and their relationship with Family Health Strategy coverage, Goiás, Brazil, 2007-2014: an ecological study**Article based on the Master’s Degree dissertation of the lead author, Patrícia Silva Nunes, entitled ‘Congenital syphilis in the State of Goiás, 2007-2014’, defended at the Federal University of Goiás Public Health Postgraduate Program on December 11th 2015.

to analyze the incidence of syphilis in pregnant women (SPW) and congenital syphilis (CS) and the correlation of these indicators with Family Health Strategy (FHS) coverage in Goiás, Brazil, from 2007 to 2014.

this was an ecological study using Notifiable Diseases Information System (SINAN) data and data from the Health Ministry’s Department of Primary Care; Spearman's correlation was used to evaluate the relationship between FHS coverage and syphilis incidence.

the concomitant increase in SPW and CS incidence suggests failures in the prevention of vertical transmission of syphilis, especially in regions with lower FHS coverage.

Antenatal care is an important component of the care offered by family health teams and is a key moment for adequate management of infections that can be transmitted from mother to child, such as syphilis, a disease capable of raising the risk of fetal loss in up to 21% of infected pregnant women, when compared to their uninfected counterparts. 77. Gomez GB, Kamb ML, Newman LM, Mark J, Broutet N, Hawkes SJ. Untreated maternal syphilis and adverse outcomes of pregnancy: a systematic review and meta-analysis. Bull World Health Organ. 2013 Mar;91(3):217-26. doi: 10.2471/BLT.12.107623.
https://doi.org/10.2471/BLT.12.107623...

The objective of this study was to analyze the incidence of syphilis in pregnant women (SPW) and congenital syphilis (CS) and the correlation of these indicators with FHS coverage in the state of Goiás between 2007 and 2014.

We conducted an ecological study of recorded cases of CS and SPW in the state of Goiás and also of FHS coverage in municipalities in Goiás reporting cases for the period 2007 to 2014.

In 2015 the population of the state of Goiás was estimated to be 6,778,772 inhabitants distributed over 246 municipalities which, in turn, are grouped into five Health Macroregions: Northeast, West Central, North Central, Southeast and Southwest. 99. Instituto Brasileiro de Geografia e Estatística. Estados@ Goiás 2015 [Internet]. 2018 [citado 2018 out 5]. Disponível em: Disponível em: http://www.ibge.gov.br/estadosat/perfil.php?lang=&sigla=go
http://www.ibge.gov.br/estadosat/perfil....

The study’s target population was comprised of all CS and SPW cases reported in Goiás, by municipality and health macroregion during the study period. FHS was taken to be a proxy for access to health services including antenatal care.

The data relating to percentage FHS coverage per municipality were imported from DAB’s website, taking the month of June of each year.

In order to analyze the correlation between FHS coverage and syphilis incidence (SPW and CS), we considered those municipalities that reported at least one case between 2007 and 2014, excluding places reporting no cases and places with no information on cases. Scatter graphs were produced for the syphilis incidence coefficients (SPW and CS) in relation to percentage FHS coverage. Spearman’s correlation (r=rho) was applied as a statistical test, with the purpose of verifying the relationship between FHS coverage and CS and SPW incidence for each year being studied.

Fisher’s exact test (mid-P method) 1010. Martin DO, Austin H. Exact estimates for a rate ratio. Epidemiology. 1996 Jan;7(1):29-33. was used to compare differences in FHS coverage proportions between the SPW and CS incidence coefficients for the period 2007-2014. The cumulative incidence ratios were also calculated, i.e. the rate ratios (RR) for the indicators between the first year and the last year of the time series.

Data analysis was performed using Microsoft® Excel 2010 and IBM® SPSS Statistics 22.0. P-values of <0.05 were taken to be statistically significant for all the statistical tests.

The design of our study does not enable a causal relationship between FHS coverage in the municipalities and the number of SPW and CS cases to be proven. FHS coverage was used as an indirect measurement of access to antenatal care; however, this is not the only indicator of access to this service. 1111. Ministério da Saúde (BR). Secretaria de Atenção à Saúde. Departamento de Ações Programáticas Estratégicas. Gestação de alto risco: manual técnico [Internet]. 5.ed. Brasília: Ministério da Saúde; 2012 [citado 2018 out 5]. 302 p. Disponível em: Disponível em: http://bvsms.saude.gov.br/bvs/publicacoes/manual_tecnico_gestacao_alto_risco.pdf
http://bvsms.saude.gov.br/bvs/publicacoe... ,1212. Ministério da Saúde (BR). Programa nacional de melhoria do acesso e da qualidade da atenção básica (PMAQ): ficha de qualificação de indicadores [Internet]. Brasília: Ministério da Saúde ; 2012 [citado 2018 out 5]. 80p. Disponível em: Disponível em: http://189.28.128.100/dab/docs/sistemas/Pmaq/manual_instrutivo_pmaq_site_anexo.pdf
http://189.28.128.100/dab/docs/sistemas/... The use of secondary data coming from passive reporting of syphilis cases, may only account for part of existing cases. Nevertheless, we believe that possible underreporting would not substantially change the direction taken by the results our study found, given that the coefficients increased over the period. There is also the possibility of the number of cases being overestimated as a result of difficulties in investigating these cases in order to confirm CS diagnosis, given that the same case reporting criteria were maintained throughout the period analyzed.

Our study investigated the relationship between syphilis incidence (CS and SPW) and FHS coverage, regardless of the length of time in service and the experience of the FHS teams. Moreover, no adjustment was made regarding the sociodemographic profile of the municipalities reporting cases.

There was no significant decrease in CS in municipalities with higher FHS coverage (≥75%) in the period studied. This shows the need to investigate other factors interfering in the response to this congenital infection, such as sociodemographic conditions and health care conditions in these municipalities. A time series study conducted in Brazil between 2003 and 2008 found more intense CS reduction in municipalities with greater FHS coverage strata; however, the negative correlation between CS incidence and FHS coverage was not maintained following adjustment for potential confounding variables, thus suggesting that the reduction in CS might not be attributable to FHS but rather to the municipalities’ antenatal coverage and their demographic characteristics. 2424. Araújo CL, Shimizu HE, Sousa AIA, Hamann EM. Incidência da sífilis congênita no Brasil e sua relação com a estratégia saúde da família. Rev Saúde Pública. 2012 jun;46(3):479-86. doi: 10.1590/S0034-8910201200300010.
https://doi.org/10.1590/S0034-8910201200...

Another important aspect to raise, which is a challenge to preventing vertical transmission of syphilis, is the adequate training of health professionals, especially those working in antenatal services. 2525. Kiarie J, Mishra CK, Temmerman M, Newman L. Accelerating the dual elimination of mother-to-child transmission of syphilis and HIV: why now? Int J Gynaecol Obstet. 2015 Jun;130(Suppl 1):S1-3. doi: 10.1016/j.ijgo.2015.05.002.
https://doi.org/10.1016/j.ijgo.2015.05.0... A study conducted in Brazil on hospitalizations owing to primary care sensitive conditions found that FHS has contributed to progress in addressing certain health conditions; however, the same investigation highlighted the need for health team training and better targeting of actions. 2626. Ceccon RF, Meneghel SN, Viecili PR. Hospitalization due to conditions sensitive to primary care and expansion of the Family Health Program in Brazil: an ecological study. Rev Bras Epidemiol. 2014 Dec;17(4):968-77.

The difficulties encountered in combating syphilis are countless. With the aim of providing better elucidation as to the main obstacles in controlling vertical transmission of syphilis within the context of the different Brazilian realities, the Ministry of Health encourages the creation of committees to investigate CS cases. Furthermore, in late 2014 the Ministry released its ‘Protocol for the Investigation of Vertical Transmission’ with regard to STI, HIV/AIDS and viral hepatitis surveillance, prevention and control, including cases of early CS. The publication is a guidance tool for investigating individual, care service and management vulnerabilities which have direct impact on increased cases. 2828. Ministério da Saúde (BR). Protocolo de infestigação de transmissão vertical [Internet]. Brasília: Ministério da Saúde ; 2014 [citado 2018 out 5]. 83 p. Disponível em: Disponível em: http://www.aids.gov.br/pt-br/pub/2014/protocolo-de-investigacao-de-transmissao-vertical
http://www.aids.gov.br/pt-br/pub/2014/pr...

FHS is a privileged space for territorial intervention. However, there needs to be more in-depth discussion on the issue of SPW and CS with regard to intersectoral public policies, so as to integrate FHS with other health care network points, which in turn need to be integrated with other social sectors. 66. Arantes LJ, Shimizu HE, Merchán-Hamann E. Contribuições e desafios da estratégia saúde da família na atenção primária à saúde no Brasil: revisão da literatura. Ciênc Saúde Coletiva. 2016 maio;21(5):1499-510. doi: 10.1590/1413-81232015215.19602015.
https://doi.org/10.1590/1413-81232015215... Furthermore, the creation of spaces of social participation should be encouraged in order to jointly build actions capable of having an effective impact on the reality of this infection.

SPW and CS incidence increased over the period, and had positive correlation with increased FHS coverage in the majority of the years studied. The spread of the epidemic and loss of opportunities in preventing vertical transmission of syphilis can be seen, including in municipalities with high Family Health Strategy coverage. This indicates the need to strengthen Primary Care, in particular with regard to those aspects related to quality of antenatal care and quality of the investigation of the factors involved in vertical transmission of syphilis with the aim of achieving more assertive interventions.

Nunes PS and Turchi MD took part in conceiving the study design, data analysis and interpretation and writing the manuscript. Zara ALSA, Rocha DFNC, Marinho TA and Mandacarú PMP took part in data analysis and interpretation as well as critical review of the intellectual content of the manuscript. All the authors have approved the version to be published and declare themselves to be responsible for all aspects of the work, including the guarantee of its accuracy and integrity. 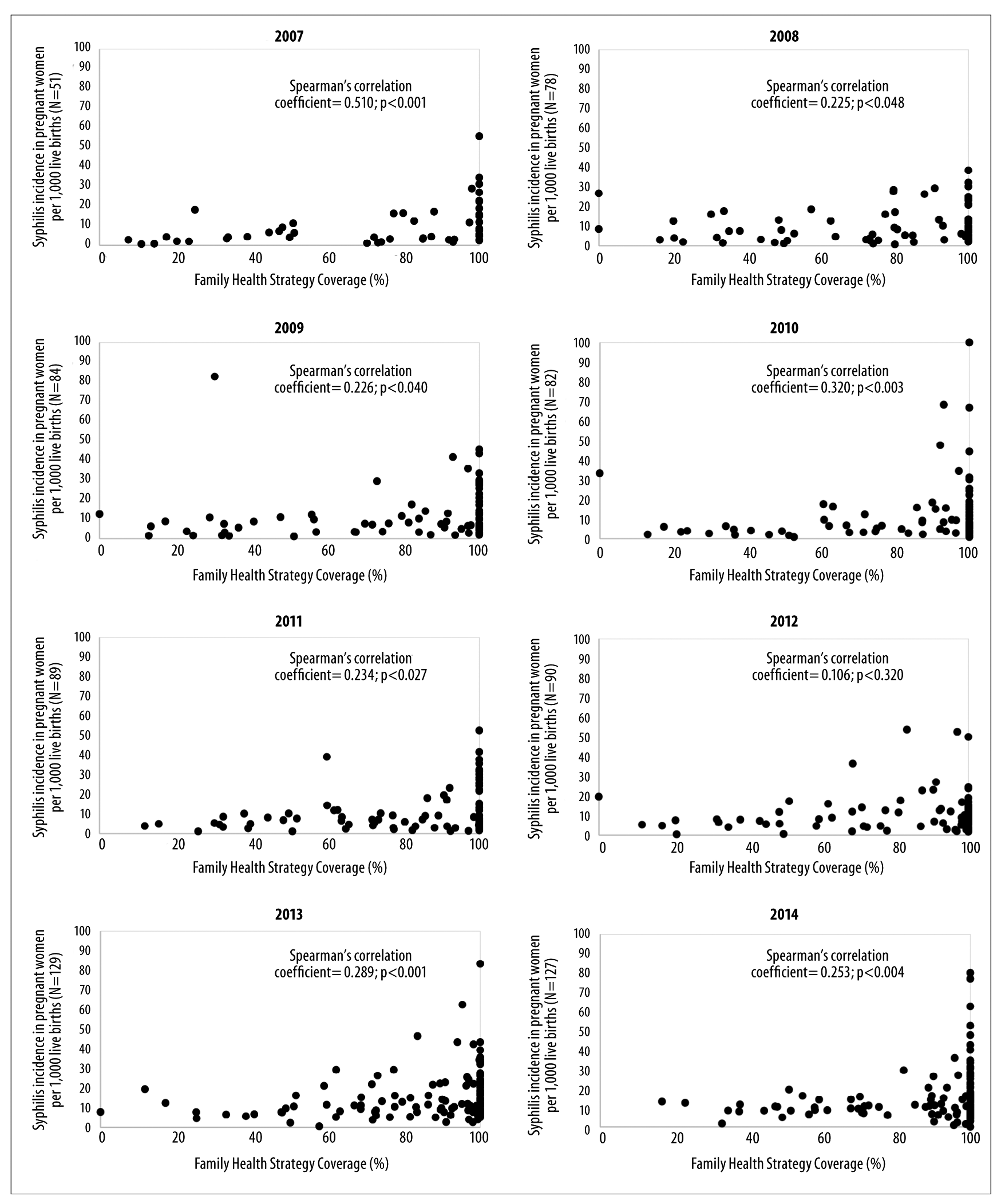 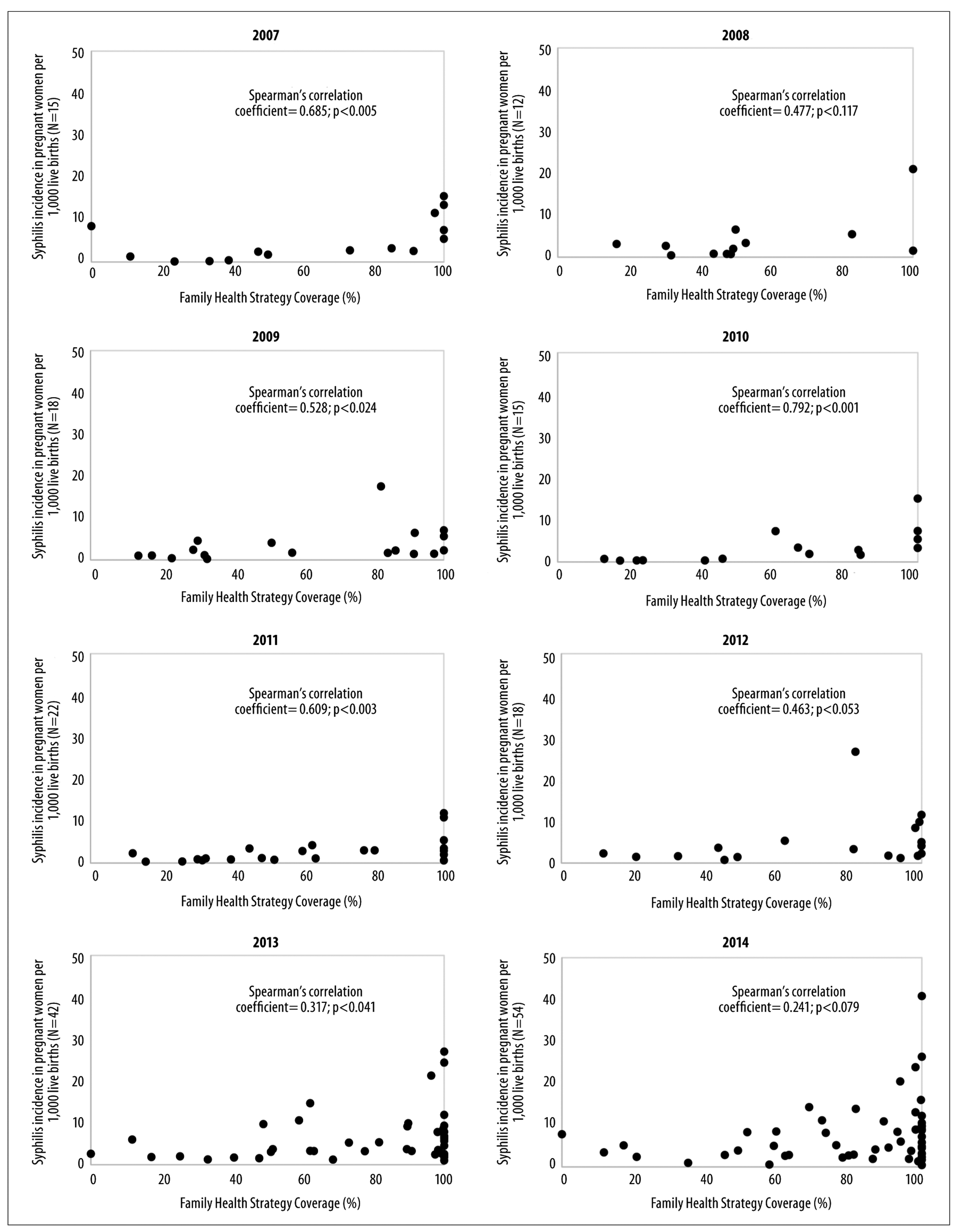