Antibiotic resistance is one of the most important threats to global health, food security and national development. Currently, different alternatives are being developed to combat microbial strains that present multi-resistance, and one of them is the search for new secondary metabolites with antimicrobial bioactivity.

Among the microorganisms that produce bioactive compounds, Streptomyces are the most important genus of bacteria and produces compounds such as polyketide, peptides and polyketide-peptide hybrids, all of which have been characterized with different biological activities as antibacterial, antifungal and anticancer 11. Sottorff I, Wiese J, Lipfert M, Preußke N, Sönnichsen FD, Imhoff JF. Different secondary metabolite profiles of phylogenetically almost identical Streptomyces griseus strains originating from geographically remote locations. Microorganisms. 2019;7(6). pii: E166..

This study aims to determine the antimicrobial activity of cultures and metabolic extracts of Streptomyces sp. 6E3 against different pathogenic enterobacteria, such as Staphylococcus aureus and Candida sp.

Motivation for the study: The increasing microbial resistance due to the indiscriminate use of antibiotics, requires the development of new alternatives, such as the use of microorganisms isolated from poorly studied environments.

Main findings: It has been possible to identify a strain of Streptomyces 6E3 isolated from minerals with the capacity to inhibit methicillin-re sistant Staphylococcus aureus.

Implications: Obtaining microorganisms that could become an alternative treatment would help solve the public health problem we are facing.

The production phase was determined by means of the antimicrobial activity test, in which the double-layer method of Singh et al. was used. 88. Singh LS, Baruah I, Bora T. Actinomycetes of Loktak habitat: isolation and screening for antimicrobial activities. Biotechnology. 2006;5(2):217-21.) Cultures of Streptomyces sp. 6E3 sown in the center of the XGAL agar from 3, 5, 7 and 10 day growth plates were compared to strains of Escherichia coli ATCC 25922 and Staphylococcus aureus ATCC 33862. During these growth stages, colony growth was observed as well, both microscopically and macroscopically.

Ethyl acetate solvent was used for the preparation of the extracts. Thirty XGAL plates were sown and, with the aid of a mi cropipette, 3 ml of the solvent was added to the culture. The cells moistened by the solvent and the supernatant were swept and collected in Falcon tubes. The content from the mentioned tubes was homogenized with ultrasonic agitation for 15 minutes at room temperature. The tubes with the lysed cells were centrifuged for 10 minutes at 5000 rpm. The supernatant was then removed and the ethyl acetate solvent, evaporated, first in a rotavapor with a pressure of less than 250 millibars and in a water bath at 40 °C, and then with a nitrogen gas stream, until 147 mg of extract was obtained, which was kept at -20 °C until use.

A reverse-phase thin-layer chromatography (TLC Silicagel 60 RP18 from Merck®) with a mobile phase of acetonitrile (water in a ratio of 2:1) was performed on this extract to observe the number of compounds under a UV lamp at 254 nm and 366 nm. In addition, an antibiogram was performed by the diffusion method with discs to observe whether the desired antimicrobial effect was still present.

We used a glass column packed with silica gel RP60 from Merck®, pre-washed with methanol for the extract fractionation. 50 mg of the extract were dissolved in 400 uL ethyl acetate. The mobile phases were 20 mL of acetonitrile and water in ratios of 1:1 (v/v), 1:2, 6:4, 7:3, 8:2, 9:1 and 10:0. The fractions were collected in test tubes up to a volume of 4 mL and were subjected to reverse-phase thin-layer chromatography using an acetonitrile mobile phase: water, in a ratio of 3:1.

The chromatographies were observed under UV light of 366 nm. The fractions that presented similar chromatographic profiles were collected and the solvent was removed by means of the rotary evaporator. Finally, six fractions named A, B, C, D, E and F were obtained. A thin layer chromatography and an antibiogram, according to the disc diffusion method, were con ducted again on the six fractions, to observe which of the fractions had the antimicrobial effect.

The method of Wiegan et al.1010. Wiegand I, Hilpert K, Hancock RE. Agar and broth dilution methods to determine the minimal inhibitory concentration (MIC) of antimicrobial substances. Nat Protoc. 2008;3(2):163-75.) was used to determine the minimum inhibitory concentration (MIC). As positive control, vanco mycin was used for MRSA strains, and penicillin for Staphylococcus aureus, which ranged from 120 to 0.06 ug/mL. The negative control was a Mueller Hinton broth inoculated with a standard strain; the blank one was a sterile broth. The six fractions were dissolved in 400 uL dimethyl sulfoxide (DMSO) to prepare stock solutions, and make the respective dilutions. The amounts of the fractions used to make the stock solutions were as follows: 0.5 mg of the B fraction; 0.5 mg of the C fraction; 0.5 mg of the D fraction; 2 mg of the E fraction; and 1 mg of the F fraction.

The microplate was incubated at 37 °C for 24 hours. The results were obtained by two methods: a) triphenyltetrazolium chloride was used, in which the color change of the microwell contents to red indicated microbial growth, and b) the micro plate was placed in an ELISA reader, in which only turbidity was measured. The MIC was found by means of absorbance versus concentration curves, according to the methodology of Devienne et al. 1111. Devienne KF, Raddi MSG. Screening for antimicrobial activity of natural products using a microplate photometer. Braz J Microbiol. 2002;33(2):166-8.)

Descriptive statistical analysis was performed to analyze the results of antimicrobial activity tests by the double layer and disc diffusion method.

Antimicrobial activity was observed in the 7- and 10-day cultures, which was related to the macroscopic observation of a red dish substance in the colony, while microscopically spores were observed, indicating the end of its mycelial phase (Figure 1).

Thumbnail
Figure 1
A) Determination of the production phase. Macroscopic observation of the Streptomyces sp. 6E3 colony at seven days. B) Antimicrobial activity of the strain against Staphylococcus aureus at seven days.

An extract of 141.9 mg was obtained, from which six fractions named A, B, C, D, E and F were obtained and six chromato graphic spots numbered 1, 2, 3, 4, 5 and 6, respectively, could be identified. The thin layer chromatography performed on the fractions corroborated the presence of the same chromatographic spots present in the raw extract (Figure 2).

The antibacterial activity of the fractions was determined and inhibition halos of 8 to 15 mm were observed against Staphylo coccus aureus strains. The D fraction showed the best activity, as well as a lower MIC unlike the rest of the fractions (Table 1 and Figure 3). The A fraction did not show any activity with the disk diffusion method, which is why the MIC was not determined.

Bioactive compounds are mostly produced as secondary metabolites and some of them may also be pigments 1212. Rao MPN, Xiao M, Li W-J. Fungal and Bacterial Pigments: Secondary Metabolites with Wide Applications. Front Microbiol. 2017;8(1113).. Many Strep tomyces produce pigmented compounds with antimicrobial activity, such as the antibiotics actinorhodin (13) and roseoflavin 1414. Otani S, Takatsu M, Nakano M, Kasai S, Miura R. Roseoflavin, a new antimicrobial pigment from Streptomyces. J Antibiot (Tokyo). 1974;27(1):88-9.). The reddish coloration observed in the seven-day cultures may be related to the production of some antimicrobial com pound produced by this bacterium.

The Streptomyces strain used in this investigation is of mineral origin, specifically from a concentrate of arsenopyrite 55. Hurtado J, Pacheco SL, Sheen P, Ugarte D. Actinobacteria isolated from Mineral Ores in Peru. J Microbiol Biotechnol Food Sci. 2019;2019:366-70.. It is evident that mining environments are very important for the search of strains with potential bioactivity, the same has been demonstrated in a study, in which Pleurostomophora sp. isolated from minerals produced anti-inflammatory compounds (1515. Stierle AA, Stierle DB, Girtsman T, Mou T, Antczak C, Djaballah H. Azaphilones from an Acid Mine Extremophile Strain of a Pleurostomophora sp. J Nat Prod. 2015;78(12):2917-23..

The extraction process was carried out by the surface sweeping of the culture plate, and it is possible that method facilitated recovery of the metabolites released by the bacteria into the environment or the ones contained within the cells.

In the case of this strain, at least six chromatographic spots have been visualized by means of thin

layer chromatography (Figure 2). Many of the species of the genus Streptomyces produce more than one metabolite depending on the product ob tained, which is related to the solvent used and the carrying capacity according to its polarity and that of the compounds 1818. Ilic S, Konstantinovic S, Todorovic Z, Lazic M, Veljkovic V, Jokovic N, et al. Characterization and antimicrobial activity of the bioactive metabolites in streptomycete isolates. Mikrobiologiia. 2007;76(4):480-7.,1919. Arasu MV, Duraipandiyan V, Agastian P, Ignacimuthu S. In vitro antimicrobial activity of Streptomyces spp. ERI-3 isolated from Western Ghats rock soil (India). J Mycol Med. 2009;19(1):22-8.. From the metabolites found, only some would have antimicrobial activity. Streptomyces coelicolor, in addition to producing

The number of test repetitions is considered as one of the limitations of the study. It could not be determined whether the antimi crobial activity of the extract was in a compound within the cell or was excreted. Since several secondary metabolites may be present in each fraction of the extract, it is not clear whether the inhibition was due to the combined action of these metabolites or just by one of them.

All authors have none to declare.

Figure 1   A) Determination of the production phase. Macroscopic observation of the Streptomyces sp. 6E3 colony at seven days. B) Antimicrobial activity of the strain against Staphylococcus aureus at seven days. 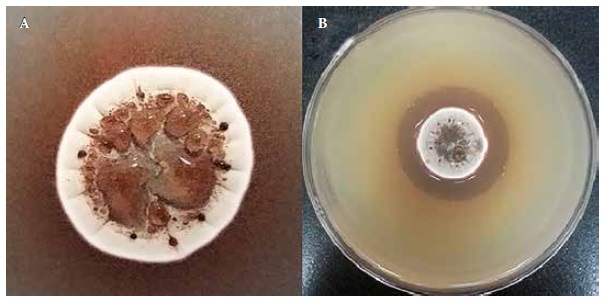 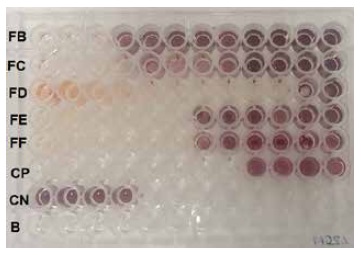