To evaluate the cytotoxic activity of the chloroform fraction of the Piper aduncum methanolic extract (PAMoCl) and its effect on the cell cycle in two gastric cancer cell lines: AGS and KATO III.

PAMoCl contains secondary metabolites with cytotoxic activity that have an effect on the G2/M phase of the cell cycle, in two gastric cancer cell lines, both primary and metastatic. The results of this study will allow us to deepen the search for more effective active ingredients found in PAMoCl for eliminating gastric cancer cells, but with less toxicity for healthy cells.

It has been reported in previous studies that the ethanolic extract from the Piper aduncum species presents cytotoxic activity against MCF-7 (breast cancer) and NCI-H460 (lung carcinoma) cells 1010. Herrera-Calderon O, Alvarado-Puray C, Arroyo-Acevedo J, Rojas-Armas J, Chumpitaz-Cerrate V, Hañari-Quispe R, et al. Phytochemical screening, total phenolic content, antioxidant, and cytotoxic activity of five peruvian plants on human tumor cell lines. Pharmacognosy Res. 2018;10(2);161-165. doi: 10.4103/pr.pr_109_17.
https://doi.org/10.4103/pr.pr_109_17... . However, the effect of the chloroform fraction from the Piper aduncum methanolic extract (PAMoCl) on gastric cancer cells has not been reported yet. Therefore, the aim of this study was to evaluate the cytotoxic activity of PAMoCl and its effect on the cell cycle in two gastric cancer cell lines: AGS and KATO III.

Motivation for the study: Due to the high mortality rate of gastric cancer in Peru, it is important to know if metabolites with cytotoxic activity against this type of cancer can be found in our environment.

Main findings: The chloroform fraction of Piper aduncum has cytotoxic activity, which causes the cell cycle to stop in the G2/M phase in 2 gastric cancer cell lines, one of them being the metastatic cell line.

Preparation of the chloroform fraction from Piper aduncum

The leaves were cleaned and dried at 40 °C during two days, then crushed and sieved with a 1 mm mesh. Then 70 g of powdered leaves were weighed, 300 mL of methanol was added and filtered using a Whatman No. 1 filter paper. This procedure was repeated eight times, from which the last three were sonicated for 2 hours. The entire PAMo was filtered using a 0.44 µm membrane. To obtain the PAMoCI, the PAMo was concentrated to 200 mL and extracted by adding 300 mL of chloroform in a 1 L decanting tube. This process was repeated 8 times. The PAMoCl was concentrated at reduced pressure with a rotary evaporator. The PAMo and the PAMoCl were analyzed by thin-layer chromatography (TLC) using silica gel 60 for the stationary phase and benzene-acetone 8:1 as the mobile phase; and it was then developed with iodine and ultraviolet (UV) light 1212. Bladt S. Plant Drug Analysis: A thin layer chromatography atlas. Springer Science & Business Media; 2009. doi: 10.1007/978-3-642-00574-9.
https://doi.org/10.1007/978-3-642-00574-... . Complementary tests were conducted to identify chemical groups for both PAMo and PAMoCl according to protocols described by Lock 1313. Lock OR. Invetigacion Fitoquimica, Metodos en el estudio de productos naturales. 1ra. edición. Lima: Pontificia Univ Catolica Peru; 2016.. Finally, the PAMoCl was treated to a concentration of 32 mg/mL in dimethyl sulfoxide (DMSO) and stored at -80 °C for later use. The analytical solvents were purchased from Merck.

Changes in cell morphology after incubation of AGS, KATO III and 293T cells with PAMoCl were observed and photographed on an inverted phase-contrast microscope (Nikon Eclipse TI) after 24 and 48 hours.

The Darzynkiewicz et al. protocol 1515. Crowley LC, Chojnowski G, Waterhouse NJ. Measuring the DNA content of cells in apoptosis and at different cell-cycle stages by propidium iodide staining and flow cytometry. Cold Spring Harb Protoc. 2016;2016(10):pdb-prot087247. doi: 10.1101/pdb.prot087247.
https://doi.org/10.1101/pdb.prot087247... , with slight modifications, was used to evaluate the effect of PAMoCl on the cell cycle. A total of 350,000 AGS and 500,000 KATO III cells were seeded in 100 × 15 mm petri dishes with DMEM-F12 and RPMI media. After 24 hours, the culture medium was replaced with a new DMEM-F12 medium and a complete RPMI containing PAMoCl at concentrations of 19.62 and 39.23 µg/mL for AGS cells and 87.49 and 160 µg/mL for KATO III cells; these concentrations were obtained from the cell viability assay. All plates were incubated for 24 hours at 37 °C and 5% CO2. After 24 hours, the plates were washed twice with phosphate buffer saline (PBS) 1X and trypsinized for 5 minutes. The resuspended cells were collected by centrifugation and fixed with cold 70% ethanol; then they were incubated at 4 °C for 30 minutes. Afterwards, the cells were stained with a propidium iodide solution (50 µg/mL) and RNase (100 µg/mL) for an additional 30 minutes and immediately analyzed in the Guava EasyCyte flow cytometer (Merck).

The absorbance data obtained from the cell viability assay were exported to a Microsoft Excel file and expressed as percentages with respect to the control group. For the dose-response relationship and the calculation of GI50, a non-linear regression model was used. The significant differences between groups were compared using the one-way ANOVA test with the Tukey test, as a post hoc test (p < 0.05), using the GraphPad Prism program. The cell cycle results were analyzed using the FCS 7 Express program (DeNovo solutions). The analyzed data are the result of three independent experiments.

The presence of metabolites in PAMo and PAMoCl was evidenced by TLC (Figure 1). The identification of the chemical groups are detailed in Table 1.

PAMoCl caused dose-dependent changes in the morphology of AGS, KATO III and 293T cells (Figure 4). After a 24-hour treatment with PAMoCl, starting at 20 µg/mL, AGS cells began to contract and others resuspended. At higher concentrations, such as 80 µg/mL and 160 µg/mL, more cell fragments, few resuspended cells and none attached were observed. After 48 hours the effect was similar. In the KATO III cell line, dead cells (Figure 4) are observed starting from 80 µg/mL, at both 24 and 48 hours. After a 24-hour treatment with PAMoCl, 293T cells began to contract at 80 µg/mL. At 160 µg/mL more contracted and resuspended cells were observed, however, cells could still be found adhering to the culture plate. At 48 hours, the observed effect was similar.

Effect on the cell cycle

This is the first reported study in which the cytotoxic activity of PAMoCl and its effect on the cell cycle is demonstrated in two gastric cancer cell lines: AGS and KATO III.

The GI50 values in this study for both cell lines are lower than those reported by Herrera et al. for the ethanolic extract of P. aduncum in the MCF-7, HT-29, K-562 and H-460 cell lines 1010. Herrera-Calderon O, Alvarado-Puray C, Arroyo-Acevedo J, Rojas-Armas J, Chumpitaz-Cerrate V, Hañari-Quispe R, et al. Phytochemical screening, total phenolic content, antioxidant, and cytotoxic activity of five peruvian plants on human tumor cell lines. Pharmacognosy Res. 2018;10(2);161-165. doi: 10.4103/pr.pr_109_17.
https://doi.org/10.4103/pr.pr_109_17... . It is important to mention that the GI50 values found for the AGS and KATO III lines are significantly lower than those of the 293T line, which is an embryonic human kidney cell line and was used as toxicity control. This shows that PAMoCl has a greater effect on gastric cancer cells than on noncancerous cells.

In the phytochemical analysis, 4 metabolite groups were detected in PAMoCl: phenolic groups and derivatives, flavonoids, anthocyanins, triterpenoids and steroids. This is why we consider important to study the identification of secondary metabolites using analytical techniques, such as chromatography, infrared spectroscopy, mass spectrometry and nuclear magnetic resonance that could allow us to elucidate the chemical structure of the active compounds.

However, it should be noted that there are limitations to this study. For example, the time and place for sample collection, the method of extraction, among others, factors that can generate variability in the quantity of metabolites and, consequently, in their biological activity.

In conclusion, it is reported that PAMoCl contains secondary metabolites with cytotoxic activity that causes the cell cycle to stop in the G2/M phase in two gastric cancer cell lines both primary and metastatic. The results from this study will allow to further search for active principles present in PAMoCl that have greater efficacy in eliminating gastric cancer cells, but with less toxicity for healthy cells.

To Dr. Juan Manuel Iglesias, head of the Molecular Genetics Laboratory of the Universidad Científica del Sur, for the donation of the 293T cell line used in this study. 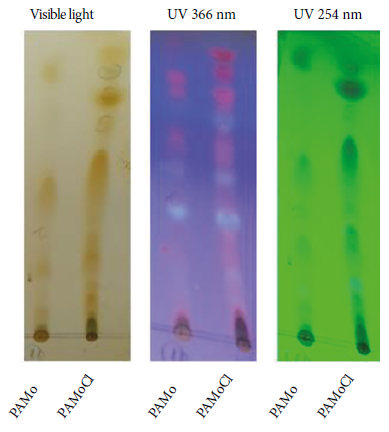 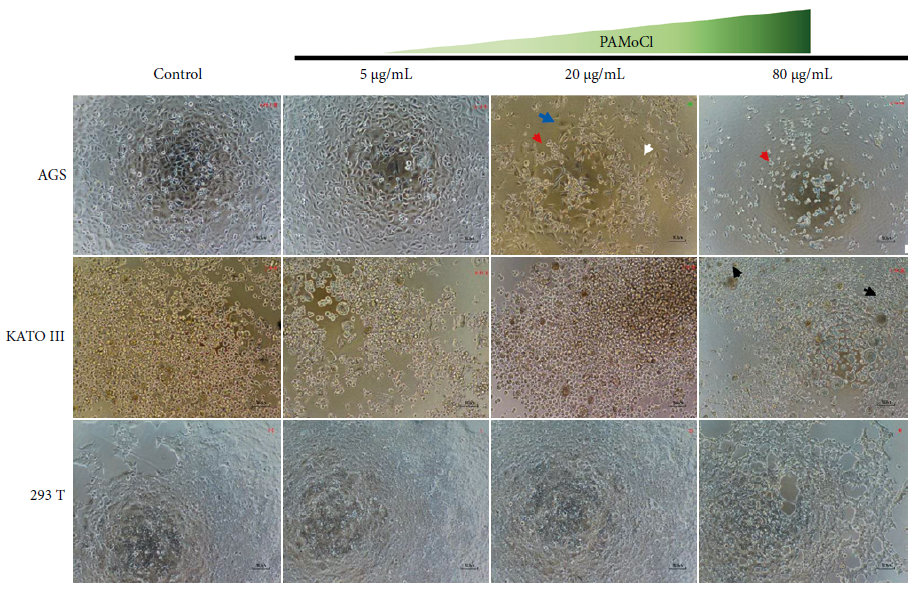 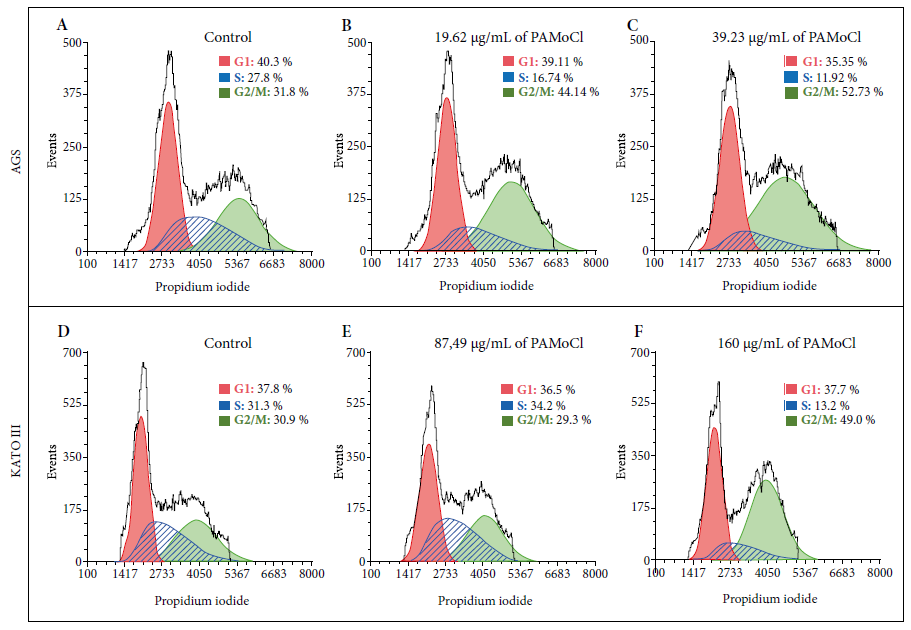