Clinical characteristics of pyrazinamide-associated hepatotoxicity in patients at a hospital in Lima, Peru

In order to determine the characteristics of drug-induced liver injury (DILI), adult patients diagnosed with tuberculosis and with an anti-tuberculosis treatment scheme including pyrazinamide were studied. The re-exposure process was used for the cause-effect analysis of the DILI. A total of 10 patients were found with pyrazinamide-associated DILI; the median age and hospital stay were 40.5 years (from 22 to 76 years) and 41 days (from 11 to 130 days), respectively. The median time in which the events appeared was 14 days (from 3 to 46 days); jaundice was observed in 4 patients and radiological patterns such as hepatocellular, mixed and cholestatic were found in 5, 3 and 2 patients, respectively. Mild presentation of DILI was observed in 6 cases (60%) and moderate in 3 (30%). In conclusion, pyrazinamide-associated DILI required prolonged hospital stay, presented jaundice in little more than a third of the cases, and radiologically, the hepatocellular pattern predominated.

Four antibiotics are used in the treatment of tuberculosis, three of which are administered simultaneously and are potentially hepatotoxic: isoniazid (H), rifampicin (R) and pyrazinamide (Z). When the causality relationship between the antitubercular drugs administered and the DILI is analyzed, it is generally established that the three drugs are associated, since the administration was simultaneous. The most commonly used instrument to establish the cause-effect relationship of a drug and DILI is the Roussel Uclaf Causality Assessment Method (RUCAM) 33. Danan G, Teschke R. RUCAM in Drug and Herb Induced Liver Injury: The Update. Int J Mol Sci. 2015;17(1):14. doi: 10.3390/ijms17010014.
https://doi.org/10.3390/ijms17010014... , an algorithmic scorecard that allows us to determine whether the injury is hepatocellular, cholestatic, or mixed. However, when a patient receives more than one potentially hepatotoxic drug, as in the treatment of tuberculosis, RUCAM recommends considering these three drugs as one 44. Aithal GP, Watkins PB, Andrade RJ, Larrey D, Molokhia M, Takikawa, et al. Case definition and phenotype standardization in drug-induced liver injury. Clin Pharmacol Ther. 2011;89(6):806-815. doi: 10.1038/clpt.2011.58.
https://doi.org/10.1038/clpt.2011.58... , so it is difficult to establish whether the DILI was associated exclusively with pyrazinamide.

There is no information available about about the characteristics or phenotypic models of DILI associated with pyrazinamide. The cases reported in Peru tend to relate the three drugs (H, R, and Z) to DILI without specifying whether it was possible to identify pyrazinamide 55. Reto Valiente LV, Castillo Vergara J, Pichilingue Reto P, Pichilingue Prieto OA. Hepatotoxicidad por Fármacos Antituberculosos en Pediatria. Rev Gastroenterol Peru. 2005;25(4):362-365.. The objective of this study is to describe the clinical and laboratory characteristics of pyrazinamide-induced DILI using RUCAM criteria.

Motivation for the study: Hepatotoxicity induced by antitubercular drugs represents a problem during treatment; adverse reactions related to rifampicin and isoniazid are well known, however, studies on pyrazinamide specifically are scarce.

Main findings: This study shows that pyrazinamide-induced hepatotoxicity begins at the third week of exposure, jaundice occurs in one-third of cases, and the predominant pattern is hepatocellular.

Implications: The study and adequate phenotyping of pyrazinamide-induced hepatotoxicity would allow its prevention through future pharmacogenetic studies.

This is an observational and retrospective study. We reviewed the medical records of hospitalized patients diagnosed with DILI by antitubercular drugs, from January 2014 to January 2019, at Almenara Hospital, in Lima, Peru, a high-complexity referral national hospital.

The inclusion criteria were age >18 years, diagnosis of tuberculosis by baciloscopy and/or culture, and use of pyrazinamide as part of the treatment. The existence of signed informed consent for antitubercular treatment was verified in all patients.

Procedure to identify DILI by pyrazinamide

To identify the association with pyrazinamide, the four-phase process was verified in the clinical records: exposure, drug withdrawal, re-exposure 66. Sharma SK, Singla R, Sarda P, Mohan A, Makharia G, Jayaswal A, et al. Safety of 3 different reintroduction regimens of antituberculosis drugs after development of antituberculosis treatment-induced hepatotoxicity. Clin Infect Dis. 2010;50(6):833-839. doi: 10.1086/650576.
https://doi.org/10.1086/650576... , and evolution (follow-up). The exposure phase included the administration of drugs (for example, rifampicin, isoniazid, ethambutol, and pyrazinamide in the scheme for sensitive tuberculosis) and identification of the DILI criteria. The drug withdrawal phase consisted of the withdrawal of all the drugs, until the normalization of the liver enzymes was achieved. The re-exposure phase is where the drugs are progressively administered again one by one, generally starting with ethambutol then rifampicin, followed by isoniazid and finally pyrazinamide. The second method used to determine the specific association of DILI with pyrazinamide was the verification of the sole and exclusive suspension of pyrazinamide and not the observation of DILI criteria during the evolution and follow-up of the patient.

In the review of medical records, data such as age, sex, alcohol and cigarette consumption, weight and height were obtained. To identify the characteristics of DILI, symptoms, signs, number of days of hospitalization, ALT, ALP, GGT levels were included. The registration of the pyrazinamide re-exposure process and anti-tuberculosis treatment at patient’s discharge was verified.

Variables were analyzed as frequencies by using median, range and percentages. To obtain the number of times the ALT and ALP increased over the UNL in the reported cases, the serum value obtained from the patient with the LSN was divided by the UNL.

This study was approved by the Ethics Committee of the Almenara Hospital. The necessary strategies were established to maintain the privacy of patient information.

During the study period, 507 cases of tuberculosis were admitted to Almenara Hospital, of which 10 (1.9%) were due to pyrazinamide-associated DILI (Table 1 and 2). The median number of hospitalization days for pyrazinamide-associated DILI was 41 (range 11-130). The diagnosis was pulmonary, pleural, and multisystemic tuberculosis in 7, 2, and 1 case, respectively. The median age was 40.5 years. The evolution was favorable in all patients.

Causality of DILI and pyrazinamide

The association of DILI with pyrazinamide was made in 8 patients through the re-exposure process; 2 patients were left out because only pyrazinamide was suspended, and the remission of the event was verified. Eight patients with pan-susceptible tuberculosis at the time of DILI, were taking rifampicin, isoniazid, ethambutol, and pyrazinamide and were referred and hospitalized because of DILI. During hospitalization, the re-exposure process was performed, which identified pyrazinamide as associated with DILI and ruled out isoniazid and rifampicin. Regarding the pregnant patient, re-exposure was carried out during the postpartum period, which identified pyrazinamide as associated with DILI, and continued treatment with rifampicin, isoniazid, and ethambutol (Table 1).

In this study, pyrazinamide-associated DILI was found to be more frequent in the third week of administration, 40% of the cases presented jaundice, and the predominant injury pattern was the hepatocellular pattern. Regarding severity, mild and moderate DILI cases were the most frequent. Only 1.97% of the patients were hospitalized for DILI, and the hospitalization duration median was 41 days.

This study’s findings can be compared with two previous studies. Abbara et al.77. Abbara A, Chitty S, Roe JK, Ghani R, Collin SM, Ritchie A, et al. Drug-in-duced liver injury from antituberculous treatment: a retrospective study from a large TB centre in the UK. BMC Infect Dis. 2017;17(1):231. doi: 10.1186/s12879-017-2330-z.
https://doi.org/10.1186/s12879-017-2330-... found that more than half of the cases occur in the first two weeks and the jaundice frequency is 12% of the cases; the DILI and RUCAM criteria were used as a causality tool; and they described the clinical and biochemical characteristics of 105 patients with DILI by antitubercular drugs (rifampicin, isoniazid, and pyrazinamide). However, the process of pyrazinamide reintroduction was not performed. An et al. found that DILI is more frequent in women, 21% of the population with DILI had jaundice, and in 75% it occurred before 2 months and was more frequent in those who received the scheme with pyrazinamide; the report did not describe the causality instrument used 88. An H, Wu X, Wang Z, Xu J, Zheng S, Wang K. The clinical characteristics of anti-tuberculosis drug induced liver injury in 2457 hospitalized patients with tuberculosis in China. Afr J Pharm Pharmacol. 2013;7(13):710-714., nor did it separate its findings from the Z-induced DILI.

In conclusion, pyrazinamide-associated DILI starts at the third week of exposure, presents jaundice in more than a third of the cases, the hepatocellular pattern predominates and has prolonged hospital stay.

To the general staff, resident Physicians, specialist physicians and to the head of the Pneumology Service of Almenara Hospital, ESSALUD, in Lima, Peru.

TO conceptualize the article, analyzed the data, wrote and approved the final version of the manuscript. SM has contributed with information about patients and data collection. JA was in charge of analyzing data and conducting a critical review of the article. 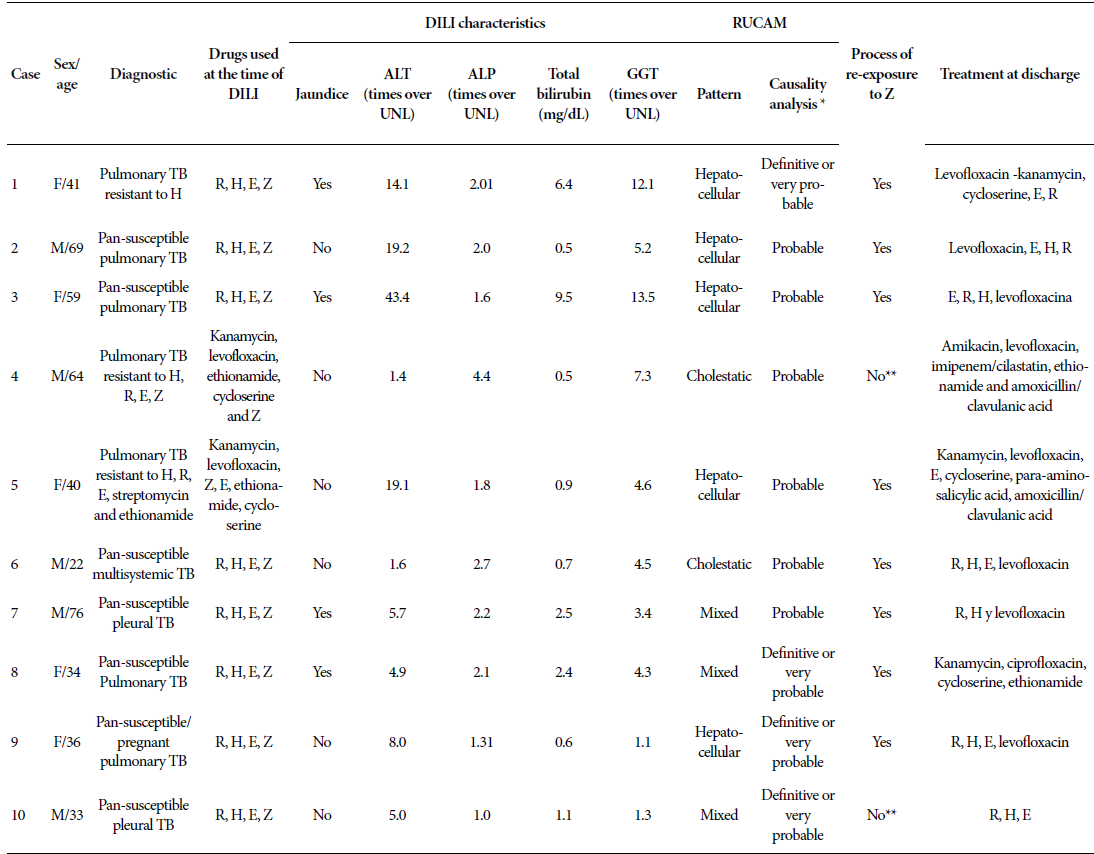