Salmonella enteritidis has become an important cause of food poisoning throughout the world (1-3). For a long time in the Caribbean region S. enteritidis was rarely associated with human infections (4). In the early 1990s, however, a number of outbreaks and sporadic cases implicating the microorganism were reported (5). There was a subsequent phenomenal increase in the involvement of S. enteritidis in reported cases of food poisoning (6).

To date, there have been no reports on the characteristics of S. enteritidis isolated from the Caribbean, nor have there been reports on the relatedness of isolates implicated in foodborne gastroenteritis.

This study utilized PFGE to investigate the relationship between S. enteritidis isolates recovered from gastroenteritis cases in various Caribbean countries and to determine the antibiograms of the isolates.

The Caribbean Epidemiology Center (CAREC), Port of Spain, Trinidad, is the regional reference laboratory for Salmonella, and it served as the source of the S. enteritidis isolates we studied. All Salmonella clinical isolates from CAREC's 21 Member Countries (mainly English-speaking) in the Caribbean sub-region are sent to CAREC for serological typing. Table 1 shows the number of S. enteritidis isolates from gastroenteritis cases (sporadic or outbreak) that we obtained from CAREC and studied. All viable isolates of S. enteritidis in the collection of CAREC were selected for study.

Overall, we tested a total of 129 S. enteritidis isolates, with 122 originating from human clinical cases and 7 (from Trinidad and Tobago) from animals. It was not possible to determine which of the isolates originated from outbreaks of gastroenteritis since in the Caribbean region there is no routine investigation or reporting of foodborne outbreaks.

For our testing all the S. enteritidis strains were plated for isolation on blood agar. Colonies of pure cultures were then inoculated into 5 mL of brain heart infusion broth and incubated overnight at 37 °C to attain log phase growth. An aliquot (1.3 mL) of cell suspension of each isolate was centrifuged at 12 000 X g for 90 seconds. To prepare bacterial DNA we used a procedure described earlier (15).

Agarose plugs were cut into slices to fit gel wells and equilibrated for 15 minutes at room temperature in tubes containing 200 mL of restriction enzyme buffer (Stratagene, La Jolla, California, United States of America). The buffer was then decanted and replaced with 200 mL of fresh restriction enzyme buffer for a further 15 minutes of equilibration at room temperature. Restriction digests were done as described earlier (15).

A 1.0% SeaKem gel (FMC BioProducts, Rockland, Maine, United States) was prepared in 0.5X TBE buffer 60-90 min prior to completion of the restriction enzyme digestion of bacterial DNA and allowed to solidify at room temperature. DNA digested with either XbaI or SpeI in gel slices was placed in the wells of SeaKem gel and sealed in place with molten 1% agarose in 0.5X TBE buffer. To wells 1 and 15 of each gel was added standard molecular size markers (lambda ladder). For each run, the sealing agar was allowed to solidify at room temperature and the gel was thereafter transferred into a CHEF-DR III electrophoresis chamber (Bio-Rad Laboratories, Hercules, California, United States) and submerged in chilled 0.5X TBE. Electrophoresis was performed at 200 V for 20 h with the pulse time ramped from 2 seconds to 40 seconds and the buffer temperature maintained at 14 °C. The gel was subsequently stained in ethidium bromide (0.5 mg/mL) solution for 30 min at room temperature and then destained in distilled water for approximately 1 h prior to photography under ultraviolet light.

Polaroid photographs of PFGE patterns were recorded by a desktop scanner (Hewlett-Packard, Boise, Idaho, United States) and subsequently subjected to a computerized artificial neural network analysis described earlier (15). Grouping was based on location and number of bands in the range of 50 kb to 550 kb.

Following the identification of the PFGE distinct groups detected by XbaI digestion, a representative of each of the 13 groups subjected to XbaI digestion was digested with SpeI restriction enzyme using fresh plugs, and the pattern was noted.

Determination of antibiograms of isolates 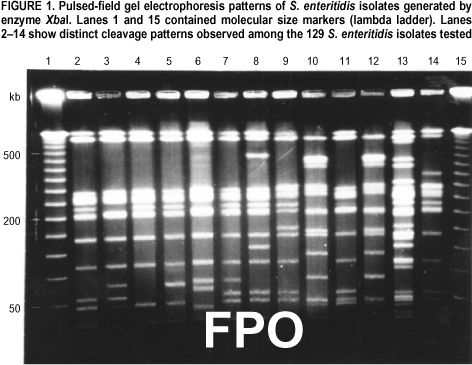 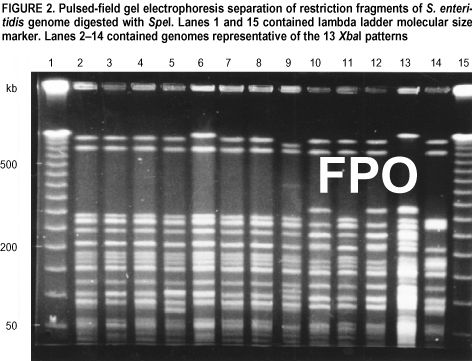 The pattern was different in the subsequent period, of 1994 through 1996, with Trinidad and Tobago replacing Barbados as the country from which the largest number of S. enteritidis isolates were reported. Of a total of 173 isolates submitted to CAREC over those 3 years, 132 of them (76.3%) were from Trinidad and Tobago, 35 (20.2%) from Barbados, 6 (3.5%) from Saint Lucia, and 0 (0.0%) from Saint Kitts and Nevis.

It was of epidemiological significance to find that the strains of S. enteritidis displayed a distinct geographical distribution. The XbaI PFGE group 1 strains were predominantly found in Trinidad and Tobago, while group 2 strains were much more prevalent in Barbados. Although there was a slight overlap of XbaI PFGE groups 1 and 2 between the two countries, it was evident that the strains of S. enteritidis responsible for gastroenteritis in Trinidad and Tobago and in Barbados differ significantly. The small number of isolates of S. enteritidis available for study from Saint Lucia and from Saint Kitts and Nevis made it difficult to draw any inferences on the PFGE patterns of isolates from these countries.

In Trinidad and Tobago, regardless of the source of strains (human versus animals, and geographical location) of S. enteritidis and the year of isolation, XbaI PFGE group 1 strains predominated, emphasizing the importance of this strain in gastroenteritis in the country. However, it was difficult to associate the various XbaI groups with outbreaks of gastroenteritis caused by S. enteritidis. That is because outbreaks of foodborne disease are rarely reported or investigated in the Caribbean. Therefore, a high percentage of the S. enteritidis isolates sent to CAREC for serotyping may have originated from either sporadic cases or outbreaks. PFGE has been employed in various studies for epidemiological investigations in sporadic and large outbreaks of salmonellosis caused by S. enteritidis (3, 14, 19).

If was of zoonotic relevance that in Trinidad and Tobago some of the strains of S. enteritidis of animal origin belonged to the same PFGE group as those isolated from human gastroenteritis. S. enteritidis infections in humans have been reported to originate frequently from animals, particularly poultry (20-22).

Regardless of the country of origin or the year of isolation of S. enteritidis, we found that the prevalence of resistance to most of the antimicrobial agents that we tested was low. Resistance to triple sulfur was comparatively high (46%), a finding in agreement with other reports (23, 24). Resistances to furadantoin (7.8%), ampicillin (5.4%), and carbamycin (3.9%) were also similar to what others have reported (21). Outside the Caribbean, however, a considerably higher prevalence of resistance to ampicillin has been reported. In Greece, for example, 30% of S. enteritidis isolates were resistant (18). While the antibiograms of S. enteritidis strains can be used to determine the relatedness of strains (18), they were not helpful in epidemiological association in this study.

From our research we can conclude that S. enteritidis has attained some clinical significance in gastroenteritis in the Caribbean, with a particularly dramatic change in Trinidad and Tobago. In addition, the PFGE we performed clearly demonstrated that in Barbados and in Trinidad and Tobago there are distinctly different strains of S. enteritidis involved in gastroenteritis.

Acknowledgments. We thank the Inter-American Development Bank for funding the stay of the principal author at the University of Missouri, and for part-sponsorship of the research materials. The assistance rendered by Denise Clarke of the Caribbean Epidemiology Center in making the isolates available is appreciated. Zobaida Khan of the Public Health Laboratory, Port of Spain, kindly assisted in subculturing the isolates. Beverly Hartman is thanked for typing the manuscript.

22. Heffernan HM. Antibiotic resistance among Salmonella from human and other sources in New Zealand. Epidemiol Infect 1991;106: 17-23.