OBJECTIVES: To describe demographic and practice characteristics of male and female midwives in private practice (MIPPs) in 10 cities of Peru, and their role in the delivery of reproductive health care, specifically management of sexually transmitted infections (STIs).
METHODS: As part of an intervention trial in 10 cities in the provinces of Peru designed to improve STI management, detailed information was collected regarding the number of midwives in each city working in various types of practices. A door-to-door survey of all medical offices and institutions in each city was conducted. Each MIPP encountered was asked to answer a questionnaire regarding demographics, training, practice type(s), number of STI cases seen per month, and average earnings per consultation.
RESULTS: Of the 905 midwives surveyed, 442 reported having a private practice, either exclusively or concurrently with other clinical positions; 99.3% of these MIPPs reported managing STI cases. Andean cities had the highest density of MIPPs, followed by jungle and coastal cities, respectively. Jungle cities had the largest proportion of male MIPPs (35.5%). While both male and female MIPPs reported seeing male patients, male MIPPs saw a significantly greater number than their female counterparts.
CONCLUSIONS: In areas of Peru where physicians are scarce, MIPPs provide needed reproductive health services, including STI management. Male MIPPs in particular appear to serve as health care providers for male patients with STIs. This trend, which may exist in other developing countries with similar healthcare workforce demographics, highlights the need for new areas of training and health services research.

Since antiquity, the role of childbirth attendants has been recognized within communities as an important part of the social fabric. While many forms of apprenticeship for this vocation evolved across different cultures, it was not until the 17th century that the first official schools of midwifery were founded in Europe and the tenets of midwifery as a professional discipline were developed. While historically the role of midwives has focused on childbirth, midwives in Peru, as in other parts of the world, have sought to develop an important role in the comprehensive reproductive health care of women, including sexually transmitted infection (STI) management (1).

In recent years, cultivating and prioritizing the training of midwives in reproductive health has received increasing emphasis in Peru. Literature about this trend, however, remains limited. Information is particularly scarce regarding midwives in private practice (MIPPs), despite the fact that they represent a considerable proportion of the workforce.

As part of the PREVEN project, an interventional trial in 10 cities of Peru designed to improve private-provider management of STIs (2), a baseline survey of physicians and MIPPs in these cities was conducted to describe patterns in demographics and practice characteristics and their role in the delivery of reproductive health care, specifically management of STIs. The results of the survey of physicians were published previously (3). This article summarizes the results of the findings of the midwives survey.

A registry was prepared of midwives from the 10 cities in Andean, coastal, and jungle regions of Peru with populations greater than 50 000 (excluding Lima), based on a list from the Peruvian College of Midwives and complemented by data on midwives working for the Ministry of Health (MINSA) provided by the regional health directorates. In addition, comprehensive mapping of midwives' offices, obstetric clinics, polyclinics, large private hospitals, and other health institutions was carried out in each city. All midwives from this registry were visited by the study coordinators (mainly in their workplaces or at their homes); informed of the purpose of the study; and asked for their consent to participate. Inclusion in the survey required participation in any type of private practice, regardless of concurrent employment in the public or nonprofit sector. The goal was to reach all MIPPs in each of the cities, so no sampling was performed. The rate of non-response was less than 1%. The study was performed in July and August of 2003.

The questionnaire was conducted in a face-to-face manner and included questions regarding demographic information; professional training; number and type of private, public, or other practices currently engaged in; number of patients seen per month; number of STI cases seen per month; and average fee per consultation. Each midwife was also asked to list the three most common STIs encountered in his or her private practice.

All information collected was entered into an Excel database (Microsoft Office 2003; Microsoft Corporation, Redmond, WA, USA). Depending on the distribution of the variable in question, either means or medians were used to determine the central tendency of the data. Frequencies were obtained for nominal variables, and an independent one- or two-sample Student's t-test was used to perform stratified analyses of certain variables. Statistical analyses were performed using Intercooled Stata (version 8.0; Stata Corporation, College Station, TX, USA).

Evaluation of MIPPs' professional training showed that the majority surveyed (89.4%) were trained in the provinces, followed by a small percentage that trained in Lima (9.9%), and an even smaller percentage that received training abroad (0.7%). Of the 442 MIPPs surveyed, 57% reported having participated in courses or workshops specifically targeting STI management in the past 10 years.

Of the MIPPs surveyed, 360 (81.5%) were female, and the average age among both men and women was 36.3 years, with no significant difference found when stratified by gender (p = 0.345) (Table 2). The greatest proportion of male MIPPs was seen in the jungle region, where they represented 35.5% of all MIPPs (versus 15.0% in the Andean region and 12.6% in the coastal region). The average fee per consultation for all MIPPs was US$ 4.27, with no significant difference found between genders (p = 0.947). While both male and female MIPPs reported seeing male patients, among the 442 MIPPs surveyed, male midwives were more likely to see male patients than their female counterparts (8 male patients per month versus 4 per month, respectively; p < 0.005). No significant difference was found between the median number of female patients seen by male and female MIPPs (28 female patients per month versus 32 per month, respectively; p = 0.976). 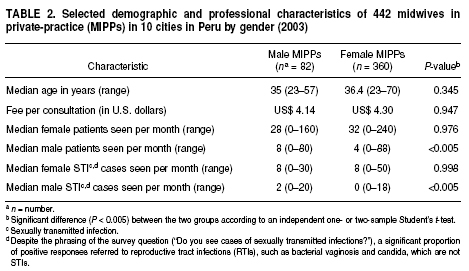 Of the 442 MIPPs surveyed, 439 or 99.3% responded affirmatively to the question: "Do you see cases of sexually transmitted infections?"2 When analyzed by gender of provider, male MIPPs reported seeing more male patients with STIs per month compared to female MIPPs (2 male STI cases per month versus 0, respectively; p < 0.005). By comparison, the median number of female STI cases seen per month was equal among male and female providers (8 female STI cases per month for both groups; p = 0.998). The MIPPs surveyed were also asked to report the most commonly encountered STIs in their private practice. Among STIs reported according to syndrome, the most commonly reported conditions were vaginal discharge, pelvic inflammatory disease, and cervicitis. Among STIs reported by etiology, the most commonly reported infections included trichomonas, candida, bacterial vaginosis, gonorrhea, and syphilis.

Since the role of skilled birth attendants in the prevention of perinatal transmission of human immunodeficiency virus (HIV) first became apparent, increasing attention worldwide has been given to the formal incorporation of midwives into reproductive health activities beyond childbirth. While defining the exact nature of this role remains controversial (particularly in regard to "traditional" birth attendants trained through apprenticeship) and presents important challenges in training and education, it is inarguable that in the developing world midwives' contribution to comprehensive reproductive health care, including STI management, is extremely valuable (5-7).

In Peru, the College of Midwives has produced a document describing midwives' core professional competencies, which include the ability to promote sexual and reproductive health with a focus on management and follow-up of female and male patients and syndromic management of STIs (8). Although the International Confederation of Midwives has defined the role of the midwife to include counseling and education of "not only the woman, but also . . . the family and the community,"3 standard guidelines for the provision of care to male patients are not universal. For example, in Chile, the midwife's responsibilities include providing comprehensive reproductive health services to women and/or their partners (9), whereas in Argentina the guidelines for midwifery practice do not specifically elaborate care of male patients (10).

In Peru, as in many Latin American countries, the majority of medical schools, as well as job and academic opportunities, and medical facilities and resources, are located in the capital city. The distribution of physicians in Peru has therefore remained disproportionately high in Lima and coastal cities, and low in the Andean and jungle regions, despite increased accreditation of medical schools in the provinces over the past few decades (11). With fewer doctors available, provincial communities rely on the availability of non-physician providers, including traditional healers, to address health concerns.

The first school of midwifery was founded in Lima in 1830 at the National University of San Marcos (Universidad Nacional Mayor de San Marcos). It was not until 1976 that Peru's second school of midwifery was founded at Santa Maria University (Universidad Santa María) in the Andean city of Arequipa. Over the past three decades, however, the number of midwifery schools has grown to 25 in 17 different cities in Peru (1, 12). This growth and broader distribution of midwifery teaching facilities has allowed for increased local training of midwives, as supported by this study's findings that 89.4% of MIPPs were trained in the provinces (versus only 9.9% trained in Lima).

Studies in other developing countries suggest that, along with the limited number of physicians in provincial areas, convenience and cost play a role in patients' frequent reliance on non-physician health services for primary care concerns such as STIs (13). In the cities included in this study, for example, a typical private physician visit can cost around US$ 8.00 (3), whereas a consultation with a midwife averages only US$ 4.27.

Limitations of this study include the lack of information regarding MIPPs in Peru's capital city of Lima. This exclusion is a result of the design of the main intervention study, which was directed to pairs of Peruvian cities other than Lima. Therefore, the results of this study only reflect the status of health care resources and midwife training in the provinces. In addition, the STI cases (see footnote 2) mentioned in this study were not identified by laboratory diagnosis and were only reported by the midwives, who may or may not be properly trained to identify the etiologies.

The study data add a valuable dimension to the literature regarding midwives in Peru by examining MIPPs as an important subpopulation of health providers and highlighting the role of male midwives in providing reproductive health services for men. These findings could help justify and lay the groundwork for important new training in areas such as the diagnosis and management of male and female STIs, specifically targeted toward MIPPs, who may not have access to similar programs offered in the public sector.

To guide the development of these types of training programs, future studies should seek to better characterize the range of patients seen by midwives and the types of reproductive health services sought by special patient groups such as male patients. In addition, studies should evaluate exposure to and participation in government-sponsored training programs, the actual number of STI cases seen by midwives, and current STI management practices among midwives.

6. Klingberg-Allvin M, Van Tam V, Nga NT, Ransjo-Arvidson AB, Johansson A. Ethics of justice and ethics of care. Values and attitudes among midwifery students on adolescent sexuality and abortion in Vietnam and their implications for midwifery education: a survey by questionnaire and interview. Int J Nurs Stud. 2007;44(1):37-46.