The Revista Panamericana de Salud Pública/Pan American Journal of Public Health publishes letters from readers for the purpose of stimulating dialogue on various aspects of public health in the Americas and of constructively clarifying, discussing, and critiquing the ideas expressed throughout its pages. Letters should be signed by the author and include his or her professional affiliation and mailing address. If a commentary on a given article requires a reply from the author, an effort will be made to obtain the reply and to publish both letters. The editorial team reserves the right to edit all letters received and to condense them so as to improve their clarity.

VIOLENCE AND HEALTH IN THE AMERICAS: PROJECTIONS TO 2030

In 2002, an estimated 1.6 million people worldwide died as a result of self-inflicted, interpersonal, or collective violence. This number is roughly half the number of deaths due to HIV/AIDS, nearly equal to the number of deaths due to tuberculosis, somewhat greater than the number of deaths due to malaria, and 1.5 times the number of road traffic deaths. Of the total 1.6 million victims of violence, about one-third (560 000) were homicides, a further 870 000 people killed themselves, and an estimated 170 000 died as a direct result of collective violence. A disproportionate share of the burden of violence affects developing countries. In addition to the high annual death toll, each year millions of people suffer nonfatal health consequences of violence including injury and disability, mental health and other behavioral disorders, poor reproductive health, and long-lasting implications including increased risk for chronic diseases. 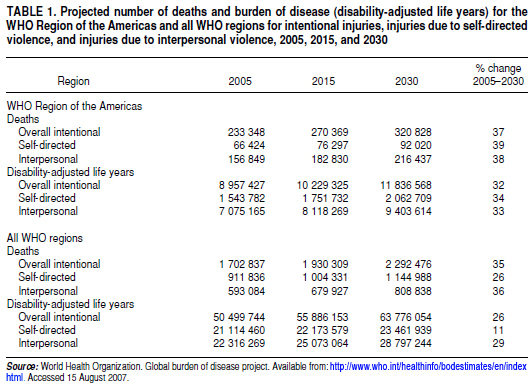 Despite this evidence, violence prevention is largely absent from global lists of priorities such as the millennium development goals and is rarely the focus of governmental, nongovernmental agency, and philanthropic-donor-sponsored fieldwork. When violence is addressed, it is most often in the context of collective violence rather than self-directed or interpersonal violence and often is not integrated into the health sector.

We must continue to remind ourselves that violence is not an inevitable aspect of the human condition (1). In much the same way as communicable diseases and other conditions have been threats to public health in the past, violence can be prevented and its impact can be reduced by applying science-based approaches at the population level as set forth in the World Report on Violence and Health (1) and its companion document Preventing Violence: A Guide to Implementing the Recommendations of the World Report on Violence and Health (2).

Reducing the global burden of violence will necessitate action on many fronts. In addition to applying a public health approach to violence, a successful response to violence will require a concerted effort to place violence prevention into major development agendas and instruments as well as country-level work, a massive mobilization of additional resources, a multisectoral approach, and a scaling up of evidence-based interventions. The goal must be to improve the on-the-ground response to violence and its consequences to not only achieve reductions in mortality and disability but also to reduce morbidity and long-term consequences and noninjury health outcomes.

The findings and conclusions in this report are those of the author alone.

2. World Health Organization. Preventing violence: A guide to implementing the recommendations of the world report on violence and health. Geneva: WHO; 2004.