Physicians' responsibility for antibiotic use in infants from periurban Lima, Peru

OBJECTIVE: To describe the use of antibiotics in Peruvian children under 1 year in a setting where they are available without a prescription.
METHODS: Data were analyzed from a cohort study between September 2006 and December 2007 of 1 023 children < 2 months old in periurban Lima, Peru, followed until they were 1 year old.
RESULTS: Seven hundred seventy of 1 023 (75.3%) children took 2 085 courses of antibiotics. There were two courses per child per year (range 012). Higher rates of antibiotic use were found in children 36 months old (37.2%). Antibiotics were given to children for 8.2% of common colds, 58.6% of all pharyngitis, 66.0% of bronchitis, 40.7% of diarrheas, 22.8% of dermatitis, and 12.0% of bronchial obstructions. A physician's prescription was the most common reason for antibiotic use (90.8%). Medication use without a prescription was found in 6.9% of children, and in 63.9% of them it was preceded by a physician's prescription.
CONCLUSIONS: Infants are often exposed to antibiotics in this setting. Overuse of antibiotics is common for diagnoses such as pharyngitis, bronchitis, bronchial obstruction, and diarrhea but is typically inappropriate (83.1% of courses) based on the most common etiologies for this age group. Interventions to improve the use of antibiotics should focus on physicians, since a physician's prescription was the most common reason for antibiotic use.

Antibiotics are important weapons for fighting infections. Since they were discovered, they have significantly reduced child mortality and increased life expectancy. Worldwide, they are the most commonly prescribed drugs for children, especially for acute respiratory illnesses and diarrhea (14). Increasing antibiotic resistance is usually attributed to overuse and misuse of antibiotics (57); it has been estimated that use is unnecessary in 20%50% of the courses (810). Unfortunately, misuse of antibiotics is causing the emergence of resistant pathogens early in life, especially in the developing world where antibiotics are available without prescriptions (3, 1117). But misuse of antibiotics and the emergence of antibiotic resistance is not confined to developing countries; the increase in resistant pathogens is spreading worldwide (11, 17, 18).

Patterns of greater resistance to antibiotics necessitate the use of newer and more expensive drugs in order to control infections; this pattern increases health care inequalities (11) and may contribute to higher risk of morbidity and mortality in small infants treated for serious infections in the developing world. In Peru, several studies have shown patterns of high resistance in respiratory bacteria and enteropathogens in children, probably due to abuse and misuse of antibiotics (12, 13, 15, 1921). Since the pediatric population has the highest rates of antibiotic prescribing in primary care (1, 2), it is a recognized target group for interventions that aim to reduce unnecessary use of antibiotics.

Few data are available on antibiotic use in children from the developing world; there is scant information on antibiotic use in infants in Peru. This study aims to describe the use of antibiotics in Peruvian infants, showing the dimensions and characteristics of the problem in order to identify possible targets for future interventions.

This descriptive cohort study used prospectively recorded data from the clinical records of 1 066 children participating in a clinical trial that evaluated the safety of a new hexavalent vaccine1 and data from a passive diarrhea surveillance study of the same cohort in Lima, Peru (28). Secondary data were analyzed by reviewing 1 023 medical records of the 1 066 children who participated in the original study.

During the original study 1 066 children < 2 months old were enrolled and followed until they were 12 months old. At enrollment, previous drug use of the child was recorded in the clinical record. They had scheduled visits and could attend the clinic when they were ill, and the study physician provided treatment advice. This arrangement provided better access to medical care than is available to the average child in Lima, since it was a cost-free service. However, parents of children participating in the trial had to buy the medications as opposed to what happens at health facilities where many receive them for free. The provision of any drug during the trial was not considered a benefit for the original study.

Six physicians worked during the study; all of them were general physicians. A history of children's previous illnesses and drug use from birth to enrollment were recorded in the medical record as well as a detailed history of illness, prescribed drug use, and treatment offered at home by the parents between scheduled visits.

Diagnoses were grouped as upper respiratory tract infections (URTIs), including pharyngitis, common colds, and otitis, and lower respiratory tract infections (LRTIs), which included bronchitis and pneumonia. Analyses used data for antibiotic courses, even if more than one antibiotic was prescribed for some diagnoses. For the purpose of analysis and according to the most likely etiological agents in this age group (< 12 months old), use of antibiotics was considered inappropriate for the following diagnoses: pharyngitis, common colds, bronchitis, bronchial obstruction, diarrhea (excluding dysentery), and dermatitis (29). Antibiotic use data were analyzed with STATA 10 statistical packages.

The study was presented and approved by the Ethical Review Board of the Instituto de Investigación Nutricional (resolution number 281-2009). As this study was a secondary data analysis study, which used data from medical records, informed consent was not needed. 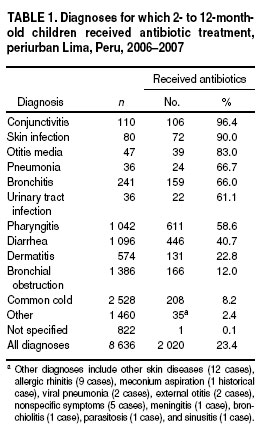 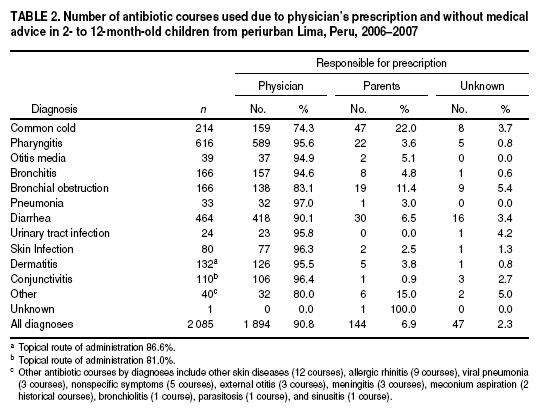 Physicians were responsible for 1 894 courses (90.8%) of antibiotics. Medication provided by parents was documented in only 6.9% (Table 2), where no record of a prescription from a nurse or a pharmacist was found in the medical records. From 144 courses of parent-provided antibiotics, 92 (63.9%) were preceded by an antibiotic prescription from a physician; 44 of those children (30.6%) received the same antibiotic they had taken previously. Parents used antibiotics without a prescription mainly for diagnoses like common colds (32.6%) and diarrhea (20.8%), while physicians prescribed antibiotics mainly for children with pharyngitis (31.1%) and diarrhea (21.1%) (Table 2). 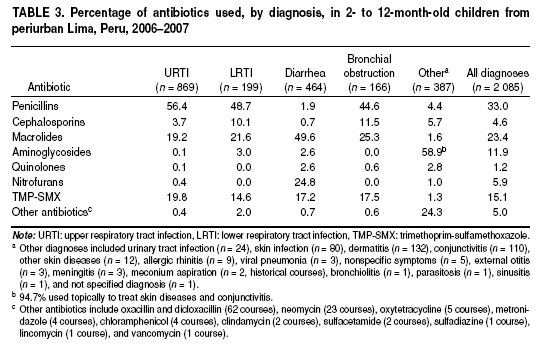 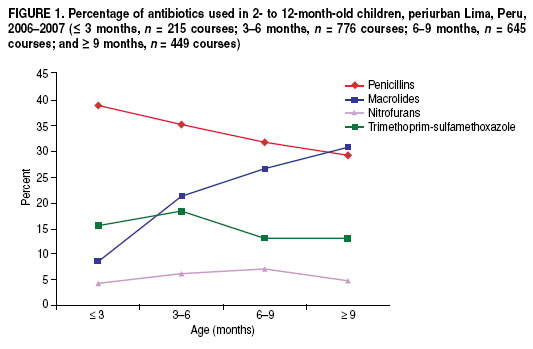 Antibiotic usage rates were significantly higher in males (56.4%, P = 0.001). Events associated with antibiotic use were mostly mild (89.2%); events of moderate and severe intensity were rare (8.8% and 1.8%, respectively), and three events had no registered intensity. Route of administration was mainly oral (84.4%); less frequently used routes were topical (12.2%) and intravenous or intramuscular (3.4%). Topical routes included dermal (59.2%), ophthalmic (40.4%), and otic (0.4%). In 477 courses of antibiotic use, data were available for total days of use. Mean duration of antibiotic use was 5.7 days (standard deviation 2.1 days).

This study offers strong evidence of antibiotic overuse in small children, showing that infants from periurban Lima are commonly exposed to antibiotics. Among children

As in other studies, the most frequently used antibiotics were penicillins (32.9%) (2, 18, 27). The second most commonly used antibiotics were macrolides (23.4%). TMP-SMX (15.1%) was next most common, in contrast to data from other studies in the developing world but following the trend of antibiotic use in developing countries (18). Macrolides were used more frequently in children > 9 months old and in children with diarrhea, which is probably due to higher diarrheal rates among older children.

Proper use of antibiotics was found in diagnoses like skin infections, pneumonias, otitis media, and urinary tract infections. Only 8.5% of all common cold diagnoses received antibiotic treatment. According to diagnoses and usual etiologies in this age group, 83.1% of the antibiotics prescribed were inappropriate (29), leading to unnecessary early exposure of children to drugs. The fact that physicians made diagnoses that are rare among infants, like bronchitis and pharyngitis, speaks to their inexperience with children. Statistics of the Ministry of Health confirm that > 93% of pediatric primary care units have only general physicians in these settings (30, 31).

Antimicrobial resistance is a great challenge, and it is related to the high intake of antibiotics, to the use of inappropriate doses, and to the inappropriate choice of an antibiotic for a given infection. Several studies show that recent antibiotic use raises the risk for developing infection or colonization with resistant bacterial pathogens (7, 32, 33). This study shows excessive and inappropriate use of antimicrobials for infections that have mainly viral etiologies, which probably was part of the cause of the high antibiotic resistance found in diarrheagenic Escherichia coli from stool samples in this study (19); the diarrheagenic E. coli as a group showed resistance to ampicillin, cotrimoxazole, tetracycline, and gentamicin. Thirteen percent of strains showed intermediate resistance to nitrofurantoin among diarrheal samples. Multidrug resistance (resistance to three or more antibiotics) was common in diarrheal (63%) and control samples (51%).

Many studies have addressed antibiotic use, but few studies have recorded antibiotic use data within a cohort (24). This cohort study assembled detailed data on antibiotic use during the first year of life of a large number of participants. However, this study is limited because findings cannot be generalized to all children in this periurban community. Even though data were gathered on antibiotic prescriptions outside the study, most treatments were at the study clinic, limiting the study to one clinic with a few physicians. One can only infer that physicians at the study clinic acted similarly to others in the study area. Since the study children clearly had better access to medical care than the average child in this poor setting around Lima, it is impossible to assess how many parents would have purchased an antibiotic if they had to pay for the visit. However, around 50% of the children had free access to state health facilities because of their financial condition and around 13% had free access to insurance health facilities. Medical visits in these settings can cost around $2.00, which is affordable for most residents. Parents may have underreported antibiotic use without a prescription, since no active surveillance at home was performed. Physicians may have reported diagnoses in a biased manner, which would likely lead to a wrong estimation of antibiotic prescribing diagnoses. Moreover, no data were recorded on the advice of pharmacists or relatives for antibiotic use in the medical records of the children studied. Specific information about prescriptions by nondoctors (medical students, pharmacists, and relatives or friends) is also lacking. A complementary investigation in community and primary health facilities is needed to add to this assessment.

The authors thank the study participants and their parents as well as staff at the Instituto de Investigación Nutricional who participated in the cohort study. This study was partially funded by C. Lanata's institutional research funds and by Sanofi Pasteur.