Registration of work-related diseases, injuries, and complaints in Aruba, Bonaire, and Curaçao

OBJECTIVE: To estimate the incidence of work-related diseases, injuries, and complaints in Aruba, Bonaire, and Curaçao and to identify some next steps in the prevention process.
METHODS: All of the three countries' 18 occupational health specialists were asked to participate; 100% agreed to report all work-related diseases, injuries, and complaints in 20042008. A standard online notification form was used to register cases in a database maintained by the Netherlands Center for Occupational Diseases (NCOD). The public health service of Curaçao analyzed the data and presented the results to the participating physicians during educational and feedback meetings.
RESULTS: During the study period, 1 519 cases were reported: 720 (47.0%) work-related diseases; 515 (34.0%) injuries; and 284 (19.0%) complaints. The mean patient age was 42.4 years (range 1670 years); 924 (60.8%) were males and 571 (37.6%), females. Most frequently reported were musculoskeletal diseases, injuries, and complaints; mental health disorders; and skin injuries. Analysis showed incidence rates of work-related diseases, injuries, and complaints in Aruba to be 157 new cases per 100 000 employee years; in Bonaire, 53/100 000; and in Curaçao, 437/100 000.
CONCLUSIONS: These results suggest that labor protection laws need improvement and that preventive action should be fostered. Further study is needed on working conditions, preventive policy, and the quality of occupational health and safety practices in Aruba, Bonaire, and Curaçao. Funding is imperative for collecting and publishing accurate data, which will keep this problem on the social-political agenda.

The Netherlands/Dutch Antilles were part of the Kingdom of The Netherlands. Aruba and Curaçao became independent from The Netherlands in 1986 and 2010, respectively, and as such require their own work-related disease and injury policies. Bonaire on the other hand is a municipality governed by The Netherlands and has been under Dutch law since 2010, but does not have such policies.

The Central Bureau of Statistics (CBS), which uses the Dutch Standard Classification of Businesses (3), registered the following total number of employees in each country: Aruba, 41 878 in 2006; Bonaire, 5 647 in 2008; and Curaçao, 53 779 in 2008. In Aruba, tourism currently provides the largest percentage of the country's income. Other primary industries are oil refining and storage, and offshore banking. Bonaire's economy is mainly based on tourism and salt production. In Curaçao, the main industries are oil refining, tourism, and financial services, with shipping, international trade, and other activities related to Port Willem stad also making a considerable contribution. Table 1 presents the distribution of employees across the economic sectors of the three islands (4, 5). 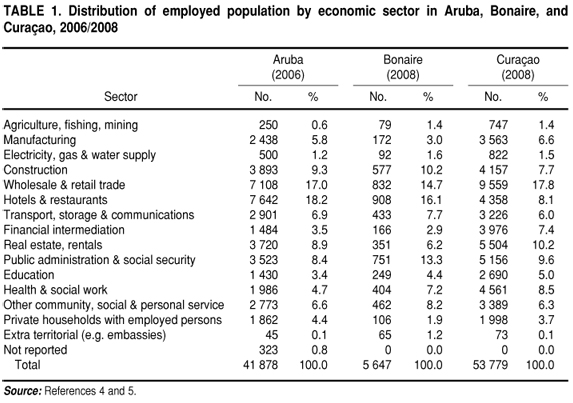 Though they do not have preventive policies, both Aruba and Curaçao have a state decree on occupational diseases (Landsbesluit Beroepsziekten) stipulating that employees can obtain financial compensation for any occupational disease on the official list (6, 7); however, the list is limited. In both countries, physicians within the social security office are responsible for conducting medical evaluations of employees with possible occupational diseases or injuries. Occupational injury insurance is obligatory in Aruba and Curaçao. In 2005, 883 occupational injuries were reported in Curaçao (8). In Curaçao, occupational health services (OHS) are provided by Arbo Consult (Willemstad, Curaçao). The social security office provides sick leave guidance and control. Furthermore, a large oil company has its own internal OHS. Arbo Consult also provides occupational health services to companies in Bonaire. In Aruba, during the study period, OHS were mainly provided by the OHS Center and the social security office. In addition, the Dutch Royal Navy in the Caribbean area has its own OHS, that collaborates with local health services in all three countries.

Vocational training and continuing medical education for occupational physicians in Aruba, Bonaire, and Curaçao are arranged in collaboration with several Dutch educational institutes. Physicians attending these courses indicated that they were encountering many cases of work-related diseases and injuries in daily practice. Therefore, the Netherlands Center for Occupational Diseases (NCOD, Amsterdam, The Netherlands) was asked to contribute to the educational program. Taking into account the area's lack of data on work-related disease and injury, a pilot study was proposed that would report on these within the context of the educational program. In 2004, occupational physicians in Aruba, Bonaire, and Curaçao started the pilot study with the NCOD. Suriname also participated, but its data is not included in this study. The study's objective was to estimate the incidence of work-related diseases, injuries, and complaints in the area, and to identify starting-points for prevention.

The islands' occupational physicians could report the diseases, injuries, and complaints online by visiting a website (www.beroepsziekten.nl) and logging in with a unique password. The NCOD collected and checked the data, and passed it onto the public health center in Curaçao for analysis. The reporting was continuous from January 2004December 2008.

All 18 occupational physicians in Aruba, Bonaire, and Curaçao were asked to participate in the registration study. Information about the study objectives and reporting procedure were provided during training session in Curaçao in 2004. A refresher course and feedback/results were provided in Aruba in 2006. The senior occupational physicians of the OHS and the social security offices were asked to put work-related diseases on the agendas of their regularly-scheduled physician meetings. Twice annually, the NCOD published a newsletter that provided updates on the study's progress to the participating physicians. Occupational physicians could also seek support from the NCOD helpdesk if they encountered difficulties in diagnosing or reporting work-related diseases.

Participating physicians were asked to complete an online notification form when reporting a work-related disease, injury, or complaint. The form included the following items: OHS name and code; physician name and code; notification date; patient file number; patient gender; patient year of birth; patient occupation and economic sector; description of diagnosis and ICD-10 code; causes; pre-existing medical conditions; degree of certainty of diagnosis; occupational health examinations; and medical recommendations, including prescriptions, and referrals to physical therapy and additional services. The decision to report the case or not was up to the participating physician, and if reported, within which of the three categoriesdisease, injury, or complaint.

Notifications were processed in the same way as they are in The Netherlands. According to the Quality Handbook for the Dutch National Registry (9), two steps determine whether or not a notification is justified: first, an automatic filter checks whether or not all required fields have been completed; and second, a quality determination is made by a team comprising two experts in work-related diseases and two staff members from the registration office.

IBM SPSS Statistics software, version 16 (SPSS Inc., an IBM company, Chicago, Illinois, United States) was used to conduct the frequency analysis of work-related diseases, injuries, and complaints. Incidence rates were calculated for work-related diseases, injuries, and complaints at the level of the total workforce of the three islands, and expressed in cases per 100 000 employee-years. The calculations were based on the mean number of cases reported over 5 years and the registered size of the countries' working populations according to CBS (4, 5). 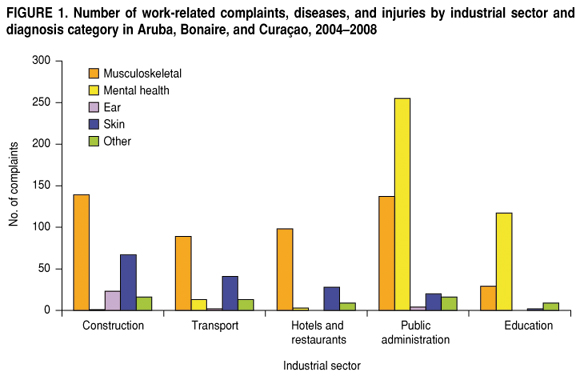 Most cases related to the musculoskeletal system were reported from the construction industry (18.0%) and the government, defense, and social security sector (18.0%). Occupational categories most frequently reported were blue collar jobs in construction, industry, and transport (20.0%); lower-level service jobs (15.0%); and metal workers and mechanics (11.0%). Biomechanical factors were most often reported as the cause (23.0%).

Of the mental health disorders and complaints, the most frequently reported were stress complaints (12.0%) and other reactions to serious stress (8.0%). Mental health disorders and complaints were reported more frequently by females (57.8%, 267 cases) than by males (42.2%, 195 cases); the mean age was 45.1 years (range 2162 years). Most cases of mental health complaints were reported by employees of the following sectors: government, defense, and social security (51.0%); education (25.0%); and health care (9.0%). The most frequently reported occupations were administrative positions (15.0%); personal services and security employees (11.0%); and teachers (11.0%).

Of skin-related issues, the most frequently reported were occupational injuries (84.7%, 166 cases); the remaining were work-related diseases (15.3%, 30 cases). Gender distribution was 80.0% male (155 cases) and 20.0% female (39 cases); the mean age was 40.7 years (range 1667 years). The most frequently reported occupational injury was injury of the hand. Of the work-related diseases, 50% were contact dermatitis. Diseases and injuries of the skin were most frequent among the construction (29.0%) and water transportation (18.0%) sectors. The more frequently reported occupational categories were blue collar workers in construction, manufacturing, and transportation (36.0%); lower-level service jobs (14.0%); and metal workers and mechanics (13.0%).

The aim of this study was to estimate the number of work-related diseases, injuries, and complaints in Aruba, Bonaire, and Curaçao and to identify starting points for prevention. During the 5-year period from 20042008, 18 occupational physicians reported 1 519 cases of which musculoskeletal diseases, complaints and injuries; mental health disorders; and injuries of the skin were reported most frequently. The study also provided work-related disease and injury profiles for the various sectors, data that may inform preventive policy.

Prior to this study, there were no figures available on work-related diseases in the Netherlands Antilles; figures on injuries were available only from insurance companies. A strength of this study was the participation of all of the islands' occupational and insurance physicians. Most of these physicians also participated in the educational meetings. The involvement of the Netherlands Center for Occupational Diseases, which has extensive experience with work-related disease registration and research, was another of this study's strong points (10). Furthermore, regular updates were provided to the participants through a periodic newsletter and consultation of the NCOD helpdesk was encouraged.

The study also had some limitations. Underreporting and selective reporting were at times apparent. After educational meetings, there were peaks in reporting; and some physicians were more active in reporting than others. Also, incidence rates could not be calculated for the various economic sectors because the registered sector names and codes did not always match those defined by CBS. Furthermore, it was not possible to directly calculate estimated incidence ratesthe mean of the annually reported cases for a 5-year period was used as the numerator, and a 1-year period of recorded workers as denominator. Since workforce data is not periodically updated, the denominator was determined using the most recent figures available; in Aruba's case, that was 2006. The decision to use the mean annual number of cases in the numerator was based on the observation that the reported number of cases fluctuated over the years. Therefore, in the authors' opinions, the mean annual numbers of cases in the study period are the best indicators for the calculation of incidence rates. Lastly, registration was based only on the reporting physician's clinical diagnosis, whereas in some cases, such as exposure to chemicals or toxins, laboratory testing is required.

The results of the work-related disease, injury, and complaint registration process have been presented to and discussed with the participating physicians. The next step would be to share these results with policymakers, employers, and employee-representatives in these countries in order to put prevention efforts on the political agenda. The study results suggest that labor protection legislation needs improvement and that preventive action should be fostered. Further study is needed on working conditions, preventive policy, and the quality of occupational health and safety practices in Aruba, Bonaire, and Curaçao.

Funding is imperative for continuing to register new cases, and for making improvements to the current process. Given that the reliability of the data in the present study was limited, a prerequisite to prevention and policy efforts is quality improvement of the registration system (17). Regularly published, accurate figures on work-related diseases, complaints, and injuries will keep this problem on the social-political agenda, and improve the probability of introducing effective work-related disease and injury prevention.

Acknowledgements. The authors are grateful to Stephen Cabenda and Glenn John Smith of Arbo Consult (Willemstad, Curaçao) and Mrs. Ans van Vught of Sociale Verzekeringsbank for their comments on the manuscript. We also wish to recognize and thank the participating physicians for their collaboration and contribution to this study.

12. Netherlands Center for Occupational Diseases. Beroepsziekten in cijfers 2010 (Occupational diseases in figures, 2010). Amsterdam: NCOD: 2010 (In Dutch, with an English summary).

17. Spreeuwers D. Registries of occupational diseases and their use for preventive policy. Amsterdam; Ponsen & Looijen BV; 2008.