OBJECTIVE: To determine the relative contribution of known high-risk human papillomavirus (HPV) genotypes to the occurrence of cervical cancers in Trinidad.
METHODS: The distribution of HPV genotypes in cases of invasive cervical squamous cell carcinoma in Trinidad was investigated. This study was a follow-up to an investigation of HPV genotypes in 310 nonsymptomatic women in Trinidad. The latter study showed that cervical HPV prevalence and heterogeneity of genotypes were high in the study population; notably, the genotypes targeted by the available HPV prophylactic vaccines were not the most common types.
RESULTS: The current study of 85 cases of invasive cervical squamous cell carcinomas demonstrated that the previously observed heterogeneity in HPV genotype distribution is lost in cases of invasive cervical cancer, with the vaccine-targeted HPV types HPV 16 and HPV 18 becoming the most prevalent.
CONCLUSIONS: HPV 16 and HPV 18 were the primary HPV genotypes associated with cases of invasive squamous cell carcinoma in the current Trinidad study. This strong association leads us to conclude that the HPV vaccines targeting HPV 16 and HPV 18 may contribute to reducing the cervical cancer burden in Trinidad.

Cervical cancer is the second most common cancer in women in Trinidad and Tobago, with a high mortality rate among those affected (1). The human papillomavirus (HPV) is the central causal factor in at least 95% of invasive cervical cancers (2), with at least 25 genotypes of the virus having been linked to cancer of the cervix (3). Two prophylactic HPV vaccines are currently available, both of which are effective against high-risk HPV genotypes HPV 16 and HPV 18 (4). These genotypes have been reported to be the most common HPV genotypes found associated with carcinoma in situ and invasive cervical carcinoma (5, 6).

Given the observed marked heterogeneity of high-risk HPV genotypes in the latter study, this investigation was undertaken to determine the relative contribution of the known high-risk HPV genotypes to the occurrence of cervical cancers in Trinidad. Such information will serve to establish the usefulness of incorporating HPV vaccination as a public health intervention for reducing the incidence of cervical cancer in this population. Ethical approval for the study was obtained from the Trinidad and Tobago Ministry of Health.

A total of 85 formalin-fixed, paraffin-embedded tissue specimens of invasive cervical squamous cell carcinoma were obtained from public health institutions in Trinidad and from a local private gynecologic practice. The specimens represented archival material collected over the period 2006 to 2012.

A thin slice of tissue was removed from each tissue block with a disposable scalpel and was used for DNA extraction by treatment with ionic detergents and proteinase K. A 65-base-pair fragment of the HPV L1 gene was amplified using the SPF1/SPF2 consensus primer set according to Kleter et al. (8). It is notable that nested polymerase chain reaction amplification of HPV DNA with the commonly used PGMY (first round) and GP5+/GP6+ (second round) primer sets (9, 10) was not successful for these tissue samples, probably because the DNA was degraded as a result of harsh tissue fixing conditions (90% formalin).

Amplicons from the SPF1/SPF2 polymerase chain reactions were cloned by TOPO® TA cloning (Invitrogen Life Technologies, Grand Island, New York, United States of America) according to the manufacturer's instructions. Both strands of the cloned amplicon were sequenced by automated DNA sequencing using vector primers M13F and M13R at the DNA Core Facility of the National Microbiology Laboratory, Public Health Agency of Canada (Winnipeg, Manitoba). The DNA sequences were aligned against the GenBank database using the BLAST algorithm (National Center for Biotechnology Information, National Library of Medicine, Bethesda, Maryland, United States). HPV genotype assignment was made if > 90% identity was found.

HPV DNA was successfully amplified from 78 (91.8%) of the 85 specimens tested. A definite HPV genotype could be determined for 56 (71.8%) of the HPV-positive specimens (Table 1), with the other 22 (28.2%) recorded as having an indeterminate HPV genotype. The latter represent cases in which the BLAST search proposed more than one equally likely genotype or in which the genotype was determined from a short sequence read (< 60 base pairs). 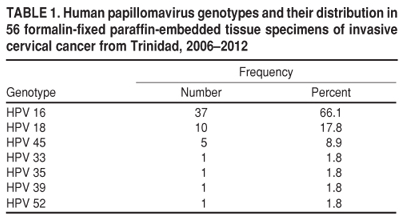 In this study, HPV 16 and HPV 18 together were associated with 83.9% of the cases of invasive cervical cancers analyzed. This amount differs significantly from the findings of the previous Trinidad study of women with no previous diagnosis of cervical cancer, in which HPV 16 and HPV 18 together accounted for only 18.2% of all HPV infections and for 24% of all high-risk infections (7). Only a subset (7 of 16) of the high-risk HPV genotypes detected in the previous study were found to be associated with the cases of invasive cervical cancer analyzed in this study.

The findings of this study are consistent with other reports (5, 6, 1315), which have demonstrated that, in spite of marked heterogeneity in high-risk HPV genotypes among the general population, two high-risk genotypesHPV 16 and HPV 18are by far the most frequently associated with cases of invasive cervical cancers. The findings also support suggestions that these two high-risk genotypes have an advantage for persistence and progression to cervical lesions compared with other high-risk HPV genotypes. HPV 45, which was the third most prevalent genotype in this study, has also been reported to have a biological advantage for progression (16) and 6 out of 7 of the HPV genotypes detected in this study are included in the list of 8 HPV genotypes previously reported to account for 95% of squamous cell carcinomas in pooled data from 11 case-controlled studies (5).

The major limitation to this study was the limited availability of specimens and accompanying demographic data. The specimens used were formalin-fixed, paraffin-embedded tissue samples of invasive cervical squamous cell carcinoma, which were originally prepared for histologic diagnoses and stored as archival patient specimens at two public hospitals and one private gynecologic practice in Trinidad. The original histology slides, from which the original diagnoses were made, were reviewed by the study team's expert pathologist to confirm invasive cervical carcinoma. Apart from date of birth, no other significant demographic data on patients were available.

All specimens that could be located and verified for invasive cervical squamous cell carcinoma for the period 2006 to February 2012 were used in the study. Because of the poor state of the tissue archives, only 85 useable specimens were obtained. This number is small compared with the total expected number of cases of cervical cancer for the period surveyed. An average of 123 new cases of cervical cancer are expected per year in Trinidad and Tobago (calculated from data on newly reported cases of cervical cancer for the period January 2000 to December 2006, obtained from the National Cancer Registry of Trinidad and Tobago, Wayne Mohammed, personal communication, July 23, 2010). Nevertheless, the number of specimens used in this study is comparable to the number of high-risk HPV infections detected in the previous Trinidad study of nonsymptomatic women (83 of 310), and a comparison of the high-risk HPV genotype profiles of both study populations is, therefore, thought to be valid. As with the previous Trinidad study, the current study population is not representative of the general population. Given the difficulty in obtaining archival tissue samples, an investigation that is representative of the population would be best conducted through a prospective study.

The combined frequency of association of 83.9% for HPV 16 and HPV 18 with cases of invasive cervical carcinoma observed in this study is higher than the worldwide average of 70% to 76% (11). Therefore, it is concluded that the HPV vaccines targeting HPV 16 and HPV 18 may contribute to reducing the cervical cancer burden in Trinidad.

Acknowledgments. The authors thank the staff of the Eric Williams Medical Sciences Complex and The San Fernando General Hospital for their cooperation during specimen collection. The authors are grateful to consultant gynecologist Anthony Pottinger for contributing specimens for the study.

Funding. The study was funded through a Campus Research and Publication Grant from the University of the West Indies, St. Augustine, Trinidad.

Conflict of interests. None.

Manuscript received on 16 May 2012.
Revised version accepted for publication on 26 December 2012.