OBJECTIVE: To determine the genetic relationship between Streptococcus pneumoniae serotype 1 Colombian isolates recovered from invasive disease between 1994 and 2011 and recognized serotype 1 international clones.
METHODS: A total of 135 S. pneumoniae serotype 1 isolates with epidemiological and antimicrobial susceptibility data (Clinical and Laboratory Standards Institute, 2012) were studied. The genetic relationship with recognized international clones was established by pulsed-field gel electrophoresis (PFGE) with SmaI restriction enzyme. Multilocus sequence typing (MLST) was standardized to determine the sequence type (ST) in seven isolates representing different clonal groups. Control and reference strain R6, and clones Sweden1 ST217, Sweden1 ST304, Sweden1 ST306, and USA1 ST615, were used.
RESULTS: PFGE revealed that 89.7% of the isolates were associated with Sweden1 ST306, 3.7% were associated with Sweden1 ST304, and 6.6% were not clonally related. Using MLST, ST306 was confirmed in six isolates and ST304 in one.
CONCLUSIONS: In contrast to Brazil and the United States, where clones Sweden1 ST304 and ST227 prevail, invasive disease caused by S. pneumoniae serotype 1 in Colombia is principally associated with the dispersion of isolates related to clone Sweden1 ST306.

Streptococcus pneumoniae is a leading cause of pneumonia, otitis media, bacteremia, and meningitis worldwide (1). Based on structural differences in its capsular polysaccharides, more than 93 pneumococcal types have been identified (24). Some serotypes are more frequently associated with invasive disease while others are related to nasopharyngeal carriage (5).

S. pneumoniae serotype 1 is a major cause of invasive disease in children and adults in many Latin American countries (6). This serotype is associated with complicated pneumonia, pulmonary empyema, peritonitis, and salpingitis (79); it causes outbreaks of disease in small or closed communities (1013) and has been identified as the cause of a lethal pneumococcal meningitis epidemic (14).

Molecular typing studies of serotype 1 (mostly the penicillin-susceptible type) have shown low genetic diversity among the isolates, which has been associated with the short duration of its nasopharyngeal colonization and its propensity to cause an invasive infection (15). Different molecular techniques such as pulsed-field gel electrophoresis (PFGE) and multilocus sequence typing (MLST) have been used to identify clonal groups of S. pneumoniae serotype 1 and have demonstrated its establishment and dissemination in different regions of the world (16).

The aim of this study was to determine the clonal distribution of S. pneumoniae serotype 1 Colombian isolates recovered from invasive disease between 1994 and 2011 by establishing their genetic relationship with recognized international clones.

This research consisted of a descriptive study indicating the molecular characteristics of invasive isolates of S. pnuemoniae serotype 1 in Colombia between 1994 and 2011.

Out of 479 isolates of S. pneumoniae serotype 1 recovered between 1994 and 2011, obtained from national surveillance in Colombia and sent to the Microbiology Study Group (Grupo de Microbiología) at the Instituto Nacional de Salud in Bogotá, a representative sample of 135 isolates was selected for study. The inclusion criteria were available data on epidemiology, and antimicrobial susceptibility to penicillin, ceftriaxone, vancomycin, erythromycin, tetracycline, chloramphenicol, and trimethoprim-sulfamethoxazole (SXT), which was determined by the disk diffusion method (Kirby-Bauer) and broth microdilution, according to the standards of the Clinical and Laboratory Standards Institute (CLSI; 2012) (19, 20).

The representative sample size was calculated based on an assumed prevalence of clonal isolates of 50%, with an absolute error of 10% and 95% confidence intervals (CIs). The data analysis was conducted using Epi Info™ software version 6.1 (Centers for Disease Control and Prevention, Atlanta, USA). A sample of 121 isolates susceptible to antibiotics used clinically was selected at random and per study year; 14 isolates with resistance to some antimicrobials were also included.

PFGE was carried out according to the protocol of Vela et al. (21), using the control and reference strain R6 (donated by Alexander Tomasz of The Rockefeller University, New York, USA), and the clones Sweden1 ST217, Sweden1 ST306, Sweden1 ST304, and USA1 ST615 (donated by the National Centre for Streptococcus (NCS) in Alberta, Canada, and the Instituto Adolfo Lutz in São Paulo, Brazil). The band patterns of each isolate obtained by PFGE were classified according to Tenover's criteria (22) and analyzed with Bionumerics Gel-Compare (Applied Maths, Austin, TX, 19982005).

The sequence type (ST) was determined in seven isolates representing different clonal groups. MLST was performed according to the protocol of Enright et al. (23), with changes in the concentrations of magnesium chloride (MgCl2) (3.6 nM) and DNA (200 ng/µl). The DNA fragments were purified using QIAquick Gel Extraction Kit (Qiagen, Valencia, CA, USA) and were sequenced in each direction, using the primers used for amplification, on an ABI PRISM® 310 automatic sequencer (Applied Biosystems, Cheshire, UK). Software available on the MLST website (http://www.mlst.net/) was used to analyze genetic profiles (24).

A descriptive analysis of the results was performed. Variables were described using relative frequencies or absolute frequencies, depending on their level of measurement. Data were consigned and verified with Epi Info™ version 6.1 (25).

Among the 135 isolates of S. pneumoniae serotype 1 studied, only two genetic lineages (types E and F) were identified by the PFGE patterns. Type E comprised 121 isolates (89.7%), with 15 subtypes (E1E15) genetically related to the clone Sweden1 ST306. The subtype E1 was observed in 100 of the 135 isolates (74.1%), with a genetic similarity of 98.0%. The subtypes E2E15 were observed in 21 isolates (15.5%), with a genetic similarity between 83.0% and 92.8%. Type F comprised five isolates (3.7%; 5/135) genetically related to the clone Sweden1 ST304, with a genetic similarity between 82.8% and 92.8%. Nine (6.6%) of the remaining isolates were not clonally related. MLST confirmed the clonal relationship initially identified by PFGE in six isolates related to Sweden1 ST306 and in one related to Sweden1 ST304. In these isolates neither single nor double locus variants were observed, and MLST did not provide additional information for differentiating isolates within a clonal group based on differences in electrophoretic patterns (Figure 1). 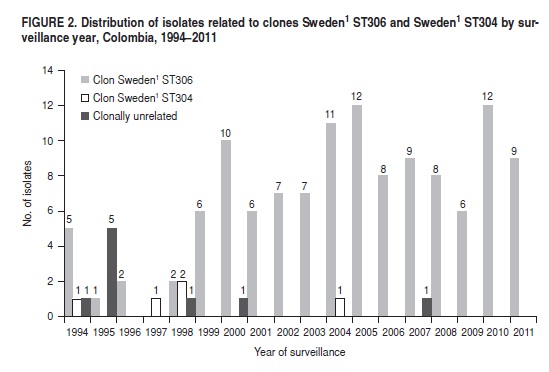 Laboratory-based surveillance for invasive pneumococcal disease has been carried out in Colombia since 1994, through the national surveillance program conducted by the Microbiology group of the National Institute of Health in Bogotá (part of the SIREVA II project coordinated by the Pan American Health Organization (PAHO)). This type of surveillance has identified the frequency of serotypes, resistance to antibiotics, and movement of international clones in Colombia and other Latin American countries (26).

Previous studies in Colombia have established the presence and dispersion of non-penicillin-susceptible clones of S. pneumoniae (Spain9V ST156, with capsular variant 14; Spain6B ST90; Spain 23F ST81; and Colombia23F ST338 (21)), and clone Colombia5 ST289, which is penicillin-susceptible but resistant to tetracycline and chloramphenicol (2729). This study determined the establishment of clone Sweden1 ST306, associated with invasive disease (mostly pneumonia). The allelic profile and ST of isolates characterized by MLST were included in the MLST website's centralized database (http://spneumoniae.mlst.net/earth/maps/). The MLST website provides data that can be transmitted electronically via the Internet, allowing for more adequate surveillance worldwide (24).

In a study conducted among children in 10 Latin American countries between 2000 and 2005, S. pneumoniae serotype 1 ranked third in frequency (7.5%) primarily associated with pneumonia, with a 3% reduction in susceptibility to penicillin, and additional variations were detected in the prevalence of this serotype, with increases at the beginning and end of the study period, revealing a cyclic pattern, in Argentina, Chile, Colombia, and Uruguay (6). To date, Colombia is the only Latin American country where the presence and dispersion of isolates related to clone Sweden1 ST306 (30, 31) has been determined. This clonal group, which is fully susceptible to antibiotics, was initially identified in Sweden (32) and later found in Canada, Denmark, France, Germany, Netherlands, Norway, Poland, Spain, and the United States, and is always associated with invasive disease (16). Since the introduction of the heptavalent conjugate vaccine in Portugal and Spain, an increase in this clonal group among healthy carriers and in invasive disease has been reported (33, 34). Some authors have suggested an association between the use of the seven-valent conjugate vaccine and the increase in invasive pneumococcal disease caused by non-vaccine serotypes such as serotype 1 (31, 33, 34).

According to Williams et al., invasive pneumococcal disease caused by S. pneumoniae serotype 1 shows different levels of virulence, which may be attributable to the presence and dispersion of different clonal complexes that are characterized by the presence of genomic regions and polymorphisms associated with specific virulence factors for each clonal complex. For this reason, in countries with dispersion of isolates related to clone Sweden1 ST217 the invasive disease is associated with bacteremia and meningitis with high mortality rates, whereas in countries where the clone Sweden1 ST306 circulates, invasive disease is associated with nonlethal pneumonia with or without empyema.1

The clone Sweden1 ST306 has a worldwide distribution. This may be related to the apparent predominance in Colombia. However, the lack of molecular characterization of isolates of S. pneumoniae serotype 1 in several countries hides actual distribution of this pathogen. In this study, the identification of isolates with resistance to some antibiotics for clinical use genetically related to clone Sweden1 ST306 is of particular concern as it may add a further advantage to such serotype 1 isolates, leading to their emergence in Colombia, where this clone is prevalent.

In this study, the isolates characterized for MLST did not present single- or double-locus variants. This technique does not provide additional information to differentiate isolates within a clonal group with some differences in electrophoretic patterns. For future studies the authors recommend the use of the new methodologies with higher discriminatory power, such as MILST (multi-invasive-locus sequence typing) or MVLST (multi-virulence-locus sequence typing), which allow a better understanding of genetic relationships among strains that appear identical but may have individual characteristics useful for differentiation (36, 37).

In conclusion, the increase of invasive disease caused by S. pneumoniae serotype 1 in Colombia can be attributed to an increased circulation of isolates genetically related to clone Sweden1 ST306. This study also confirmed that continuing surveillance is necessary to detect the emergence of pneumococci serotypes and clones so that appropriate control measures of infections caused by pneumococci can be applied within an appropriate time frame.

Acknowledgments. The authors thank María Luz Gunturiz of the Grupo Fisiología Molecular at the Instituto Nacional de Salud (INS) in Bogotá for sequencing the isolates, and Elizabeth Castañeda and Clara Ines Agudelo for their assistance in the development of the study and the revision of the manuscript.

Funding. Funding was provided by the INS.

Conflicts of interests. None.