First reported enterovirus D68 infection in pediatric patients from the Caribbean region: evidence of spread from the U.S. outbreak

Ministry of Health and the Environment, Roseau, Commonwealth of Dominica

University of the West Indies, St. Augustine, Trinidad and Tobago

The 2014 enterovirus D68 (EV-D68) outbreak in the United States raised concerns about the introduction of the virus in the Caribbean region. The objective of this study was to provide rapid evidence of the introduction of EV-D68 strains in the Caribbean region during the 2014 outbreak in the United States, using a relatively simple phylogenetic approach. From October 2014 to May 2015, four EV-D68 cases from two countries (Bermuda and Dominica) were detected at the regional referral laboratory at the Caribbean Public Health Agency (Port of Spain, Trinidad and Tobago) based on molecular testing of respiratory specimens. All cases were children presenting to hospitals with moderate respiratory distress. No cases of acute flaccid paralysis were detected. Phylogenetic analysis of the Caribbean strains showed more than 99% similarity with the 2014 U.S.-outbreak strain, providing evidence of the introduction and circulation of the virus in the region.

Surveillance for EV-D68 in the Caribbean

The recent increase in the number of cases prompted the referral laboratory at the Caribbean Public Health Agency (CARPHA) (Port of Spain, Trinidad and Tobago) to implement surveillance for EV-D68 as part of its acute respiratory infection (ARI) sentinel surveillance in the Caribbean region. The laboratory surveillance was carried out to determine the potential introduction and circulation of EV-D68 in the Caribbean region during the 2014 U.S. outbreak. As a part of a routine surveillance program in the English- and Dutch-speaking Caribbean, respiratory specimens (nasopharyngeal swabs and nasopharyngeal aspirates) from patients presenting to health care facilities with influenza-like illness (ILI) or ARI are sent to the regional referral laboratory (CARPHA). Samples are tested for influenza and non-influenza etiology including rhinovirus, parainfluenza, human metapneumonia virus, adenovirus, and respiratory syncytial virus. Since October 2014, samples received in the laboratory that tested negative for influenza were also tested for enterovirus (generic detection) using real-time reverse transcription PCR (RT-PCR). If a positive result was obtained, molecular testing for EV-D68 was performed based on a previously described procedure (77 Nix WA, Oberste MS, Pallansch MA. Sensitive, seminested PCR amplification of VP1 sequences for direct identification of all enterovirus serotypes from original clinical specimens. J Clin Microbiol. 2006;44(8):2698–704.). The objective of the analysis was to provide rapid evidence of the introduction of EV-D68 strains in the Caribbean region during the 2014 outbreak in North America, using this rather simple phylogenetic approach. CARPHA’s research ethics committee authorized the publication of the study.

Evidence and spread in pediatric patients

From a total of 259 samples received between October 2014 and May 2015, 14 samples tested positive using pan-enterovirus RT-PCR. EV-D68 was identified in four clinical specimens from two different countries (Bermuda and Dominica). Because pan-enterovirus RT-PCR can detect all members of the enterovirus genus, the remaining 10 samples were considered probable non-EV-D68 human enterovirus–producing respiratory infections. The specimens that tested positive for EV-D68 were obtained from two patients from Bermuda presenting with severe acute respiratory tract infections (SARIs) in mid-October, and two patients from Dominica presenting with SARIs at the end of November and beginning of December, respectively. The four positive samples had been collected within two days of symptom onset. All samples were negative for the additional respiratory virus panel.

The patients’ medical records were reviewed retrospectively to evaluate clinical manifestations at admission, diagnostics, management, and outcome as well as relevant medical and epidemiological history. Agreement from parents and guardians of the patients was obtained for publication. All patients were hospitalized children under 5 years old and presented at health facility emergency rooms with moderate to severe respiratory illness. Three of the patients reported recent travel. One of the two patients from Dominica had returned from the French overseas territory of Martinique three weeks before admission to the hospital. The two patients from Bermuda reported returning from the United States two and three weeks respectively before presenting to the hospital. No cluster involving family members or schoolmates was reported. History of reactive airway disease was recorded for two patients. Main reported manifestations at admission were difficulty of breathing and tachypnea, irritability, wheezing, and cough. Fever was reported or recorded in only two cases. Patients were diagnosed as presenting with lower respiratory tract infection based on clinical and radiological findings, and all received treatment with bronchodilators and supportive symptomatic treatment. Both patients from Dominica received antibiotics during hospitalization because of initial suspected bacterial etiology, but no positive bacterial cultures were reported. None of the patients required admission to the intensive care unit or required mechanical ventilation during admission. Three of the four patients improved and were discharged within 72 hours of admission. One of the two patients from Dominica, who was 8 months old, remained hospitalized for 10 days diagnosed with community-acquired pneumonia. This patient was eventually discharged on empirical oral antibiotic treatment. A summary of the four patients’ clinical, demographic, and epidemiologic features is shown in Table 1.

Samples were sent to the U.S. Centers for Disease Control and Prevention (CDC) (Atlanta, Georgia). EV-D68 was confirmed in all four clinical samples by real-time RT-PCR (http://www.fda.gov/downloads/MedicalDevices/Safety/EmergencySituations/UCM446784.pdf). Partial sequencing of the 3´ half of the genomic region encoding the viral protein 1 (VP1) domain of the four EV-D68-positive clinical specimens was performed as previously described (77 Nix WA, Oberste MS, Pallansch MA. Sensitive, seminested PCR amplification of VP1 sequences for direct identification of all enterovirus serotypes from original clinical specimens. J Clin Microbiol. 2006;44(8):2698–704., 88 Oberste MS, Nix WA, Maher K, Pallansch MA. Improved molecular identification of enteroviruses by RT-PCR and amplicon sequencing. J Clin Virol. 2003;26(3): 375–7.). Sequences were aligned with published EV-D68 sequences downloaded from GenBank (July 2015) (www.ncbi.nlm.nih.gov/genbank). Phylogenetic analysis was carried out using the neighbor-joining unweighted pair group method with arithmetic mean (UPGMA); maximum likelihood (ML); and minimum evolution constructs (Molecular Evolutionary Genetics Analysis (MEGA) 6.0 software (Center for Evolutionary Medicine and Informatics, The Biodesign Institute, Tempe, Arizona, United States)). As all analysis showed similar results, only the neighbor-joining tree constructed with 1 000 bootstrap replications in the tree ligand is presented here (Figure 1). Study sequences were deposited in the GenBank database under accession numbers KT383470, KT383471, KT383472, and KT383473. Comparison of the study strains and available reference sequences showed that the Bermudian strains were a 100% match and shared > 99% nucleotide identity with the virus circulating in the United States in 2014. The two Dominican strains were also a 100% match and showed 99% nucleotide identity with both the Bermudian strains and the circulating virus from the United States (Figure 1). According to the phylogenetic tree, the four isolates were grouped within the B1 clade (66 Greninger AL, Naccache SN, Messacar K, Clayton A, Yu G, Somasekar S, et al. A novel outbreak enterovirus D68 strain associated with acute flaccid myelitis cases in the USA (2012–14): a retrospective cohort study. Lancet Infect Dis. 2015;15(6): 671–82.), which has been recently related with potential neurological illness. However, none of the cases in the cohort showed neurological manifestations during the six-month post–acute episode follow-up.

As the objective of this study was to provide rapid evidence of the introduction of EV-D68 strains in the Caribbean region during the 2014 outbreak in North America, a rather simple phylogenetic approach was used. Therefore, the phylogenetic analysis had some limitations, including the small number of study strains, the relatively short length of the sequences, and the intrinsic limitations of the tree construction criterion. Other limitations of this study were the retrospective medical assessment and the small number of clinical cases identified. Because EV-D68 epidemiology has developed over a few decades from sporadic cases to worldwide cluster occurrence, strong analysis of the evolutionary status by phylodynamic approach could be invaluable for understanding changes in viral transmission, such as increased infectivity, replication potency, or host immune evasion, as well as for development of vaccines and antiviral treatment strategies.

This phylogenetic analysis provides evidence of the introduction and circulation of EV-D68 in the Caribbean region during the 2014 outbreak in the United States. Genetic analysis of the infections of the four confirmed cases shows the identified strains are strongly related to those reported in the U.S. 2014 outbreak. While the virus has only been detected in two Caribbean countries (Bermuda and Dominica), cases in other countries in the region are likely due to the high volume of travel and trade with North America and other parts of the world. Therefore, appropriate surveillance strategies need to be implemented in the region. Clinicians should consider EV-D68 in the differential diagnosis when patients present with severe acute respiratory illness, especially in infants and children with history of asthma. The importance of maintaining coordinated regional surveillance and awareness is essential for ensuring an adequate public health response.

Authors hold sole responsibility for the views expressed in the manuscript, which may not necessarily reflect the opinion or policy of the Caribbean Public Health Agency (Port of Spain, Trinidad and Tobago); the Ministry of Health, Seniors and Environment of Bermuda (Hamilton); the Ministry of Health and the Environment, Commonwealth of Dominica (Roseau); the RPSP/PAJPH; or the Pan American Health Organization (PAHO).

This is an open-access article distributed under the terms of the Creative Commons Attribution License, which permits unrestricted use, distribution, and reproduction in any medium, provided the original work is properly cited. 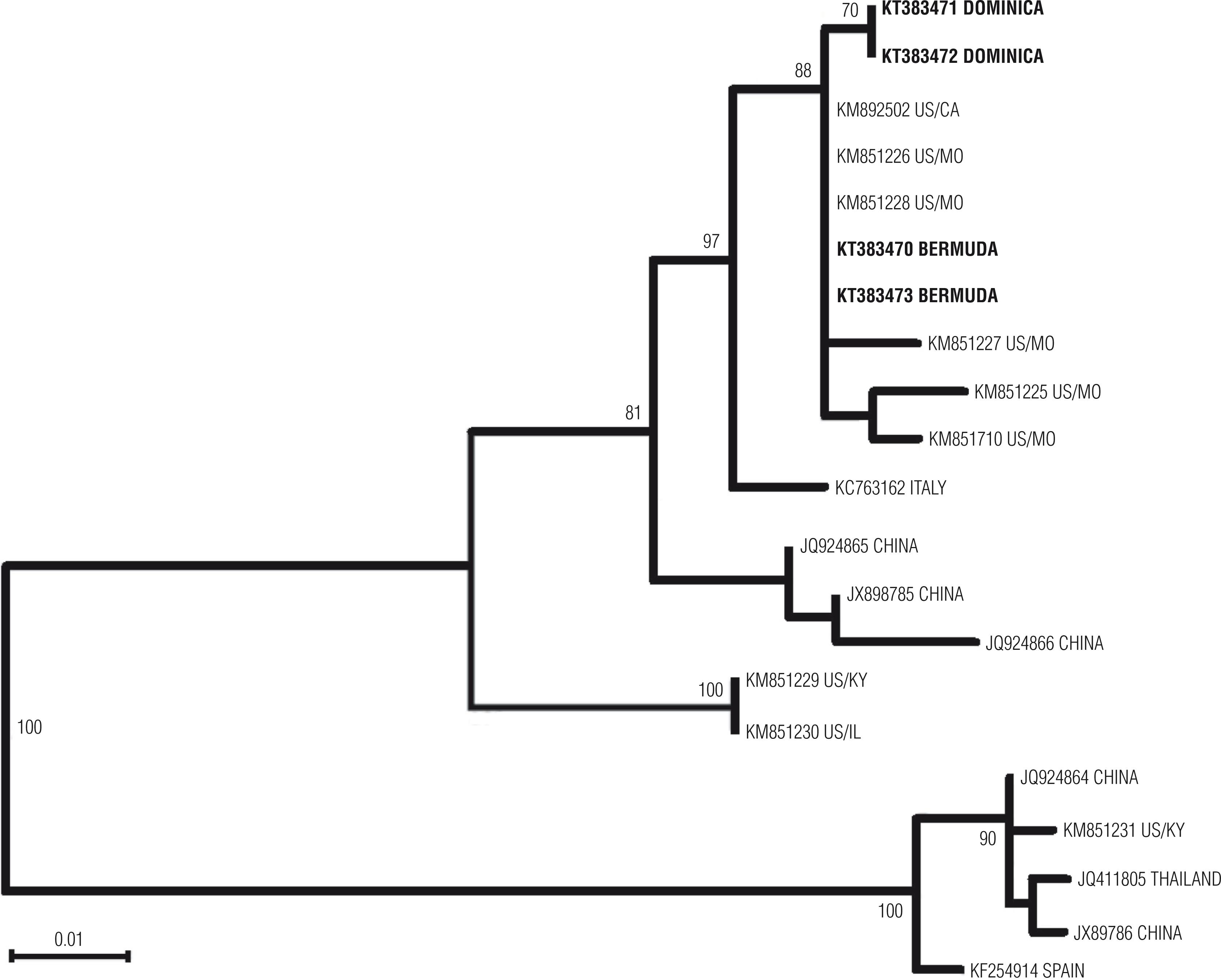