Using evidence-informed policies to tackle overweight and obesity in Chile

Overweight and obesity are a global epidemic with rates having risen to alarming levels in both developed and developing countries. Chile has been no exemption, with sharp increases in obesity prevalence, especially among school-age children. This paper describes the policy actions and strategies implemented to tackle this major public health concern in Chile over the last 10 years, and highlights the main challenges and nuances of the process. Chile has taken policy action that includes front-of-package labelling, advertising regulations, and school-food restrictions. New policies focus on the social determinants of health as they relate to food environments and people's behavior. These actions are not only suitable to the current context in Chile, but are also supported by the best available scientific evidence. Moreover, the implementation of these policies has produced a broad debate involving public institutions and the food industry, with discussions issues ranging from property rights to trade barriers. Despite some differences among stakeholders, a valuable political consensus has been achieved, and several international organizations are eager to evaluate the impact of these pioneer initiatives in Latin America.

The overweight and obesity epidemic is threatening the developed as much as the developing world (22. Popkin BM, Adair LS, Ng SW. Global nutrition transition and the pandemic of obesity in developing countries. Nutr Rev. 2012;70(1):3–21.). In countries that pertain to the Organization for Economic Cooperation and Development (OECD), estimates show that 1 in 5 children are either overweight or obese and 18% of adults are obese (33. Organization for Economic Co-operation and Development (OECD). Obesity update. 2014. Available from: www.oecd.org/els/health-systems/Obesity-Up-date-2014.pdf Accessed 17 August 2016.
www.oecd.org/els/health-systems/Obesity-... ). In Latin American countries, 20% – 25% of the population under 19 years of age (more than 25 million children and 15 million adolescents) are either overweight or obese (44. Rivera JÁ, de Cossío TG, Pedraza LS, Aburto TC, Sánchez TG, Martorell R. Childhood and adolescent overweight and obesity in Latin America: a systematic review. Lancet Diabetes Endocrinol. 2014;2(4):321–32.) and almost 1 in 4 adults are obese (55. Schargrodsky H, Hernández-Hernández R, Champagne BM, Silva H, Vinueza R, Silva Ayçaguer LC, et al. CARMELA: Assessment of cardiovascular risk in seven Latin American cities. Am J Med. 2008;121(1):58–65.).

An additional concern regarding the overweight and obesity epidemic in Chile is its unequal distribution. Obesity prevalence among people with a lower level of education almost doubles its prevalence, compared to those with the highest level of education. Moreover, the unequal distribution is also observed by genre, with a greater proportion of women affected in low and medium educational level, as shown in Figure 1 (66. Ministerio de Salud. Encuesta Nacional de Salud Chile 2009-2010. Available from: Ministerio de Salud. Encuesta Nacional de Salud Chile 2016-2017. http://epi.minsal.cl/en-cuesta-ens/ Accessed 08 January 2018.
http://epi.minsal.cl/en-cuesta-ens/... ).

This article aims to present different strategies implemented in Chile to reduce overweight and obesity during the last 10 years, discussing the main challenges and barriers observed during the implementation of several policy actions, especially over the last 4 years.

EVIDENCE TO SUPPORT THE IMPLEMENTATION OF NUTRITIONAL POLICIES

It is well demonstrated that one of the leading causes of overweight and obesity is the high availability of low-nutritional and high caloric content food (99. Sassi F. Obesity and the economics of prevention. Cheltenham Glos, United Kingdom: Edward Elgar Publishing; 2010.). Moreover, intake of this type of food is directly related to an increase in weight (1010. Mozaffarian D, Hao T, Rimm EB, Willett WC, Hu FB. Changes in diet and lifestyle and long-term weight gain in women and men. N Engl J Med. 2011;364(25):2392–404.).

Likewise, interventions aiming at modifying food environments, such as those in schools, are effective in reducing overweight and obesity in children. Evidence shows that food environments can have a strong influence on the schoolaged population; therefore, interventions at schools could change food preferences, as well as body mass index (BMI) in children (1616. Osei-Assibey G, Dick S, Macdiarmid J, Semple S, Reilly JJ, Ellaway A, et al. The influence of the food environment on overweight and obesity in young children: a systematic review. BMJ Open. 2012;2(6): e001538.).

Finally, it is worth highlighting the experience of Mexico, where the prevalence of obesity in 2012 was estimated at 32.7% (2121. Instituto Nacional de Salud Pública. Encuesta Nacional de Salud y Nutrición, 2012. Available from: http://ensanut.insp.mx/ Accessed 6 May 2016
http://ensanut.insp.mx/... ), surpassed only by the United States of the OECD countries (33. Organization for Economic Co-operation and Development (OECD). Obesity update. 2014. Available from: www.oecd.org/els/health-systems/Obesity-Up-date-2014.pdf Accessed 17 August 2016.
www.oecd.org/els/health-systems/Obesity-... ). As a response to this condition, the Government of Mexico implemented one of the most comprehensives strategies to tackle overweight and obesity. The plan included several measures, such as taxing sugary drinks and high-calorie foods. A big impact of these policies has been anticipated mainly from changing consumption among the population (2222. Astudillo O. Country in focus: Mexico's growing obesity problem. Lancet Diabetes Endocrinol. 2014;2(1):15–6.).

As the overweight and obesity epidemic is a mayor national public health concern, the Ministry of Health (MoH) of Chile has taken policy actions to control it. Actions carried out focus on two main areas: the social determinants of health related to food environments, and people's behavior. These actions aim at reducing unhealthy food consumption as much as increasing healthy food consumption.

In 2012, a new regulation (Law 20606) was passed to incorporate a FOP labelling system. This law mandates that foods that exceed certain levels of energy, sugars, sodium, or saturated fatty acids—defined by the MoH—must carry a symbol that warns the potential consumers about its content. Foods that are to be labeled with this symbol are forbidden to be sold in schools and their advertising is strongly restricted.

Once Law 20606 was passed, the MoH had to establish specific levels of energy, sugars, sodium, or saturated fatty acids, and the characteristics of the symbols to be used—a black octagon (stop sign) as shown in Figure 2. In 2014, important changes were introduced to this regulation to include several unhealthy products that had been excluded previously. In addition, limits used to label a food as unhealthy were adjusted to better impact food environments. Finally, the regulation was made available for public opinion and feedback and took its current form (Box 1).

These three interventions—FOP labelling, advertising regulations, and school food sales restrictions—follow international recommendations for improving population's nutritional habits (2323. Consumers International. Recommendations for an international code on marketing of foods and non-alcoholic beverages to children. Rationale for developing a set of recommendations, 2008. Available from: www.worldobesity.org/site_media/uploads/ConsumersInternationalMarketingCode.pdf Accessed 17 August 2016.
www.worldobesity.org/site_media/uploads/... , 2424. World Health Organization. Prevention and control of noncommunicable diseases: implementation of the global strategy report by the Secretariat. Proceedings of the 61st World Health Assembly, 2010. Available from: http://apps.who.int/gb/eb-wha/pdf_files/A61/A61_8-en.pdf?ua=1 Accessed 17 August 2016.
http://apps.who.int/gb/eb-wha/pdf_files/... ). However, they have been broadly criticized by the food industry that claims these interventions increase consumer barriers to choice and restrict consumer rights. The regulation's opponents also claim that it interferes with property rights (by restricting industry brands and logos), creates trade barriers, and eliminates the possibility of comparing products, since “all food would be marked as unhealthy.” However, the General Comptroller Office of the Republic of Chile, which is charged with assessing the legality of every government act, has approved every element of this regulation, only introducing small changes to modify the FOP text label from “excess of (nutrient X)” to “high levels of (nutrient X).” Also, many government officials and representatives of civil society have been strong supporters of these changes, providing the necessary political and social backing. The legal process was completed in 2015, but the law's mandatory implementation phase did not begin until July 2016, giving the food industry ample time to prepare.

It is important to mention that this policy is being implemented gradually. The cut-off points listed here will not be used until 2019, following incremental increases from 2016 – 2019. This gradual implementation aims to give the food industry time to develop the technology needed to reduce the content of critical nutrients in their products.

Before the implementation of this law, every Member State of the World Trade Organization was notified through its official contact points, in order to ensure a public consultation for this regulation. More than 3 000 suggestions, observations, and opinions were received, from approximately 350 institutions and individuals. Opinions included declarations supporting this regulation, and suggestions to change or modify different parts of the policy. The regulation was modified based on this public consultation. One of the main observations that was incorporated after the consultation, was the progressive implementation, mentioned above.

Concurrently, public programs have been implemented to promote healthy lifestyles. These programs aim to change people's behaviors through individual and structural actions taking into account the geography of where they live. For example, the Vida Chile (Chile Life) program was started 10 years ago to improve people's eating and physical activity habits through social communication strategies. Later, the Government launched a program called Estrategia Global contra la Obesidad (the Global Strategy against Obesity), which included legislative and regulatory components; and the program Elige Vivir Sano en Comunidad (Choose to Live Healthy in the Community) to encourage people to choose healthy food, increase healthy activities in their communities, and recognize the social and geographic element of these choices. Finally, the program Estrategia Municipios, Comunas y Comunidades Saludables (Healthy Municipalities, Communes, and Communities Strategy) recognizes local governments as a strategic actor that can create political and strategic conditions that facilitate healthier environments and opportunities for life, valuing the identity of each territory and promoting in its inhabitants a greater level of activity and empowerment regarding their quality of life and well-being. This is also supported by available evidence, showing that behavioral interventions for preventing and treating obesity can have a positive effect on BMI indexes, although impact on physical activity is still unclear (2525. Sharma M. Behavioural interventions for preventing and treating obesity in adults. Obes Rev. 2007;8(5):441–9.).

Finally, as a complement to the interventions mentioned previously, the MoH implemented a new fiscal measure to tax sugar-sweetened beverages. This policy aims to reduce sugar consumption in children in order to reduce obesity prevalence in this population group. In addition, a new taxation system for solid food, based on its sugar content, is being explored. This would be a pioneer initiative in Latin America, given that, to date, only Denmark, Finland, and Hungary have such a measure (2626. Mytton OT, Clarke D, Rayner M. Taxing unhealthy food and drinks to improve health. BMJ. 2012;344(2):e2931.).

Chile is addressing overweight and obesity issues with several policy measures that are strongly supported by scientific evidence. Despite some disagreements with private industry and other political actors, there has been a dialogue and attitude toward reaching social and political consensus in the context of general welfare and evidence-in-formed policymaking. The support of key political and civil society stakeholders has been of great importance.

The development of several regulatory interventions addressing social determinants of health and modifying food environments are expected to have a big impact on overweight and obesity. Despite the challenges that will be faced during implementation of Law 20606, evaluation of its nutritional policies would improve understanding of their local impact, augmenting the body of evidence available for decisionmaking. This is particularly important, since most of the evidence presented here is from international studies and may not be completely applicable to the Chilean context.

Finally, although overweight and obesity are well recognized as urgent, global problem, efforts made by single countries are still insufficient, especially among low- and middle-income countries. It is important to collaborate with other nations addressing similar issues, since overweight and obesity are a global concern and joint efforts are more effective than single ones.

This is an open access article distributed under the terms of the Creative Commons Attribution-NonCommercial-NoDerivs 3.0 IGO License, which permits use, distribution, and reproduction in any medium, provided the original work is properly cited. No modifications or commercial use of this article are permitted. In any reproduction of this article there should not be any suggestion that PAHO or this article endorse any specific organization or products. The use of the PAHO logo is not permitted. This notice should be preserved along with the article's original URL.

FIGURE 1   Prevalence of obesity by gender and educational level, Chile, 2017 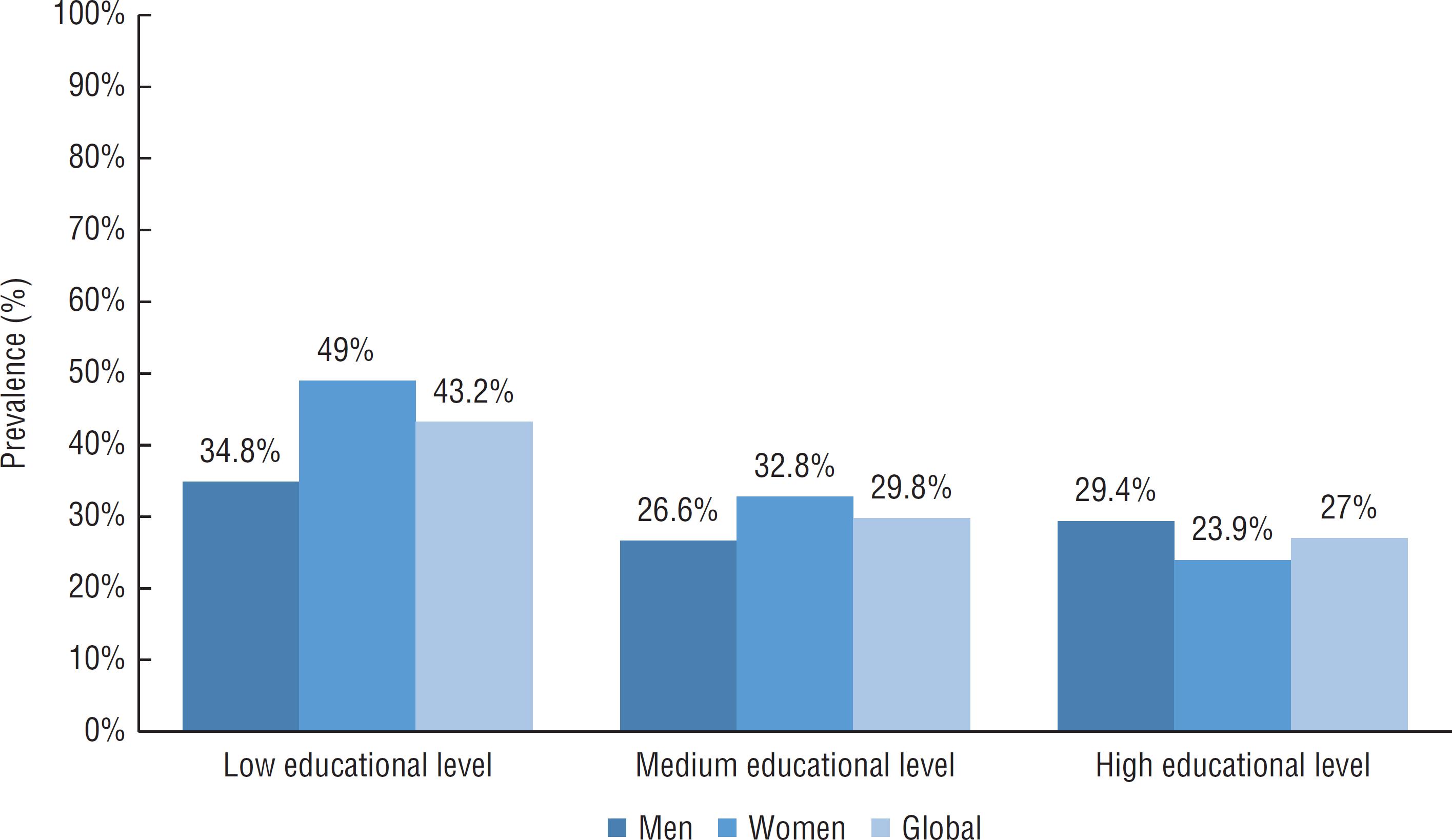 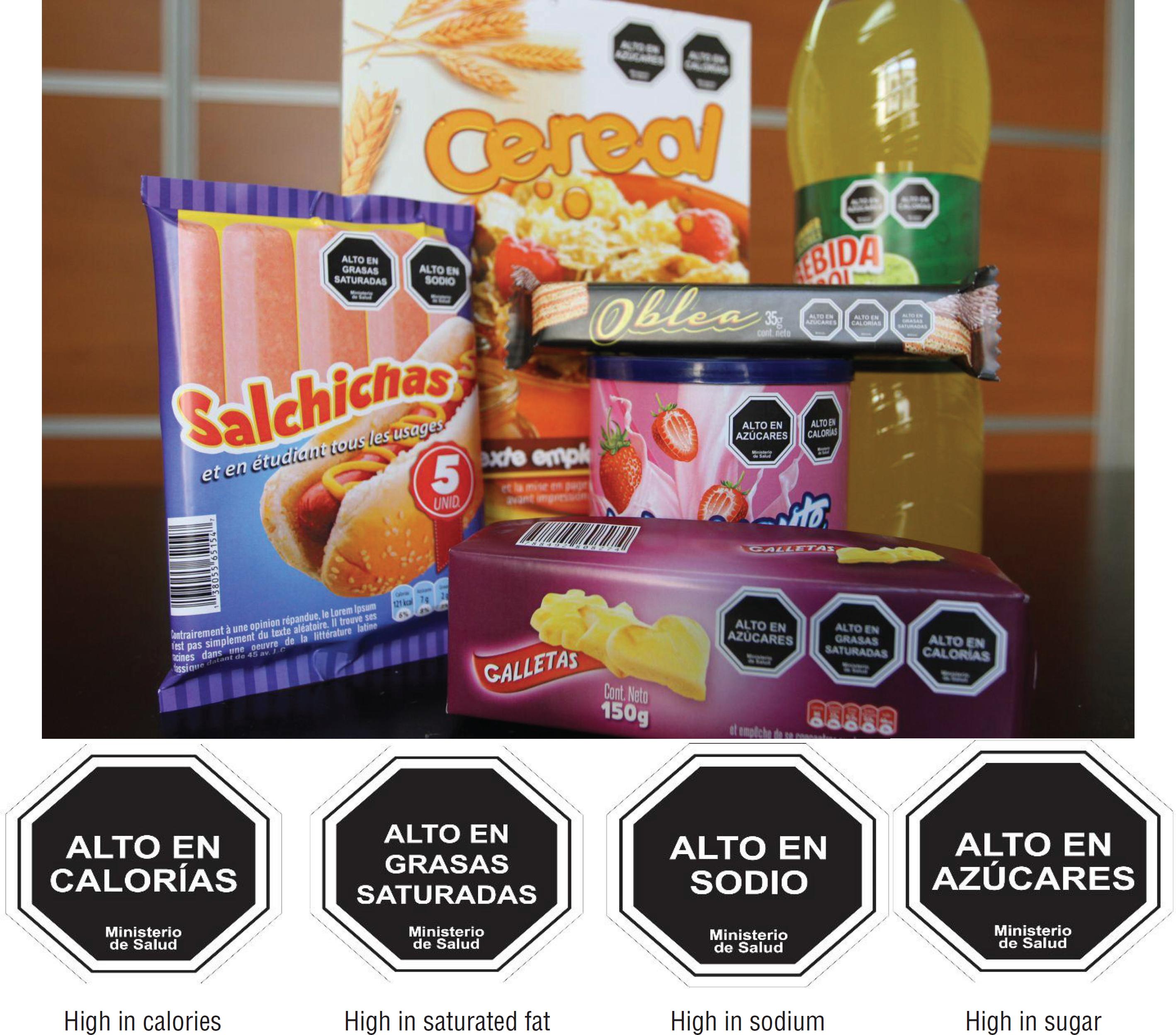