Remembering Alma-Ata: challenges and innovations in primary health care in a middle-income city in Latin America

The year 2018 is an opportune time to explore health system reforms and primary health care (PHC) in Brazil, given the anniversaries of the Alma-Ata Declaration (40 years) and of the Constitution of Brazil (30 years), the basis of the Unified Health System (SUS). In this context, health system analysis in the municipal setting is an important instrument for acknowledging achievements and innovations, as well as weaknesses and threats. Due to the principle of decentralization of SUS, municipalities have assumed a leadership role in health policy development and implementation. The cities also come first in expressing the failures of the health system and the consequences of austerity measures. Thus, analysis of health system transformations at the municipal level are fundamental to studying PHC achievements and gaps.

This report identifies the challenges and innovations of PHC implementation in Curitiba, beginning with a brief history of the city's health system development. The city was a pioneer in linking urban planning with health system design, improving access to health care, and obtaining better health outcomes over the past 30 years. This report covers those years, as well as the challenges and strategies implemented during the most recent political cycle (2013 – 2016). There are substantial lessons that can be garnered from the experience of this middle-income city in Latin America, lessons that may be useful as the region moves toward the Sustainable Development Goal of Universal Health Coverage by 2030.

Furthermore, gaps in PHC functions remain present in Brazil, even where the SUS has had substantial progress (1212. Fausto MC, Bousquat A, Lima JG, Giovanella L, de Almeida PF, de Mendonça MH, et al. Evaluation of Brazilian primary health care from the perspective of the users: accessible, continuous, and acceptable? J Ambul Care Manage. 2017;40(2 Suppl):S60.). The recommendations from Alma-Ata still sound fresh. For many Brazilians, PHC services are not regularly the first level of contact; these services are usually available only where people live, not where they work; and PHC services are frequently unable to start a “continuous health care process” within themselves, less so if specialized services are involved. Such flaws in PHC are worsening rapidly due to the recent economic and political crises and the long-term austerity measures that have followed (1313. Massuda A, Hone T, Leles FA, de Castro MC, Atun R. The Brazilian health system at crossroads: progress, crisis and resilience. BMJ Glob Health. 2018;3(4):e000829.). The cities are where the health system failures are being exposed first (1414. Watts J. Brazil's health system woes worsen in economic crisis. Lancet. 2016;16;387(10028):1603-4.). Thus, analysis of health system transformations at the municipal level are fundamental to understanding PHC achievements and gaps.

Thumbnail
TABLE 1
Highlights of the health system in the city of Curitiba, Paraná, Brazil, 1950 – 2016

In the 1990s, with the implementation of the SUS, Curitiba became one of the first cities in the country to assume full responsibility for health system management. The city was divided into “health districts” to organize health planning and coordination (2121. Moyses SJ, Oliveira CA, D'angelis MA, Paciornik EF. A construção social do distrito sanitario. In: Ducci L, Pedotti MA, Simão MG, Moyses SJ, eds. Curitiba: a saude de bracos abertos. Rio de Janeiro: Cebes; 2001.). PHC coverage gradually increased. In 1992, the Family Medicine concept was introduced through cooperation with the Government of Canada. Since then, a dual model of PHC organization has been in place in the city. The “conventional model,” based on internal medicine physicians, pediatricians, gynecologists, nursing professionals, and community health agents, who cover wider areas, predominated in the central PHC units; and the “family health” model, with each multiprofessional team (including a general practitioner) responsible for a list of territory-defined population, was implemented in new and peripheral PHC units. Curitiba was also a pioneer in the inclusion of dental teams in PHC (2020. Massuda A. Construindo novos caminhos para a reforma na saúde: reflexões sobre a práxis da formulação e implementação de mudanças na gestão e no modo de produção de práticas de saúde no SUS em Curitiba [tese]. Campinas: Universidade Estadual de Campinas; 2014.).

In parallel to the SUS, private health services grew, offering outpatient, hospital, and diagnostic services. From 2000 – 2016, the population covered by private health insurance in Curitiba rose from 38% to 52%.

Since the SUS implementation, there has a significant improvement in indicators: reduction of infant mortality (Figure 1); reduction of maternal mortality, from 53.6 / 100 000 in 1996 to 23.9 in 2012, and to 8.6 in 2016; control of infectious diseases, such as tuberculosis; elimination of vertical transmission of HIV in 2013; and decrease in the hospitalization rate due to conditions that can be treated by outpatient services (2323. Afonso MP, Shimizu HE, Merchan-Hamann E, Ramalho WM, Afonso T. Association between hospitalisation for ambulatory care-sensitive conditions and primary health care physician specialisation: a cross-sectional ecological study in Curitiba (Brazil). BMJ Open. 2017;1;7(12):e015322.).

CHALLENGES AT THE MUNICIPAL LEVEL

Despite the advances, Curitiba faces challenges typical of any big city in Latin America. In 1980 – 2013, there was rapid population growth in Curitiba and its metropolitan area, from 1.5 million to 3.5 million people. This demographic transition increased the proportion of those middle-aged and elderly. The epidemiological shifts have resulted in a triple burden of diseases: increased violent deaths—Curitiba was ranked 42nd most violent city in the world in 2013 (2424. Brazilian Forum of Public Security. Statistical yearbook of public security. 2017. Available from: www.forumseguranca.org.br/ativities/anuario Accessed 27 July 2018.
www.forumseguranca.org.br/ativities/anua... ); expansion of chronic noncommunicable diseases, including cardiovascular, cancer, and mental health disorders; and persistence of infectious diseases, with high rates of leptospirosis mortality, late diagnosis of HIV/AIDS, and increasing incidence of congenital syphilis. Meanwhile, the health system expanded in services and management complexity, increasing its costs and requiring permanent innovation capacity, especially in PHC.

Popular demands regarding the municipal health system were one of the drivers for a government change in 2013, with the elected mayor emphasizing participative management, innovation, transparency, and humanization of public policies. The municipal planning for the 4-year period from 2014 – 2017 (1717. Curitiba Municipal Health Secretariat. Municipal health plan 2014 – 2017. Available from: www.saude.curitiba.pr.gov.br/images/Plano_curvas.pdf Accessed 20 January 2018.
www.saude.curitiba.pr.gov.br/images/Plan... ) defined the following five major challenges for the SUS in Curitiba.

Despite the city's 109 PHC units (in 2013), covering virtually the entire territory, access was a major problem. The predominant model of organization, based on vertical programs, provided medical appointments mostly for individuals who “fit” into the hypertension, diabetes, mental health, and maternal and child health services programs. This left few consultations, offered on a first-come basis, for others. As a consequence, long queues formed in the early morning, before the units even opened for the day, and many people sought care in emergency clinics instead.

The SUS in Curitiba has municipal services for medical and non-medical specialties, and contracts private services for outpatient and diagnostic support. Long waiting lists for consultations with specialists (average was < 3 months, but up to 2 years) was one of the main complaints of the population. Low level of interaction among PHC and secondary care persisted despite some established mechanisms for communication, i.e., a partially-integrated electronic medical records. Most of the specialists' availability was for continuing care, which should be done by the PHC, and only about 10% – 20% were open for new cases. As a result, specialized care was overbooked with patients whose conditions could have been treated by PHC services.

Emergency and urgent care were historically performed by hospitals in Curitiba. In the 2000s, urgent units were created apart from hospitals. In 2013, there were eight urgent care units, the UPAs, offering 24-hr service. However, these services absorbed the failures of the health system, such as the low performance of PHC and lack of hospital beds. As a consequence, the UPAs became points of extreme tension, overwhelmed by simple cases that should be seen by PHC and by severe cases that should be admitted to the hospital.

4. Underuse of information for health evaluation

The growth of SUS services in Curitiba happened without the corresponding funding from the federal and state governments, requiring increased resources from the municipal treasury. From the early 1990s – 2013, the percentage of municipal revenue for health grew from 7% to around 18%. In 2016, the total budget for health was R$ 1.62 billion (R$ 858.26 per-capita; US$ 268.20), 52% funded by the municipality. Despite the increase in municipal investment, the budget did not cover the total health cost. As a consequence, a fiscal debt of approximately 10% of the annual budget was incurred.

In addition, national and municipal regulations governing human resources created challenges regarding the specifics of diverse professional categories (> 7 500 health professionals hired by the municipality) and services of varying levels of complexity. A public municipal foundation to manage specialized services was created in 2012, but administrative issues for human resources persisted.

INNOVATIONS AT THE MUNICIPAL LEVEL

Definition of a new normative framework

A normative framework for the role of PHC in the health system was established by a Municipal Decree in 2013 (2828. Municipality of Curitiba. Decree 560: dispõe sobre regulamentação da atenção primária à saúde na Secretaria Municipal da Saúde. Available from: http://mediaenterprise.dohmsweb.com.br/mediafiles.sismuc.org.br/legislacao/264_1271.pdf Accessed 16 August 2018.
http://mediaenterprise.dohmsweb.com.br/m... ). It redefined guidelines and set common goals for all PHC services in Curitiba to:

To facilitate the role of PHC as the main gateway to the health system, a set of measures were implemented:

Thumbnail
FIGURE 3
Regulation of referrals from primary health care to specialized care, mediated by family health support groups (NASF) teams or tele-health, in the SUS of the city of Curitiba, from 2014 to 2016

Exploring the local experiences of innovative municipalities in decentralized health systems provides outstanding contributions to understanding health systems in the Latin American context. In Curitiba, the historical analysis highlights the key role of urban planning in the implementation of PHC, influenced by the Alma-Ata recommendations before there were any national policies for the area. After 40 years, the expansion of PHC changed the model of hospital-based health care. However, the sub-optimal functioning of PHC is an important cause of health system failures, requiring permanent capacity for innovation.

The prioritization of PHC in the health system in Curitiba, together with the introduction of the innovative practices described in this report, produced increased access, improved performance, and better coordination of care by PHC teams. The investment in improving professional clinical skills and the ability to work through multiprofessional teams in health networks that interact with the various specialized care services were some of the more successful measures taken.

Finally, we highlight the fundamental role of international guidelines for health systems in hard times. In the midst of a military dictatorship, Alma-Ata's recommendations promoted the first experiences of PHC in Brazil. Today, in a context of austerity, the SDGs reaffirm the right to universal health care—not just basic packages for the poor—to prevent setbacks and to enable better health for all.

We would like to thank the City of Curitiba and all the SUS health professionals working in primary health care in 2013 – 2016.

This is an open access article distributed under the terms of the Creative Commons Attribution-NonCommercial-NoDerivs 3.0 IGO License, which permits use, distribution, and reproduction in any medium, provided the original work is properly cited. No modifications or commercial use of this article are permitted. In any reproduction of this article there should not be any suggestion that PAHO or this article endorse any specific organization or products. The use of the PAHO logo is not permitted. This notice should be preserved along with the article's original URL. 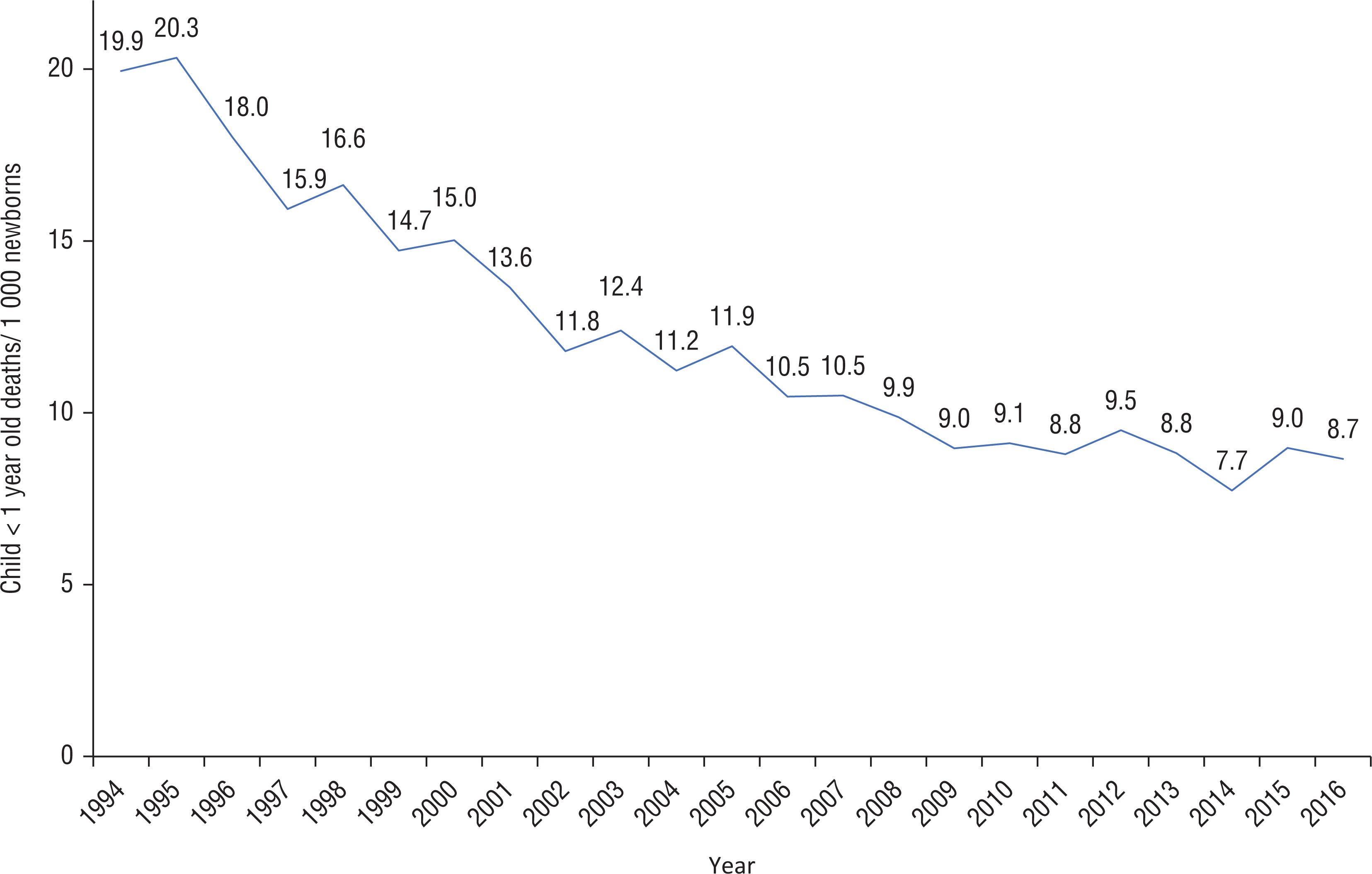 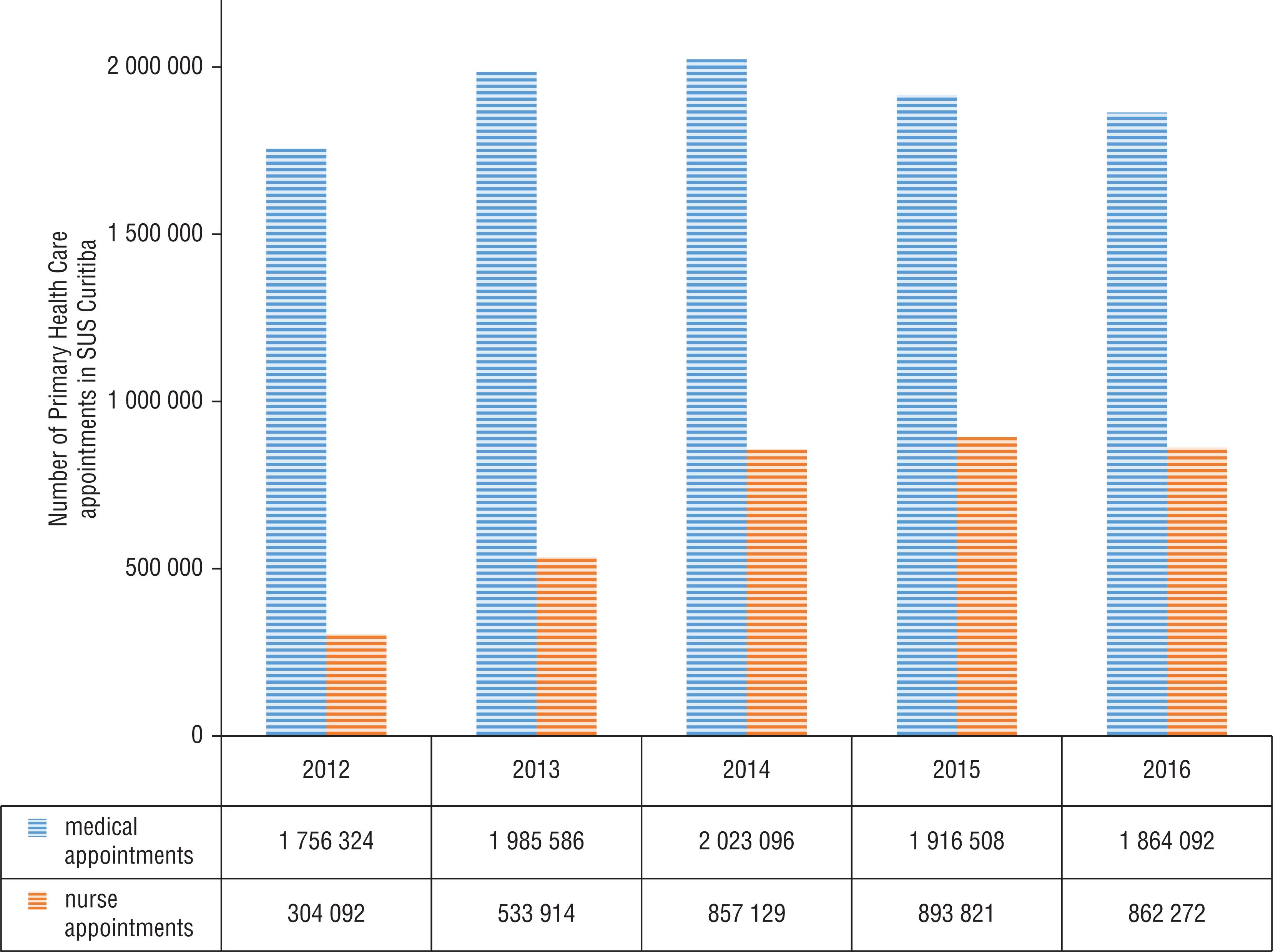 FIGURE 3   Regulation of referrals from primary health care to specialized care, mediated by family health support groups (NASF) teams or tele-health, in the SUS of the city of Curitiba, from 2014 to 2016 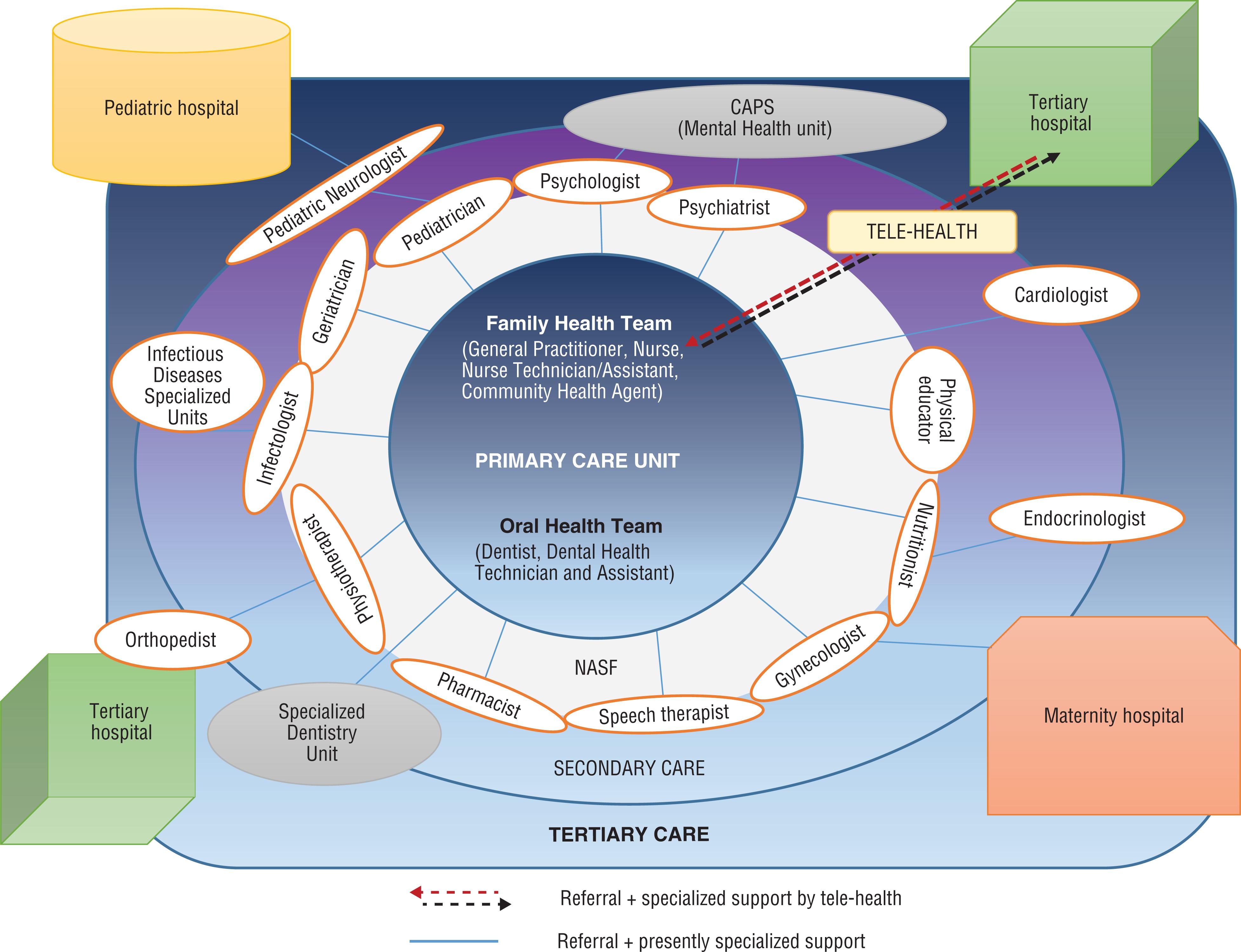 Source: Prepared by the authors with 2014 data from the City of Curitiba, Department of Primary Care, Curitiba Municipal Health Secretariat.