To compare inequalities in full infant vaccination coverage at two different time points between 1992 and 2016 in Latin American and Caribbean countries.

Analysis is based on recent available data from Demographic and Health Surveys, Multiple Indicator Cluster Surveys, and Reproductive Health Surveys conducted in 18 countries between 1992 and 2016. Full immunization data from children 12–23 months of age were disaggregated by wealth quintile. Absolute and relative inequalities between the richest and the poorest quintile were measured. Differences were measured for 14 countries with data available for two time points. Significance was determined using 95% confidence intervals.

The overall median full immunization coverage was 69.9%. Approximately one-third of the countries have a high-income inequality gap, with a median difference of 5.6 percentage points in 8 of 18 countries. Bolivia, Colombia, El Salvador, and Peru have achieved the greatest progress in improving coverage among the poorest quintiles of their population in recent years.

This was an observational-ecological study based on full immunization data, disaggregated by country, obtained from the WHO Global Health Observatory data repository (1717. World Health Organization. Global Health Observatory [Internet]. Geneva: WHO; 2019 [cited 2019 Dec 21]. Available from: https://www.who.int/gho/en/
https://www.who.int/gho/en/... ), as a product of microdata reanalysis from Demographic and Health Surveys (DHS), Multiple Indicator Cluster Surveys (MICS), and Reproductive Health Surveys, conducted from 1992 to 2016. Our study outcome was full immunization, defined as the percentage of children 12–23 months who received a dose of Bacillus Calmette-Guérin (BCG) vaccine, three doses of polio vaccine (excluding polio at birth), three doses of combined DTP vaccine, and one dose of measles vaccine. Because some countries use alternative vaccination schemes (18–29 or 15–26 months), mostly based on the age at which the measles vaccine is administered, we excluded Colombia-2015, Cuba-2014, Haiti-2013, Jamaica-2005, Panama-1996, Suriname-2016, and Trinidad and Tobago-2011 (1818. World Health Organization. Full immunization coverage among one-year-olds (%) [Internet]. Global Health Observatory. Geneva: WHO; 2019 [cited 2019 Dec 12]. Available from: https://www.who.int/data/gho/indicator-metadata-registry/imr-details/3317
https://www.who.int/data/gho/indicator-m... ). This adjustment in the indicator was made using the definitions found in the Health Equity Monitor Compendium of Indicator Definitions (1919. World Health Organization. Health equity monitor: compendium of indicator definitions. [Internet]. Geneva: WHO; 2018 [cited 2020 Feb 23]. Available from: https://www.who.int/gho/health_equity/outcomes/health_equity_indicator_compendium.pdf?ua=1
https://www.who.int/gho/health_equity/ou... ). Socioeconomic data were disaggregated by wealth quintile (Q1: poorest, Q2: poor, Q3: middle, Q4: rich, and Q5: richest). Demographic surveys classify a household's socioeconomic level according to its access to basic services and the home's characteristics and infrastructure (2020. Rutstein SO, Johnson K. The DHS wealth index. DHS Comparative Reports No. 6 [Internet]. Calverton, MD: ORC Macro; 2004. Available from: https://dhsprogram.com/pubs/pdf/CR6/CR6.pdf
https://dhsprogram.com/pubs/pdf/CR6/CR6.... ).

Countries were included based on availability of complete data for the variables of interest and survey year. Most recent immunization coverage analysis was done with data from the most recent survey conducted in each country between 1992 and 2016. As shown in Tables 1 and 2, the year of the most recent survey is not the same for all countries. Analysis of immunization differences over time was done with data from the last two surveys conducted during the study period, except for the countries that had only one year of data, i.e., Brazil, Jamaica, Mexico, and Panama.

To analyze the latest immunization coverage, we measured absolute (difference Q5 - Q1) and relative (ratio Q5 / Q1) changes in immunization data for each country. Median values were also calculated to compare the gradient of coverage between socioeconomic status. To study how immunization disparities have changed over time, we measured absolute differences in coverage in one subgroup compared to another (2121. Schneider MC, Castillo-Salgado C, Bacallao J, Loyola E, Mujica OJ, Vidaurre M, et al. Métodos de medición de las desigualdades de salud. Rev Panam Salud Pública. 2002;12(6):398–415.). Specifically, differences between the two surveys were analyzed by comparing the annual absolute change in national coverage and the annual absolute difference for each quintile (Q1 and Q5) (1919. World Health Organization. Health equity monitor: compendium of indicator definitions. [Internet]. Geneva: WHO; 2018 [cited 2020 Feb 23]. Available from: https://www.who.int/gho/health_equity/outcomes/health_equity_indicator_compendium.pdf?ua=1
https://www.who.int/gho/health_equity/ou... ). We also included more complex inequality measures data (SII and RCI) from the WHO repository (1616. Restrepo-Méndez MC, Barros AJD, Wong KLM, Johnson HL, Pariyo G, França GVA, et al. Inequalities in full immunization coverage: trends in low- and middle-income countries. Bull World Health Organ. 2016;94(11):794–805. http://dx.doi.org/10.2471/BLT.15.162172
http://dx.doi.org/10.2471/BLT.15.162172... ). A positive value in both indices indicates that immunization coverage is greater in the richest quintile, while a negative value means that the coverage is greater in the poorest quintile (2222. World Health Organization. State of inequality: childhood immunization. Geneva: WHO; 2016.). Annual absolute rate of change was calculated by subtracting the national average in the previous survey from the national average in the latest survey and dividing by the number of years between surveys. Annual absolute differences in the rate of change were calculated by subtracting the annual change rates of the richest quintile from the annual change rates in the poorest quintile, producing an annual difference in the rate of change in percentage points. A positive value demonstrates faster coverage growth for the poorest quintile, while a negative value reflects a more favorable difference in the rate of change for the richest quintile. The interpretation of the differences in coverage for all possible scenarios has been detailed elsewhere (2222. World Health Organization. State of inequality: childhood immunization. Geneva: WHO; 2016.). The average improvement level was obtained by averaging the differences in national coverage in the recent and previous surveys. Statistical significance was established with 95% confidence intervals (CI). All statistical analyses were performed using Microsoft Excel.

Coverage by wealth quintile varied extensively between and within countries (Table 1). The median full immunization coverage was 69.9%, according to data from the 18 countries included (interquartile range is 22 percentage points: 57.1% to 79.3%). Two-thirds of the countries had national coverage much higher than the combined countries average (68.3%). Higher-income absolute inequality was high in eight countries, exceeding the regional median of 5.6 percentage points between the first and fifth quintiles. Only Belize, El Salvador, and Jamaica showed lower-income absolute inequality, demonstrating that in absolute terms, coverage was significantly higher in quintile one than in quintile five. The highest level of inequality was observed in Haiti, with a difference of 37 percentage points (95% CI: 24.7–49.4) between the richest and poorest quintiles, and a relative inequality at least twice as high in quintile five compared to quintile one. Of the 18 countries in the study, 12 had higher-income inequality with a positive SII; only in Guyana was the index not significantly different from zero. Although six countries had negative indices, indicating a lower-income inequality, the corresponding results of positive and negative values from RCI and SII were the same. Bolivia and Guyana were not significantly different from zero (Table 2).

Analysis of coverage differences between surveys included data from 14 countries. Brazil, Jamaica, Mexico, and Panama were excluded because there was no second survey data available during the study period. In most countries (57%), the national coverage was higher in the year in which the most recent survey was conducted, compared to coverage from the previous survey, which varied widely (range: 41.4% [Haiti] to 89.6% [Costa Rica]). Six countries (Belize, Dominican Republic, Ecuador, Guatemala, Haiti, and Paraguay) showed negative values with a decrease in national coverage between surveys (Table 2). The average level of improvement in national coverage between countries was 4% (range: -19.7% [Ecuador] to 44.8% [El Salvador]). Analysis of differences between surveys showed that four countries achieved an increase in national coverage along with a faster improvement in quintile one compared to quintile five. Differences in the rate of change were significant in Guyana, Honduras, and Nicaragua, where the full immunization rate in the richest quintile exceeded the poorest quintile by at least 0.6 percentage points per year. Belize, Dominican Republic, and Paraguay showed increases in the rate of change in the lower-income group, resulting in a faster improvement in the first quintile and surpassing the fifth quintile. Rate changes resulting in negative differences were important in Costa Rica, Ecuador, Guatemala, and Haiti, with reductions of at least 10 percentage points per year, resulting in a significantly reduced immunization coverage among children from the poorest households during the two periods studied (Figure 1).

To our knowledge, this is the first study that addresses the state of socioeconomic inequalities in full immunization focused exclusively on infants from LAC countries. The findings of this study have critical relevance for the region when analyzing changes and socioeconomic differences in the state of immunization. We hope that the results will contribute to the development of public health policies that guarantee universal coverage and equitable access to vaccines, particularly for the poorest children. Policies should be oriented to: (i) incorporate immunization monitoring in all socioeconomic subgroups; (ii) develop strategies for integrating health programs and health services; (iii) strengthen intersectoral alliances between key actors; (iv) prioritize vulnerable population groups; and (v) systematize successful experiences (11. Etienne CF. Expanded Program on Immunization in the Americas: 40 years. Rev Panam Salud Publica. 2017;41:e139. doi: 10.26633/RPSP.2017.139
https://doi.org/10.26633/RPSP.2017.139... , 1616. Restrepo-Méndez MC, Barros AJD, Wong KLM, Johnson HL, Pariyo G, França GVA, et al. Inequalities in full immunization coverage: trends in low- and middle-income countries. Bull World Health Organ. 2016;94(11):794–805. http://dx.doi.org/10.2471/BLT.15.162172
http://dx.doi.org/10.2471/BLT.15.162172... ).

To achieve universal vaccination, nations must begin to monitor immunization among the different economic subgroups within the population to plan and implement health strategies that guarantee all children have equitable access to vaccinations—especially the poorest children. Vaccinations reduce both poverty and direct and indirect health care costs by preventing diseases. Thus, they become a social protection measure that increases quality of life. Easier access to vaccinations should be adopted as a strategy to achieve economic development in countries within the LAC region.

The findings in this report are subject to some limitations. As a country-level study, we cannot make causal inferences at the individual level. Some countries do not conduct demographic surveys, or their periodicity is limited, and so our analysis did not cover all countries within the LAC region. Our study uses a secondary data source and its validity depends on the quality and reliability of the sources. The inequality measures used have their own limitation because they do not consider group sizes or changes in coverage in the intermediate quintiles. The analysis of differences over time used data from different surveys that could limit the comparability between periods.

LAC countries experienced significant reductions over time in full immunization inequalities among different socioeconomic groups. While there appear to be decreases in the relative gap in immunization coverage in many countries, these decreases are still small. These disparities persist and, therefore, countries must make a special effort to improve conditions for the poorest children, considering the population's political, economic, and social characteristics that have individual and collective impacts.

The authors thank Demian Herrera from the Hospital Pediátrico Hugo Mendoza Research Center, and Jefrey Lizardo and Carlos Sosa for their contributions in discussing this topic.

Authors hold sole responsibility for the views expressed in the manuscript, which may not necessarily reflect the opinion or policy of the RPSP/PAJPH and/or the Pan American Health Organization (PAHO).

FIGURE 1.   Absolute gaps in full immunization coverage observed between surveys, as reported in Table 1, among children 12–23 months of age from the poorest quintile compared to the richest, in 14 countries of LAC, 1992–2016.aaGray boxes describe undesirable and desirable scenarios. Dark-gray circles indicate countries. Dashed lines indicate the median value. Countries in the lower left corner show the best outcomes in decreasing immunization inequalities both in national averages and for the poorest socioeconomic groups. 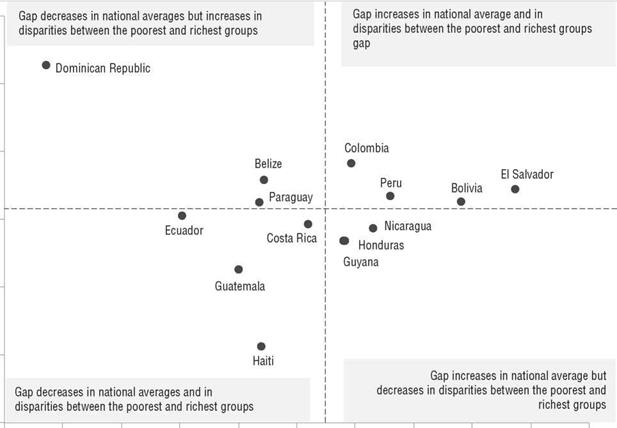 Source: Prepared by the authors from the study data.