This review describes the geographic and temporal distribution of, detection methods for, and other epidemiological features of published leptospirosis outbreaks, with the aim of informing efforts to standardize outbreak-reporting practices.

We conducted a systematic review of leptospirosis outbreaks reported in the scientific literature and ProMED during 1970–2012. Predefined criteria were used to identify and classify outbreaks and a standard form was used to extract information.

During 1970–2012, we identified 318 outbreaks (average: 7 outbreaks/year; range: 1–19). Most outbreaks were reported in the Latin America and the Caribbean region (36%), followed by Southern Asia (13%), and North America (11%). Most outbreaks were located in tropical and subtropical ecoregions (55%). Quality classification showed that there was clear description of laboratory-confirmed cases in 40% of outbreaks. Among those, the average outbreak size was 82 cases overall (range: 2–2 259) but reached 253 cases in tropical/subtropical ecoregions. Common risk factors included outdoor work activities (25%), exposure to floodwaters (23%), and recreational exposure to water (22%). Epidemiologic investigation was conducted in 80% of outbreaks, mainly as case interviews. Case fatality was 5% overall (range: 0%–60%).

Outbreak reporting increased over the study period with outbreaks covering tropical and non-tropical regions. Outbreaks varied by size, setting, and risk factors; however, data reviewed often had limited information regarding diagnosis and epidemiology. Guidelines are recommended to develop standardized procedures for diagnostic and epidemiological investigations during an outbreak and for reporting.

Potential articles for the systematic review were identified by searching 38 electronic database sources (list available from corresponding author upon request) for articles published and indexed from 1 January 1970 to 31 December 2012, which contained the terms “Leptospira,” “leptospirosis,” “Weil disease,” or “Weil’s disease,” while excluding “Leptospirillum.” Search term strings were customized to each electronic database’s individual subject headings and query structure. For regional and non-English databases, relevant translations of leptospirosis were included in searches; e.g., “leptospirose” for African Index Medicus. Reports were stored and organized using RefWorks® bibliographic software to initially detect duplicates. Reports from gray material were collected from ProMED and entered manually.

We reviewed article titles and abstracts to identify and exclude: i) reports with no data; i.e., literature reviews, letters, and other reports on human leptospirosis that did not contain data or that discussed leptospirosis generally; ii) reports with data collected before 1970 and after 2012; and, iii) reports with data unrelated to human cases; i.e., articles related to wildlife, laboratory, or animal reservoirs. Articles were classified as describing human leptospirosis outbreaks if they described an event or events meeting the following criteria: i) event classified by the author or reporting entity as an “outbreak,” or “epidemic,” or “elevated” number of human leptospirosis cases; or, ii) event included at least two suspected cases that were geographically and temporally related. Final articles were assessed for leptospirosis outbreak accuracy based on the following reporting quality criteria: i) description of laboratory diagnosis of cases using the World Health Organization (WHO) Leptospirosis Disease Burden study definitions (11. Costa F, Hagan JE, Calcagno J, Kane M, Torgerson P, Martinez-Silveira MS, et al. Global morbidity and mortality of leptospirosis: A systematic review. PLoS Negl Trop Dis. 2015;9(9):e0003898.); ii) outbreak case ascertainment method (community or hospital/provider-based); and, iii) description of defined outbreak time. Based on these criteria, outbreaks were classified into Option 1 (those with ≥1 confirmed or probable case without any other criteria), Option 2 (those with ≥1 confirmed case without any other criteria), Option 3 (those with ≥1 confirmed case and defined time period), and Option 4 (those with ≥1 confirmed case, defined time period, and active case ascertainment) (Table 1). We assessed outbreak classification quality control by reclassifying a 15% random sample of all reports. Inter-rater agreement was also assessed in a 10% random sample of outbreak reports. In the case of uncertain classification, CMZ made final inclusion decisions.

Temporal distribution. During 1970–2012, there was an average of seven outbreaks each year (range: 1–19) (Figure 3). Reporting increased after 1993 and peaked during 1997–1999 (n = 44). Twelve outbreaks were extracted from reports published in the study period that did not include information about when the outbreak occurred.

At least one laboratory-confirmed leptospirosis case was reported clearly in 39.9% (127/318) of all outbreaks, in addition to probable and/or suspect cases. Sixty-one outbreaks reported probable cases only, which were diagnosed serologically using ELISA and/or microagglutination test (MAT). The proportion of outbreaks with laboratory-confirmed cases was greatest in the earlier years of this review, with 60% (9/15) in 1970–1972 and 73.3% (11/15) in 1973–1975 and a decreasing trend over time. The proportion in the later years, 2009–2012, was 23.5% (8/34). Eighty-six outbreaks had ≥1 confirmed leptospirosis case and stated a defined time for the outbreak duration (Option 3); active case ascertainment was used in 54 of those outbreaks (Option 4). Only the 127 outbreaks that reported ≥1 laboratory-confirmed case (Option 2) were used for the purpose of this further epidemiological and clinical characterization (Table 1).

Outbreak epidemiological characteristics. Overall average outbreak size was 82 cases (range: 2–2 259). The ecoregion with the largest average outbreak size was the tropical/subtropical dry broadleaf forest ecoregion (253 cases, n = 17) followed by moist broadleaf forest (77 cases, n = 46), and temperate broadleaf forest (14 cases, n = 35). Extraction of risk factor information showed that 25% (32/127) of outbreaks were related to work activities such as farming and agriculture, as well as other outdoor jobs that exposed people to rodents and contaminated environment (e.g., landscaping, sewer management). Exposure to floodwaters due to increased rainfall, monsoon, or natural disasters (e.g., typhoons) was identified in 23% of outbreaks (29/127). Twenty-two percent (28/127) of the outbreaks were linked to exposure to recreational swimming, water sports, or domestic use, e.g., bathing. A few outbreaks (4%; 5/127) were linked to Leptospira exposure from dogs. Almost all outbreaks linked to swimming (96%; 27/28) and dog exposure (80%; 4/5) were described as point source. Twenty-three outbreaks (18%) did not have enough information to determine outbreak setting.

Thumbnail
FIGURE 2.
Global distribution of human leptospirosis outbreaks reported in the literature by ecoregion obtained from a systematic literature review from 1970 to 2012

Thumbnail
TABLE 3.
Recommendation for leptospirosis outbreak reporting based on findings from a systematic literature review, 1970–2012

Outbreaks were classified by criteria evaluating certainty of a leptospirosis outbreak (Table 1), based on description of laboratory-confirmed cases, that cases occurred within a defined time period, and that a reliable number of cases were obtained from active case ascertainment. These quality criteria were selected because leptospirosis can be misdiagnosed as other diseases (e.g., dengue, chikungunya, influenza, other acute viral or bacterial illnesses) (1818. Jiménez JIS, Marroquin JLH, Richards GA, Amin P. Leptospirosis: report from the task force on tropical diseases by the World Federation of Societies of Intensive and Critical Care Medicine. J Crit Care. 2018;43:361–5., 2121. Haake DA, Levett PN. Leptospirosis in humans. Curr Top Microbiol Immunol. 2015;387:65–97.) and due to the need to recognize outbreaks as an increase in cases from baseline within a particular timeframe. In most outbreak reports, laboratory diagnosis for leptospirosis was attempted; however, only 40% clearly described identification of laboratory-confirmed cases (Table 1). Furthermore, 61 outbreaks reported only probable cases, which is consistent with an increase in the use of rapid tests based on detection of IgM antibodies. The need for access to specialized laboratories for MAT and/or PCR, the confirmatory tests, is a significant barrier to achieve confirmation and, in the face of an outbreak, antibiotic treatment without waiting for laboratory diagnostic results is recommended clinical practice (2222. World Health Organization. Managing epidemics: key facts about major deadly diseases. Geneva: WHO; 2018.). As the availability of various commercial rapid tests continues to increase (2323. Picardeau M, Bertherat E, Jancloes M, Skouloudis AN, Durski K, Hartskeerl RA. Rapid tests for diagnosis of leptospirosis: current tools and emerging technologies. Diagn Microbiol Infect Dis. 2014;78(1):1–8.), research is needed to identify their role in leptospirosis surveillance and accurate outbreak detection and response.

We observed an increase in the number of outbreak reports linked to floods, particularly during the later years included in the review (1994–2012). This association has long been recognized and believed to be the result of multiple factors. Increases in rainfall and floods of different magnitudes can alter the local ecology of leptospirosis as well as the animal reservoir and human population’s conditions and behaviors. Heavy rain or excess water can facilitate dispersion of leptospires from the soil, where they can survive for long periods of time, to surface water (2828. Bierque E, Thibeaux R, Girault D, Soupé-Gilbert ME, Goarant C. A systematic review of Leptospira in water and soil environments. PLoS One. 2020;15(1):e0227055.). Lastly, displacement, interruption of rodent control activities, and reduced access to safe water can result in outbreaks, while disruptions of health care services can limit access to prompt care (2020. Watson JT, Gayer M, Connolly MA. Epidemics after natural disasters. Emerg Infect Dis. 2007;13(1):1–5.). Data review showed that while outbreaks after swimming or other recreational exposure to contaminated water were almost exclusively point source outbreaks, exposure sources in flood-related outbreaks are difficult to ascertain. The associations between rainfall, environmental exposure, and leptospirosis risk are being investigated with epidemiological (2929. Mason MR, Encina C, Sreevatsan S, Muñoz-Zanzi C. Distribution and diversity of pathogenic Leptospira species in peri-domestic surface waters from south central Chile. PLoS Negl Trop Dis. 2016;10(8):e0004895.

There are many elements influencing how these outbreaks were identified in our review, including existing surveillance systems to monitor trends and to identify outbreaks and laboratory capacity for diagnosis. Furthermore, this review was based on outbreaks reported in the scientific literature, which relies on investigators’ interest and ability to publish. We included ProMED in an attempt to cover non-scientific reporting; however, information provided was generally minimal. Consequently, this review would underestimate the real impact of leptospirosis outbreaks. Authors’ indication of a leptospirosis outbreak and its descriptive data may be subject to inaccuracy due to lack of baseline data, case misclassification, and different approaches to ascertain information. Additionally, the ability to assess temporal trends is limited due to changes in laboratory capacity and surveillance systems over time, and some of the increase in reported leptospirosis outbreaks may be attributed to expansion of laboratory access and/or changes in mandatory reporting regulations.

Leptospirosis outbreaks had a widespread distribution and increased over the study period, in particular in tropical ecoregions. The impact can be significant due to the occurrence of large outbreaks and high fatality. However, outbreak reporting practices were variable and with often limited information regarding diagnosis and epidemiology. More research is needed to understand leptospirosis outbreak predictors and risk factors; however, lack of standardized diagnostic and epidemiological practices is a significant impediment. A concerted and global effort is needed to produce, and subsequently adopt, guidelines for detection, investigation, and reporting of leptospirosis outbreaks.

CMZ, MCS, EB, and FC contributed to developing the original concept. CMZ and BMM designed the review and collected the data. CMZ, EG, and KB performed data analysis. CMZ and MCS wrote the paper. All authors contributed to interpretation of results and reviewed and approved the final version.

Authors hold sole responsibility for the views expressed in the manuscript, which may not necessarily reflect the opinion or policy of the RPSP/PAJPH and/or the Pan American Health Organization.

FIGURE 1.   Flow chart of a systematic literature review of leptospirosis outbreaks reported in scientific literature from 1970 to 2012 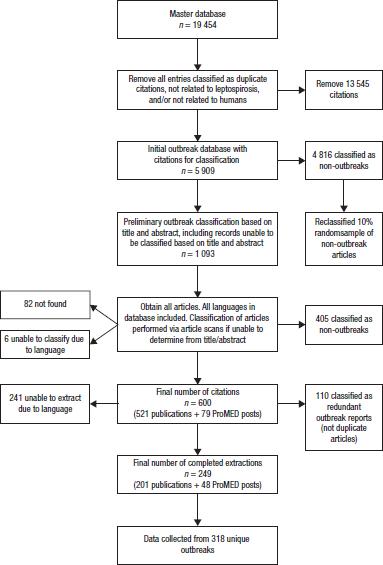 FIGURE 2.   Global distribution of human leptospirosis outbreaks reported in the literature by ecoregion obtained from a systematic literature review from 1970 to 2012 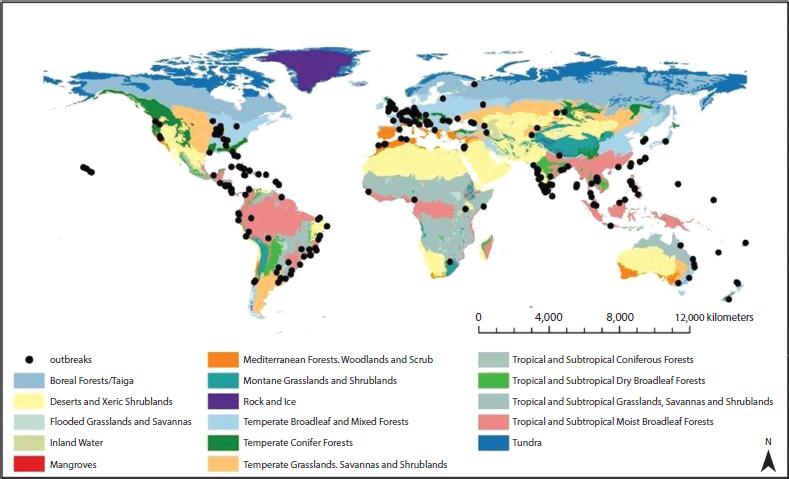 FIGURE 3.   Number of human leptospirosis outbreaks by setting obtained from a systematic review of literature between 1970 and 2012 (n = 306)a 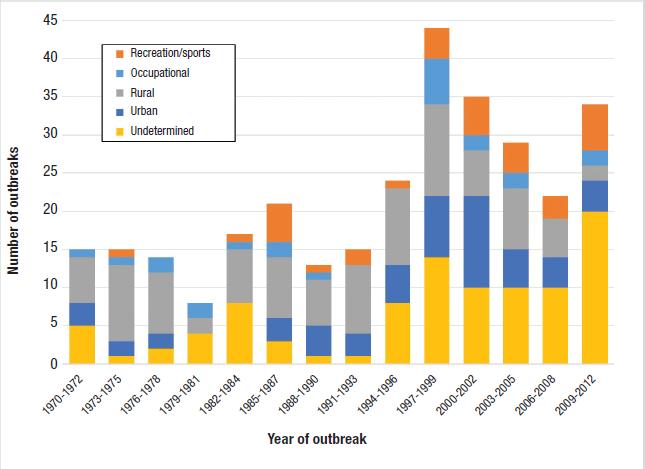 a 12 additional outbreaks were reported in the reviewed time period but did not include a specific year.Source: Prepared by authors from study-collected data.

TABLE 1.   Assessment checklist to evaluate the quality of evidence for leptospirosis outbreak from a systematic literature review, 1970–2012

TABLE 2.   Number and proportion of leptospirosis outbreaks obtained from a systematic literature review from 1970 to 2012 reporting specific clinical manifestations

TABLE 3.   Recommendation for leptospirosis outbreak reporting based on findings from a systematic literature review, 1970–2012