Trends in diabetes mortality identified from death certificates in Colombia, 1979-2017

To describe the mortality trends of diabetes mellitus (DM) in Colombia, by sex and age group, from 1979 to 2017.

We carried out an ecological study using mortality data from the Colombian National Administrative Department of Statistics. Crude and age-standardized annual mortality rates per 100 000 people were estimated. Trends of standardized rates were described by sex and age groups. Joinpoint regression models were performed to study mortality trends.

The DM mortality showed a decreasing trend after 2000 in women and 2004 in men. Primary and secondary prevention programs must continue to be strengthened for an earlier diagnosis of diabetes.

The study met the ethical requirements established by the Colombian regulations, framed in Resolution 8430 of 1993 of the Ministry of Health, whose article 11 classifies this study as “no risk” research, because only secondary data is include and individual identification is not possible.

Figure 3 shows the DM ASMR by sex and age groups. ASMRs were greater in women. ASMR shows an increase from >50 years old, for both sexes (Figure 3). The trend of ASMRs indicated that as age increases, rates become higher; in men ≥80 years ASMRs evidenced a constant rise, while in women for the same age group the trend slightly decreased (Figure 4).

Thumbnail
FIGURE 2.
Crude and age-standardized mortality rates with diabetes as underlying cause, by sex and year, Colombia, 1979-2017

By sex and age groups, the AAPC indicated a significant reduction for men and women in the age groups from 10 to 19 years and from 20 to 29 years throughout the whole study period. A significant increase was observed in the group of 80 and over, for both sexes. Regression models showed significant trend adjustments in different joinpoints, both by sex and for each one of the age groups (Figure 5 and Table 2).

Our trend analysis on crude and ASMR for DM in Colombian showed a gradual reduction in women between 2000 and 2017, while in men that reduction, less accentuated, was observed for 2004-2017. The crude and ASMR were higher among women except in the last three years of the study period. The crude rates in both women and men were lower than the standardized rates, indicating that age is a confounding factor in mortality from diabetes, and the increase in crude rates may indicate greater aging of the population (life expectancy for women in Colombia went from 66.4 years in 1979 to 76.9 in 2017, and for men from 63.8 years to 74.1 in the same period (1616. Expansión. Colombia - Esperanza de vida al nacer 2018 [Internet]. 2020 [cited 2020 Aug 25]. Available from: https://datosmacro.expansion.com/demografia/esperanza-vida/colombia#:~:text=La esperanza de vida se eleva en Colombia&text=Ese año la esperanza de,publicamos la Esperanza de vida
https://datosmacro.expansion.com/demogra... )). Similar findings were reported in diabetic women who died in Argentina (1717. Hernández H, Macías G. Análisis de la tendencia temporal de la mortalidad por diabetes mellitus en Argentina, 1990-2013. Rev Panam Salud Publica. 2017;41(5):1–7.).

Thumbnail
FIGURE 3.
Age-specific mortality rates from diabetes as underlying cause by sex, Colombia, 1979-2017

The decreasing trend experienced by diabetes-related mortality rates most likely reflects the impact of medical advances in the prevention, access, monitoring and treatment of this chronic disease, recognizing that there is still a lack of efforts to enhance the diagnosis of DM, and to improve outpatient care in order to avoid complications (3131. Castaño RA. Modelos de Atención para Diabetes: de lo Ideal a lo Real. In: Cambiando la Diabetes. Bogotá D.C.: Novo Nordisk; 2014. p. 24–42.). Complications can directly influence mortality and morbidity, especially when they occur in the older age whose have increased risk of suffering from pathologies related to aging (3232. Domínguez E. Edad de ocurrencia de los fallecimientos por diabetes en Cuba. Rev Cuba Endocrinol. 2013;24(1):3–17.). On the other hand, the trend of mortality rates reduction may be partially explained by having access to early diagnosis, and the strict control of glycemia and related risk factors (3333. Pildava S, Strele I, Brigis G. The mortality of patients with diabetes mellitus in Latvia 2000-2012. Med. 2014;50(2):130–6.).

The management of diabetes in Colombia has improved with increasingly universal access to the health system (3434. Ministerio de Salud y Protección Social. Comportamiento del aseguramiento [Internet]. 2018 [cited 2020 May 21]. Available from: https://www.minsalud.gov.co/proteccionsocial/Regimensubsidiado/Paginas/coberturas-del-regimen-subsidiado.aspx
https://www.minsalud.gov.co/proteccionso... ). Surveys as the "National Health Survey 2007" (NHS) (3535. Ministerio de la Protección Social. Encuesta nacional de salud 2007. Colciencias; 2009.) and the "National Survey of Nutrition Status of Colombia 2015" (ENSIN, Spanish acronym) (3636. Instituto Colombiano de Bienestar Familiar I. ENSIN: Encuesta Nacional de Situación Nutricional 2015 [Internet]. 2018 [cited 2020 Sep 14]. Available from: https://www.icbf.gov.co/bienestar/nutricion/encuesta-nacional-situacion-nutricional
https://www.icbf.gov.co/bienestar/nutric... ) support the decrease in mortality rates in Colombia. The NHS reported that people with DM received care by a general practitioner (96.5%) and a specialist physician (47.4%). Regarding to risk factors related to DM, people with the disease received recommendations to quit smoking (more than 76.5%), manage stress, reduce weight, perform physical activity, check for glycemia and lipid profiles, and reduce consumption of flour and sugar. In accordance with DM treatments, NHS reported that 61.4% were treated with insulin or another medication, and 81.6% received all the medications. 87.4% of people with DM received control of cholesterol and triglyceride levels and 88.7% of blood or urine glycemia; 78.9% did not use methods to measure glycemia at home (3535. Ministerio de la Protección Social. Encuesta nacional de salud 2007. Colciencias; 2009.).

Thumbnail
FIGURE 4.
Age-specific mortality rates from diabetes as underlying cause, by year and sex, Colombia 1979-2017

Moreover, Colombian healthcare insurers have implemented diabetes promotion and prevention programs in which they include patient education in disease management (nutrition, physical activity, pharmacological and non-pharmacological treatment, and the complications of the disease). However, there is still no evidence about the epidemiological impact of these promotion and prevention programs. Likewise, the reduction of trends of DM mortality could be partially attributed to improvements in the standard of living and in the decrease of poverty levels (4242. DANE. Boletín técnico Encuesta Nacional de Calidad de Vida (ECV). Bogotá D.C.; 2017.).

Our results should be interpreted with caution due to the limitations of the study. Because it is based on secondary data, its coverage and content must be considered. The quality of the information on the underlying cause of DM death taken from the death certificates was rated by the WHO as “average” (4343. Mathers CD, Fat DM, Inoue M, Rao C, Lopez AD. Counting the dead and what they died from: assessment of global status of cause of death data. Bull World Health Organ. 2005;83:171–7.), and it may have been underreported or misclassified. Additionally, it was not possible to discriminate between type 1 and type 2 DM due to the lack of exact information to determine the type of diabetes. Also, it was possible that one of the DM complications had been selected as the underlying cause of death, particularly in the cases of people who died from myocardial infarction, cerebrovascular accident and chronic kidney disease (4444. Morris N, Wang S, Stevens L, Fuller J, Keen H, WHO Multinational Study Group. Mortality and causes of death in the WHO Multinational Study of vascular disease in diabetes. Diabetologia. 2001;44(Suppl 2):S14–21.). Several studies suggest that mortality due to DM would be up to three times higher than that calculated when it is considered as a underlying cause, and is not taken into account when it appears as a contributing cause of death (4545. Balkau B, Papoz L. Certification of cause of death in French diabetic patients. J Epidemiol Community Health. 1992;46(1):63–5.,4646. Fedeli U, Zoppini G, Goldoni CA, Avossa F, Mastrangelo G, Saugo M. Multiple causes of death analysis of chronic diseases: the example of diabetes. Popul Health Metr. 2015;13:21.). Additionally, it should be mentioned that in Colombia the ICD coding rules for the underlying cause of death changed during the study period. It went from the 9th to the 10th revision of the ICD, although there were no changes in DM coding. It should also be noted that the diagnostic criteria used for the diagnosis of diabetes have been maintained over time, including fasting plasma glucose of 7 mmol/l (4747. Ministerio de Salud. Resolución 412 de 2000 [Internet]. 2000 [cited 2020 Aug 22]. Available from: https://docs.supersalud.gov.co/PortalWeb/Juridica/OtraNormativa/R0412000.pdf
https://docs.supersalud.gov.co/PortalWeb... ) and in recent times HbA1c ≥ 6.5% (4848. Asociación Latinoamericana de Diabetes. Guías ALAD sobre el diagnóstico, control y tratamiento de la diabetes mellitus tipo 2 con medicina basada en evidencia. Rev ALAD. 2013;20.), so no variations over the time have occurred.

Finally, our study has provided information on the trend of national DM mortality rates in Colombia, for a period of 39 years and it was based on information gathered from death certificates. Promotion and prevention programs must continue to be strengthened for the early diagnosis of individuals with DM. The quality of mortality information should also be improved, regarding to the correct classification of the type of DM and its assignment as the underlying cause of death. The increase in mortality in the older age group and the differences between sexes could indicate an improvement in survival, better diagnosis, and improvement in registration methods.

The views and opinions in the manuscript are the authors’ and do not necessarily reflect the opinion or policy of the RPSP/PAJPH and/or PAHO. 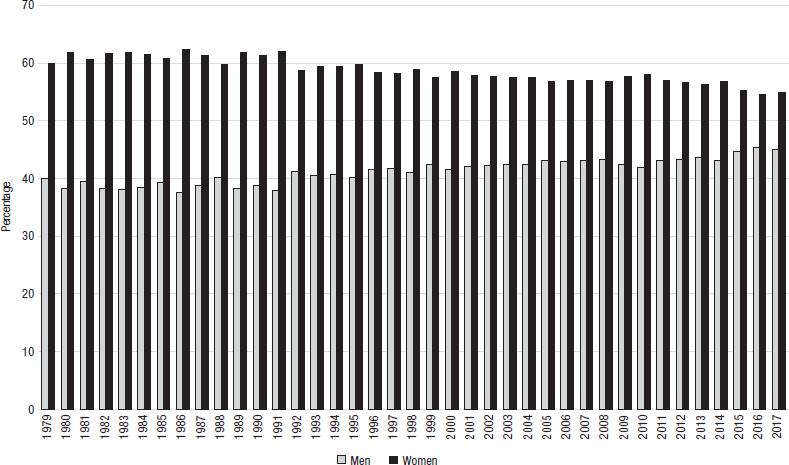 FIGURE 2.   Crude and age-standardized mortality rates with diabetes as underlying cause, by sex and year, Colombia, 1979-2017 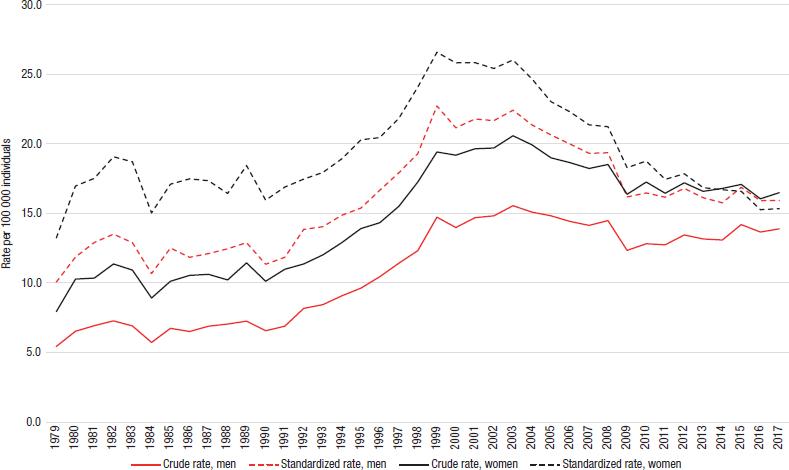 FIGURE 3.   Age-specific mortality rates from diabetes as underlying cause by sex, Colombia, 1979-2017 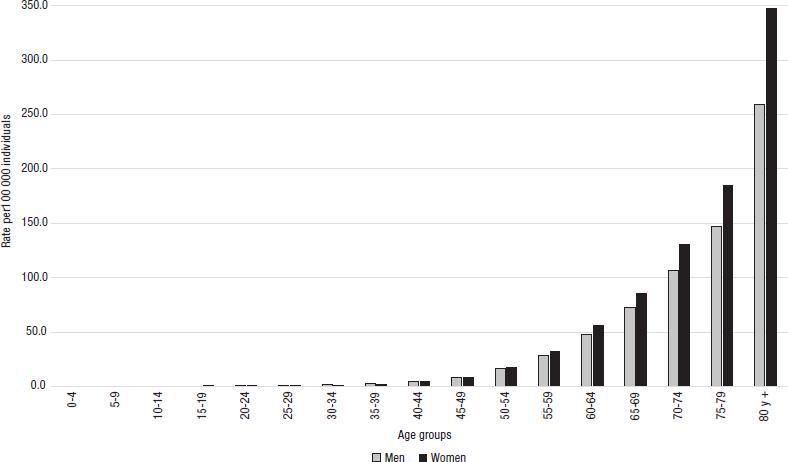 FIGURE 4.   Age-specific mortality rates from diabetes as underlying cause, by year and sex, Colombia 1979-2017 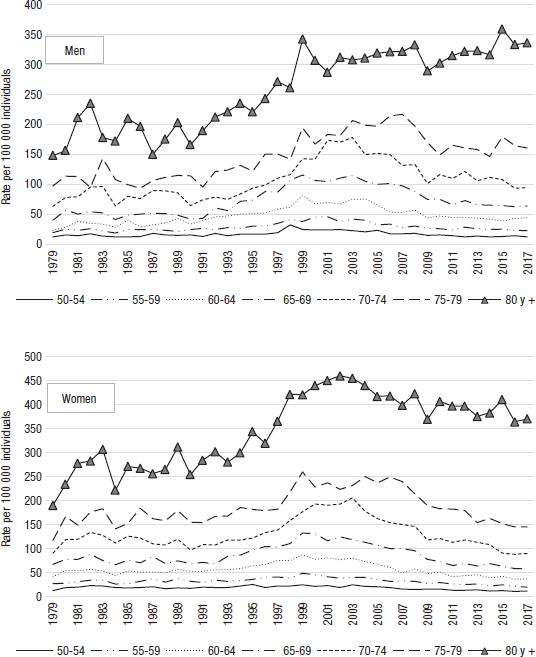 FIGURE 5.   Age-standardized mortality rates from diabetes as underlying cause, by year and sex, with annual percentage change estimated from joinpoint regression models, Colombia, 1979-2017 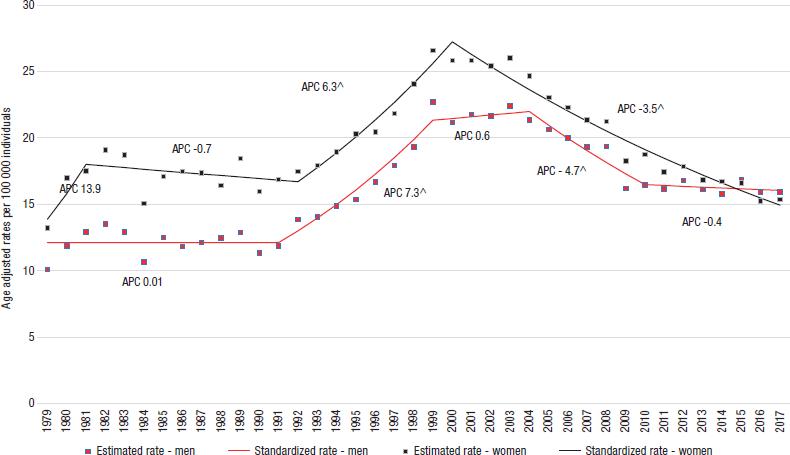