Objective Determining dental caries' experience, prevalence and severity in students applying for degree courses at San Luis Potosi University (UASLP).
Material and Methods A cross-sectional study was carried out involving adolescents and young adults (16 to 25 years old) applying for undergraduate courses at UASLP (~10 %, n=1 027). Two standardized examiners undertook dental examinations; DMFT index, prevalence (DMFT>0), severity (DMFT>3 and DMFT>6) and significant caries index (SiC) were calculated. STATA 9.0 non-parametric tests were used for statistical analysis.
Results Mean age was 18.20±1.65; 48.0% were female. The DMFT index was 4.04±3.90 and caries prevalence was 74.4%. Regarding caries' severity, 48.8% had MDFT>3 and 24% DMFT>6. The SiC index was 8.64. Females had higher caries experience than males (4.32±4.01 cf 3.78±3.78; p<0.05), but similar prevalence and severity (p>0.05). Age was associated with both experience (p<0.001) and prevalence (p<0.01) and to differing degrees of caries' severity (p<0,001). The «filled teeth» component had the highest DMFT index percentage (63.6%) and «missing teeth» the lowest (11.4%).
Conclusions High dental caries' experience, prevalence and severity were observed in this sample of adolescents and young adults. Restorative experience was high (59.5%) compared to studies carried out in other parts of Mexico and Latin-America.

Dental caries is a public oral health problem and one of the major unmet needs in oral health amongst the teenage population of Mexico and other Latin-American countries (1-6). It is an infectious-contagious disease implying an imbalance of normal molecular interactions between the teeth's surface/subsurface and the adjacent microbial biofilm. It becomes expressed during a certain period of time as an accumulative demineralization which, if not treated, has the potential for producing cavities in the enamel and collateral damage in dentine and pulpar tissues (7). Dental caries still remains a dental health problem in several countries; several studies have been carried out in Mexico during the last two decades in different age-groups. A 48 % to 95 % prevalence was reported in preschool children (8-13) while 42% to 88 % dental caries prevalence was reported in a group of 12-year-old children (6,14-16) and 53.4% prevalence in a 15-year-old group of adolescents (6). Dental caries has thus been mainly studied in groups of children and adolescents aged 3 to 15. However, adolescents older than 15 and adults younger than 26 are frequently not included in oral health reports.

Regarding Latin-American countries, several studies have been made in Brazil about adolescents and young adults; however, most of them have been carried out on males (mainly army conscripts) in which the mean for affected teeth was 4.5-4.6 and prevalence reported was 81-82.6 % (20,21). Gushi et al., (3) have reported a 7.09 DMFT index in 16 to 19-year-old boys; however, in a study performed on dentistry students in Mexico City it was observed that the DMFT index was 3 to 3.5 in 17 to 24-year-old groups (22).

Lack of epidemiological information concerning this population group's oral health is a serious limitation as it is important to ascertain the disease's behaviour in all age-groups (as this allows epidemiological monitoring) and the possibility of expanding oral health services to other age-groups including adolescents and young adults increases reduction of caries' prevalence and severity in preschool children (20). This study was thus aimed at determining dental caries' experience, prevalence and severity in a sample of adolescents and young adults applying to San Luis Potosi University during 2007 as there is limited oral health information concerning adolescents in Mexico.

Design, population and sample of study

San Luis Potosi (SLP) is located in north-central Mexico; it covers 62,849 km2 and has a population of 2,410,414. The total population having access to public health services is only 51.3 %. The state marginalization index (SMI) is 0.65573, putting it amongst those states catalogued as having high marginalisation and also meaning that it has high social-spatial inequity (23). The economy is mainly based on the manufacturing industry, trade and non-financial services and construction (24). SLP state participates in the National Salt Fluoridation Programme; according to the Mexican Salt Association there are two types of salt which are distributed throughout the state: iodized and iodized/fluorated (25). SLP state has 58 municipalities; iodized/fluorated salt must not be ingested in 21 of them (26).

This cross-sectional study involved 10% of the total student population (N=10 160) including adolescents and young adults (16 to 25-year-old) from January 15th to June 25th 2007. The subjects were randomly selected from the total number of applicants for the Universidad Autonoma de San Luis Potosi University's (UASLP) bachelor's degree programme. This is the public state university and concentrates most university students from all social-economic levels.

Informed and voluntary written-consent was obtained prior to clinical examination, according to the Declaration of Helsinki's ethical guidelines (27). The protocol was approved by the Clinical Research Committee for the Master's Degree in Dental Science with Specialisation in Advanced General Dentistry Programme at UASLP, Mexico. Eight dentists from the UASLP University Health Unit undertook subject recruitment, each dental examination being performed in artificial light using a dental mirror and explorer. The WHO caries' diagnostic criteria were used for determining the permanent tooth DMFT index (decayed, missing and filled tooth surfaces) (28). The outcome variables in the study were: having had caries (meaning DMFT index overall average), caries' prevalence in permanent dentition (rated 0 = if DMFT was zero and 1 = if DMFT was higher than zero), high caries' experience in permanent dentition (rated 0 = if <4 DMFT and 1 = if e34 DMFT) and very high experience of caries in permanent dentition (rated 0 = if <7 DMFT and 1= if e37 DMFT). The significant caries index (SiC) was also calculated; this refers to the DMFT for the third of the population which is most affected by caries (29). The subjects' age and gender represented the study's independent variables. The care index (CI) was also calculated as part of the analysis as this shows the restorative care to which a population has been exposed (30,31):

Two examiners were trained and standardized using a Kappa test (>0.90) before starting the study. All data were expressed as mean ± standard deviation for continuous variables; frequencies and percentages were calculated for categorical data. Shapiro-Wilks, Levene and Brown Forsythe tests were used for testing variable distribution. The non-parametric Mann-Whitney test was used for comparing continuous variables and the X2 test for comparing categorical variables. STATA version 9.0 was used for statistical analysis; statistical significance was set at p <0.05.

Table 3 shows the results for dental caries prevalence by age and gender. It was found that young adults had a higher risk of dental caries (2.21 RM; 1.423.44 95%CI) than adolescents; females had 28% more possibility of having caries than males (p<0.10). 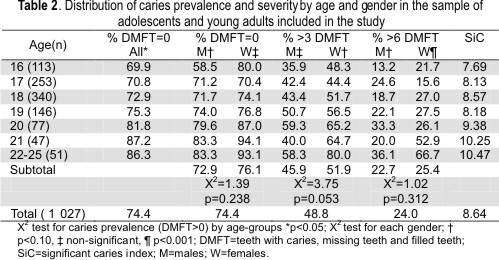 Reports about oral health in adolescents and young adults (16 to 25 years old) are rare; this is thus the first study in Mexico which includes a representative sample. A 74.4 % overall caries prevalence was observed in this report and the degree of severity was 48.8 % for >3 DMFT and 24.0 % for >6 DMFT, whilst the DMFT index was 4.04±3.9 for teeth with caries. Comparison with other studies was limited by previous studies not having the same age range and both genders being involved in the present investigation.

Studying Mexican students' dental caries revealed that males in the present sample were less affected (71.7 % prevalence) than conscripts affected by caries in Brazilian studies (81 %), this being 10 % lower than the Brazilian studies (20,21). Another study carried out in Brazil reported a 4.5 DMFT index while the present study gave 3.48, indicating that the Brazilian subjects had one tooth on average more affected by caries than the Mexicans at the same age. A more unfavourable DMFT index for young Brazilians was reported in another study when comparing the present results with subjects of the same age (Tables I and II). A 5.94, 6.42, 7.13 and 8.86 DMFT index and 90.6 %, 90.5 %, 94.6% and 94.9 % dental caries prevalence were reported in 16-, 17-, 18- and 19-year old adolescents, respectively (3). Reports from countries such as Italy have shown dental caries prevalence (87.8 %) in 18-year-old adolescents being higher than in the present study. A similar dental caries pattern has been reported in 18- and 19-year old Israeli recruits (6.77 DMFT) (17).

By contrast, the present report's results were higher than those observed in male Australian recruits (17- to 20-year-olds) where a 3.59 DMFT was reported. However, a 4.39 DMFT index was obtained for the 21-25-year-old age-group while the Australian researchers observed a 4.63 DMFT index (18). The same authors' results were more encouraging in a more recent study than results from the present study; they observed a 2.43 and 3.44 caries index for the same age-group. They also reported 67.2 % and 73.5 % caries prevalence while in our study the prevalence observed was higher (73.5 %) for the 17 to 20 age-group and 86.7% for the 21 to 25 age-group (19). There are reports of lower DMFT index in subjects having ages comparable to those covered by the present report (32).

The highest DMFT index percentage was returned for the "teeth with caries" component in studies performed on 6 to 15 year-old Mexican children and adolescents, in line with results reported from other Latin-American countries (2,5,33). However, the present study's results indicated that the highest caries index percentage was in the "filled teeth" component, indicating that older students had been exposed to a greater amount of restorative treatments; the same observations have been made from Brazil (3,20,21), Israel (17) and Australia (18,19). Nevertheless, it has been reported that the main DMFT index component for 18-year-old boys was "teeth with caries" (34).

In agreement with most studies, it was found that the experience of caries was higher in females than males and dental caries' prevalence and severity was higher as age increased, as in observations made in other Mexican studies (6,8-14,35) and in studies performed in other parts of the world. It should be mentioned that no differences were founded regarding prevalence and/or severity.

Dental caries is a multifactor disease involving diet, using topical fluorides, preventative programmes in schools, demographic and economic variables and behavior and attitudes concerning oral health. Amongst the limitations hindering comparing our results was that regarding most studies being performed on male samples, even though the usefulness of this kind of study is that epidemiological monitoring can be done. However, the sample studied may not be completely representative of the age-groups included as it is known that females represent the highest percentage of the Mexican population pyramid, whilst they represented only 48 % in this study. Access to being enrolled in a university is different according to social level; students from lower social levels have less possibility of access to a public university while people from the highest levels study in private universities, leaving us a sample being more representative of the middle social economic level. The results and extrapolating them must therefore be carefully interpreted as they were mainly directed towards specific population groups.