The cost of connecting poor households to natural gas in Colombia and its impact on health, 2007

Objective Assessing the cost of subsidizing access to household natural gas (HNG) and its impact on the health of about 35,000 poor households (socioeconomic strata 1 and 2) in Colombia, sponsored by a Global Partnership on Output-Based Aid (GPOBA) project.
Methods The following studies were combined: an analysis of secondary data and analysis of databases provided by the Promigas foundation, demographic data from the 2005 DANE census and databases regarding Central Bank economic statistical series; an analysis of the burden of disease estimated from parameters identified in previous studies; an analysis of the cost of the burden of illness and the estimated costs which were avoided by implementing the HNG connections program; and an analysis of the cost effectiveness of the program linking homes to HNG services.
Results The OBA project led to about 4,000 to 5,000 cases of acute respiratory disease (ARD) and 1,200 to 2,300 outpatient cases of chronic obstructive pulmonary disease (COPD) being avoided during the study period; around 1,200 hospitalizations due to ARD and 500 due to COPD were also avoided. Forty-five to 170 deaths (representing about 45,000 to 90,000 disability-adjusted life years (DALY)) were also avoided. The economic cost of the burden of disease arising from ARI and COPD in such scenario without HNG would have been between 10.7 and 23.6 million dollars, whilst HNG led to costs becoming reduced by about 32 %.
Conclusions This study was a good estimator of the potential impact of the poorest and most vulnerable households gaining universal access to HNG.

Health-related living conditions are an important influence on the economic situation and welfare of everyone in any society, this being particularly true in low-income countries due to the vicious circle of poverty and disease (1). Health is considered stock capital whose product is healthy time which can be used for obtaining money or wages in the market and producing goods in the home or non-market sector (2). The relationship between health risk and poverty has been well-documented (3) .

Pollution from biomass smoke is a major risk factor in developing countries (4) . Nearly half of the world's households in poor countries continue to use biomass fuel (5-6). Exposure to biomass smoke has been associated with low birth weight, acute respiratory infections and infant mortality and, more recently, with children's anaemia and mental retardation (7). Such pollutants (called solid fuel smoke) include respirable particulates, carbon monoxide, nitrogen oxide and sulphur, benzene, formaldehyde, 1,3 butadiene and poly-aromatic compounds such as benzoic(alpha)pyrene (8-9). Exposure to such contaminants in households having limited ventilation (in both developing and industrialized countries) is higher in women and children as they stay longer in the house. Related measurements have shown that concentrations of these pollutants are above international (WHO) and national standards (8, 10). The US agency for environmental protection has estimated particulate matter (PM10 and PM2.5) standard concentrations at 150 mg/m3 and 65 mg/ m3, respectively (11).

Natural gas combustion is ranked globally as the cleanest traditional industrial fttel; particulate matter emissions meet the highest international standards, without having to invest in gas processing equipment. One of the great advantages of natural gas over other fuels is low combustion emission(12).

Most research on intra-domiciliary environmental pollution has been conducted in developing countries and has been associated with determining pollutants and their sources (13). Smith et al., 2004, proposed using exposure-response epidemiological studies conducted outside houses and measuring pollutant concentrations for estimating what happens inside them (14). This model has been used for estimating solid fuel use in sub-regions around the world (14). The population using solid fuel in the American sub-region, including Colombia (AMR-B), was estimated at 24.6 % (18.8-30.8 CI). This means that about a quarter of the Colombian population could be using biofael. It has been estimated that 2.7 % of all disability-adjusted life year (DALY) are attributed to diseases associated with solid fttel smoke (2.5 % in men and 2.8 % in women); 32 % occur in Africa (AFR-D), 37 % in southeast Asia (SEAR-D) and 16 % in China, Australia and other countries (WPR-B) (14). Having access to clean fuel paints a different picture regionally and intra-regionally.

Children aged under 5 represent the highest exposure group, although global levels remain unknown (15-16). Many studies have shown a consistent relationship between several diseases and solid fttel use; they have shown that solid fttel smoke causes about 35.7 % of acute respiratory disease (ARD), 22 % chronic obstructive pulmonary disease (COPD) and 1.5 % regarding cancer affecting the tracheae, bronchi and lungs (17).

Furthermore, natural gas represents a health intervention to the extent that it affects household economy and reduces the burden of respiratory diseases in the communities in which it is used to improve individual and/or community living conditions (18). The present investigation was aimed at assessing the cost of subsidizing access to household natural gas (HNG) for about 35,000 households (socio-economic strata 1 and 2) in Colombia and its impact on their health; it was sponsored by a Global Partnership on Output-Based Aid (GPOBA) project.

The following studies were combined to perform the study: a secondary data analysis (a systematic review of the literature) (19) and analysis of databases provided by the Promigas foundation, demographic data from the 2005 DANE census and Banco de la Republica's economic statistical series' databases; an analysis of the burden of disease estimated from parameters identified in earlier surveys in rural areas near the Colombian Caribbean; an analysis of the cost of the burden of illness and the estimated costs avoided by implementing the HNG connections program (20); and a cost effectiveness analysis of households connections to the HNG service (21).

The study was conducted in two phases: estimating the burden of disease (ARI and COPD) associated with biomass smoke in the population being covered by the project at this stage to combine the results ofthe literature review and estimating the potential economic impact of the subsidized program for connection to the HNG. The estimated population data concerns the projected 2005 DANE census population.

The cost-effectiveness of introducing HNG was analyzed for assessing the economic impact; a decision-tree model was thus developed (Figures 1 and 2) considering two possible scenarios: households without HNG and households having HNG. Both share the possible scenarios in which events can be found elsewhere, for example, patients suffering ARD and /or COPD and without ARD /or COPD. The transition from one event to another was determined by the probability of natural gas coverage and efficiency as a health technology. Assessing the model assumed that people living in homes having natural gas which were not protected against respiratory diseases would be equally likely to suffer respiratory infection caused by other causes and that the effective protection provided by natural gas against respiratory disease would also depend on housing conditions (ventilation of kitchens and independence and efficiency of stoves); similar conditions were assumed for all households. 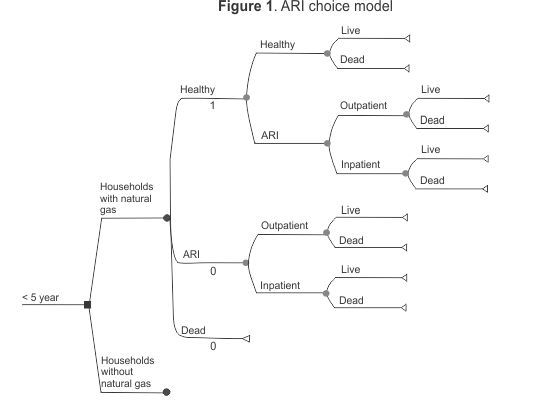 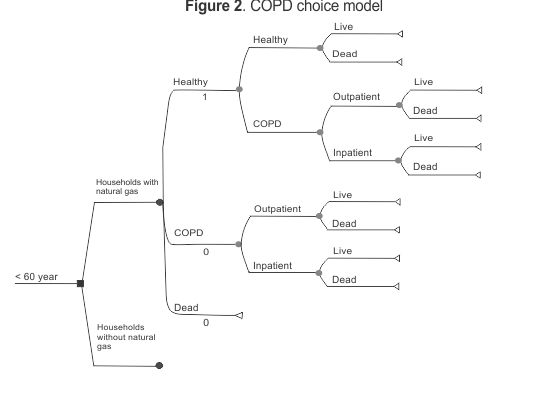 The horizon was 5 years for both children and adults, having a 3 % discount rate for both costs and outcomes. Table 1 gives the model's parameters.

The total cost of the burden of respiratory disease associated with biomass smoke, the cost of disease burden averted by the HNG connection grant program where both outpatient (medical) and ARI in hospitalized children and COPD in older adults, deaths from these diseases and the years of disability-adjusted life years (DALYs) averted were the outcomes measured or result of the program for the model.

The incremental cost-effectiveness ratio (ICER) was used for comparing alternatives with and without an HNG programme, using the following formula:

The ICER compared the difference in cost regarding differences in health outcomes in different scenarios. Avoided costs were deducted from the cost of implementing the grant program for cost effectiveness of disease analysis and were divided between health outcomes (life expectancy gained per woman, year of life saved, deaths prevented, etc.). The costs were expressed in dollars and pesos (2008 prices). All future costs and benefits were discounted at an annual 3 % rate and were expressed in US dollars for 2005 for the sensitivity analysis using different assumptions for the parameters.

Moreover, the project's internal rate of return was estimated to assess the investment's profitability, assuming that all households covered by the project received an average $137 to $250 per month income, monthly average costs without subsidy would have been $2.3 to $1.9 and the average monthly subsidy cost would have been $4.5 to $3.5, all households would have received an HNG installation cost subsidy of $146 and all households prior to HNG installation would have consumed various fuels having an average monthly cost of $10.1 to $8.0. Households were followed-up for 20 years and yields were assumed to be constant.

The economic costs of the burden of disease arising from ARI and COPD in a scenario without HNG would range between US 10.7-23.6 million dollars. A scenario involving HNG would reduce these costs by about 32 % (Table 3).

Other benefits arising from HNG connection to households were the savings produced by stopping using different fuels which were more than twice more costly than paying the monthly bill if households did not receive subsidies from the state. In the scenario where households received the state subsidy, these costs could have been up to 4 times what the household was paying each month for the service. If it were assumed that these households maintained this condition for about 20 years, then returns on such savings could have produced the initial investment (HNG connection subsidy).

Table 4 gives the internal rate of return for the HNG service connection project for poor households; this would have been between 37 % and 46 % in cases where service consumption was not subsidized and 50 % to 64 % in a scenario involving state subsidies.

There were 9.74 million households in Colombia according to the 2005 DANE census; 3.92 million (40.3 %) had access to the HNG service. The Colombian Ministry of Mines and Energy reported 4.93 million homes connected to HNG (26) in 2008, representing a growth of more than one million homes in three years, covering over 50 % of all households. This demonstrated the increased risk of ARI, COPD and lung cancer in households cooking with biofuel (27). The limited information in this study only measured the disease burden of ARI and COPD assuming an underestima-tion of the protective effects of HNG, for example, lung cancer. However, as shown, assuming the WHO criteria (3), HNG is a highly cost-effective technology and thus its incorporation into benefits for the social develop-ment of poor and marginalized communities is beyond dispute.

This study was thus a good estimator of the potential impact of the poorest and most vulnerable households gaining universal access to HNG, being those which generate the greatest burden of disease by pollution. This investigation provides a means of supporting public policy aimed at impelling decision-makers to mitigate or eliminate pollution or improve the efficiency of stoves, switching from burning biomass to using HNG and thereby reducing the frequency of cases of ARI, COPD and other respiratory diseases and household economy reorientation and improvement (28). Such findings were consistent with CONPES document 3344/2005 setting out guidelines for formulating policy regarding preventing and controlling air pollution (29). It has been estimated that 6,000 deaths, 7,400 new cases of chronic bronchitis (COPD), 13,000 hospitalizations and 255,000 visits to emergency rooms occur in Colombia per year, according to Larson, costing between 230 and 600 billion pesos in 2004 (28).

Incentives are already in place in Colombia (Article 97, Act 142/1994) facilitating the implementation of policy regarding subsidies. The cost of household connection and meters for strata 1, 2 and 3 can be covered by the municipality, department or the nation through budgetary support, but political goodwill is an important input for achieving goals for reducing pollution from biomass smoke (30). However, given the high rates of return for this project (37 % and 46 % when service consumption was not subsidized and 50 % to 64 % in a scenario with state subsidies) it is very difficult to deny such choice.

Acknowledgments: This research was financed by the Promigas foundation as part of the Natural Gas Connections Involving Poor Households Project sponsored by the Global Partnership on Output-Based Aid (GPOBA) for 34,137 poor households in 84 localities throughout Colombia.

SciELO Analytics
Dimensions
The cost of connecting poor households to natural gas in Colombia and its impact on health, 2007
PlumX