Objective To evaluate the frequency of obesity and lifestyle risk factors in the population of Barra do Garças, Legal Amazon.

Results Smoking and alcoholic consumption was higher among men compared to women. Almost 60 % of men engaged in leisure-time physical activities, whereas only 42.4 % of women practiced physical activity. Women were engaged in mostly sedentary behavior activities, such as watching television and using the computer use than men. Dietary daily intake of fruits and vegetables were higher among women compared to men (65.9 % and 51.5 %, respectively). Men were more prone to drink soft drinks than women. However, 39.4 % of men and only 3.4 % of women drank soft drinks three or more days per week. The prevalence of overweight and obesity according to body mass index (BMI) was higher in this study. 34.4 % of men and 33.7 % of women were overweight and 15.10 % and 17.50% of men and women, respectively, were classified as obese. Elevated values of waist circumference were found in 35.35 % of men and 70.73 % of women.

Conclusion Women were more sedentary than men and had higher prevalence of abnormal waist circumference values.

Adequate dietary habits, regular practice of physical activities and avoidance of stressful situations are important components of a healthy lifestyle that are associated with decreased risk of overweight, obesity and its comorbidities (1-3). Nonetheless, sleeping problems, sedentary behavior (or physical inactivity), and lacking of leisure time, allied to a lower intake of fruits, vegetables, cereals, and fibers, as well as higher intake of fatty, fried and caloric foods, snacks, and soft-drinks have been associated with increased overweight and obesity risk in children and adults (3-7).

In the United States (US), the prevalence of obesity among adults is 33.80 %, and the overall prevalence of overweight and obesity is 68.0 %, 72.3 % among men, and 64.1 % among women (8). In Brazil, the prevalence of adult excessive body weight is 47.0 % for men and 39.0 % for women, and obesity prevalence reached 11.0 % for both genders (7). Furthermore, obesity has been also implicated in many important co-morbities such as hypertension, stroke, type 2 Diabetes mellitus, metabolic syndrome, chronic kidney disease, and some cancer types (6,9,10).

The objective of this work was to evaluate obesity and its associated lifestyle factors among a representative sample of adults from "Vale do Araguaia", Legal Amazon, Brazil.

We developed a descriptive transversal study in the Barra do Garças municipality. Over the course of four weeks, 99 adult men and 205 adult women were randomly selected in two supermarkets and two banks.

The inclusion criteria were agreement to engage into the research as well as capacity of understanding the questionnaire. Those people who did not agree to join the study were excluded.

The instrument included lifestyle factors according to the diabetes score risk (alcohol drinking, smoking, regular practice of physical activities, engagement on sedentary behavior activities such as television watching and use of microcomputer) and a food frequency questionnaire including the most frequent food groups and also unhealthy junk foods (11,12).

For characterization of overweight and obesity the body mass index (BMI=body mass (in kg)/height2 [in meters]) and the waist circumference (measured at the mean point between the last rib and the iliac crest) were measured with anthropometric tape (Sanny, model SN-4010, USA) and weight scale (Tanita, model TBF551, Japan).

Measurements were taken individually in a reserved room in each health unit, preserving the privacy of each study participant. The study was conducted in August and October 2011.

All participants received adequate information regarding the study's procedures and signed the free and clarified term and the study protocol that was approved by the ethical commitee on research of the "Hospital Universitário Júlio Müller" (Protocol no. 665/CEP-HUJM/09).

In terms of alcohol consumption, men also drank more than women (39.4 % and 30.2 %, respectively). In this regard, 13.1 % of men and 3.9 % of women were found to consume alcohol three or more days per week. The overall prevalence of alcoholic beverage consumption was 33.2 % in the sample.

Women appeared to be involved in more weekly leisure activities (dancing, singing and other) than men. However, they were engaged in most sedentary behavior activities, such as television watching and use of microcomputer (electronic games), than men (Figure 1). 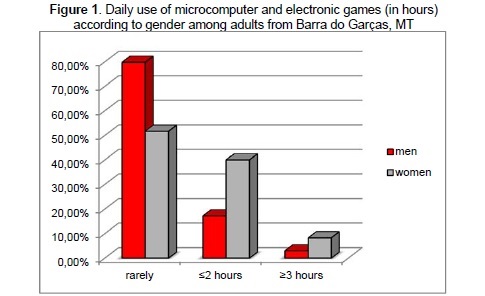 Dietary daily intake of fruits and vegetables were higher among women compared to men (65.9 % and 51.5 %, respectively) (Figure 2). 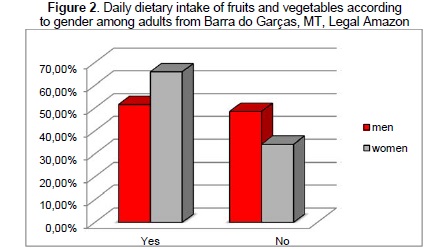 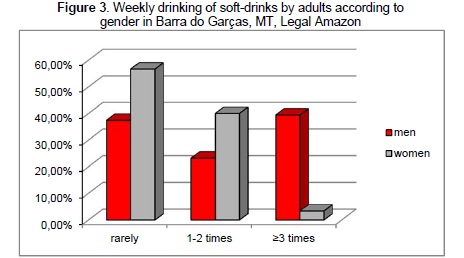 Fried foods were regularly consumed during one or two days per week, and women consumed those foods more than men (Figure 4). 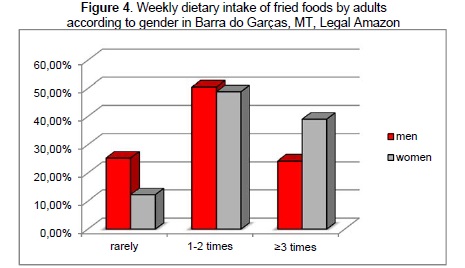 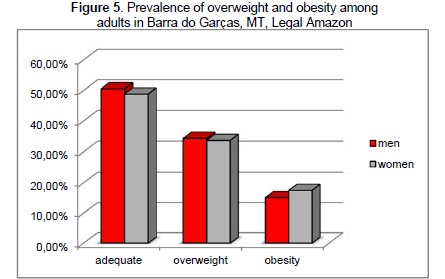 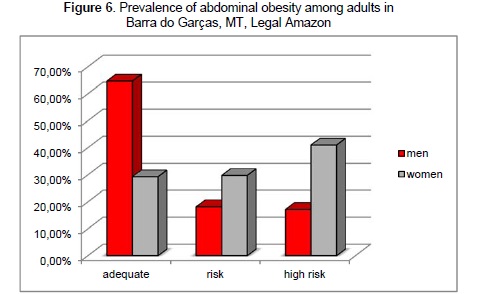 In this study, 22.2 % of men and 16.1 % of women were current smokers, which is in agreement with a study from Argentina (13). In a recent study within a small Brazilian city (14) the prevalence of smoking among men was similar to that found in the present study, whereas fewer women smoked (10.30 %) than in the current study. Considering alcohol consumption, the prevalence found in the present study (33.2 %) was higher than that reported by other authors in Brazil (15,16).

The prevalence of excessive body weight (overweight and obesity) according to body mass index was higher in this study (50.4 %). Analysing waist circumference values, women had increased cardiovascular, cerebrovascular, and metabolic risk than men. These results were similar to those found in a representative sample of adults from Sao Leopoldo, Rio Grande do Sul State (RS), Brazil (17). The excessive body weight in 26 Brazilian State capitals and in the Federal District was 44.4 % (49.6 % among men and 39.7 % among women) (18). However a probabilistic population study of adults in Lages, Santa Catarina State (SC), Brazil, found a prevalence of excessive body weight of almost 57.0 % (19).

In this study the dietary intake of fruits and vegetables was higher (61.2 %) than that reported by Figueiredo et al (22).

In the current study, daily dietary intake of fruits and vegetables for men (51.5 %) was higher than that reported by Coca et al (15) in Dourados city (40.0 %), Brazil, whereas it was similar among women in both studies. In a population-based study covering adults with 30 years of age or more in Ribeirao Preto, Sao Paulo State (SP), Brazil, women ate more fruits and vegetables than men (23), which corroborates data from this study.

Excessive intake of fats and fried foods had been associated with increased risk of obesity and the metabolic syndrome according to Brazilian, Spanish, and US studies (3,5,7,8,24).

In the present work, the dietary intake of sweets and candies three or more days per week was lower when compared to other studies in Los Angeles and Louisiana, USA, and in SP, Brazil (25, 26).

Consumption of soft drinks three or more days per week was higher for men than for women. Regular drinking of soft drinks strongly increases the risk of obesity, type 2 diabetes mellitus, metabolic syndrome, and cardiovascular disease (27,28).

In the present study, only 60.0 % of men and 42.4 % of women were involved in regular practice of physical activities during their leisure times. In a population-based study of 2 732 adults from Pelotas (RS), Brazil, sedentary behavior was the most prevalent cardiovascular risk factor (75.6 %) (29). Women were engaged in most sedentary behavior activities, such as television watching and use of microcomputer than men. Sedentary behavior, especially watching television, has been linked to increased frequency of daily consumption of soft drinks and dietary intake of snacks, fast foods, and high-energy foods (30,31). Television watching has been associated with increased risk of cardiovascular disease, type 2 diabetes mellitus, and all-cause mortality (32). Lower levels of physical activity are associated with an increased risk of breast, colon, uterine, and other cancers (33). Furthermore, regular practice of physical exercise also helps to decrease the risk of depression and affective disorders, type 2 diabetes mellitus, obesity, metabolic syndrome and osteoporosis (1-6,34).

In this study, more men were engaged on leisure-time physical activity than women. On the other hand, women were more prone to perform sedentary activities but they had more adequate eating habits than men. Half of the people had excessive body weight and one third of men and 70% of women had abdominal obesity •