Proportion of fever attributable to malaria in Colombia: Potential indicators for monitoring progress towards malaria elimination

Identify and characterize indicators to assess progress in terms of control and monitoring of malaria in endemic areas of Colombia and compare malaria elimination findings with those of countries in the same region.

Cross-sectional surveys were carried out in 2011 and 2014 in malaria endemic areas in Colombia, Pacific and Caribbean regions. A socio-demographic and a clinical questionnaire were applied to each participant; likewise, written and informed consents were obtained. Capillary blood samples were taken and examined through microscopic tests and rapid diagnostic test. A narrative systematic review was conducted to correlate malaria elimination in Colombia and in countries of the Amazon Region.

The sample consisted of 548 participants from the departments of Córdoba and Nariño, Colombia. The proportion of positive malaria cases was 3 % (17/548), in which the prevalence of malaria mixed infections was 47 % (8/17). Regarding fever, temperature over 38.0o C, its prevalence was 2.7 % (15/548). Only two febrile patients tested positive for the disease. Prevalence of asymptomatic malaria cases among all positive cases was 88 %.

Asymptomatic malaria cases, mixed infections and self-medication are the challenges that malaria control and elimination programs face. It is important to note that studies on subclinical malaria in the region are scarce. Endemic areas with dense populations and experiencing an increase in immigration levels are more vulnerable to malaria reemergence. Imported malaria cases impact the basic reproduction rate (Ro). Funding resources availability has impact on the sustainability of public health actions and the elimination of malaria in South America.

Malaria persists as the major global public health problems. Traditionally, solutions have centered on biological approach, such as treating the parasitic infection and vector control, without taking socio-economic and environmental factors into account. This paradigm has proved to be insufficient for advancing control strategies and progressive elimination. The main challenge has been early diagnose and prompt treatment. Unfortunately, failure treatment in clinical cases and adhesion to radical treatment affect the process, outcome and impact indicators of control programs.

Local malaria control program verified village with current evidence of autochthones cases. Each village was invited to participate and after writing consent the study was conducted. Sampling by convenience was done, and participants located in each information post with help of local leaders. Protocols of security for humanitarian mission were activated according to particular conditions. From each volunteer a capillary blood sample was taken one for a thick blood smear, and for Rapid Diagnose Test, RDT, manufactured by Standard Diagnostic Inc. Asymptomatic cases were defined as any person without symptomatology compatible to malaria, but showing a positive RDT. Fever was defined as any patient with more than or equal to 38,0 Celsius degrees according to WHO Guidelines. Treatment of malaria episodes: individuals with malaria infections were treated according to malaria guidelines of the National Control program in Colombia 2828. Panamerican Health Organization, Minister of Health Colombia, Instituto Nacional de Salud. Guía para la atención clínica integral del paciente con malaria. Organización Panamericana de la Salud OPS/ OMS. Convenio de Cooperación Técnica con el Ministerio de la Protección Social Nro 256 de 2009 y Nro 237 de 2010. [Internet]. Consulted: Consulted: http://www.paho.org/COL/2012 . Acceso octubre 4 de 2016.
http://www.paho.org/COL/2012... ,2929. OPS, Ministerio de Salud Colombia, Instituto Nacional de Salud de Colomba. Protocolo para la vigilancia en salud pública de malaria. Bogota, Colombia 2012.. In Latin America a case of malaria is defined as all patients with or without symptomatology and positive presence of parasites. The descriptive statistics and association were estimated using Stata 13. The level of significance was at 5 %.

The study was undertaken according to the principles of the Helsinki declaration and Resolution 8430 of the Ministry of Health of Colombia, 1993.The study was cleared by the Ethical Committee, of the Faculty of Medicine at the Universidad Nacional de Colombia. Informed consent was obtained from all study participants. For volunteers less than 18 years old, the parents or legal guardian authorized participation (Articles 23 and 24 of Resolution 8430). According to national norms, the investigation was classified of minimal risk (Article 11).

A total of 528 subjects were sampled. Table 1 shows the prevalence of positive cases, defined as infected with or without symptomatology.

The villages selected for the study experienced intense political unrest and had a high proportion of displaced populations, mainly in Cordoba, on rural areas. According to CODHES, Colombia recorded five million displaced people by 20133030. CODHES., ACNUR. Crisis Humanitaria en Colombia Persiste. EL PACÍFICO EN DISPUTA. Informe de desplazamiento forzado en 2012. http://www.abcolombia.org.uk/downloads/Informe_Desplazamiento_2012_La_Crisis_Humanitaria_.pdf: CODHES, 2013.
http://www.abcolombia.org.uk/downloads/I... . From field observations the self medication was confirmed. The consumption of herbal infusions to reduce fever is very common in all areas. In Tumaco, people prepare infusions of Cinchona Bark while all drug stores close to the temporary field station sold the tonic, “Arquin”, each 100 ml containing 0.566g of chloroquine. Given the limited diagnostic services in the area and the cost of transport to a well-equipped health center, most people with fever or malaria-compatible symptomatology take these available products.

Table 2 shows the demographic and clinical characterization of the detected malaria cases. Prevalence did not differ by sex or occupation. The findings suggest that P.vivax and mixed infections are a key public health problem in those areas. The age distribution of cases kept the historical epidemiology for these areas. The ages affected by the infection and disease are grouped between 15-45 yrs. However, 70 % of infected subjects were asymptomatic and the proportion of fever attributable to malaria was 42 %.

During the last 20 years, there is a slightly reduction of asymptomatic and the PAF. The population of San Francisco was in the middle of all actors in the armed conflict and additional surveys were not possible; however the other regions sampled keep similar epidemiological conditions and same socio-economic factors which affect Tumaco and the Pacific coast endemic areas.

Table 3 presents most relevant aspects of the malaria control program of the eight countries on the same Amazon Region where Colombia also share similar eco-epidemiological conditions. These findings suggest limited actions of surveillance and budget constraint. The case detection in some areas combine intensified active case detection. The activities are responsibility of the public sector, the review do not find the private health sector participation in most of the countries. The surveillance system in Colombia and other countries present data from years before 2013, there is not available data for more recent years. The surveillance system is not opportune and sensible in case detection. It is widely suggest levels of under report around 35 % 1515. Valero-Bernal M. Persistencia, resurgimiento y resistencia de la malaria en Colombia, periodo 1960-2004. Bogota: Universidad Nacional de Colombia; 2006..

The findings show that P. vivax malaria is still endemic in Cordoba, while P. falciparum continues to be the main problem in Tumaco. The frequency and distribution of P. vivax and mixed infections indicate a weak effectiveness of malaria treatment in terms of prescriptions, delayed access and limited supervision by health system. As other authors refer, Plasmodium vivax represents de 80 % of clinical malaria cases in Latin America and the Caribbean Island, meanwhile Plasmodium falciparum remains as a main cause of mortality 6 deaths per 100 000 inhabitants 3232. Bardach A, Ciapponi A, Rey-Ares L, Rojas JI, Mazzoni A, Glujovsky D, et al. Epidemiology of Malaria in Latin America and the Caribbean from 1990 to 2009: Systematic Review and Meta-Analysis. Value in Health Regional Issues. 2015;8:69-79.,4343. Valero-Bernal M. Malaria persistence, resurgence and resistance in Colombia 1960-2004, taking tinto account socio-political, economic and cultural dimensions and their implications for control programmes. Bogota: National University of Colombia; 2006.

Policies and strategies for moving from malaria control to elimination require adequate planning to account for transmission levels and for the structure of health and social systems. Identification of asymptomatic and imported cases is key elements for malaria control planning. Assessing surveillance capacity and selecting relevant indicators for surveillance and monitoring are key preparatory issues that help to understand how the health and social systems function in a given place. Endemic countries must work in redefine and unified clinical malarial guidelines and protocols for malaria transfusion at both rural and urban areas. It is important establish algorithms and diagnose criteria between semi immune population and immune populations from non-endemic and endemic regions. The impact and cost of malaria treatments due to inadequate management and implementation could be reduced by additional research to identify state of drug resistance and permanent sentinel surveillance systems4444. Najera J, Liese B, Hammer J. Malaria. Disease Control Priorities in Developing Countries. 1993.,4545. Barlow R, Grobar L. Cost and benefits of controlling parasitic diseases. 1986..

The monitoring and evaluation of strategies of malaria elimination must be permanent. Definition of what would contribute to forecast outbreaks and epidemics. The early detection of clinical failures in treatments will reduce the cost of changing treatments.

These results are consistent with previous findings from other authors on the same region 1111. Mabunda S, Aponte J, Tiago A, Alonso P. A country-wide malaria survey in Mozambique. II. Malaria attributable proportion of fever and establishment of malaria case definition in children across different epidemiological settings. Malaria Journal. 2009;8(1):74.,4848. Smith T, Schellenberg JA, Hayes R. Attributable fraction estimates and case definition for malaria in endemic areas. Statistic in Medicine. 1994;13:2345-58.,4949. Armstrong Schellenberg JRM, Smith T, Alonso PL, Hayes RJ. What is clinical malaria. Finding case definition for fields research in Highly endemic areas. Parasitology Today. 1994;10(11):439-42.. However, it must be noted that the proportion of fever attributable to malaria appears stable at around 39-42 %. The degree of self-medication in some areas remains an important challenge to national efforts towards developing effective surveillance systems (SIVIGILA and INVIMA)

The findings of this study have implications on malaria elimination program. Currently, a malaria case is defined as any case that tests positive for parasites by thick blood smear and/or RDT. Presently, clinical cases are detected by passive case detection (PCD). Active case detection has been reduced due to costs, such as those associated with transport to endemic areas. In Colombia, the priorities are: (i) to develop strategies for surveillance-response systems adapted to a given endemic area and (ii) to adapt new strategies for primary and secondary preventive actions which consider inter sectorial partnerships.

The systematic narrative study and fieldwork show how the evidence between countries varies. There is not enough temporal and spatial information to indicate the real status of malaria elimination and pre elimination efforts in Latin America, mainly in the Amazon region. Any attempts to discuss progress towards malaria elimination will first have to elucidate and define parameters for statistically significant comparisons. Mathematical models offer a way to predict the value of progress indicators, while related informatics systems can help to evaluate the impact of elimination and control efforts considering variables of place, time and person. Tracking these epidemiological markers from infection to illness, plus setting a new threshold of fever, must be evaluated in both the short- and long-term to really have an impact on the malaria elimination strategy and redefine new programs. Finally, sentinel surveillance systems to measure and establish the state of native cases versus imported is also required between countries. The weekly report must be mandatory to forecast epidemics and prevent early presence of imported cases and avoid the malaria reintroduction in areas with Reproductive Rate close to Zero.

This research was supported by the Swiss Tropical and Public Health Institute and the Universidad Nacional de Colombia, Faculty of Medicine. We are in debt to Professor Andy Hall of LSHTM for his preliminary comments. We particularly thank the study participants from these endemic regions for their understanding and contribution. Their willingness to participate without any remuneration and in spite of their precarious living conditions is greatly appreciated. We are in debt to Prof. Fabio Zicker, FIOCRUZ, who read this document and made some useful critiques and commentaries. Thanks to Ms. Amena Briet because her dedication and effort with the English edition. 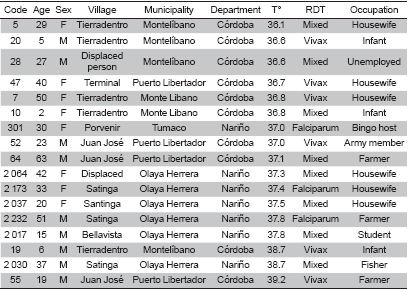 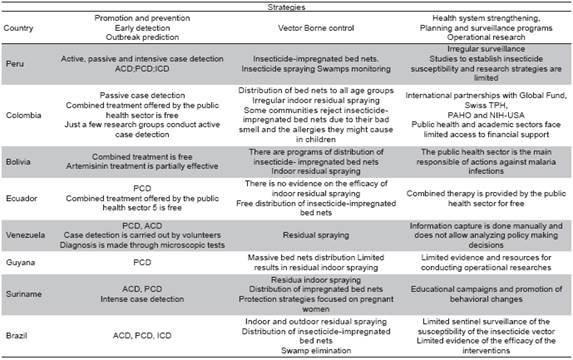