Some data have already been published on the anophelines of the subgenus Kerteszia in the Ribeira Valley region of S. Paulo State, Brazil (Forattini et al.4, 1993). These mosquitoes are regarded as local malaria vectors in a region which belongs to the Atlantic Rain Forest System. Nevertheless, the factors recognized as determinants of their vectorial capacity are not yet fully known. In the above-mentioned paper, synanthropic and blood-seeking parity patterns were described. The results there reported focused mainly on Anopheles cruzii and An. bellator, the former appearing as the dominant species, both in indoor and outdoor human bait catches. At the same time, information as to general parity conditions and endophagy parameters were obtained.

The length of the gonotrophic cycle, the time between blood meals, is recognized as a relevant transmission factor. As it is environmentally dependent, there is some reason for positing the hypothesis that mosquitoes might have different life spans in different places and/or seasons that would have a bearing on malaria transmission potential. Therefore, age-grading studies are appropriate in the attempt to measure the effects of these external factors (Clements1, 1992). Also, by monitoring the age-composition of blood-seeking mosquitoes it should be possible to gather valuable data about the regional potential for malaria endemicity.

A further study, described below, focused on another area in the same region and allowed us to observe the influence of the local environmental on mosquito behaviour by a comparison with the previous study. Parity, seasonal abundance and biting cycle of these species were assessed and the results are presented here.

The present study was conducted on the "Sítio Gentil" (Gentil Farm), the localization of which is given in the map in Figure 1 (24o79' S and 47o66' W). It is in Cananéia County on the northern shore of the "Mar de Dentro" (Inner Sea) opposite Cananéia Island. The whole area is recognized as a natural undisturbed ecosystem (Hannah et al.10, 1994). The environment is representative of the "Mata Atlântica" (Atlantic Rain Forest) covering the slopes of the regional Paratiu Mountain chain that in turn belongs to the "Serra do Mar" (Coastal Mountain Range) system. The anthropic environment is represented only by scattered dwellings along the Cananéia-Pariquera Açu road, usually located near the forest but without intensive agricultural activities. Facing the study area there is the large "Ilha Comprida" (Long Island) estuary system consisting of several channels, one of them being the "Mar de Dentro", where extensive mangrove vegetation (Rhizophora, Laguncularia) grows in salt marshes. In front of these there are extensive low-lying islands bordering the sea shore in the form of strips, largely covered by woody vegetation called "restinga" (wooded coastal lowland). Mosquito catches were undertaken in the local environment both in a house where the indoor and outdoor catches were made, as well as those which were carried out inside the nearby natural forest (Figs. 1 and 2). 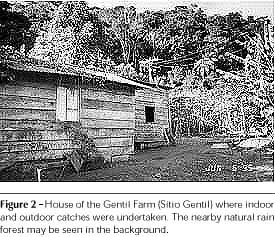 Biting activity was monitored fortnightly using two human bait collectors working simultaneously, one of them placed indoors and the other outdoors. Adult mosquitoes were caught as they landed on the collector, during a two-hour period starting at sunset. Due to seasonal variation, daily crepuscular data were obtained from the Nautical Almanac tables for local time. Mosquitoes were collected in this manner from January to December 1994.

For purposes of comparison, other adult collections were undertaken at the same time inside the natural forest environment between 17.00 and 20.00 hours by the use of a Shannon trap. It was necessary to establish this schedule, for operational reasons, so as always to include the sunset. Shannon trap collections were routinely performed from June 1993 to April 1995 thus prior and subsequent to the domiciliary collections.

Randomly sampled adult females from the domicile collections were dissected to determine the state of the ovaries and of the follicular stalks. Parity conditions were determined and interpreted in accordance with the traditional technique (Detinova2, 1962). Ovarian follicle stages were identified according to Christophers' classification (Clements1, 1992). Due to gonotrophic discordance, nulliparous females reaching only stage II were considered as "pre-gravids"(Gillies6,7, 1954, 1955). Besides these specimens, resting adults collected by the aspiration technique inside the forest environment were also dissected (Forattini et al.5, 1993). Recently a new model of mosquito oogenesis has been suggested based on original morphological and functional observations (Sokolova11, 1994). This model is still subject to discussion and not yet universally accepted.

W) was used as originally described (Haddow8,9, 1954, 1960). For the collections with the Shannon trap the number of mosquitoes was expressed as an hourly arithmetic mean (

). Macroclimatic data concerning rainfall and temperature levels were obtained from the records of the Cananéia Meteorologic Station belonging to the "Instituto Oceanográfico" (Oceanography Institute) of the University of S. Paulo (Fig. 3).

A total of 24,091 Anopheles (Kerteszia) females were obtained, 7,561 by means of the human bait collections and 16,530 through the use of the Shannon trap, as follows:

As a general yearly rainfall pattern, a wet and a dry period are evident. As shown in Figure 3, the heaviest rainfall occurs from October to April thus distinguishing the wet season while May to September correspond to the dry one. Both species were collected during throughout the period but, as was to be expected, with greatest abundance during the wet season, as shown by Figures 4 and 5.

From the human bait collections, An. bellator's indoor presence (81.1%) was higher than that of An. cruzii (18.9%) as a proportion of the total number of specimens caught (Table 1). Comparing both the indoor and outdoor mosquitoes catches, they varied significantly (x2 = 33.39; P < 0.00000001). Thus, An. bellator was at least four times more frequent than An. cruzii in the dwelling house environment.

Through hourly arithmetical means it was possible to compare the results obtained under domiciliary conditions, as a whole, with those of the primitive natural forest (Tables 1 and 4). The comparisons of the means showed An. cruzii as predominant in the natural environment, with an annual mean of 60.8 whereas that for An. bellator was 45.1. With respect to the domiciliary environment, An. cruzii's annual mean was 17.3, thus differing significantly from bellator's (x2 = 197.97; P < 0.00000001).

Data about age composition were obtained through the dissection of 453 An. cruzii and 1,552 An. bellator females collected on human bait (Tables 2 and 3). The overall parous (with follicular stalk dilatation) rates were 31.6% for the former and 27.4% for the latter species, with no statistically significant difference between them. As regards the capture sites, indoor parity rates were 27.9% for An. cruzii and 22.9% for An. bellator, while the outdoor ones were 32.7% and 29.2%, respectively. That parous distribution was significant only for An. bellator (x2 = 6.20; P = 0.012772).

Regarding the resting adults collected by aspiration inside the natural forest environment, 117 females were dissected with the following results (abbreviations as in Tables 2 and 3):

Thus the parity rates found were 17.0% for An. cruzii and 41.4% for An. bellator. Compared to human bait, both species showed significantly different rates (x2 = 7.52; P = 0.006116 and x2 = 7.54; P = 0.006040, respectively). However, the two techniques may not be comparable because of sample size and because the host seeking population subset might be different from the overall population.

As the numbers of females to be dissected were randomly chosen, it was not possible to reach any consistent conclusion about seasonal parity distribution. However, the data suggest a wet season parity increase for both species.

Parity was predominantly represented by the uniparous condition, i.e., the presence of only one follicular stalk dilatation. Nonetheless, about 5.0% of the females dissected showed nulliparous condition with ovaries developed at Christophers' Stage III. That total consisted of 20 An. cruzii and 60 An. bellator, thus showing that even without previous eggs laid, at least one blood meal had been taken. Females landing on human bait should be considered as blood-seeking. Thus, adding these Stage III nulliparous specimens to the parous ones, it was possible to establish that 34.9% of the An. cruzii and 31.1% of the An. bellator females dissected were taking at least a second blood meal.

It is recognized that Kerteszia anophelines are dominant in the primitive Atlantic Rain Forest ecosystem of Southern and South-Eastern Brazil. They are considered as regional malaria vectors, particularly An. cruzii and An. bellator. Observations made in the Ribeira Valley showed that even with exophilic behaviour their presence in human settlements is evident. Despite this, they have no tendency to rest inside dwellings (Forattini et al.3, 1990). In earlier research carried out in a neighbouring area named "Sítio Andrade" (Andrade Farm), An. cruzii was the most abundant species caught on human bait. At the same time, An. bellator showed greater endophagy than An. cruzii (Forattini et al.4, 1993). In the present research, a similar pattern was found, with An. bellator being four times more frequent in dwellings than An. cruzii. Nevertheless, the collections undertaken inside the forest with the Shannon trap, showed a predominance of An. cruzii, although An. bellator's presence was more significant than that obtained at the "Sítio Andrade" (42.6 and 7.7%, respectively). Thus, judging from this evidence, it seems that An. cruzii, although predominant within the natural environment, do not have the same predominance in the anthropic one where An. bellator is more numerous. The higher adult density of this species, compared with that previously obtained at the "Sítio Andrade", may reflect, at least partially, the influence of the estuary system. This is mainly represented by the low-lying islands the covering vegetation of which consists mainly of scattered woods of stanted trees called "restinga". As is known, An. bellator prefers bromeliads that are more exposed to the sun to those that grow inside the woods on the coastal lowland (Veloso et al.12, 1956).

The seasonal patterns followed what is already expected in the Neotropical region. The levels of greatest abundance were observed during the wet season, as the graphs in Figures 4 and 5 show, by the monthly distribution of Williams' means for human bait and the arithmetical hourly ones for Shannon trap collections. There was agreement between the variations, both in the domiciliary and natural environments.

The age compositions obtained through dissections of landing females are certainly valuable indications of previous blood meals. Therefore, the data on the parity proportions may be considered as an assessment of the vector capacity. Regarding the indoor and outdoor collections, no significant difference was found for An. cruzii, differently from An. bellator which showed higher parity rates for the outdoor catches. The greater abundance of this species on the Gentil Farm as compared with the Andrade Farm (Forattini et al.4, 1993) may explain the differences recorded between the two sites. Anyway, the presence of III and further of Christophers' Stages in nulliparous females shows that more than 30.0% of the blood-seeking specimens of both An. cruzii and An. bellator had taken at least one previous blood meal. Thus, this strongly suggests that there is the necessity for multiple blood feeding for a first clutch of eggs to be developed, i.e., as a consequence of a gonotrophic discordance, at least initially.

In conclusion, An. bellator keeps its higher endophily level as compared with that of An. cruzii. Otherwise, this latter mosquito mantains greater abundance within the natural environment, particularly in the rain forest covering the mountain slopes. In addition, there is evidence that no initial gonotrophic development occurs but that about 30.0% of blood-seeking females of both species had already taken at least one blood meal.

6. GILLIES, M. T. The recognition of age-groups within populations of Anopheles gambiae by the pre-gravid rate and the sporozoite rate. Ann. Trop. Med. Parasitol., 48:58-74, 1954.

8. HADDOW, A. J. Studies on the biting-habits of African mosquitoes and appraisal of methods employed, with special reference to the twenty-four-hour catch. Bull. Entomol. Res., 45:199-242, 1954.

9. HADDOW, A. J. Studies on the biting-habits and medical importance of east African mosquitoes in the genus Aedes. I - Subgenera Aedimorphus, Banksinella and Dunnius. Bull. Entomol. Res., 50:759-79, 1960.