Diagnostic tests for American tegumentary leishmaniasis were performed on blood samples of patients living in two endemic municipalities in the state of Pernambuco, Northeastern Brazil. DNA was extracted from 119 samples and used as template for polymerase chain reaction (PCR) analysis. The tests used primers specific for the kinetoplast mini-circle DNA (kDNA) of Leishmania braziliensis, a species circulating in Pernambuco, which amplify a 750 base pair target sequence. In total, 58 subjects (48.7%) showed positive PCR amplification and 61 (51.3%) were negative. Of the PCR-positive samples, 37 (@ð64%) were from treated, lesion-free subjects. In conclusion, the PCR technique is efficacious at identifying Leishmania DNA in biopsy and venous blood samples.

American tegumentary leishmaniasis (ATL) is a zooanthroponosis endemic in the tropics and neotropics, which increases by roughly 1.5 million cases every year worldwide.4 This disease is characterized by a series of clinical manifestations ranging from small nodules to destruction of the mucosa.4 In Brazil, leishmaniasis can be found in all of the country's macroregions, with high annual incidence.ª In the Brazilian Northeast, the number of registered cases is significant, accounting for 30.5% of all cases in the country.ª In the Northeastern State of Pernambuco, the case detection coefficient was 9.6 in 1990 and 4.2 in 2008.ª,

Although different species of Leishmania are involved in keeping ATL endemic in Brazil, Leishmania braziliensis is the predominant etiological agent. Prior studies from endemic areas of Pernambuco have shown that parasites isolated from patients and rodents with this leishmaniasis were of the L. braziliensis species.5

ATL is an endemic health problem in the Brazilian Northeast. There is therefore a need for a rapid and precise diagnostic test, capable of identifying infected individuals and detecting the presence of parasites in individuals considered as cured, in order to prevent relapse, maintenance, or even expansion of the endemic disease. A technique of greater effectiveness and sensitivity than other strategies used for diagnosis is the polymerase chain reaction (PCR).3

Given the importance of accurate diagnosis, the aim of the present study was to verify the hematogenous dissemination of leishmania and its detection in peripheral blood, including among patients considered as clinically cured.

We chose two endemic municipalities in the State of Pernambuco, Northeastern Brazil: Cabo de Santo Agostinho, which, at the time of sample collection (2004), was undergoing a surge in ATL; and Triunfo, which had been through an ATL surge in 2001. Patients were selected from among the primary health care units of each municipality. We collected 63 venous blood samples from subjects from Cabo and 56 from subjects from Triunfo. Venous blood was chosen given the possibility of hematogenous spread6 and to make sample collection more comfortable for the patient. Venous blood samples from non-infected subjects, living in non-endemic areas and with no history of ATL, as well as blood free of parasite DNA were used as negative controls for the assay.

DNA was extracted using a commercial kit (DNAzol BD Reagent®, Life Technologies) specific for blood samples, according to the instructions provided by the manufacturer. This protocol yielded 20-40 ¼g DNA per ml of total blood. DNA was stored at -20ºC.

PCR reactions were prepared using a commercial kit (Ready-to-go PCR Beads®, Amersham Biosciences), the components of which are lyophilized. To the contents of the kit, we added 7 ¼l DNA, 16 ¼l water, and 1¼l (20 pmoles) of each primer, to a final volume of 25 ¼l. We used primers B1 and B2,1 which amplify a 750-base pair sequence of leishmania kDNA. The primer sequences are as follows:

All reactions included positive (L. braziliensis - MHOM/BR/1975/M2903) and negative controls (DNA from a non-infected subject; no DNA). PCR reactions were carried out on a thermocycler (Biometra®) using the following program:1

The amplification product was analyzed by electrophoresis on a 1.5% agarose gel, stained with ethydium bromide, visualized under ultraviolet light, photographed using image capture equipment, and stored digitally in an electronic file.

All subjects signed a term of consent approved by the Ethics Committee of the Universidade Federal de Pernambuco (Protocol no. 233/2002-CEP/CCS).

In total, 95 patients - 40 from Cabo and 55 from Triunfo - had fulfilled the criterion for cure (reepithelization of the lesion).

The results of three PCR-positive and three PCR-negative patients are presented in the Figure, as well as the positive and negative controls for the samples of the investigated areas. 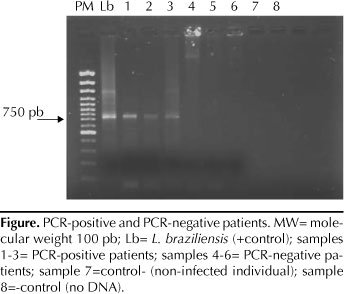 Given reports of hematogenous dissemination of leishmania and the detection of the parasite in peripheral blood,6 the present study showed that it is possible to use venous blood to diagnose ATL, since blood can be obtained from routine hemogram collections, using minimal amounts of blood (0.5 to 1 ml)

The PCR technique was chosen for series of reasons. The first was that patients reported discomfort during the collection of lesion biopsies. The second reason was the optimization of the likelihood of finding parasite DNA in the blood of an infected individual using primers specific for leishmania kinetoplast minicircle DNA (kDNA), which is present at 10 to 50 thousand copies per cell. The third reason was the speed of diagnosis, which does not depend on inoculation of animals or on parasite culture, both of which are time-consuming and do not ensure results or show risk of contamination, respectively. PCR testing can be completed in a few hours, and a considerable number of samples can be processed in parallel.

Finally, studies using biopsies showed that PCR was capable of detecting leishmania DNA in samples where techniques such as imprint and histopathology had yielded negative results.2 Biopsy PCR also showed the presence of L. braziliensis DNA in subjects considered as cured for over ten years.

Despite the clinical remission of the lesion, PCR can remain positive for many years thereafter. This supports the use of PCR as a tool for verifying and analyzing the presence of parasite material. This is confirmed by our finding that, of 93 lesion-free subjects, 37 (39.8%) were found to be PCR-positive, which indicates the presence of leishmania material. Of these, 28 were from Cabo and nine were from Triunfo; all of these had been treated, and the Triunfo patients had been considered as cured for at least two years.

Mendonça et al2 prepared parasite cultures from 32 lesion biopsies and identified L. braziliensis DNA in three patients considered as cured for six years. These authors2 argued that the presence of DNA can occur as a survival strategy of the parasite, related to mechanisms such as modulation of host cell antimicrobial activity, cytokine synthesis or inhibition, deterioration of T cell activation, and parasite retreat into non-immune system cells. Another explanation could be the greater likelihood of exposure to the parasite - and consequent reinfection - among clinically cured individuals from endemic regions.

In conclusion, the PCR technique was shown to be capable of identifying leishmania DNA, not only in biopsy material but also in venous blood.